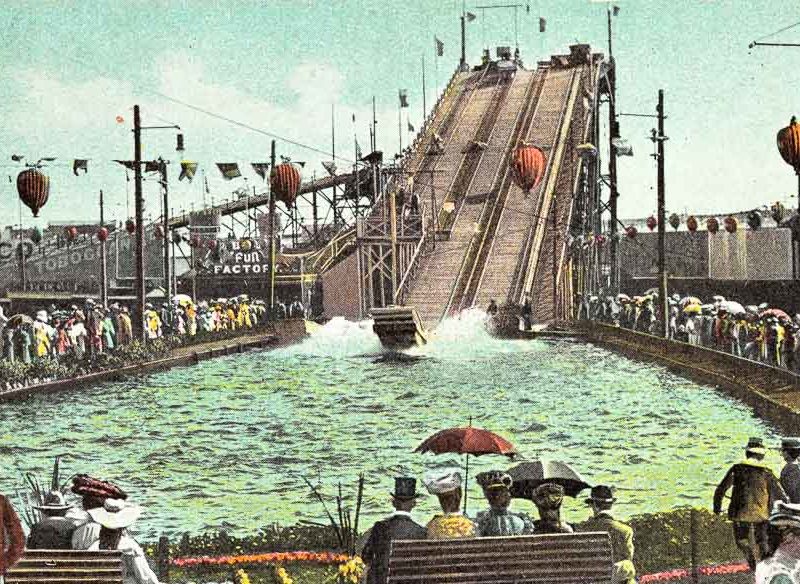 Edwardian Melburnians used to scream with delight as they hurtled down a huge waterslide now long gone, but it’s a diversion that is just as popular a hundred years on, finds Dan Down.

Not much has changed in Melbourne since the Edwardian era. Men still sport swallow tattoos, curly moustaches and beards (you may even spot the occasional bowler hat in some ’burbs), and there still appears to be a healthy desire to hurl oneself down a waterslide, all in the name of mindless fun.

You see, the Edwardians were mucking about like this a century ago.

Clearly pastimes of poetry recitals and taking the sea air weren’t quite doing the job in terms of adrenalin, so back in 1906 parties of friends sat on little skiffs and hurtled down a colossal wooden ramp into a large man-made pond before a crowd of genteelly dressed onlookers.

It was called Shooting The Chute and took place on a site called Prince’s Court, an entertainment area in the vicinity of today’s Arts Centre on St Kilda Road.

Wirth’s Olympia could also be found there, the only permanent circus site in Australia right up until the 1950s.

Other attractions included a toboggan ride, an open-air theatre, Japanese teahouse, miniature railway and (probably because things were getting a bit tame again) a rifle range.

The wooden structure of Shooting The Chute is long gone, but the area is still the cultural heart of the city, drawing exhibitions, artists and performers from all over the world.

And in true Melburnian style, the old attraction has been memorialised in bar form at The Waterslide, Southbank, with an interior that emulates a bygone era and old photos and posters of Edwardians getting their kicks on the once famous ride.