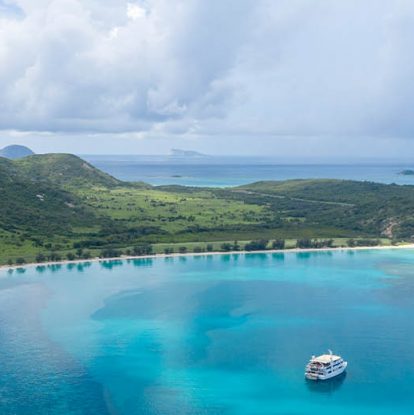 There are ample ways to explore the Great Barrier Reef on a visit to Australia, but nowhere offers a reef experience like Lizard Island, the only luxury resort situated on this Natural Wonder of the World.

In partnership with Lizard Island

Gliding through turquoise-hued water aboard our private motorized dinghy Liz 2 we arrive at Watsons Bay: there’s not a soul here, of the humankind that is, so we drop anchor. It is exactly as the staff described when we set off on our private excursion from Lizard Island resort; secluded and serene. Once the engine is off, we are greeted with a meditative soundtrack of gentle waves lapping against our dinghy. It’s a balmy 80°F and the pure white sandy beach, surrounded by rocky granite hills blanketed in low-lying scrub, is aglow in the morning sunshine. 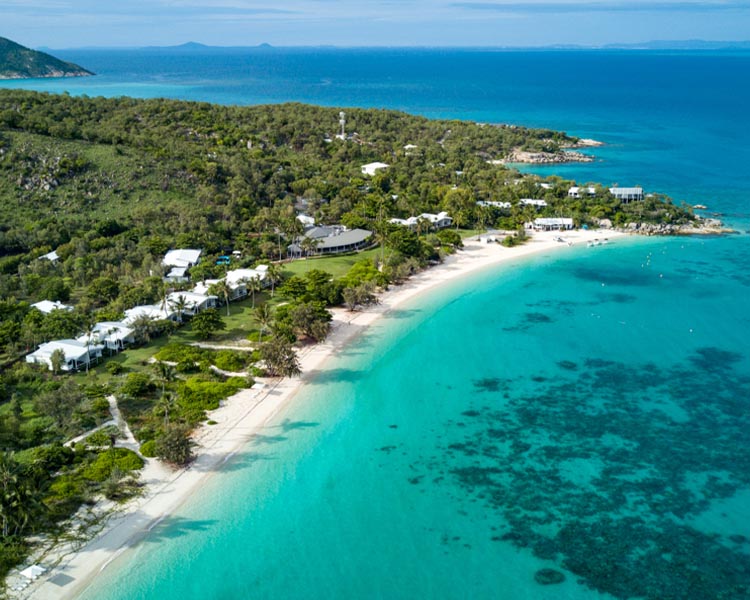 You will be greeted by the white sandy beaches surrounded by rocky granite hills on Lizard Island.

Lizard Island is a picture of contrasts: a stark desert-like landscape covered in rocky outcrops and grasslands hugged by translucent water that transposes into a tie-dye of blues. The island has a unique location, at the center of intricate inner and outer reef systems of the Great Barrier Reef, composing a diverse and colourful ecosystem of corals, a kaleidoscope of tropical fish – around 1500 species, to be more precise – and other marine animals such as dolphins, turtles and rays. 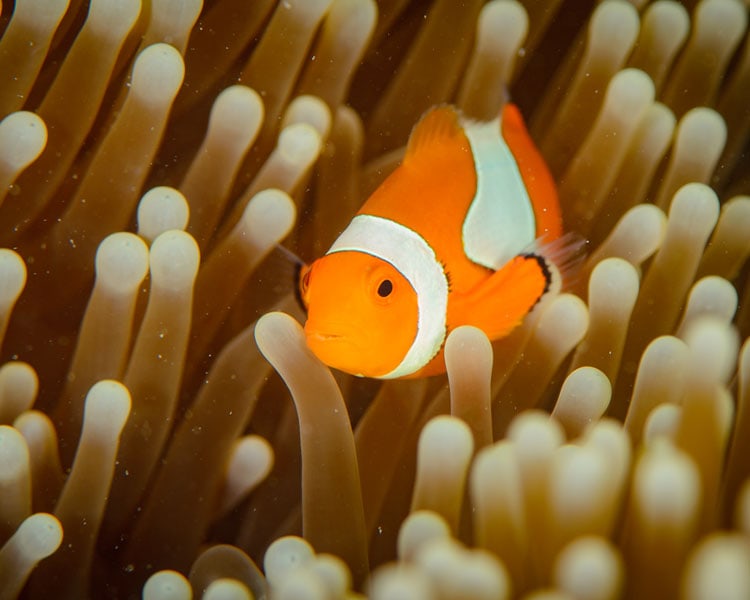 See a kaleidoscope of tropical fish thriving in a diverse and colourful ecosystem of corals.

To experience this natural wonder, we merely need to step out of our luxury villa, stroll along tropical plant-lined boardwalks and over sugar-white sand. It’s an absolute privilege, given the fact that most other reef explorations involve a long boat trip with hordes of other people. 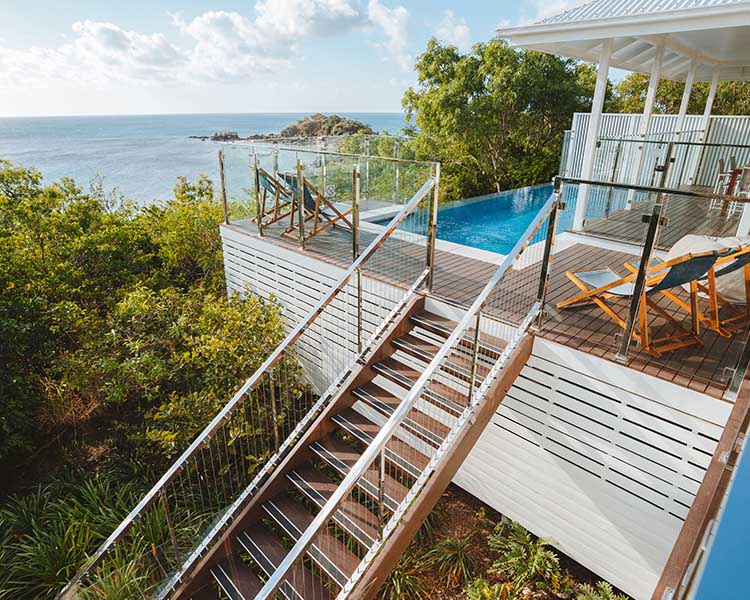 Simply step out of your luxury villa to experience this natural wonder.

Where else on the Great Barrier Reef do you have such immediate access to its glorious coral gardens and wondrous marine life while basking in luxury at the end of the day? (The answer is nowhere.)

The island itself is remote, sitting pretty some 150 miles north of Cairns. To get here, we take a one-hour flight over the Great Barrier Reef, which is hardly an arduous journey. Below us we witness the ocean changing from shades of sapphire to aqua to sapphire again, speckled by vast coral reefs, white beaches, and uninhabited islands of lush green. We agree it’s the most beautiful airport transfer we’ve taken. 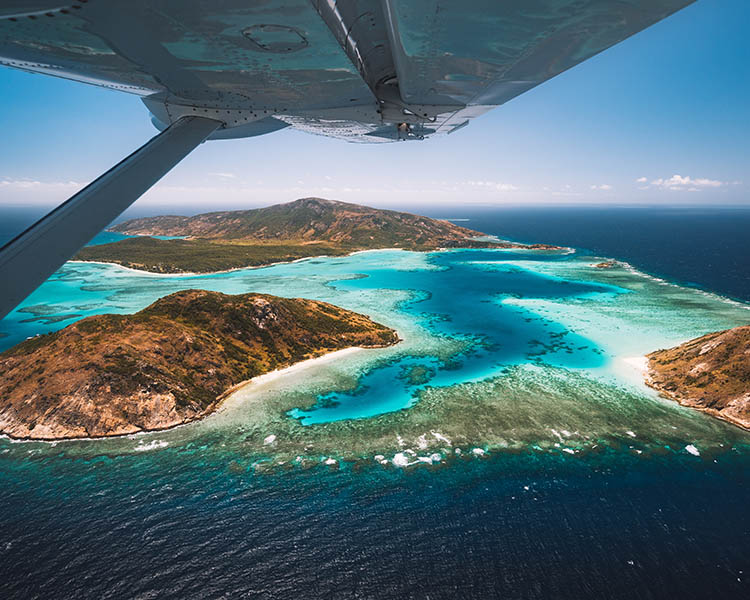 Witness the ocean changing from shades of sapphire to aqua.

We enjoy our first snorkeling foray at the extraordinary Clam Gardens. The giant clams here can grow up to seven feet in length, weigh an average of 440 pounds and can have a lifespan of 100 years. We snorkel above, admiring their mantles, some neon blue and royal purple in colour. Sedentary sea cucumbers and sapphire-blue starfish cling to rocks, while schools of skittish fish and a fast-moving stingray dart among the coral. A pouty giant sweetlip emperor fish swims by us nonchalantly.

Luxury yacht excursions are also available to world-famous dive sites, such as the Cod Hole where you can mingle with friendly potato cod and grey reef sharks; Dynamite Passage, which has a dramatic drop-off and some of the best coral of the sites; or Snake Pit where you can swim among sea snakes. 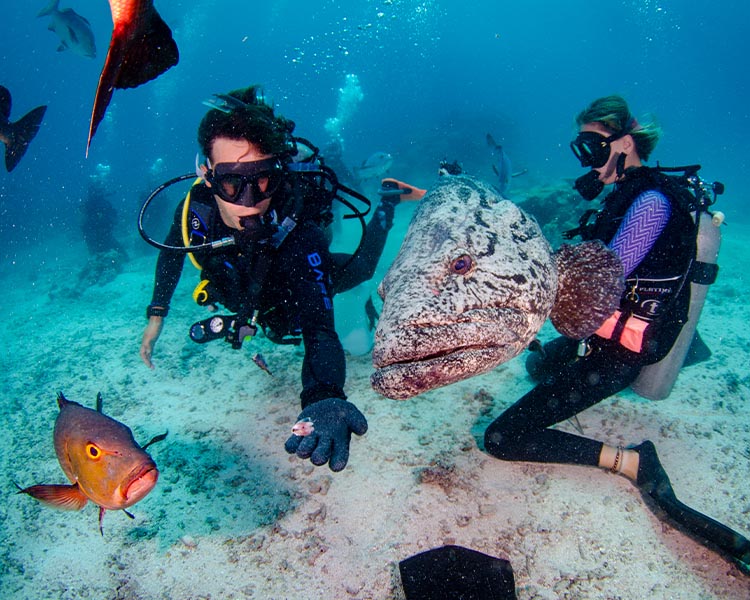 Back aboard Liz 2, we enjoy a delicious picnic lunch that has been thoughtfully packed by staff before zipping around to Casuarina Beach, the playground for the island’s resident green sea turtles. I audibly gasp when we spot a dark watery figure only a few feet away from where we swim. A few moments later, the adorable head of a green sea turtle emerges, its mottled markings shimmer in the sun. It is the stuff of bucket-list dreams. 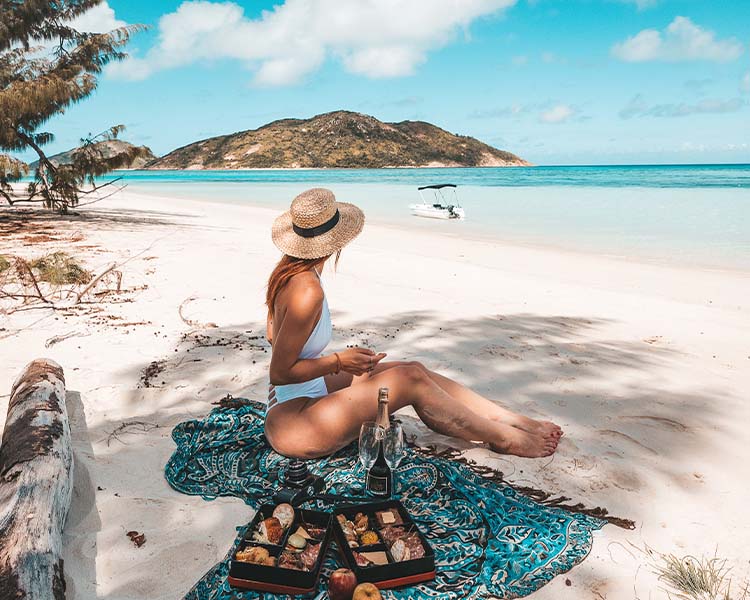 Enjoy a delicious picnic lunch that has been thoughtfully packed by staff before zipping around to on of the 24 different beaches on Lizards Island, like Casuarina Beach (photo).

Nearby our turtle encounter is the world-renowned Lizard Island Research Station. Owned and operated by Australian Museum, the station was established in 1973 to facilitate coral reef research and education. Working closely with the research station, the resort has several sustainable practices in place, with the health of the reef underpinning these efforts.

While many areas around Lizard Island are pristine, some have been affected by coral bleaching and past cyclones, while many are also in stages of regeneration. For example, a recent coral spawning event off the coast of Cairns in November 2021 signals new life for the reef and demonstrates its ecological functions are still working, according to Gareth Phillips, principal marine scientist at Reef Teach. Guests can learn more on an insightful tour of the station (available twice weekly). 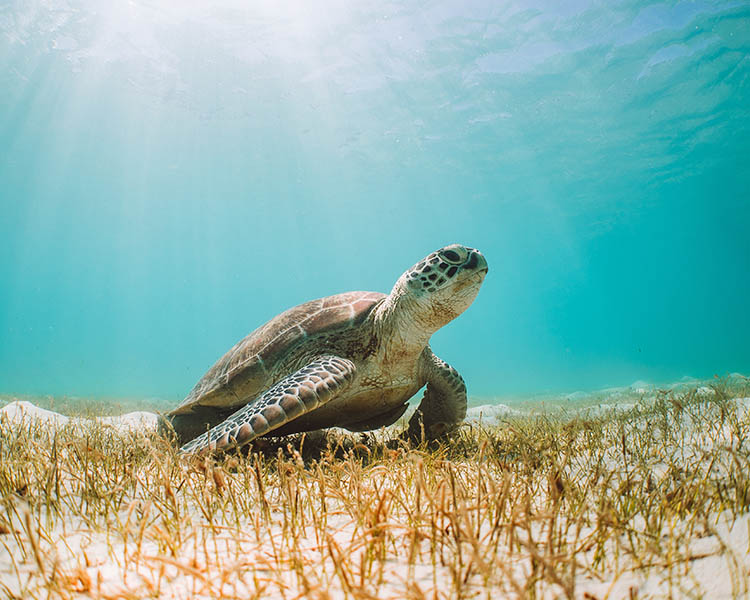 The green sea turtle’s mottled markings shimmer in the sun.

Known as Jiigurru by its Traditional Owners, the Dingaal people, the island is also rich in history and cultural meaning. It was used as a place for sacred ceremonies and evidence of this can be found in shell middens. Learn more about its Indigenous and European history on a guided walk to see the local flora and fauna, such as the island’s namesake, the yellow-spotted monitor.

The island is also home to more than 40 species of bird throughout the year, such as the olive-backed sunbird, rainbow bee-eater, pheasant coucal and rose-crowned fruit dove. It is also an important breeding ground for seabirds, including the endangered beach-stone curlew.

The best of nature and luxury

Early one morning we challenge ourselves with a steep trek to the panoramic summit of Cook’s Look, the tallest peak of the island at almost 1200 feet. And, in the afternoon, we make our way to Essentia Day Spa to balance out nature with nurture. Ninety exquisite minutes later, I emerge from the Rainforest Revival Ritual (a body scrub, full body massage and foot massage) completely invigorated. 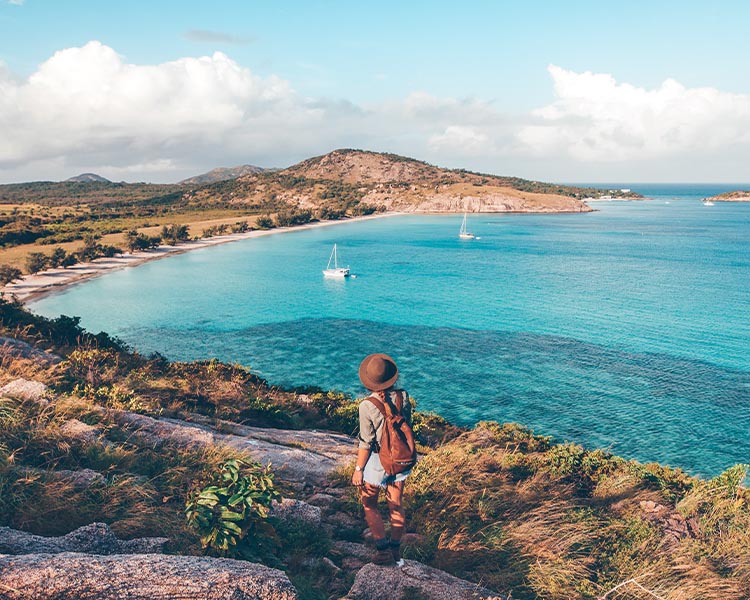 Trek to the panoramic summit of Cook’s Look.

Sun-kissed and hearts full, each day’s end is spent in our beautiful villa. Designed in neutral tones and bathed in natural light, the accommodation is the epitome of understated luxury. We don’t want for anything during our stay, as dining, a selection of fine wine, beer and spirits, fully-stocked mini bar, and use of the motorized dinghy, stand-up paddleboards and sea kayaks is all included.

However, as a special treat, we book a Sunset Beachside Dining experience for our final night. Beneath a private beach pavilion, with sandy feet and a refreshing sea breeze, we indulge in a delectable seven-course degustation with matching wines. The personalized menu was decided over a chat with the chef that morning. Each thoughtfully prepared dish wowed us just as much as the uninterrupted views of the sun setting on this unforgettable stay at Lizard Island. 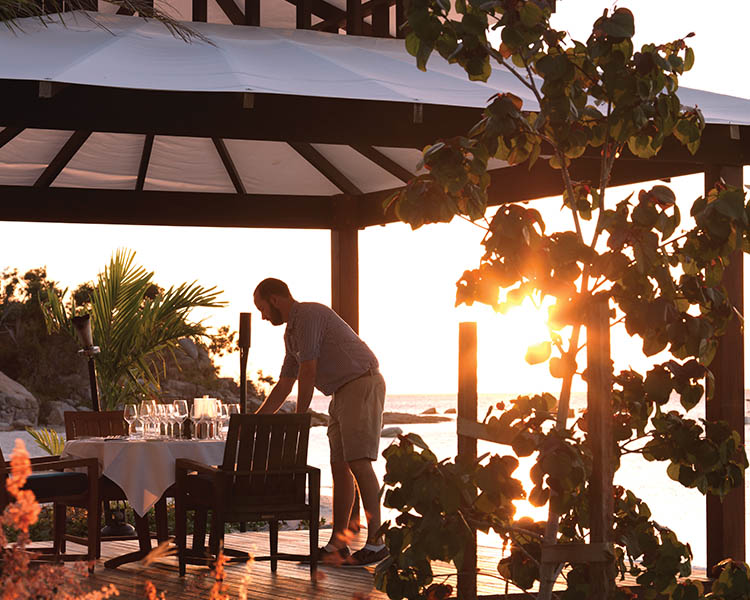 Indulge in a delectable seven-course degustation beneath a private beach pavilion.