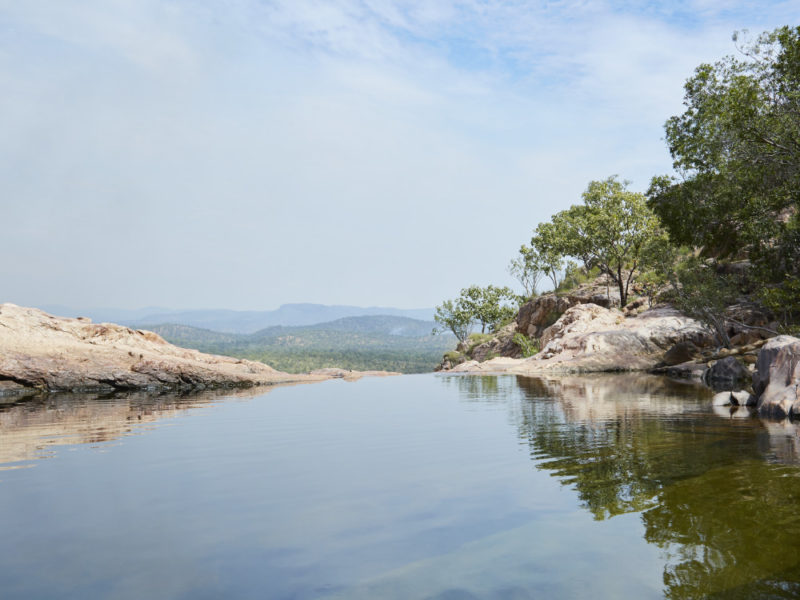 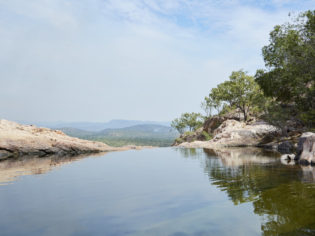 Visit another world without leaving the country by immersing yourself in the Wetlands, Wildlife, ancient rock art and soaring escarpments of Australia’s largest national park.

Why is it that Switzerland is laboriously wheeled out to compare land sizes? It must be tiresome for the Swiss. Perhaps it all started with someone trying to describe the vastness of Kakadu, the largest national park in Australia, a wilderness you could easily get lost in without a guide.

A guide would also come with the necessary 4WD to take you to the many natural swimming pools, waterfalls, and ancient Indigenous art sites detailed across these pages. And they’d tell you which pools are safe to put a foot in, this being home to the largest reptiles on the planet.

It is the natural wonders like these that have made Kakadu a World Heritage site you have to visit at least once and, at 20,000 square kilometres in size, it is half the size of Switzerland. Sorry Switzerland. 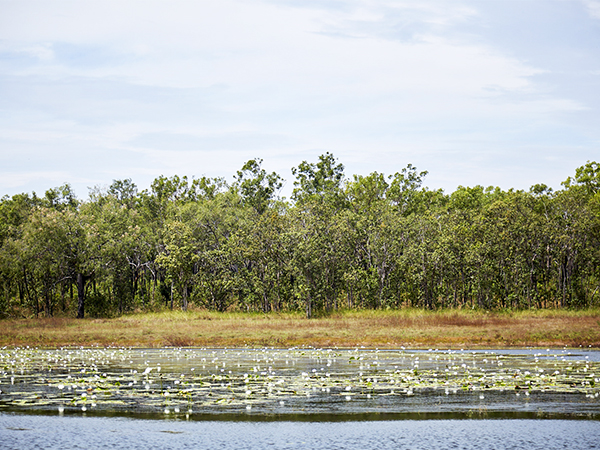 Located within a protected area of the NT, Kakadu National Park can be found 171km southeast of Darwin. The park is located within the Alligator Rivers Region, and there are a myriad of ways to get there.

When should I go?

The countryside changes with the seasons and what you see depends on when you go. During the monsoon or wet season (December through to March or April), the wetlands swell with water and millions of migratory birds, including jabirus and dancing brolgas swoop across the floodplains, in the drier months you can swim in plunge pools above waterfalls and explore the park by vehicle and on hiking trails.

How long should I spend here?

Kakadu is about one third the size of Tasmania. Some ‘do’ Kakadu in a daytrip from Darwin; others spend two weeks here and still don’t see as much as they’d like. We reckon any length of time from three days onwards will help you feel like you’ve ‘done’ the park properly.

The must see sights:

This mass of sandstone was occupied as far back as 20,000 years ago, the rock art like a time machine tracking the societal changes of the Gundjeihmi-speaking people. You’ll find all sorts of animals depicted that still call Kakadu home. 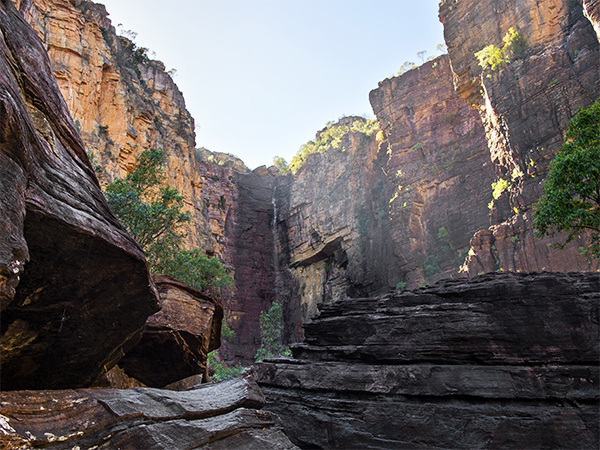 Kakadu comprises vast wetlands fed by creeks and rivers that salt and freshwater crocs call home. Get as close as is safely recommended to the wildlife on an Indigenous-owned-and-run cruise of Yellow Water billabong.

A staggering one-third of Australia’s bird species call Kakadu home and Mamukala wetlands is the epicentre for birds in the park. Set up shop in the observation platform amid paperbarks at the edge of the wetlands, and keep an eye out for the purple swamp hen, magpie geese and kingfishers. It’s like Pokémon for birdlife.

This ancient Indigenous site on the cusp of the Arnhem Land wilderness was a canvas for Indigenous people to express themselves over the millennia. Walk past various rock art sites to a lookout that takes in the Nadab floodplain and the vastness of the national park. The depiction of a Tasmanian tiger here shows you how ubiquitous the animal used to be. 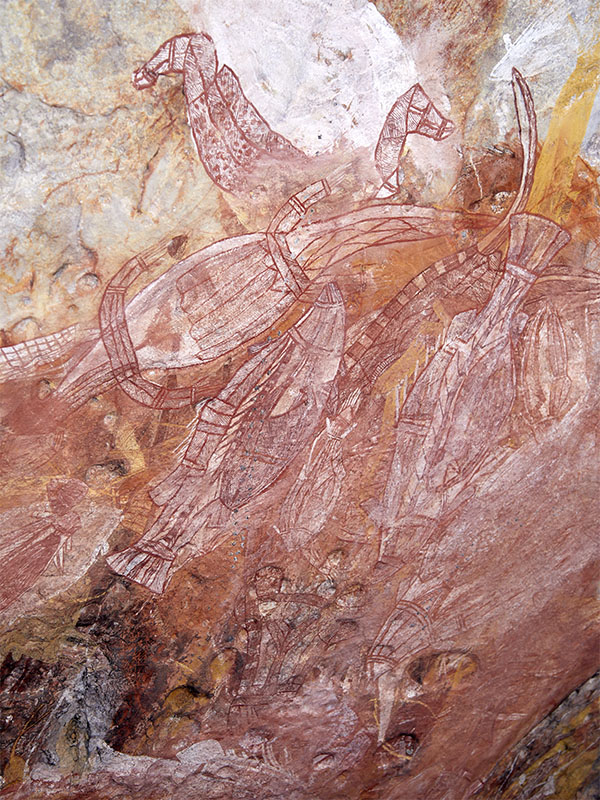 The poster-child of the Northern Territory, there probably isn’t a more perfect natural infinity pool on Earth. Climb the steep escarpment and then cool off in the pool looking out over vast Kakadu. Just elbow any Insta influencers out of the way.

You’ll need to take a 4WD for 14 kilometres off the Kakadu Highway to reach the path leading to this inviting deep green natural bath. Maguk is a natural water theme park, with plunge pools and waterfalls, and no queues.

The Jim Jim plunge pool walk takes you through an ancient anbinik forest (featuring plants dating back 400 million years) to a waterfall plunge pool. Lounge like Mertens’ water monitors have been doing here for aeons. 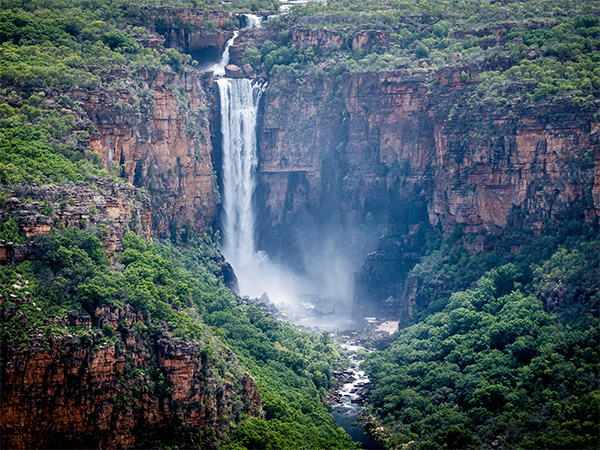 Jim Jim Falls takes you to a waterfall plunge pool

Yes there are crocs galore, but Kakadu is all about birds.

The muse of many a Kakadu wildlife photographer is this spectacularly coloured bee-eater. If you bag a shot, you just have to blow it up and frame it.

Appearances can be deceiving: look carefully and this stork’s seemingly black, scraggly neck is actually a shimmering iridescent blue. It uses its massive black beak to gobble up frogs and snakes in the wetlands. 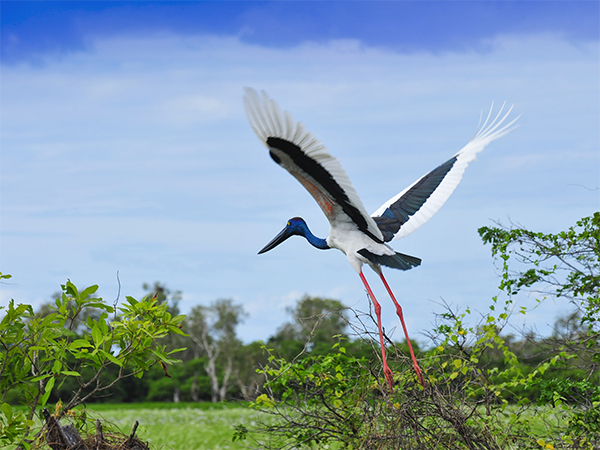 The Black-necked stork (Jabiru) in flight

You can’t visit an Australian national park without first checking what kind of parrots live there. For Kakadu we suggest this striking green and red member that you’ll find in eucalypt woodland.

A wingspan of 2.4 metres makes the brolga one of our largest flying birds. But it’s the elegant mating ritual of elaborate dance that has influenced Indigenous dance and legends for thousands of years. Visit from February to May to witness it for yourself. 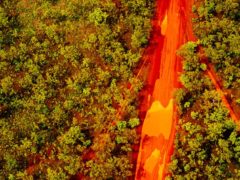 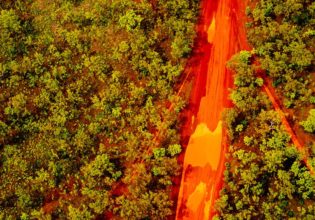 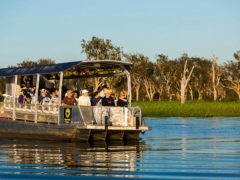 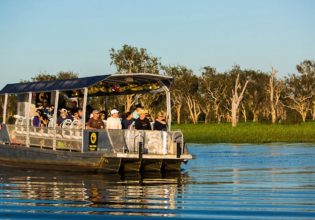 Which Kakadu tours should you choose?

So many options, so little time... choosing which tours to do in Kakadu can be bamboozling because they all sound so great, so we've taken the hard wo... 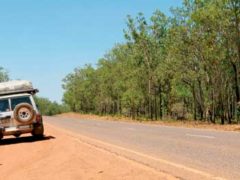 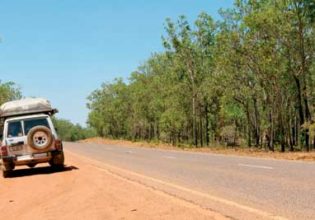 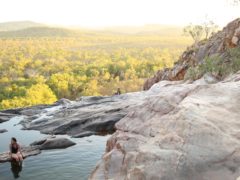 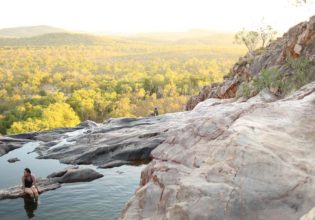 Kakadu National Park is a mini-world that’s better explored on foot than on wheels, and better swum inside than feared from the water’s edge. Here... 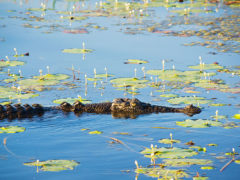 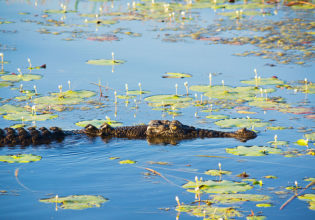