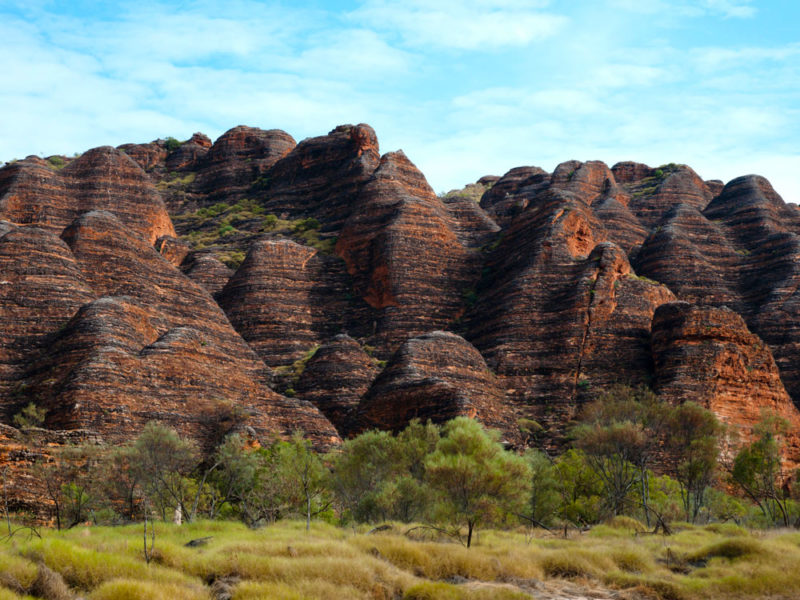 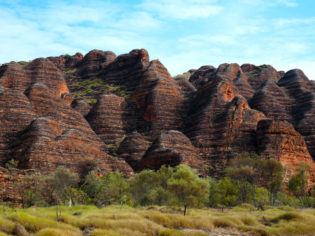 When thinking about Australia’s vast outback, there are a few iconic natural formations that immediately spring to mind. Here, AT presents its top five, with both the scientific and Dreamtime explanations of how they came to be.

Is Uluru the result of the Earth spirits’ crushing tectonic pressures flipping and folding horizontal Arkose sandstone into vertical strata because of grief after a great and ancient battle between Kuniya and Lira? Are the scars on the surface the result of erosion from duelling serpent beings and evil mud dingoes over the eons? Is Uluru the giant, stoic heart of Australia or just a big rock?

The local Anangu have their Tjukurpa, geologists their theories, but in the shadow of her sheer ochre walls there are no answers; there just is. What makes Uluru stand out is its flaunting nakedness, with barely an ounce of vegetation or tumbled erosion on its bright, red, uniform skin. What we do know is this: of all the Outback icons, Uluru is the one you can photograph and never have to explain to anyone, anywhere, where you’ve just been.

Did you know? // In July 1997 it snowed on Uluru, an event so rare that even the Anangu have no previous dreaming to explain what happened. 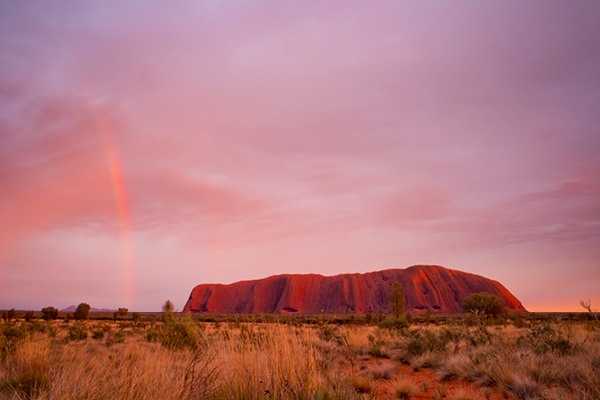 A trip to the Australian Outback wouldn’t be the same without visiting Uluru.

Kata Tjuta seems eternally in the shadow of its more famous neighbour, despite the fact that it isn’t just one rock, but a series of 36 giant domes, some of which are a staggering 200 metres taller than Uluru, just 40km to the east. Wander among Kata Tjuta’s domes and you’ll sense the eerie presence of Wanambi the bearded serpent lingering, in part from the art on the walls and the whistling wind through the corridors.

It’s like a ghost town of calcified skyscrapers, long evacuated from an ancient apocalypse. To the outback connoisseur, Kata Tjuta is the Lennon to Uluru’s McCartney: more revered to the faithful, not as popular to the masses.

Did you know? // Kata Tjuta’s mystery is enhanced by the secrecy of its cultural history, and the fact that to this day it is used in traditional male ceremonies. It’s considered so sacred to local Anangu that most of its creation tales are forbidden to be told, not just to non-Indigenous outsiders, but also to women in their own tribe, uninitiated males, and in some cases of the more sacred songlines, anyone but the most senior of men. 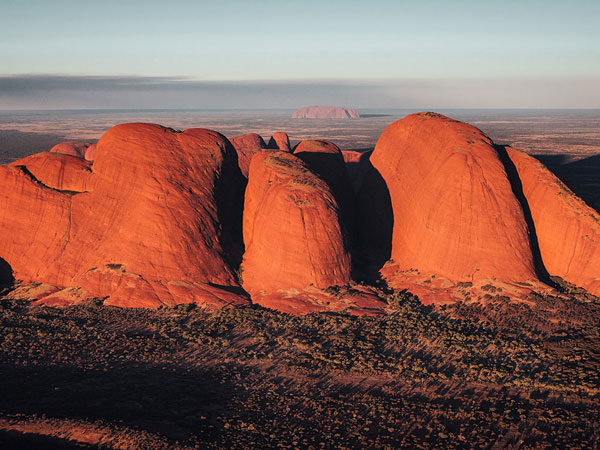 Kata Tjuta/The Olgas are a staggering 200 metres taller than Uluru – yet are often overlooked.

Purnululu has everything you could want from an outback icon: freaky geological craziness, an unnerving beauty and extreme remoteness. The tiger-striped beehive domes hide a labyrinth of gorges filled with rock art, waterholes, wildlife and Dreaming tales. But to see all this requires effort: Purnululu sits some 250km south of Kununurra, followed by a 55-kilometre-unsealed track, to be met by, well, almost nothing.

There are no hotels, souvenir shops or even electricity, just amazing sunsets to remember and stories of exploration yet to be lived. Because of the intense disagreement between two local Aboriginal groups (Djaru and Kidja), with two opposing creation stories for the Bungle Bungle, we’re unable to delve too deeply into that side of things – except to say that, in general, our old friend the Rainbow Serpent is responsible for much of what has happened in relation to the land.

Especially where limestone ridges are involved, a great band of which runs alongside the edge of the national park. Geologically speaking, though, the famous black and orange stripes are caused by alternating layers of sandstone with and without high iron content (iron equals rust, which produces the orange/red colour), and the mounded shapes were caused by 20 million years of uplift and erosion of the fragile sandstone.

Did you know? // The wider outside world were unaware of the existence of the Bungle Bungle until the 1980s, when a film crew stumbled across them by mistake. 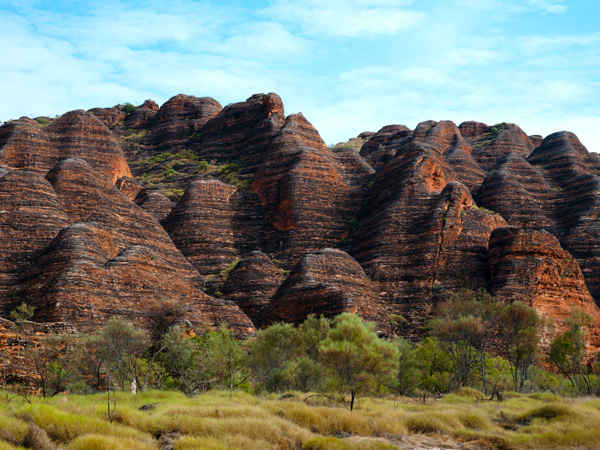 In the middle of a rusted landscape, the emerald green of Kings Canyon slicing into the countryside is a welcome relief to weary eyes, and a sight so stunning that no one official Indigenous creation story has been mutually agreed upon by the traditional owners of the area.

“Watarrka is of deep spiritual significance to the Luritja people: it contains numerous sacred sites and many dreaming stories are connected to this area. Some are more significant than others. Some are local traditions, while others traverse hundreds of kilometres linking people religiously and socially together. It was also a meeting place for people in the past and a source of food and water, and remains so today”.

A stroll around the canyon rim will garner many rewarding sights. The Lost City, a series of sandstone domes, hint at a sub-aquatic past. A lush oasis at the bottom of the gorge, the Garden of Eden, cradles an abundance of still water and unique plant and animal life. But the highlight has to be the 230m canyon wall drop.

Did you know? // Some of the cycads (palm trees) in Watarrka aren’t found anywhere else outside the canyon and are thought to be a floral remnant of Central Australia’s tropical past. 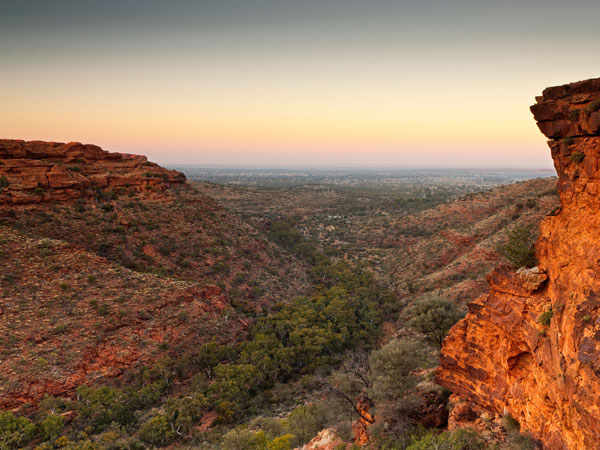 The vertical cliffs of Kings Canyon in Watarrka National Park.

There are rare places in the world where photos cannot do justice to the majesty of the scenery. Rarer still are those idiot-proof places where any schlep with a camera can take a great shot. The Devils Marbles, between Alice Springs and Tenant Creek, is one such place.

Fail to capture the uniqueness of the landscape and the impossible magic of what you see here, and you should have your camera licence revoked and never be allowed to travel outside your own suburb again. The Devils Marbles are a collection of dozens upon dozens of near perfectly round phenomenons of geology (formed by a combination of spheroidal weathering and solarisation) that balance themselves, sometimes on each other, around the Karlu Karlu NP.

They come in all manner of sizes and positions, up to 6m in diameter, in pairs, split in two or teasingly perched on a ledges waiting to topple over. The area is also a boundary for Warumungu and Kaytetye language groups, with two others (Warlpiri and Alyawarra) also having traditional associations with the region. Their creation story has Arranji, the Devil man, passing through the area and making a ritual hair belt, twirling it into strings and dropping hair clusters on the ground, forming the boulders we see today. 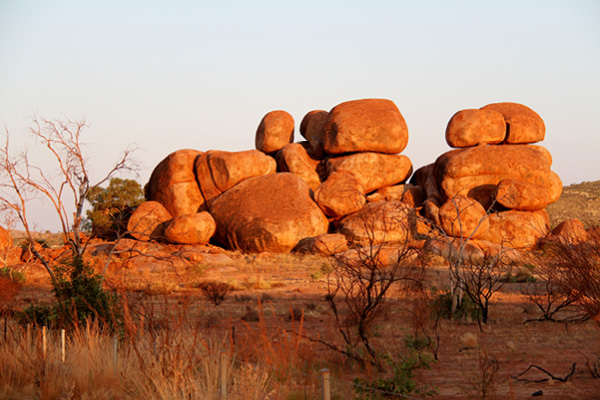 The Devils Marbles are huge granite boulders scattered across a wide, shallow valley in the Northern Territory.

On his way back through, he spat on the ground to form the granite boulders in the centre of the reserve, before returning to his home, a twin-peaked hill to the east.

Did you know? // Why “Devils” Marbles and not “Devil’s” Marbles? Australian naming convention stipulates the omission of the apostrophe in place names. So, you go to the Devils Marbles to see the Devil’s Marbles.