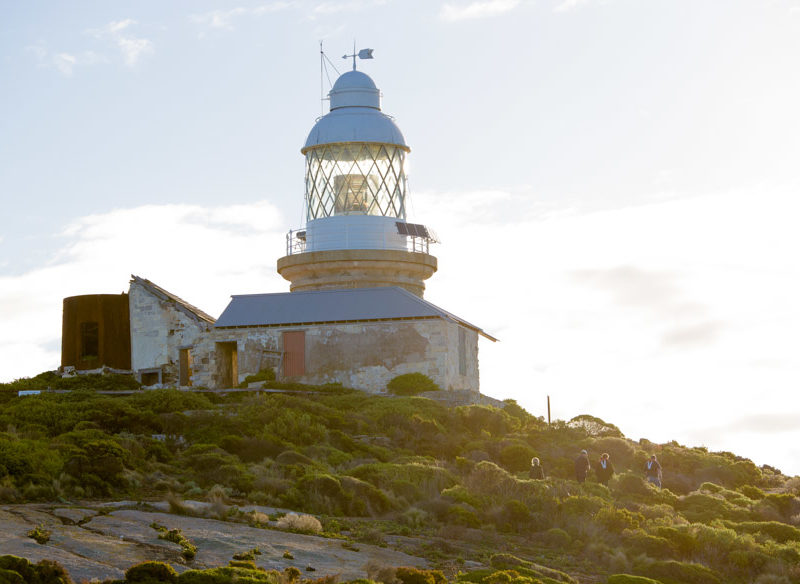 Albany saw the emotional departure of thousands of personnel heading off to the Great War; their stories are kept alive at the town’s National Anzac Centre, a powerful reminder of their sacrifice.

Let me tell you a story. It’s a tale about a teenage girl who lived on a remote island only three kilometres long and 600 metres wide.

Her father kept the lighthouse that stood on rounded granite rocks, assisting ships as they sailed into the natural harbour of Albany in Western Australia. The family led a rugged and isolated existence.

When the girl was 15, dozens of warships crowded into King George Sound, surrounding her island.

Some 41,000 Australian and New Zealander soldiers – to become known as the ANZACs – found temporary home on those waters as they gathered on the south-western tip of Australia.

Readying to fight in World War I, few were allowed off the boats as they waited to depart in a massive, submarine-chaperoned convoy.

Although none of them met the lighthouse keeper’s daughter face to face, they could easily see her. Many formed such a bond, they sent her postcards from the front, addressed to ‘the little girl on Breaksea Island’.

Her name was Fay Catherine Howe. She was born at home at the base of Cape Leeuwin lighthouse, Margaret River, in 1899 and moved to Breaksea Island in 1906.

There, she spent her days roaming scrubby heath, shooting rabbits for food and talking to two donkeys that would transport goods when the supply barge arrived once every three months.

When the troops were stationed in the Sound, she took on a new role: that of communicator. Using semaphore flags and, historians believe, Morse code, she would signal to the ships and receive their messages, delivering final words to Albany via undersea telegraph. From there, the messages would reach loved ones across Australia.

“Those soldiers would’ve been desperate to send their final messages home, and they were asking her to do that,” says Dianne Wolfer, Albany-based author of Lighthouse Girl, who looked carefully into Fay’s history.

“It was their last chance to tell their loved ones things.”

One hundred and two years later, a helicopter filled with curious visitors carefully lands on Breaksea Island just as a thick sea fog clears. Light catches the bay’s spirit level flat water and it sparkles like a diva’s sequin dress.

Until now, travellers have never had immediate access to the historic island. Only reachable by chopper, Rainor Marshall of SkyHook Helicopters recently began aerial tours that see visitors touching down on this weathered outpost, where the lighthouse Fay would’ve played in still stands.

“There’s something romantic about lighthouses, living out in the wild where it’s rugged and remote,” says Rainor.

“Growing up in Albany, we all knew the island was off in the distance. I’d watch the choppers go out (to deliver goods to modern-day keepers) and think that was pretty cool.”

Today, Breaksea’s lone tower operates via solar power and irregular visits from mobile technicians, but none of the island’s wonder is lost.

Our party of six walks along a rocky path lined with the heath Fay’s donkeys nibbled down in their day, past the old, circa 1858 lighthouse ruins, and the ‘new’ one that was constructed in 1902 from granite quarried on the island.

The short flagpole believed to be used by Fay to signal to the troops remains alongside. Further down the hill are two cottages – one where Fay used to live. More than a century old, restoration works have begun to make them suitable for future holiday escapes.

Gazing out to the narrow gap between the island and the wildflower-dotted mainland, it’s easy to imagine the ships moored only a couple of hundred metres away.

And heartbreaking to think that for one in every three of the men and women who left for Egypt, Gallipoli, France and beyond, this was their very last glimpse of home.

The ocean flicks a chameleon-like switch and changes to steel blue. We peel away from the bruised cloud canopy and zoom over Albany’s pale, sandy beaches lined with Norfolk pines and picnic tables, gaining an aerial view of Albany Heritage Park.

Straddling Mount Clarence and Mount Adelaide, the park contains the new National ANZAC Centre, where memories of the Great War are stored and shared.

Upon entering, every visitor is given one of 32 cards. On each one is a photograph of a soldier, photographer or nurse (two are from enemy camps: a Turk and a German) whose life they follow as they move through the centre.

I’m handed a bloke named Archie Barwick. He was a private in the first battalion of the AIF, originally from Tasmania. At 24 years old, he’d been managing a New South Wales sheep station when he decided to enlist.

Lured, like so many, by the promise of a great adventure, he worried his stature would rule him out – he stood only five feet, four inches (about 1.6 metres). When he was accepted on 24 August 1914, he did somersaults in celebration. Two months later, he found himself in Albany.

Beamed onto a touch-screen, I can sift through his papers, revealing beautiful cursive handwriting that details his chest measurements, his eye and hair colour and a medical examination that includes a test for ‘marked varicocele with unusually pendant testicle’.

Leaving Archie for a moment, I wander slowly past glass cabinets showing heavy khaki uniforms, guns and bayonets and mementos procured from the enemy.

I gaze at sepia photographs and listen to audio accounts from the front, including one by war correspondent Phillip Schuler, recently portrayed by actor Sam Worthington in the telemovie Deadline Gallipoli.

Further along, in a dedicated room, more than 41,000 names roll like film credits on a long, black, LED screen laid flat. The room’s windows grant stunning views of the Sound where those same individuals clustered in wait for their dawn departure.

One of the centre volunteers, Ray Valverde, tells me it takes 50 hours to cycle through the names.

“It’s the human side of the story, that’s what’s remarkable about this place.”

I reach another card reading point and discover that Archie went to Gallipoli, via Egypt. His battalion lost about 400 men in four days, attacking the Turks and taking the Ottoman trenches at Lone Pine.

By July in 1916, Sergeant Archie was fighting in Pozières, France, and was involved in the battle at Gueudecourt. He was the only one to reach enemy trenches during the failed mission, and was bayonetted in the leg.

Despite the poignancy of the stories I’m hearing, history fatigue sets in, and Ray suggests I take a breather outside at the cafe. The centre can take two to three hours to trawl through thoroughly, and for the most part, it’s heavy stuff.

Outside in the sunshine stretch the grounds of Princess Royal Fortress. Established in 1893, it’s the oldest surviving military site in WA and its convoy walk – where each of the warships departing Albany is described – leads to a fantastic lookout with wrap-around views of Princess Royal Harbour, King George Sound and, further out, Breaksea Island.

“The story of the ANZACs is something that’s really sentimental to people in town,” he says.

“Because we’ve had the National Anzac Centre built, and all the attention nationally, it cements it in our community.”

Returning inside, I prepare myself for the end to Archie’s story. But I’m lucky – as was he. Archie returned home in 1919, after five years of overseas service. He married and settled on a property east of Armidale, raising three children.

He became a Justice of the Peace, ran the local polling booth at election time and during World War II, commanded the local volunteer defence corps. He died in his sleep, aged 76. Content, I hope, with his contribution to Australia.

Albany is a one-hour flight or a 4.5-hour drive from Perth. REX is the only airline servicing the city.