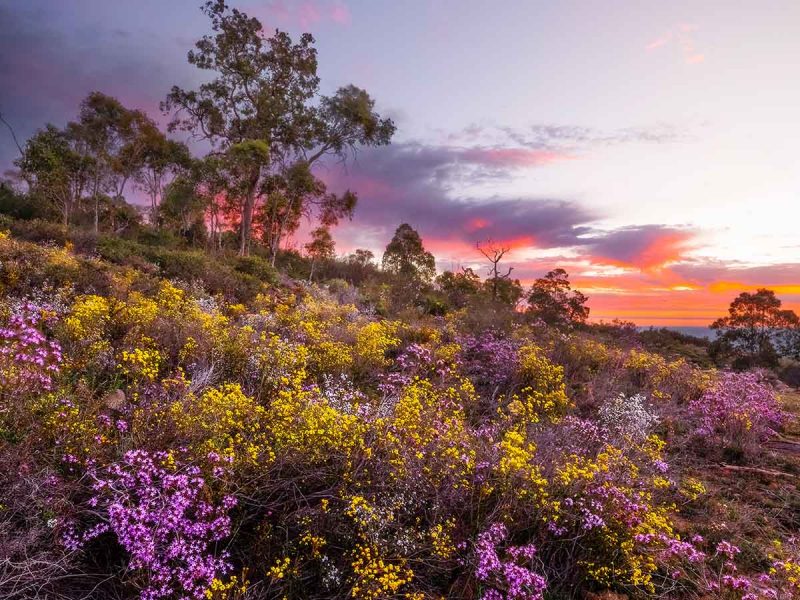 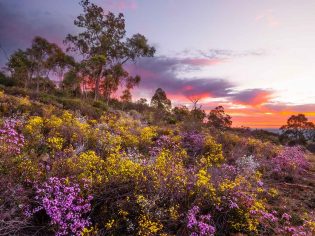 WA’s prolific wildflower shows offer up nature at its most vivid and ephemeral. Here is our guide to where to see the best blooms and most brilliant pops of colour in the state.

The contrasts in nature are renowned, but it seems that Australia got in line twice when they were handing out divergent beauty – coast, deserts, mountains, rainforests. That being the case, it feels like Western Australia might have snuck in one extra time in order to be blessed with the exquisite phenomenon of its parched, red landscape bursting into a kaleidoscope of vivid colour with the arrival of wildflower season each year. It is not an abstract statement; while every state in Australia is blessed with floral flourishes from an array of native flora, WA puts on one of the largest shows of wildflowers on Earth, with more than 12,000 species contributing to the wistfully ephemeral annual spectacle. Of these, an impressive 60 per cent are completely unique to the state and cannot be seen anywhere else on the planet. 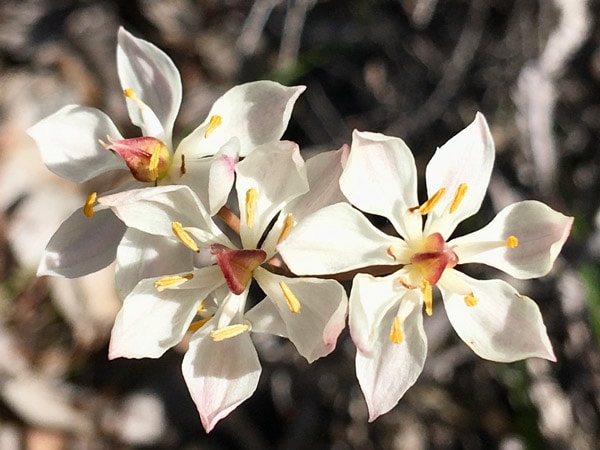 Where and when to see the wildflowers in WA

Wildflower season begins in the month of June with the first flush of colour in the north, and then steadily creeps south throughout late winter and spring, finally fading into summer on the south coast during November.

With its status as the wildflower capital of the country, it’s little wonder that WA has its very own wildflower region in which to see the landscape burst to life. Wildflower Country, which starts a few hours’ drive north of Perth, is a collective of nine local government areas, including a number of towns in Greater Geraldton, where winter and spring colour are big drawcards.

Places like Morowa and Perenjori, where a pink haze hovers over the landscape and you can search out the prepossessing wreath flower, which is endemic to the state. Or Coorow Farm, one kilometre from the farming town of Coorow, where a dedicated wildflower trail through the landscape (that can be walked or driven) exposes visitors to everlastings, wattle, eucalypt, orchids and blue lechenaultia. 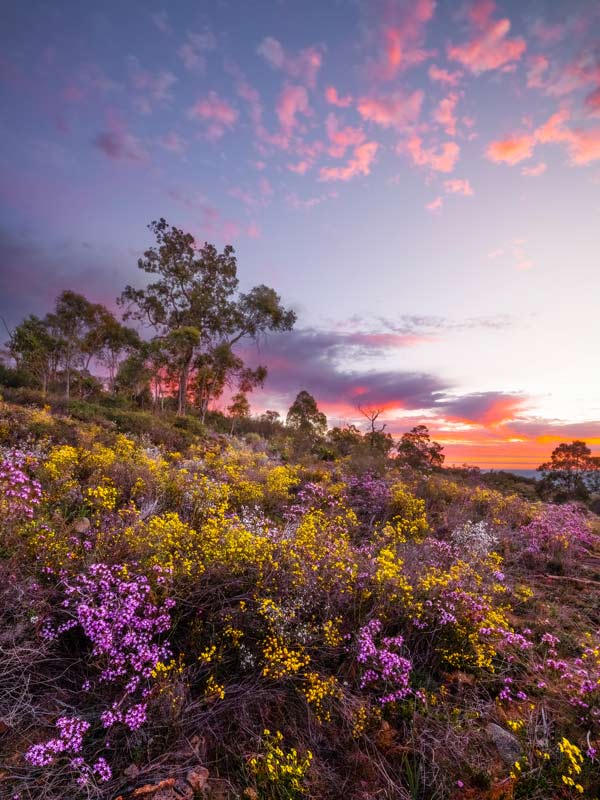 The Golden Outback is another region where nature has endowed its bounty so generously. The area’s easily traversed wildflower trails through the Goldfields, Granite country, Wave Rock and Esperance encompass some of the most stunning shows in the state, as well as some of its top sights. The region has a number of suggested self-drive wildflower itineraries running from two to five days in duration. Alternatively, you can book a tour with the likes of Wildflower and Safari Tours Western Australia, which specialise in wildflowers and flora tours, from one-day jaunts to the Margaret River Region to nine-day explorations to Exmouth. 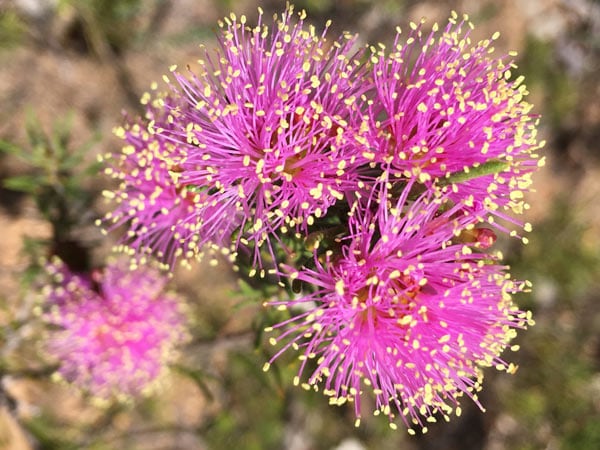 Melaleuca (Melaleuca parviceps) are pretty in pink in the Shire of Toodyay. (Image: Tourism Western Australia)

One of Australia’s most colourful road trips on offer is the 309-kilometre Wildflower Way, which weaves through the landscape from Dalwallinu to Geraldton, taking in locations such as Perenjori, Morawa and Mullewa. Along the way is a series of 21 interpretative signposted sites designed to educate and inform flora fanatics, with an enthralling range of themes and issues.

Lesueur National Park, a three-hour drive from Perth on the Coral Coast, is renowned among wildflower enthusiasts and botanists, with more than species of flora having been identified there. Several of these cannot be found anywhere else on the planet (and are sadly included on the endangered list), resulting in the park being recognised as one of the most significant reserves for flora conservation in the state. 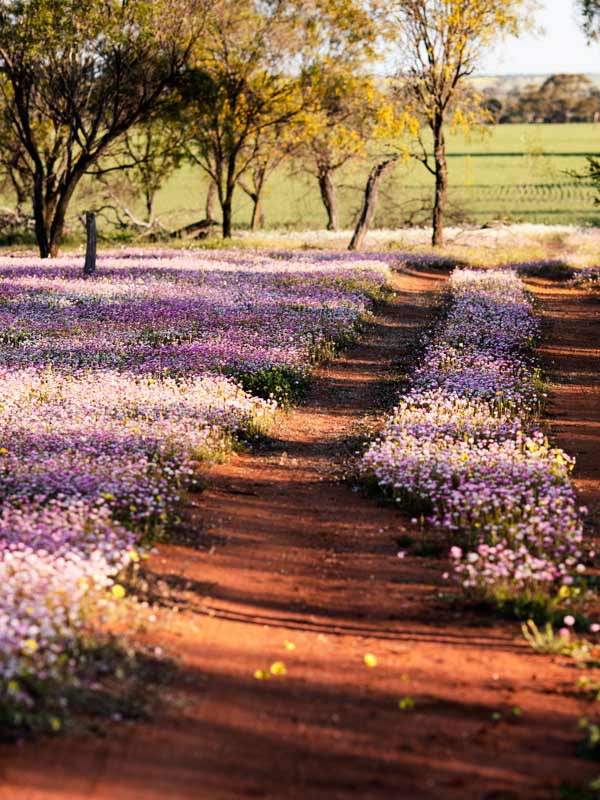 You can view flowers by driving the loop road that circles the park, or take one of the signposted bushwalks with camera at the ready. And be sure to look up while at Lesueur too; the park provides a habitat for more than species of birds that rely on the colourful and diverse flora for their survival, including the rare Carnaby’s black cockatoo. Other locations on the Coral Coast to visit include Cape Range National Park and the Shark Bay World Heritage Area, where you can see wildflowers scattered like confetti across grassy coastal dunes and dotting the rich ochre dirt throughout the year.

And, in another perfect example of contrast, the delightfully lo-fi pursuit of wildflower spotting now has its very own app – the WA Wildflower Tracker – which details the latest information on wildflower blooms and shows, with maps, flower profiles, suggested tours and itineraries, and submissions from fellow spotters. 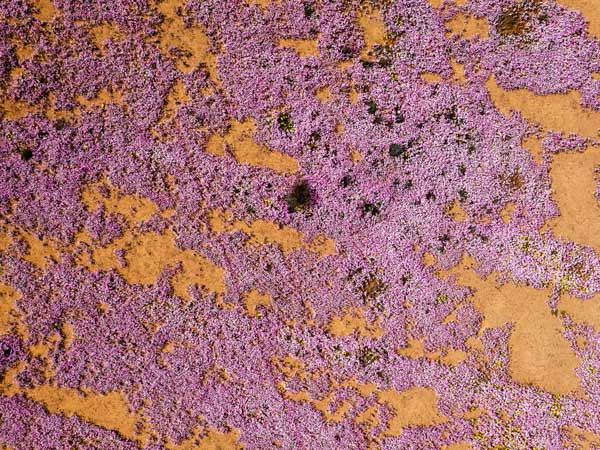 The delightful pursuit of wildflower spotting now has its very own app – the WA Wildflower Tracker.

There are certain etiquettes (and laws) to follow while viewing wildflowers to ensure that the experience is equally sublime for all comers.