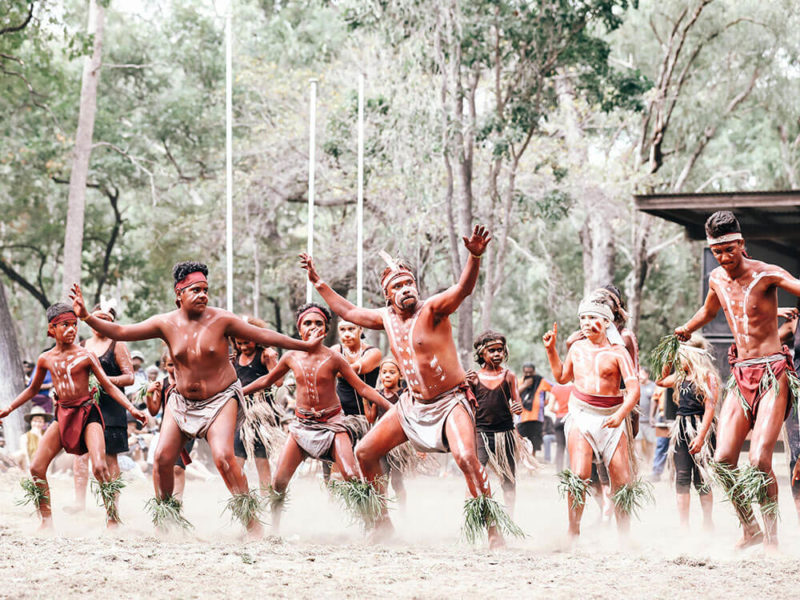 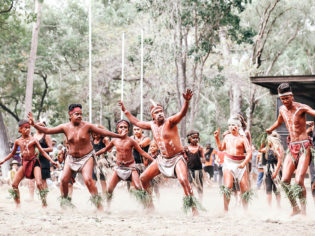 Our country is home to the world’s oldest living civilisation, one that is rich in traditions and beliefs. These remarkable events aim to share and preserve Aboriginal culture, giving visitors the chance to not only learn more about it but fully immerse themselves in it.

Here are the best Indigenous festivals and events to attend in 2023. As dates change from time to time we have listed the typical time of year the event is held.

This Indigenous-inspired food festival, Taste of Kakadu,  runs for 10 days and features a host of delicious events such as degustation dinners, elder-led cooking demonstrations, camp cook-ups and guided bush walks to forage for native food. There’s also a festival hub complete with live music and food stalls where you can sample local delicacies such as buffalo and crocodile. An elder-led cooking demonstration at A Taste of Kakadu.

Eighty kilometres south of Katherine, the small Aboriginal community of Barunga plays host to a 4000-strong crowd for the Barunga Festival, a celebration of Indigenous music, sport, cultural activities and traditional arts. Visitors can learn to cook damper, make didgeridoos and spears, and learn about bush medicine. There’s also an art shed exhibiting work by local artists, and traditional music and dance performances throughout the weekend. Hosted by the Yothu Yindi Foundation, Garma Festival is a four-day gathering of around 2500 political and business leaders from across the globe that aims to address and improve social equity for Indigenous people. Held at a remote ceremonial meeting ground in north-east Arnhem Land, guests can learn about Aboriginal Australia and the rich Arnhem Land Yolngu culture through talks, dance, arts and song, and camp under the stars at the end of each day.

More than 2000 Aboriginal artists will come together for the 13th annual Darwin Aboriginal Art Fair, which showcases the works of emerging and established artists across a range of mediums from dot painting to bark painting and sculpture. The 2020 event will also include Indigenous short-film screenings at Darwin’s Deckchair Cinema and fashion shows, featuring designers who have collaborated with local Indigenous artists.

Parrtjima – A festival in light

Parrtjima’s 10 days of festivities showcase the oldest culture on Earth through cutting-edge technology. The program features an array of breathtaking light installations including the lighting up of the spectacular MacDonnell Ranges, as well as live music, film screenings and a number of workshops to learn local languages, dot painting and traditional crafts. The MacDonnell Ranges light up at Parrtjima’s 10 days of festivities.

Art centres from across Northern Territory, South Australia and Western Australia, all members of the Desart peak body, come together for Desert Mob, an annual art gathering in Alice Springs. There’s also a symposium where visitors have the opportunity to meet artists, listen to their stories and purchase quality works ethically at the event marketplace.

Since the 1980s the Aboriginal people of Cape York have celebrated their culture though song and dance at the Laura Dance Festival. Held every two years, the much-anticipated festival draws in thousands of visitors to watch local dance groups from 20 communities vying for the winner’s shield. Winds of Zendadth is a bi-annual event which sees the communities of the four Torres Strait Islands descend on Thursday Island for a celebration of their diverse cultures. Over four days this small isle is buzzing with activities, from boat races to storytelling and a showcase of local island cuisine.

What sets the  Karijini Experience event apart is its location in the remote and simply breathtaking Karijini National Park. The four-day program features around 50 events such as meditation and yoga on the ancient rugged landscape, guided cultural walks, film screenings under the stars, bush tucker high tea and more.

Wardarnji is an atmospheric night-time event that celebrates the rich culture of the local Noongar people through dance, music and storytelling on the south lawn of Fremantle Arts Centre. Visitors can bring picnic rugs and watch more than 100 dancers by the light of fire torches.

The Tarnarthi Art Fair is the opening weekend of a three-month-long celebration of Indigenous art in public spaces across South Australia. Held at the Tandanya National Aboriginal Cultural Institute, visitors can meet artists and buy artwork, as well as join art talks and workshops.

Yabun is a one-day gathering of Aboriginal and Torres Strait Islander people on Australia Day. It features live music, a market of food and Indigenous-themed merchandise, a Corroboree Ground of cultural performances, panel discussions in the ‘Speak out tent’ and a heap of activities for the kids including traditional arts and craft.

Part of Byron Bay’s long-running Bluesfest, Boomerang Festival is a showcase of local and regional Indigenous music, with artists coming from all over the country, Torres Strait Islands and even Papua New Guinea. Festival-goers can partake in musical workshops, watch dance rituals and join thought-provoking cultural exchanges.

Held at the O’Donnell Gardens – a significant meeting place for traditional owners – Yaluk-ut Weelam Ngargee is one of Melbourne’s largest cultural festivals. The busy one-day schedule features different spaces to watch cultural performances and cooking demonstrations of native foods, and to partake in craft workshops such as basket weaving and face painting. You can also browse the food and market stalls.

For more event inspiration, check out these unique festivals and events happening in the Northern Territory. 24 incredible things to do at Uluru (that aren’t climbing)

We take a look at the incredible variety of things to do in Uluru at Uluru-Kata Tjuta National Park above and beyond scaling the Rock. Anangu traditi... With its unparalleled beauty and endless reaches, the Aussie outback holds its own. And, while the bush certainly brings its own charm – it also bri...