Parrtjima: A night in the desert that will blow your mind 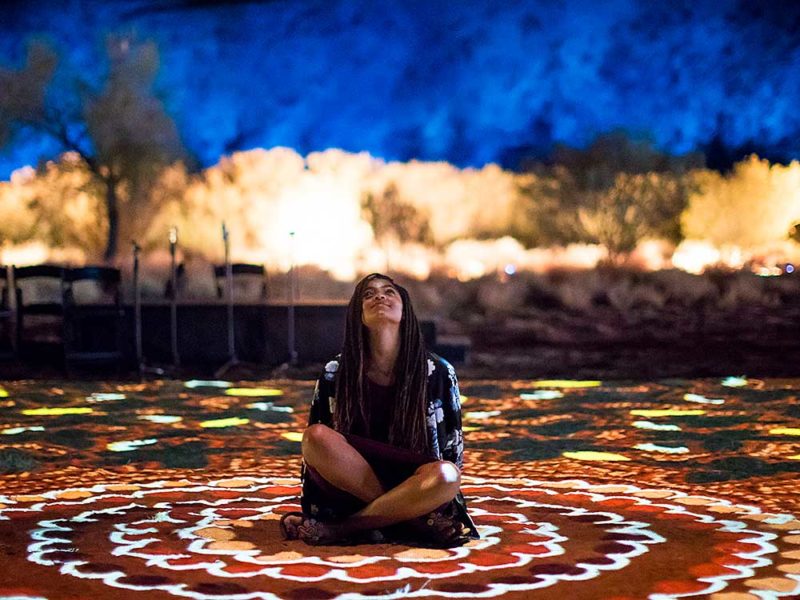 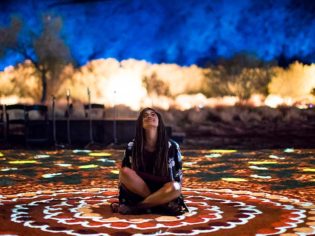 Parrtjima - A Festival in Light is an authentic modern and ancient festival of light, culture and art in Alice Springs. Image Courtesy Tourism NT / James Horan

Parrtjima - A Festival in Light is an authentic modern and ancient festival of light, culture and art in Alice Springs. Image Courtesy Tourism NT / James Horan

A dazzling light and art event in a desert landscape unlike anywhere else in the world, Parrtjima is perhaps Australia’s brightest celebration. This fantastical celebration of the world’s oldest living culture begins in Alice Springs…

When artist Bruce Munro lit up the area around Uluru with his Field of Light installation, it reminded most of Australia that the nation’s outback desert can look pretty spectacular at night. Some people, however, have known it for many thousands of years.

Lights from Parrtjima beam into the sky as the West MacDonnell ranges provide the stage. Image Courtesy Tourism NT

Parrtjima: A Festival in Light uses the latest lighting technology to showcase Aboriginal culture, including the lighting of a 300-million-year-old natural canvas that’s unlike any place else on Earth.

Creatively directed and produced by AGB Events on behalf of the Northern Territory Government, Parrtjima prides itself on its authenticity as a showcase for one of the world’s oldest continuous cultures; it literally shines a spotlight on Aboriginal artists, and casts their work against a landscape of remarkable spiritual significance.

The artworks are interactive – for a moment you can be part of the canvas at Parrtjima.
Image Courtesy Tourism NT / James Horan

This year’s festival lights up Alice Springs in September, while those planning their 2021 outback adventure can catch the lights again in April. Those who’ve seen it in previous years will never forget it, but for those that have not, here’s everything you need to know about Parrtjima: A Festival in Light.

Parrtjima is a free 10-night festival of light held annually in Alice Springs. The event is an annual celebration of the work of Aboriginal artists, the evolution of their styles and methods, and their ability to experiment while staying true to Country and culture.

Many of the installations rise to life as the sun sets on the West MacDonnell Ranges. Image Courtesy Tourism NT

As Parrtjima’s lights dance across the Alice Springs Desert Park, they communicate through story, art and landscape. The diverse program of light installations featuring artworks of Aboriginal artists embraces audiences in a rich, sensory experience.

The featured artists are predominately from across the red heart of Australia, and include representatives of the Arrernte, Luritja, Anmatyerre, Warlpiri and Pitjantjatjara nations. Artworks are curated from submissions from more than 40 Aboriginal art centres and independent artists, and assessed for cultural appropriateness by the Parrtjima Festival Reference Group, a network of respected Arrernte people.

The AGB Events creative team, including First Nations advisor Rhoda Roberts AO, then incorporates the approved artworks into the festival’s creative program; the paintings are turned into large-scale illuminated installations that light up the desert.

What’s the significance of Parrtjima?

Parrtjima’s organisers regard the festival as a meeting place between old and new. This year’s theme is Lifting our Spirits, with a goal of lifting the spirits from the work of artists old and new to meet the spirits of audiences as they discover Parrtjima’s portfolio across Mparntwe (Alice Springs).

The festival’s organisers see Parrtjima as an innovative method of storytelling; this year’s festival is themed around the cycles that connect the Arrernte people to kwatye (water), the cosmos, and the ebb and flow of sky and Country.

What to expect at Parrtjima

The MacDonnell Ranges are usually majestic enough, but imagine them brought to life with spectacular lighting effects.

Each year, the festival showcases live music by Aboriginal artists, free films, performance art, and stories told and shared in and around Todd Mall, the Alice Springs CBD, and Desert Park, situated at the base of the West MacDonnell Ranges.

Cultural workshops have also been hosted across the festival, allowing visitors to learn how to make a spear, discover the secrets of the ancient Arrernte language, or create their own artworks and sculptures. Details of the revised September program will be announced in the coming months.

Visitors interact with one of the art installations at Parrtjima 2019. Image Courtesy Tourism NT / James Horan

The Lighting of the MacDonnell Ranges is one of the highlights of the signature installations: two kilometres of the MacDonnells are given an illuminated makeover with a light show that reflects the colours and movement of the desert landscape.

Pro tip: the show, which is accompanied by a dynamic soundscape and narration, is best viewed once the sun has set.

The crowd favourite, Grounded, makes its return, projecting across Country a giant, seamless canvas of animated artworks by Central and Western Desert region artists brought to life using the latest technology. Enveloped by an atmospheric soundscape, audiences become a piece of the art as ethereal sand trickles through their hands.

The Desert Park light installations are literally a cut above. Artist and former AFL player Greg McAdam’s artwork Grass Seed, is a seven metre-wide globe of incandescence, suspended three metres above the ground. It serves as the park’s central axis, sprouting off in different directions to other towering installations.

Arrernte artist Rachel Wallace artwork has been reimagined, turning her Dreamtime-inspired Alatye (Bush Yam) into a four metre-high flower, while 23-year-old Lachlan Dodds-Watson’s eight-metre-high piece based on his artwork, Emu Laying Eggs at Night, is a take on the new generation of artists, and is the tallest emu you’re likely to see this year or next.

How to travel to Alice Springs to see Parrtjima

Note: this year’s festival has been rescheduled to September 11 to 20 from its traditional April date.

If you’re planning even further ahead, Parrtjima will return to April in 2021. The festival’s producers are already preparing for next year.

Whenever you plan to attend, you’ll begin your adventure in the “outback capital” of Alice Springs (check out our Alice guide page). Nestled between the East and West MacDonnell Ranges, Alice is famous for its beautiful desert landscapes, colourful outback characters, opportunities for adventure and a strong Aboriginal culture.

More amazing events and festivals in the Northern Territory

You want more? Check these out:

The best Indigenous events across Australia

Uluru Short Stay at Sails in the Desert

Uluru Short Stay at Sails in the Desert. 3 nights accommodation from $469pp* including:

Save up to 30%* at Oaks Port Douglas Resort

Explore the gateway to the Great Barrier Reef in tropical North Queensland. Book now, pay later and save up to 30%* this spring.

Uluru Short Stay at Sails in the Desert

Uluru Short Stay at Sails in the Desert. 3 nights accommodation from $469pp* including:

Save up to 30%* at Oaks Port Douglas Resort

Explore the gateway to the Great Barrier Reef in tropical North Queensland. Book now, pay later and save up to 30%* this spring.