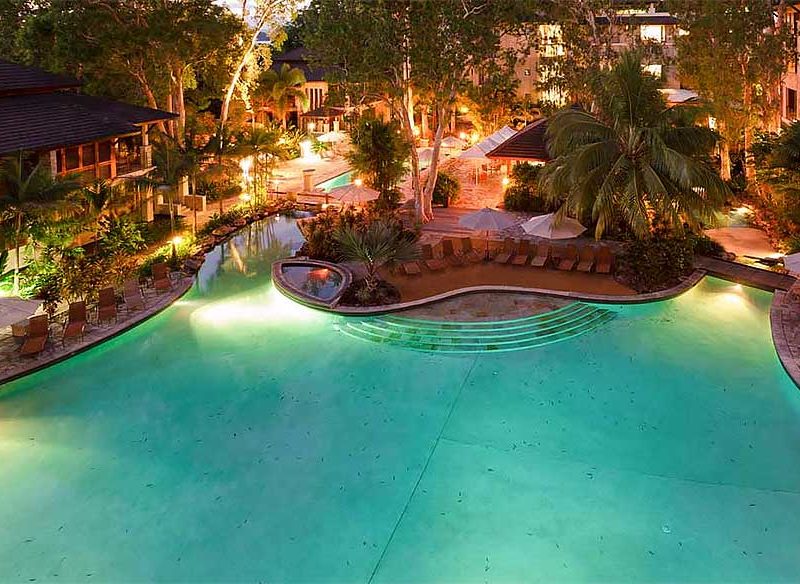 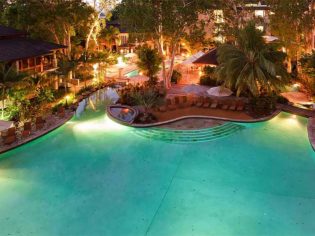 Cairns has well over 100 hotels and motels ranging from budget to five stars.

But in the summer months you can’t swim at Cairns. At that time of the year the city, located between two major rivers and surrounded by mangroves, is characterised by mudflats, stingers, box jellyfish and the occasional crocodile. Consequently, although Cairns has become the tourist centre of the region and the premier access point for the Great Barrier Reef, the actual development of high-end tourist accommodation has occurred to the north of the city with places like the titillatingly-titled Yorkeys Knob, Trinity Beach, Palm Cove and, most famously, Port Douglas in the 1980s all vying for attention.

The logic is simple. All the major vessels which take holidaymakers to the Outer Reef on a daily basis start in Cairns, move up the coast to Port Douglas and then sail out to the reef. Therefore anyone staying at, say, Palm Cove is not at a disadvantage in terms of access to the region’s primary tourist attraction. Equally, the three major mainland attractions – SkyRail, Kuranda and the Tjapukai Cultural Theme Park – are all located to the north of the Cairns city centre. All these places have beaches and all those beaches can be effectively netted in summer so that tourists can actually swim between the beach and the net in safety.

With this in mind, Sea Temple Resort and Spa, a large resort-hotel complex comprising 126 apartments, is a new kind of holiday experience. It’s the first in a series of five-star resort-hotels being built by the Juniper Property Group. The others will be constructed at Yorkeys Knob (which, for some reason, they prefer to call Cairns), Port Douglas and Magnetic Island, off the coast from Townsville. The aim is to build, design and furnish new hotels to the highest contemporary standards and then to sell all the apartments. The “hotel” will be run by offering each apartment owner a range of options. At one end of the scale they can simply return the apartment to the hotel for full-time use. At the other end the apartment can be removed from the hotel as such and used as private accommodation.

The project is obviously successful. I stayed in one of the three-bedroom bures at the front of the complex. It was recently sold for $2 million and will be available as accommodation for the public for most of the year.

Sea Temple is currently managed by the amiable and fastidious Steve Anstey, who has previously managed both Lizard Island and Bedarra. Steve has spent most of his life looking after people in prestigious destinations and his attention to detail is remarkable.

Sea Temple is located 26km north of Cairns airport and lies near the beach just south of the township of Palm Cove. The “near” is important because this is mangrove country and there’s a muddy mangrove stream, incongruously named Sweetwater Creek.and dense tropical undergrowth between the resort and the beach.

Palm Cove is one of those over-developed single street settlements which stretches along a beach, where every building is either a block of apartments (never more than four storeys), a hotel, a boutique motel or a shopping precinct with coffee shop, gift shops and tropical clothes shop. At one end of the town is the jetty where the boats which travel each day to the Great Barrier Reef stop and pick up passengers

But Sea Temple is removed from the main town. It lies some hundreds of metres to the south. There’s a pleasant, well-cleared path and wooden bridge down to the beach. The resort’s stretch of beach is a narrow strip of sand with deck chairs for those who want to enjoy the tropical sun. Like so many tropical beaches, there is nothing very special about the warm, rather murky waters which, protected from the force of the Pacific Ocean by the reef, quietly lap against the shore. It is not possible to swim in the summer months because of the likelihood of deadly jellyfish and Sweetwater Creek has to be a very tempting accommodation option for the local crocs.

There are strict planning laws in this part of North Queensland and consequently Sea Temple is located amidst a particularly beautiful stand of mature melaleucas. At certain vantage points – from the balconies of the bures for example – you’ll feel as though you’re deep in a melaleuca forest.

Thematically, Sea Temple is a hotel obsessed with water. The tinkling sound of running water greets the visitor at every turn. There are water feature walls, small pools of running water which edge the bures, and the centre of the hotel features three swimming pools – a wading pool is available for children and non-swimmers; eight apartments have their own plunge pools; there is a large pool for general swimming and for people wanting to do laps; and there is the lagoon which lies between the bar and hotel’s north wing.

There is an aesthetic coherence to the rooms, which again feature contemporary Asian style reinterpreted to the tropical environment. Thus the apartments and bures all have a wonderfully clean, light feeling which is enriched by the use of light and water, the two dominant themes in the hotel.

Each apartment features ceramic vases from Vietnam, woven sisal floor rugs and bed cushions in hand-woven cotton and raw silks from India and bedside tables and wall consoles from Malaysia. The outdoor daybed and coffee table are from government-controlled plantations in Myanmar and most of the other furniture – the timber dining table, leather weave chairs, living room sofa, coco twig trays, almond laminated trays – are from the Philippines.

The penthouses seem to be designed primarily for entertaining. The roof, accessed by a spiral staircase, includes a spa bath, views across to the ocean and a large barbecue. You can either order high quality meats and other foodstuffs from the kitchen or, if you really want a special night, you can hire the Head Chef, who’ll come and cook your barbecue for you.

All of the rooms are fitted out with full-sized fridges and state-of-the-art grillers and ovens, except the studios, which are five-star hotel rooms.

The hotel restaurant offers a Mod Oz style of cuisine and boasts an extensive Australian wine list. The only overseas wines available are sauvignon blancs from New Zealand and French champagnes.

Like Silky Oaks, Sea Temple is serviced by all the main mainland tour providers. Sea Temple does not deny entry to children, but for them it’s not an ideal accommodation option. It has no children’s menu, no kids’ club and no specific facilities for children.