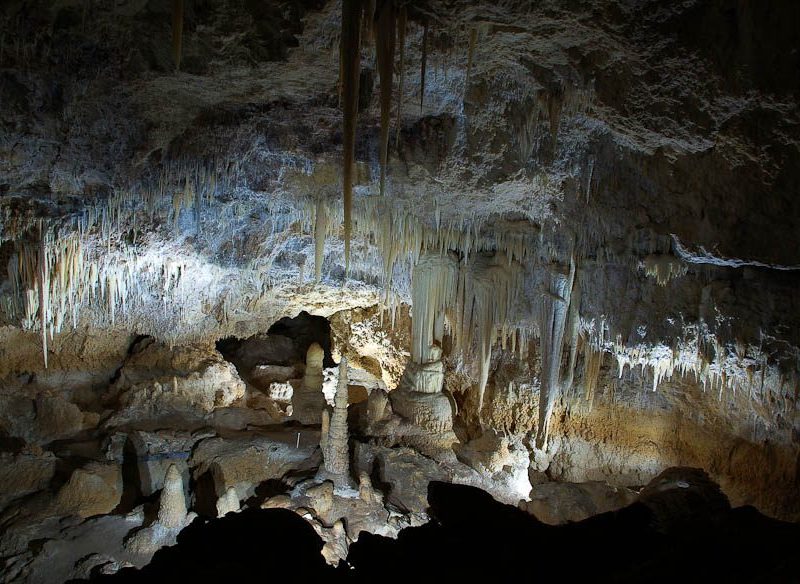 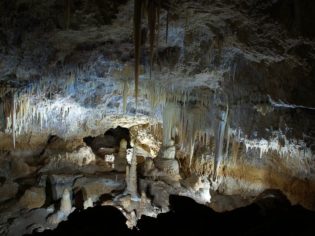 Looks like we have to give abseiling a miss,” Mick Dempsey, owner of Margaret River Climbing Co, says as he peeks out from under his rain-soaked hooded jumper.

My husband and I nod as Mick explains our would-be plans, which consisted of abseiling down a sheer coastal cliff. Perhaps I owe these weather gods a favour – dangling off a cliff sounds a little, uh, terrifying.

Mick takes us to ‘Plan B’, Dingo Cave, one of over 150 caves in the Margaret River region. We stand at its entrance – a discreet, small hole called a ‘solution pipe’ in the middle of the bush. No one can enter the caves without a proper permit and a qualified guide like Mick, who has been running Margaret River Climbing Co for seven years and climbing since he was just 11 years old.

“We’ll still get a taste of abseiling,” he says as we suit up in our safety gear. It’s only 12 metres down the solution pipe. Not too hard a task… or so I think until I am edging down the dark hole backward. My poker face is thwarted by my shaky hands. I’m a clear beginner at this but everyone makes it to the bottom without any dramas.

Once inside we are faced with a series of tight squeezes and curved passages, and despite the cold outside, we work up a sweat in no time. This is no easy walk in the cave – definitely not for claustrophobes. Perfect for yogis, though.

As I attempt to manoeuvre my shaky body down a narrow vertical drop, I hear shuffling above me. In perfect synchrony, I look up as dirt crumbles down from my husband’s slipped foot and into my mouth. The spluttering fit that follows coincides with the discovery of more dirt in my pants. This is the real deal caving adventure.

Our next obstacle is of the horizontal kind. We conquer it lying on one side and shuffling through the small opening in the rocks. After some more twists and turns, we are almost 50 metres below ground.

But the tour is not all about body contortionism. We also peer up through a long crystal geode in the roof filled with sparkling crystals; we hang over the edge of a rock to see a dogtooth spar crystal shaped like a Christmas Tree; and then Mick asks us to turn our lights off to sit in pitch darkness and cover our eyes. I am instantly wary. On edge, even.

Mick laughs and tells us he once guided an Irishman through Dingo Cave who had similar concerns. “You’re not going to take your clothes off, are ya?” he had apparently asked.

Not quite. With clothes intact we open our eyes and focus our gaze on the direction of Mick’s voice where a crystal above his head is glowing. We ooh and ahh at the trickery – Mick has trapped light inside the crystal with his torch. Then we begin our crawl back through the maze to the entrance.

As we exit the warmth and peace of the cave, we are hit with hail, though we don’t have to brave the outside elements for long – our escapade with the underworld is not quite over.

We farewell Mick and move on to the Jewel Cave Visitors’ Centre to meet Steve Harrison, a former biologist and attractions manager of Augusta Margaret River Tourism Association, which manages four of the caves in Margaret River. We are visiting the recently reopened Moondyne. Until last year, it was closed for almost 10 years to improve its infrastructure, making it more accessible and safer for people to visit but also minimising the impact of tourism on the cave itself.

“We made the necessary investments, got the systems in place, undertook the training and put Moondyne back on the list of things that visitors can experience, as it should be,” Steve says.

Moondyne is a less adventurous cave than Dingo, but it makes up for that with its fascinating history. The exact date of the cave’s discovery is debatable – an article dated 1848 suggests it was one of two caves discovered by a Mr G. Turner, while a book from 1879 claims it was found by Fred Grange and ‘Moondyne Joe’ – legend has it that this infamous bushranger hid out in the cave during his hey day.

But the cave’s history extends back much further than Moondyne Joe – a sample of calcite taken from the cave dates back more than 627,000 years. Steve also explains that remains of mega-fauna – including a giant, short-faced kangaroo and a wombat the size of a rhino – were found here in the early ’90s by palaeontology expert Lindsay Hatcher; as well as a skeleton of the ill-fated Tasmanian Tiger. “The caves allow us to put our human timescale into perspective against the timescale of our planet,” Steve adds.

Whilst we are staggered by the historical significance of the cave, we are also impressed by its beauty. Snowflake Chamber, which we access by crawling through a low tunnel (the only place you’ll really get dirty in Moondyne), is decorated in white sparkling crystals and glass-like helictites that have curled and twisted together on its roof. In the Main Chamber, the Tower of Babel is the biggest stalagmite that has been found in WA. In the Coronation Chamber, we pass a formation that looks like a throne. And deep in the back of the cave, karri tree roots – that can grow over 70 metres – have broken through the cave floor to form ‘rootmites’.

Early exploration of the cave is evident through signatures in perfect cursive on the limestone walls dating as early as 1881. Some early vagabonds even attempted to dig from Moondyne to nearby Jewel Cave, but thankfully stopped after a few metres. Their efforts remain unfinished at the bottom of the cave.

At every turn, drop and roll the torch light reveals an incredible formation, fascinating history or, in the case of Dingo Cave, another body-bending obstacle. And so, a Margaret River caving experience can be what you want it to be – an education, an adventure, an admiration of nature’s endurance – or a refuge from the rain, hail or shine. It was all for me.

Moondyne Caving Experience has a three-hour tour from $95 per adult and $65 per child. Contact Caveworks on 08 9757 7411. See margaretriver.com

The Dingo Cave tour with Margaret River Climbing Co is an active tour with some tricky obstacles. Make sure you wear sneakers with good grip and old clothes – you will get dirty!

Moondyne Experience is a great option for young and old alike. It’s only available from June to December and includes a complimentary visit to the neigbouring spectacular Jewel Cave. A caving suit is provided.

Megan Arkinstall discovers a wilder side to Margaret River: by air, land and sea. By air... We are just about to touch down at Perth airport, where ...

Margaret River: a locals guide to where to stay and eat

Where the well-heeled and well-fed come to indulge in wine and waves in WA’s picturesque south-west corner, as well as 150 local wineries dotted ar...

Where to eat, sleep and play in Margaret River