Cape to Cape Track, WA: a hike into ultra luxury 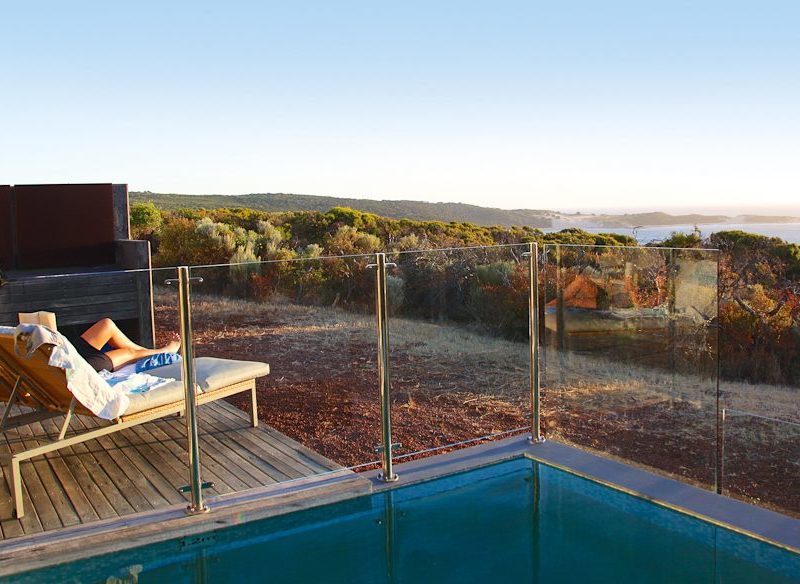 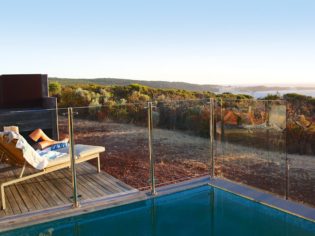 The rest after the recreation: Relaxing on the deck of Injidup Spa Retreat (photo: Fleur Bainger).

Puffing up granite outcrops by day and luxing it poolside by night makes for a blissful hiking holiday. Fleur Bainger combines nature with nurture on the Cape to Cape Track in Western Australia’s Margaret River region – and comes out on top

My fork-in-the-road moment comes at 10:28am on day two. It’s a problem countless hikers have faced, with a 50 per cent probability of getting it wrong: do I take the left track, or the right track?

Squinting at the map, my walking buddy and I are flummoxed as to our exact location on WA’s 135-kilometre Cape to Cape Track. But it matters not, for we have a GPS gizmo that sends our co-ordinates – via satellite – to our hosts the second we fire off the pre-loaded, “Help me, I’m lost” text message. Nice. And lucky.

In the 20 minutes it takes for a response to come through, we resolve to take the right track. Then our gizmo beeps: “take the left route”. Ah.

Treading a self-guided trail through Margaret River’s rugged coastline and sky-scraping forests may not sound luxurious per se, but with all the bells and whistles hung on the experience by Walk into Luxury, it is.

Walk Into Luxury does Cape to Cape in style

The fledgling business hasn’t even launched yet, but its 30-something owners, Nikki and Adam King have granted AT a sneak peek at their offering.

“It’s pretty awesome when you’ve had a big day and you can end it somewhere lovely with a glass of wine,” says Nikki, a travel-obsessed lawyer who’s based a trio of experiences on the effort-and-reward-style escapes she and her draughtsman husband love.

“You’ve been outdoors in the fresh air, but you’re still getting pampered a bit. It’s really making the most of a holiday.”

Walk into Luxury has you toiling by day, and living it up by night. It books you in to five-star retreats with ocean views, pools and spas. Its drivers transport your luggage from hotel to hotel. They pick you up in a chopper and deliver you to degustation lunches (paying homage to Adam’s aerial marriage proposal that epitomised the pair’s passion for the region).

There are post-hike massages, private wine tastings and in-villa chefs. Tell me these aren’t the perfect partners to days of trekking along 40-metre-high cliffs, splashing in glassy rock pools and trudging along photogenic beaches? You end each day spent, but spoilt.

We strike out from Small Luxury Hotels-listed, Smith’s Beach Resort, me still dreaming of the confit duck I devoured at its on-site restaurant Lamont’s the night before. I’m wearing a new backpack, thoughtfully filled with a gourmet lunch box of locally produced treats, a first-aid kit, track guidebook, aforementioned GPS and a two-litre water bladder. Sunscreen is clipped to a rung on the bag. All I’ve had to do, really, is tie up my shoelaces.

Granite in these parts is dated at between 600 and 1500 million years old, while the limestone ridge that the track follows has a mere two million years under its belt. Rounding a peak, we draw breath at the vista of the cobalt Indian Ocean meeting honey-hued sands and people-free swimming spots.

One of these, ‘The Aquarium’, is a local favourite and as I glide through its bottle-green water, glimpsing rocks through crystalline liquid, I can see why. Back on the trail, the air is stung with the perfume of native shrubs and the longer lasting scent of some 2500 wildflower species, which mainly bloom from September to November.

A colour wheel of greens and yellows borders the trail, and as we walk higher above sea level, the sandy soil turns mission brown.

When the sun is high in the sky and there’s little-to-no shelter from it, my crimson cheeks welcome the fact that our accommodation Injidup Spa Retreat is in sight. Still puffing from the hill climb, I sink into the leather couch in our air-conditioned, ocean-facing villa before spying its plunge pool: moments later I’m in.

The fridge is filled with canapés and local wines, plus alcohol-free grape juice by Voyager Estate. A breakfast hamper is on the bench and fluffy white towels beckon. Motivation to leave this haven is found only in the lure of a multi-course dinner at nearby The Studio Gallery; the chef there lists Vue de Monde and Tetsuya’s on his CV.

The restful evening more than prepares us for the following day’s hike through a karri thicket of white toothpick trunks that rise up to 60 metres high. And there’s the promise of a relaxing massage chaser. GPS?

Check. I sure won’t be risking a wrong turn today.

Getting there: Depending on the package, the Walk into Luxury tours start at two different resorts in the Margaret River region, an easy three-hour drive south from Perth.

Need to know: Bookings open in June, with trips starting late August. You can add a guide and private car/limo/helicopter transfers from Perth.