7 of the best Aboriginal Rock Art sites in Australia Seven of the best places in Australia to see Indigenous art as it was intended.

Indigenous rock art is a way of telling and preserving stories from a time when Aboriginal Australians first settled in Australia, between 60,000 and 80,000 years ago.

Precious rock art is a way of preserving and transporting Aboriginal ethos and philosphy, and is evident in rock art that dates back more than 20,000 years.

Rock art preserves Aboriginal culture, it passes it on to future generations and is centered entirely on story telling. It’s used as a backdrop to record knowledge of the land, events and beliefs of Aboriginal people.

All the academics agree that Kakadu holds one of the world’s greatest concentrations of rock art; approximately 5000 sites have been recorded, a further 10,000 are thought to exist and these are just a sliver of the total body of art on the Arnhem Land Plateau. 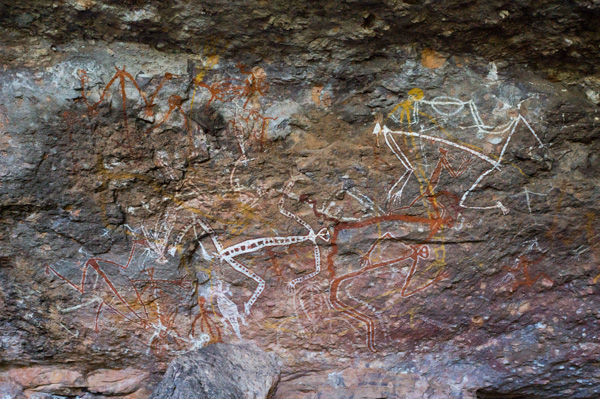 The paintings, estimated to range in age from 20,000 years (and probably a lot older) to the recent past, constitute one of the longest historical records of any group of people in the world – one of the reasons that Kakadu is a UNESCO World Heritage site.

At Nourlangie there is a terrific depiction of the Lightning Man Creation Ancestor Namarrgon, as well as his wife Barrginij and their children, the Alyurr (Leichhardt’s grasshoppers).

Nanguluwur offers hand stencils, dynamic figures in large head-dresses carrying spears and boomerangs, a two-masted sailing ship and figures such as Alkajko, a female spirit with horns and four arms.

Apart from a painting of a Tasmanian tiger, which became extinct on the mainland about 3000 years ago, much of the art at the Ubirr site is less than 1500 years old with examples of x-ray renderings of fish plus contact art including white fellas smoking pipes with hands on their hips.

All three sites have extensive signage and viewing platforms for self-guided tours. Ubirr and Nourlangie have free ranger tours.

There are remote rock art sites across the Kimberley; many are difficult to access. Kimberley rock art falls into two distinct categories: Wandjina and Gwion Gwion art. The thin, elongated and elegantly drawn Gwion Gwion, dated to at least 17,000 years, are painted in hematite ochre that has bonded with the rock and appears as stains with no trace of any surface pigments.

King Edward River Crossing (Munurru) has two excellent sites with Wandjina and Gwion Gwion figures. The walk to Mitchell Falls features two un-sign-posted shelters, one with Gwion Gwion figures up high and Wandjina figures down low, and the other (tucked behind a curtain of water at Little Merton Falls) shows remarkably naturalistic animals.

“To say this is a menu board for hunting is a very simplistic reading of this art,” says Chris Brown, nicknamed Browny, who has worked with the traditional owners here for many years. “I think of this place like an Indigenous cathedral, a place of contemplation, and that these figures are some of the creation deity.”

You can explore Munurru and the Mitchell Falls walk on your own or on an Outback Spirit tour with Browny as a guide. Or you can take an Indigenous-guided tour through remote Kimberley country. Orion Cruises, True North and Aurora Expeditions offer on-shore tours of rock art at Raft Point.

Professor Paul Tacon of Griffith University recommends the large body of Quinkan rock art, dating between 15,000 and 30,000 years old, on the sandstone escarpments around Laura (famous also for its dance festival). Quinkans are spirit beings unique to this region, made famous in the children’s book The Quinkins [sic] by Percy Trezise and Dick Roughsey.

The Quinkan and Regional Cultural Centre features an interpretive display explaining the art, registered on the Australian Heritage Commission and which manager Lex Bloomfield says is the best-kept secret in Queensland. The rock art galleries feature figurative paintings, stencils and engravings.

You can do a self-guided tour of Split Rock, take a three-hour Indigenous-guided walk of the Split Rock and Yalangi galleries, or take a guided 4WD tour to the Quinkan Galleries, Mushroom Rock and Giant Horse Gallery. The Trezise family also offer guided tours to the Brady Creek site, Emu Dreaming and Giant Wallaroo rock shelters at Jowalbinna Rock Art Safari Camp. The environs of Nitmiluk National Park have some of the oldest art found in Australia. While some of these sites are not open to the public, there is still some fascinating rock art including a women’s business site and a boy’s initiation site, both of which feature the whole sweep of Arnhem Land painting styles including naturalistic, dynamic and x-ray art.

The Jawoyn Association Aboriginal Corporation-owned Cicada Lodge offers two different tours by helicopter to the women’s business site and the Nipbamjarn boy’s initiation site. Both include a guided tour of the rock art shelters, a swim and gourmet picnic. There is also rock art to be seen on the Nitmiluk cruises in Katherine Gorge. The Flinders Ranges is home to the Adnyamathanha or ‘rock people’ and has several publicly accessible ancient rock art sites according to Joc Schmiechen, rock art researcher and Aboriginal tourism consultant. These include ochre paintings at Arkaroo Rock, which depict the creation story of Wilpena Pound; engravings of circles, tracks and goannas at Mount Chambers Gorge; and art at Yourambulla Caves.

There are interpretive signs for self-guided tours of Arkaroo Rock, Mount Chambers Gorge and Yourambulla Caves. Indigenous-guided tours of engravings at Red Gorge and ochre paintings at Malki are offered by Iga Warta Experience.

Professor Jo McDonald says there is a huge amount of rock art on sandstone platforms all around Sydney with around 400 rock art sites – mainly engravings – in Ku-ring-gai Chase National Park alone. While there are more than 20 whale paintings in Ku-ring-gai Chase, the most accessible rock art is along the Basin Track, with 50 engravings of almost life-size humans as well as deities and animals such as wallabies, fish, penguins, kangaroos, eels, fish and a man with an axe at the Resolute Engravings Site.

There are interpretive signs for self-guided tours of the Basin Track shelter and Resolute Engravings Site. Go in the early morning or late afternoon for best visibility. Discovery tours with Indigenous guide Les McLeod are offered intermittently to learn the stories behind the art.

With around 250 rock art sites spread across five spectacular sandstone ridges, the Grampians National Park (also known by its Indigenous name Gariwerd) has 90 per cent of the rock art in Victoria. Highlights include a large red and white ochre painting of the Bunjil Creation Ancestor, ceremonial dancing figures and large white (European) figures on horseback in Ngamadjidj Aboriginal Art Shelter, which the indigenous people thought were ghosts, plus hand prints and Giant Emu footprints at Gulgun Manja, a boy’s initiation site.

Take the Bunjil Creation tour or the Six Seasons Tour with an Indigenous ranger from Brambuk Cultural Centre.