Here's why everybody loves the Sunshine Coast There’s a creative undercurrent changing the face of the Sunshine Coast. We dial in to find its epicentre.

A lot can happen in five years. It feels like only yesterday that there were no late-night music venues on the Sunshine Coast, and locating a cafe that didn’t belong to a franchise was an impossible mission. The Maroochydore CBD was in the doldrums and visitors to the coast were mostly operating on autopilot, driving straight to Noosa’s golden sands.

Trying to find a restaurant with any atmosphere, or being seated after 7pm, was also a challenge. The heart of the coast was equally blessed and cursed, with local surf clubs and fish and chip shops still retaining much of the holiday romance – and patronage – that has kept the place kicking since the Sunshine Coast was officially given its sunny moniker 50 years ago.

That’s all changed – and the catalyst was a brownie. Three years ago, baker Alita Johnson put the finishing touches on one of her cakes and placed it on the counter of the beautiful new cafe-cum-photographic gallery she had just opened with partner Matthew O’Brien on Maroochydore’s Ocean Street. Instagram went into meltdown. The sheer creativity lavished onto the top of each of her mini brownies and baked cheesecakes – swirls of frosting, edible petals, crunchy macadamia praline and drippy caramel – at TOME were unmatched by even the most fervent sweet tooth’s fantasy. From left to right: An evening surf at Maroochydore Beach; Surfboards for sale (photo: Kara Rosenlund).

Monthly night markets had started up a year before on Ocean Street, too – the passion project of local not-for-profit, the Maroochydore Revitalisation Association (MRA) – to inject some life back into the CBD. So, fuelled by sugar, pop-up bars, and the opportunity to embrace life after dark with two hands, locals and visitors to the coast sat up and started paying attention.

“I think the coast has found the value in creativity,” says James Birrell, director of Maroochy Music and Visual Arts Festival (MMVAF) and vice president of the MRA. “Over the last five years we’ve gone from [being] a place with nothing to do to a place where we’re spoiled for choice.”

While on one hand the Sunshine Coast is all about sun, surf and sand, clean eating, SUP yoga, and farmers’ markets, on the other, you’ll find chic new whisky bars, local craft breweries, and underground live music venues all contributing to a new creative undercurrent, driven by young entrepreneurs.

Events like MMVAF and the Big Pineapple Festival – a music festival in the grounds of that iconic ’80s ‘big thing’ – have put creativity back on centre stage, and the core of the Sunshine Coast back on the radar for travellers. “People are craving experience and I think events are developing and jumping onto whatever experiences are in vogue,” says James. “We’re really trying to put the visual arts on the same pedestal as the music, which is difficult as the audience is just used to going to a music festival.”

Sara Dillon, co-owner of Little Boat Espresso, faced a similar challenge when she first opened her Marcoola cafe. “It took ages for people to change. I mean, people would just look at our menu [which includes dishes like okonomiyaki pancakes with pork belly for breakfast] and walk away,” she says. “They wouldn’t even give it a go, just because we didn’t want to do bacon and eggs. It was quite heart-wrenching at the start, but I just didn’t see the point in doing something everyone else was doing, and I still don’t.”

Creating mini destinations within the coast – away from the tourist strips of Mooloolaba and Noosa – is what businesses like Little Boat do best, and when Sara and her business partner, Leon Russell, opened sister cafe, Winnie, in the under-the-radar town of Woombye in February this year, it didn’t take long for word to spread. “On the weekends we get smashed with people from Brisbane coming up for day trips,” says Sara. “I guess because it looks cute!”

The upside of the renewed energy and creativity bubbling away on the coast is the sense of pride that emanates from these businesses, and in turn prompts more young locals to have a go. “Rather than people moving away, which we’ve thought about as well, now I feel like I should stay here and build something,” Sara continues.

Building a platform to showcase the Sunshine Coast’s surf history was one of the underlying motivations for Mitch Surman when he and partner Brydie Blackburn (along with friends who have since sold their share) opened Glass Coffee House & Surf Gallery in Cotton Tree in late 2014. Here, salty-haired patrons congregate under umbrellas out the front or munch on avocado toast inside, surrounded by surf paraphernalia. “I don’t always get time to tell people why the boards are in the roof,” says Mitch. “But because we have a lot of those boards – one of my friends is a collector – we’re able to showcase what was made back then.

“There’s such a rich history in surfboard design, and surfboards in general, on the coast that I wanted to showcase that and pass it on.” But it’s not just the old logs on display – Mitch is also a surfboard shaper, inspired by those who came before him and making his own stamp on the industry with his MS Surfboards creations; lined up like nine-foot pieces of art inside the cafe. Dreamy surf photography by close friend Sebastian Robison adorns the walls in large white frames.

Having a place to display their wares was also the driving force for the boys behind local craft beer label, Your Mates Brewing Co. Matt Hepburn and Christen McGarry quit their jobs in 2013 and officially launched Your Mates out of a Moffat Beach shed in 2015. Since then they’ve sold over 30,000 litres of beer and in September last year they seized the opportunity to expand their brewing empire in a disused storeroom to Nambour.

What was once the thriving epicentre of the coast in the 1920s, the old sugarcane town suffered a stigma for years until creatives blew out the cobwebs and started opening quirky bars, live music venues, wholefood cafes and co-working spaces. Having a beer in The Basement feels just like hanging out at a friend’s house in the late ’80s. The brick-lined flagship is filled with tall concrete-topped tables and overstuffed brown leather lounges, while a vinyl collection beams out Fleetwood Mac and Bob Dylan and a pool table takes pride of place. Here the Mates’ full range is poured freely, while also giving a stage to local musicians and comedians.

“I think a lot of people have understood that if they express themselves creatively it helps define the identity of the coast and each little experience or art piece or moment that happens helps build that identity,” says MMVAF director, James. “Everyone’s celebrating creativity and becoming quite entrepreneurial about it.”

Whether making art with food, craft beer or a music festival, there’s cause for celebration in this pocket of the coast, with its magnum opus seemingly just around the corner. If you start looking, you may be the first to find it.

Maroochydore is a 90-minute drive from Brisbane. There are direct flights to the Sunshine Coast Airport in Maroochydore from Sydney, Melbourne and Adelaide.

Where to stay on the Sunshine Coast

Where to eat on the Sunshine Coast 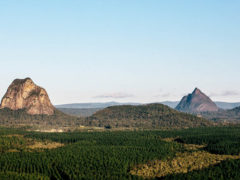 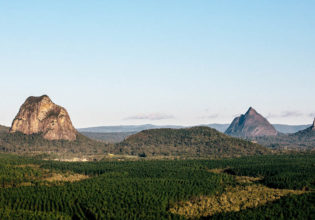 Celeste Mitchell skips the lengthy reservations queue and heads straight to the new bar within the grounds of hatted Sunshine Coast restaurant, Spirit...