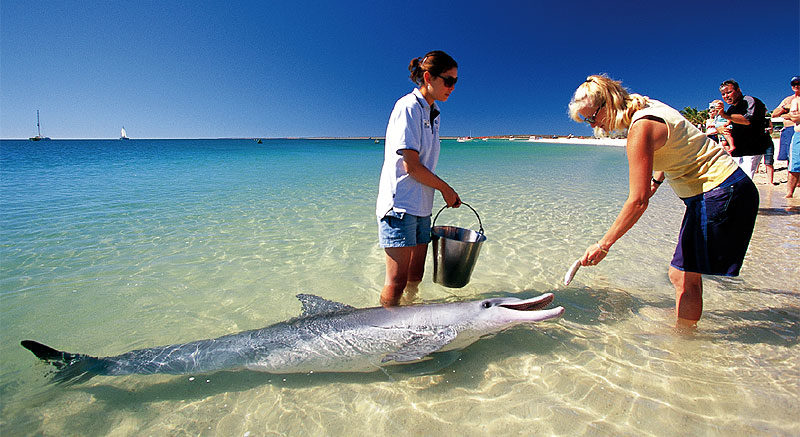 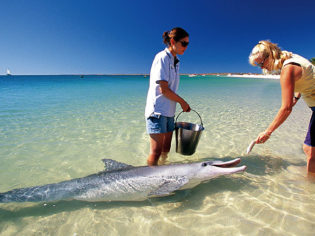 Imagine watching a man who has never set foot in the ocean feed a wild dolphin by hand. At Tangalooma Island Resort, Mike Larder witnessed just such an encounter between a landlubber and a wild creature from the deep.

He stands, crotch deep and quivering with anticipation. Semi-immersed in the lapping shallows of Moreton Bay, he’s clad only in a pair of maroon Y-fronts. Embarrassed not one whit by his flabby, middle-aged near nakedness, he remains oblivious to the amused grins from the others lined along the beach more sensibly sealed inside warm rubber wetsuits, all patiently awaiting the theatrical arrival of the marine prima donnas they’ve come to see.

A chorus of “Ahhhs” greets the pod’s acrobatic floorshow. A fusillade of flashguns sparks from a hundred cameras. Shoals of tiny fish scatter in fright at the sudden arrival of these major predators with the beguiling smiles.

Most of these rubber-clad people have travelled from far and wide to experience an up close and very personal dalliance with these fishy mammalian showoffs, a seriously pro-human pod of Inshore Bottle Nose dolphins.

Minutes earlier the portly Asian gentleman had wandered onto the beach, casually removing his slacks, jacket, shirt and loafers and folding them neatly in a pile on the sand. Now he tiptoes daintily into the shallows, chattering in Chinese and giggling like an excited child. Expectation is high. The warm winter sun sinks reassuringly in the west, leaving behind a crimson afterglow that silhouettes the Australian mainland some 40km distant across the Moreton Bay Marine Park.

Moreton Island is an ancient geological speed bump in the Coral Sea, a sandy bulwark protecting Brisbane from the tempestuous tantrums of the Pacific. Dolphins abound within the safety of its extensive marine and environmental protection zones, and Tangalooma Wild Dolphin Resort basks on the western beach of the island. At the resort jetty the evening ritual is about to begin.

With theatrical timing our famous guests swoop out of the night, streaking through the shallows like rubbery grey torpedoes. Like a veteran vaudevillian tumbling act they perform a lively aquatic warm up, several male adults and a matriarchal female closely shadowed by her calf, all twisting, twirling and rolling. A chorus of “Ahhhs” greets the pod’s acrobatic floorshow. A fusillade of flashguns sparks from a hundred cameras. Shoals of tiny fish scatter in fright at the sudden arrival of these major predators with the beguiling smiles.

Guests line up in military ranks and, clutching small (deceased) fish, are guided into the shallows by resort staff. Members of the pod, all individually named – Tinkerbelle at 20 is the matriarch – break off and swim up to the rubber-suited punters to receive a morsel. Each of the 250kg power-packed creatures, capable of shattering human limbs with the thrash of a tail or slicing off fingers with razor sharp teeth, gently receives the proffered fish.

These dolphins are not taught tricks. They do not jump through hoops or balance balls. They arrive arbitrarily, occasionally not at all. Strict rules apply. Touching the wild animals is forbidden. Hands must be sterilised. The dolphins are restricted to snacking on a small proportion of their total daily food intake.

Female dolphins nudge their young forwards for their first contact with land-based mammals. On rare occasions the more senior dolphins will offer gifts of their own: freshly caught eel or mangled crab. This kind of human/cetacean interaction seriously excites the resort’s marine specialists.

Our man in the maroon Y-fronts is becoming increasingly animated as he’s led gingerly into the circulating pod. Nari, a senior dolphin who survived grave shark injuries early in 2009, approaches the near-naked man, rolling on his side and peering inquisitively into the Asian gentleman’s eyes. Nari gently removes the fishy offering from by now visibly shaking fingers, before flipping the scaly morsel into the air and swallowing it mid-parabola.

It’s all too much for our hero. Overcome with emotion, he yelps hysterically and leaps from the shallows, cavorting back up the beach while clutching his immodestly soggy underpants to his amply proportioned stomach. I later learn from a Chinese-speaking staff member that Y-Front Man has never set foot into an ocean, let alone fed a wild dolphin with his bare hands. His extraordinarily animated behaviour is fairly common around here; strange and life-changing things happen to people when confronted eye-to-eye by a wild creature from the deep.

It’s all over as quickly as it began. The fish buckets are empty, the celebrities satiated. The human dalliance with dolphins is over for another evening. The creatures vanish as swiftly and silently as they had arrived. The lights go down and the show is over.

Notes // The Dolphin Feeding Experience takes place every evening near the arrival jetty and is free for all resort guests, or via daytrips from the mainland at $95 return per person.