A local's guide to Bondi 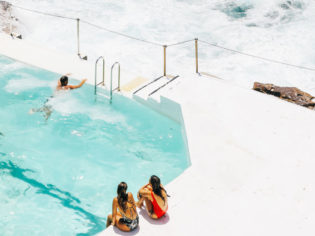 Bondi, sometimes known as the playground of the Pacific, has a lot of overseas cachet. For the well-heeled international visitor it’s a mix of Bohemian surfer chic and the ultimate laid-back escape from the northern winter. For Sydneysiders it’s a mix of awful tourist traps and sophisticated, sexy places to be seen.

Backpackers may keep the cast of Bondi Rescue busy, but here’s our guide to getting away from the tourists and enjoying some of Australia’s best sand, surf and sidewalks. The early colonials considered Bondi nothing more than a colossal sand dune, and bathing was banned until 1906. These days, the beach attracts sunbathers, swimmers, surfers and kayakers, and is the start (or end) point for the popular 6km Bondi to Coogee coastal walk.

North Bondi is home to the rich, famous and heavily mortgaged. A casual stroll along the promenade reveals an abundance of beautiful people.

The surf at North Bondi is usually calmer than it is further down the beach, and is favoured by young families. Kids love snorkelling around the rocks at Wally Weekes Pool, nestled below the rock face at the northern end.

The Bondi Markets are an integral part of Bondi life. Held in the grounds of Bondi Beach public school every Sunday, they feature everything from retro furniture to yet-to-be-discovered fashion designers. This end of the beach is home to one of Australia’s best surf schools, Lets Go Surfing.

Excellent restaurants abound and cover most cuisines and budgets. Watch sunset from Raw Bar over fresh sushi and sashimi, or wander up the hill to Jo and Willy’s Depot for super-sized salads. An inexpensive feed with fantastic views is to be had at the North Bondi RSL, also known as ‘The Rats’. it’s packed on weekends thanks to decent food and drinks at RSL prices. Below the RSL, North Bondi Fish is a stylish, upmarket venue, serving simple and superb seafood fare. North Bondi RSL is located at the northern end of the iconic Bondi Beach, just a stone’s throw from the surf

The pick of the overwhelming number of cafes is Speedo’s on Ramsgate Avenue. Offering great food and coffee without fuss, it’s the first choice of local surfers and celebrities.
Back on Campbell Parade, Sean’s Panaroma is one of Sydney’s most popular restaurants. Chef Sean Moran opened his charming, shabby chic cafe in 1993 and has been serving sophisticated, clever food ever since.

Further along, the Beach Burrito Company dishes up healthy Mexican food – cheap enough for you to throw in a few mojitos too. North Bondi’s best-known hotel option is the Swiss Grand on Campbell Parade, an incongruous architectural mix of style and pompous kitsch. But inside it’s a little tired – some say exhausted.

In the heart of central Bondi is the Bondi Pavilion, built in 1928 and home to the very notorious Bucket List restaurant/bar (and a selection of other quick and easy food outlets), conveniently located change rooms, an art gallery and a theatre. The Pavilion hosts regular events such as the annual Bondi Short Film Festival, food and wine fairs and photo exhibitions. Next door, Bondi Surf Bathers’ Life Saving Club was established in 1907, making it the oldest of its kind in the world. Back from the beach along Campbell Parade, central Bondi is where the tourist traps become pretty thick on the ground, but avoid the tacky souvenirs and ferret out the following gems.

Aquabumps on Curlewis Street is a surf report wrapped in a photography gallery by local legend Eugene Tan, or ‘Uge’ to his mates. Visitors to the gallery are blown away by his images of this celebrated patch of Australian sand.

The place to be seen and party is Ravesi’s Hotel on the corner of Campbell Parade and Hall Streets. The multi-tasking Ravesi’s is a pub, restaurant, cocktail bar, wine bar and value-for-money accommodation. A monthly Zabriskie Book Club adds a bit of culture to the mix. When locals deign to eat around here it will usually be at Hurricane’s Grill & Bar on Roscoe Street for barbecued ribs, or next door at Pompei’s for perfect thin-crust pizza.

Two other food outlets worth a mention are The Original Fish & Chip Company on Glenayr Avenue and Gusto Bondi, where all the cool kids gather in the morning to share their hangovers behind giant sunglasses over fluffy bacon and egg rolls and lattes.

The most up-market venue in South Bondi is the famous Icebergs Dining Room & Bar. Drop in for a cocktail with this year’s ‘it’ crowd or sit down to one of the best steaks in Sydney. Dine downstairs at the Bondi Icebergs Club Bistro – the same view without the price tag. Members of the eponymous Icebergs Winter Swimming Club have been swimming in the pool below for 81 chilly years. South Bondi is also home to underrated and up-market Bondi Beach House, a stylish federation home with nine rooms and shared kitchen facilities just 100 metres from the beach. This end of Campbell Parade has the highest concentration of quality eating places along the strip.

For an amazing walk along a rugged coastline fringed by sandstone cliffs, join Bondi locals on their habitual Sunday walk to Coogee. The headlands are transformed into an outdoor gallery in late October for the Sculpture by the Sea exhibition.

The Bondi hinterland is where local life really happens. Removed from the beach tourist hub, the area has a collection of cafes, quirky bookstores, restaurants and shops, extending
back from Campbell Parade around Hall Street.

The Gertrude and Alice Book Store, named after writers and lovers Gertrude Stein and Alice B. Toklas, serves wholesome meals in a cosy laid-back setting and boasts more than 25,000 titles. For all-day breakfast check out Green’s Cafe on Glenayr Avenue. Back on Hall Street, Blue Orange is a casual cafe by day and a chic, comfortable restaurant in the evening. Similarly, Brown Sugar on Curlewis Street transforms from a beachy cafe by day into a contemporary candlelit venue, serving modern Australian cuisine including a more-ish fish and truffle-oil pie.

For an authentic taste of India try Bombay to Bondi on Hall Street, a lovely little restaurant that is great value for money. It also does BYO, takeaway and home deliveries. Walk off dinner on the way to Messina Gelato down the street for famous selection of frozen gelato.