The changing face of Turimetta Beach 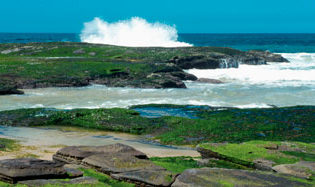 AT reader John MacDonald has been photographing his local secret on and off for years, so he thought it was time to come clean.

A day at the beach is usually pretty good, but this beach is particularly interesting because there are all sorts of discoveries to be found, for those who take a closer look at their surroundings.

At about the halfway point in the chain of around 20 beaches known as Sydney’s Northern Beaches stretching from Manly to Palm Beach, there’s a small, insignificant beach, maybe 350m long, snuggling between Narrabeen and Warriewood beaches known as Turimetta. This beach has never been all that popular and I’ve never seen more than about a dozen people on it at the same time. There is no suburb of Turimetta and the beach isn’t visible from roadways, or even walking along the road at the cliff top.

Until recently there was only a rough track leading down, about 30cm wide and covered in small pebbles. If you slipped you wouldn’t stop until you hit the bottom. Coming back up was also a nightmare, but now there’s a proper set of earthen steps and it’s becoming more popular.

This is one of my favourite beaches for getting some good photos because it’s always vastly different at different times of the year. And although I’ve been photographing this beach on and off for about six years, I’ve not finished yet – I always come home with something different. (I’d hate to think how long it would take me to photograph all of the northern beaches.)

When the tide is high the water is right up to the cliff face and there’s no beach at all. When it’s a bit lower the sand covers everything and it looks pretty boring. But it’s at low tide when it all comes to life; numerous rock formations and a rock ledge leading around the headland to Narrabeen are revealed, along with several rock carvings, including a very good Aboriginal face, a paw print, two birds and a very good goanna. There’s also a near life-size horse’s head carved on a brown, dun-coloured rock. A fish carving about 35cm long (often covered by the sand height) and a padlock with a realistic keyhole carved in it can also be found. (This one is often just visible above the sand level, but when the sand is lower there are initials with early 1800s dates carved on the rock below.)

At different times of the year the beach changes its face dramatically. Sometimes the rocks are covered in a thick, bright green, slippery moss as far as you can see. The top surface of these rock ledges are cracked and tessellated into interesting patterns.

The fishing here must be good too; once while I was set up to take photos a fisherman perched about 20m from me threw his line in, then pulled out a fish, again and again. After less than half an hour he packed up and left with about six shiny silver fish, all about 30cm long. He had enough free food to last all week, and quicker than going to the supermarket. Then again, I’ve also seen people fish at several different spots and catch nothing but a cold.

After your beach discoveries are finished and the walk back up the steps to the road is over, about a kilometre to the right is a little corner shop with salads, cold drinks and beautiful giant-sized steak sandwiches. I can never get away from here without one of them.