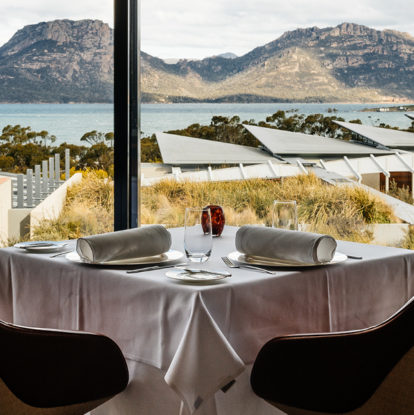 Why Americans fall in love with Tasmania

There was a time when Australia’s island state of Tasmania was viewed as holding little allure for anyone under the age of 70.

Its image on the mainland, and around the world, was of a destination that was a little staid and a bit old fashioned, a retired Aussie’s RV road trip destination (it’s relatively compact at 26,410 square miles, roughly on par with West Virginia) filled with stunning scenery and little else.

But Tasmania has undergone a cultural renaissance of late.

The Museum of New and Old Art (Mona)

The opening in 2011 of the Museum of Old and New Art, or Mona, as it’s known: a groundbreaking subterranean gallery that’s home to one of the most controversial private collections of modern art and antiquities on the planet.

The brainchild of maverick multi-millionaire businessman and gambler David Walsh, this architecturally adventurous site also encompasses its own winery, brewery, bars, restaurants and a set of eight slickly designed pavilions that you can stay in overnight.

Accessible by car or by ferry (highly recommended) from Hobart’s central waterfront precinct, it’s a destination in itself and a top reason people are flocking to Tasmania’s once sleepy capital city.

In its short life to date, Mona has spawned two of Australia’s most cutting-edge arts and music festivals: the summertime (January) Mona Foma – curated by Violent Femmes bassist Brian Ritchie and held in the riverside city of Launceston in the north of the island, and Dark Mofo – a weird and wonderful affair that takes over Hobart for two weeks each winter (June) and is best known for its decadent Winter Feast, controversial art installations and solstice nude swim in the chilly Derwent River.

It has also created the so-called ‘Mona effect’: a wave of creativity and energy that has proven transformative statewide.

“It set an example for what can happen and where it can happen,” says Walsh’s wife, American artist and curator Kirsha Kaechele, who moved to Tasmania in 2010.

“It has helped recontextualize a small town into an interesting place for making art. It also means that great artists, and – through our festivals – musicians are coming through, spending time and providing inspiration for emerging artists.”

“Mona has also brought a lot of high-spending tourists who are eager to support the new guard of cute cafes, stylish restaurants and boutique hotels,” Kaechele continues.

“This then draws more culture seekers, so it’s an upward cycle. Which means creative young people who may have had to move to Melbourne in the past can now confidently take a stab at opening their own restaurant, art space or distillery, and further contribute to Hobart’s rich culture.”

Now mainlanders (the way locals describe anyone not from the island state), and increasingly international visitors are paying attention to what is going on ‘down south’.

They’re discovering that in addition to the gorgeous scenery that they always knew was there, they will also find farm gates purveying top-tier produce, vineyards producing world-class, cool-climate wines, whisky distillers making a name for themselves, and a wealth of great restaurants, bars and hotels that are worth permanently parking the RV for to invest more time in. 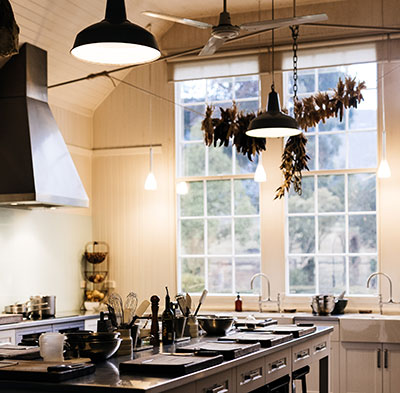 The kitchen at the Agrarian Kitchen cooking school in the Derwent Valley, about 30 minutes from Hobart.

crop of bars and restaurants has sprung up as a result.

Fico, a small bistro in the center of town, is one such example that was opened in 2016 by returned local Oskar Rossi and his partner Federica Andrisani, sensing this cultural shift.

While it might be inspired by the dining rooms of Europe, it’s undeniably Tasmanian in flavor and approach.

“There is a distinct sense of locality when it comes to cooking in Tasmania,” Rossi says.

“We have backyard growers who practise organic permaculture and pick for us the same day they deliver – the flavor of the herbs, arugula, lemons – everything – is incredibly vibrant. We have local fishermen who pull up outside with their boats mid-service and drop off fish that are still breathing.”

“Seaweed, saltbush, abalone, oysters, urchin, wild fennel, wallaby, kunzea, honey, octopus, flathead, smoke.” These are the flavors of Tassie for Analiese Gregory, one of Australia’s most talented young chefs who took the reins of Hobart’s in-demand fine diner Franklin in 2018.

Having worked at some of the world’s best restaurants in Australia and Europe including Quay, Sydney and Mugaritz in the Basque country, Spain, Gregory now calls Tasmania home.

“After I moved I fell in love with it, of course: the beauty, the wildness, the air,” she says. “I seem to be drawn to out-of-the-way places.” 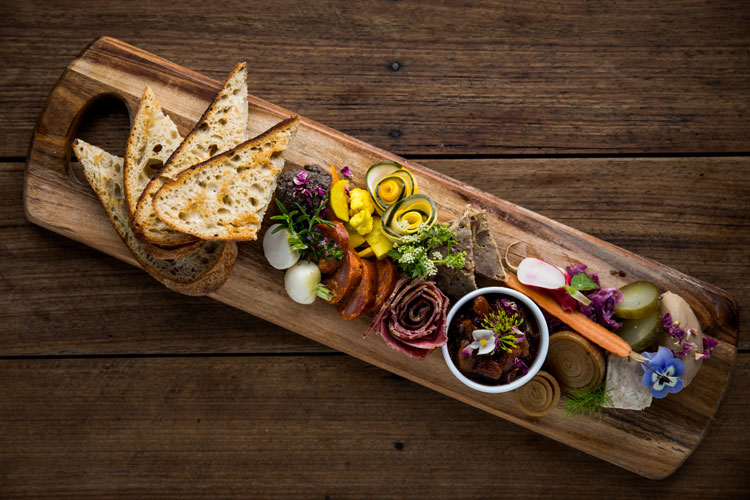 Sample the fare at Willie Smith’s Apple Shed, just 30 minutes from Hobart in the Huon Valley.

Beyond Hobart there are myriad foodie experiences worth traveling for.

From Willie Smith’s Apple Shed  in the delightful Huon Valley, just 30 minutes from the city center, and the Agrarian Kitchen Cooking School & Farm in the tranquil Derwent Valley less than two hours away, to Bruny Island Cheese Co. on windswept outpost of Bruny Island, conquered by a two-hour drive and a short but stunning ferry ride, and Pooley Wines’ winery in the historic, impossibly quaint village of Richmond (23 minutes down the road from Hobart if you want to be precise), gems can be found across the island (and its islands). 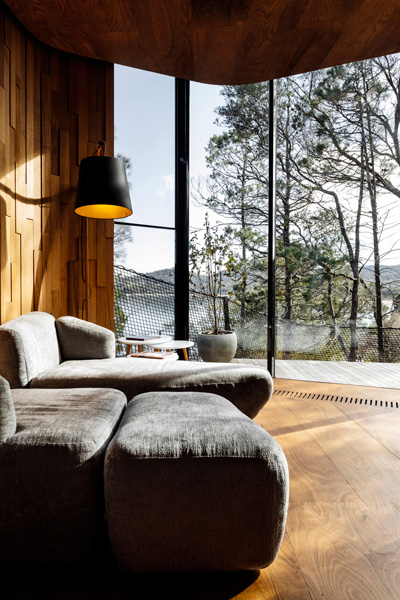 The views of Coles Bay from the living pod at Freycinet Lodge, two-and-a-half hours north of Hobart. Image Alastair Bett

Located on a peninsula on the east coast, Freycinet National Park is known for its pink granite peaks, secluded bays and white-sand beaches.

When luxury lodge Saffire Freycinet opened there in 2010 – its design a direct response to the surrounding natural environment – it was a game-changer.

Not only has it scooped numerous major international awards since, says its designer Robert Morris-Nunn of Circa Morris-Nunn Architects, but also “demonstrated that high-end, bespoke/luxury tourism venues could be created in Tasmania, which is very far from being a typical island destination.”

Since then more unique wilderness retreats have been brought to life: from Satellite Island, south of Hobart, available to hire in its entirety for up to eight guests, to the transformed industrial digs of Pumphouse Point perched right on wild Lake St Clair in the middle of the island.

The new Coastal Pavilions at Freycinet Lodge are another example of Tasmania’s unique take on luxury, indulging as they do in the seclusion of their location to make isolation the ultimate indulgence.

Tasmania’s increase in cosmopolitan and cultural appeals has mercifully not come at the expense of its scenery or surroundings. Rather visitors are now being given ways to combine both.

The island is home to a high concentration of the country’s best walks, and has long led the charge for soft adventure and eco tourism.

Classics include the world-famous six-day Overland Track through Cradle Mountain and Lake St Clair National Park, the four-day Freycinet Experience that takes in the iconic Wineglass Bay, and the four-day Bay of Fires Lodge Walk along secluded beaches on the north-east coast.

With the recent addition of two new itineraries, the offering has been elevated yet again. wukalina walk, a four-day guided walk based around the landscape of the larapuna (Bay of Fires) and wukalina (Mount William) is the first Indigenous-owned and operated tourism venture in Tasmania and has already garnered a top international architecture award for its exquisitely considered krakani lumi lodge.

Crafted from the natural materials it’s enveloped by, it speaks to the stories of Tasmania’s Indigenous palawa people. 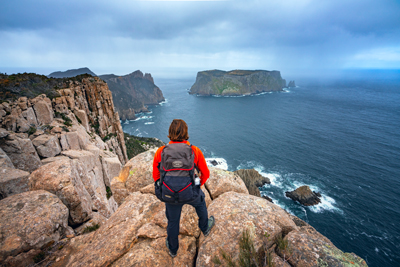 The view towards Cape Pillar and Tasman Island on the Three Capes Walk, on the southern tip of Tasmania.

Further south, the Three Capes Lodge Walk is a four-day experience in which guests traverse the wild and dramatic Tasman Peninsula by day and relax overnight in exclusive lodges that are, says Tasmanian Walking Company co-owner Brett Godfrey, fully self-sufficient and 100 per cent off-grid.

“It means they’re not truly like a six-star hotel but people appreciate that what you’ve got in the wilderness is in some ways better,” he says.

So, as the creative upswing continues and the outdoor offerings become ever more enticing, all made in response to Tasmania’s enticing beauty and abundance, now is the time to get there – before everyone else catches on.

The Spirit of Tasmania is a ferry service that operates between Melbourne and Devonport on Tasmania’s north coast.

Twin ships depart each port at 7:30pm and arrive at 6am the following morning; during peak season (September to April), day sailings are also operated, departing each port at 9am and arriving at 6pm.

A variety of onboard accommodation options are available including deluxe cabins. 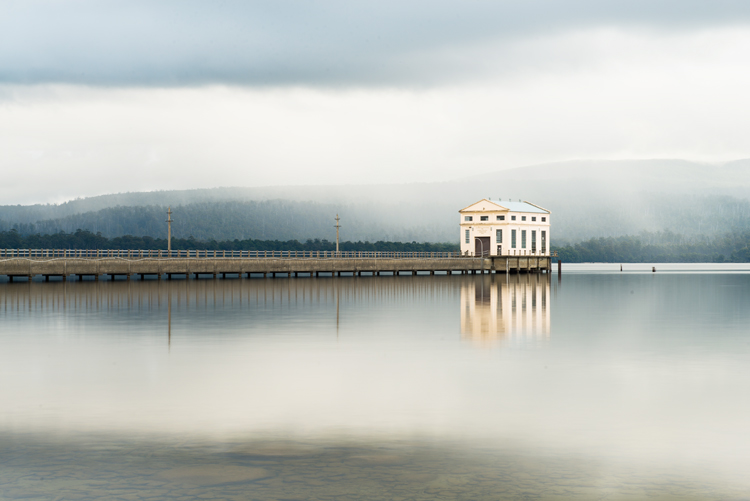 The restored Pumphouse floats tranquilly on Lake St Clair. The original buildings were restored to be reborn as boutique 18 room wilderness retreat.

In the warmer months of December and March (summer into fall) daily temperatures range between 63ºF and 73ºF; winter runs from May through August, with crisp, clear days and cold nights, with temperatures averaging 37ºF to 51ºF and snowfall in some areas.

Check out the Henry Jones Art Hotel, set across a row of historic warehouses and an old jam factory on the waterfront.

Nearby, MACq 01 is a luxury ‘story hotel’ that blends a top-tier stay with immersive storytelling based around the tales and fables that make up Tasmania’s intriguing history.

Located in the heart of the city center, Hadley’s Orient Hotel is a boutique four-star accommodation that oozes heritage style.

And in south Hobart, with views out towards nearby kunanyi/Mount Wellington, the five-star Islington Hotel offers an irresistible blend of modern and traditional architecture.

Try five-star hotel Peppers Silo Hotel – a modern hotel with views of the River Tamar in a repurposed heritage building made up of four towering grain silos.

In the city center, the 4.5-star Hotel Grand Chancellor is a stately option and the Apartments at York Mansion combine heritage architecture with modern facilities. A section of the Overland Track through the Cradle Mountain region of Tasmania.

There’s no shortage of bespoke wilderness offerings to choose from.

Local scallops on the Hobart waterfront; Hobartians and visitors alike rave about Tasmanian scallop pies – pick one up from Salamanca Market on a Saturday.

The rugged outpost of Bruny Island is becoming nationally renowned for its cheeses – sample those produced by Bruny Island Cheese Co. (the creatives here are also responsible for Bruny Island Beer Co.). 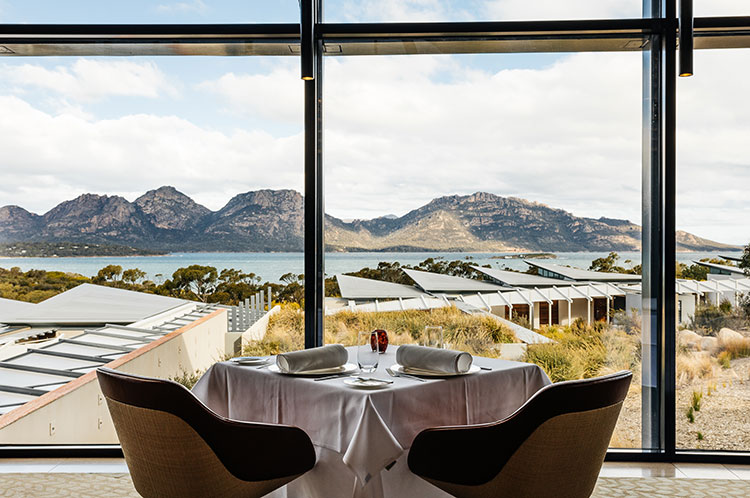 The stunning view across Coles Bay to The Hazards on the Freycinet Peninsula from the luxurious Saffire Freycinet.

Tasmanian oysters are some of the best in the country and Freycinet Marine Farm in Coles Bay, at the edge of Freycinet National Park, is the place to try them; guests at Saffire Freycinet can even don a pair of waders and take to the water here, learning how oysters are farmed and tasting them at the source.

While Tasmania’s cold climate wines are a winner, Hobart’s Lark Distillery is making a name for itself producing malt whisky from the clean, clear waters found here. The amber spirit is on show every year at Tasmanian Whisky Week in August.

The best way to try all that Tasmania has to offer is by timing your visit with Hobart’s Taste of Tasmania summer festival in December.

Always be prepared for Tasmania’s changeable climate. Carry additional warm clothing, even during the summer months, and a waterproof outer layer – especially if bushwalking.

Hobart, TAS
Save up to 10%
Embark on the wukalina walk through the Bay of Fires, explore Hobart’s famous Museum of Old and New Art (MONA) and discover Bruny Island’s wildlife on this 7-day Inspiring Journey.