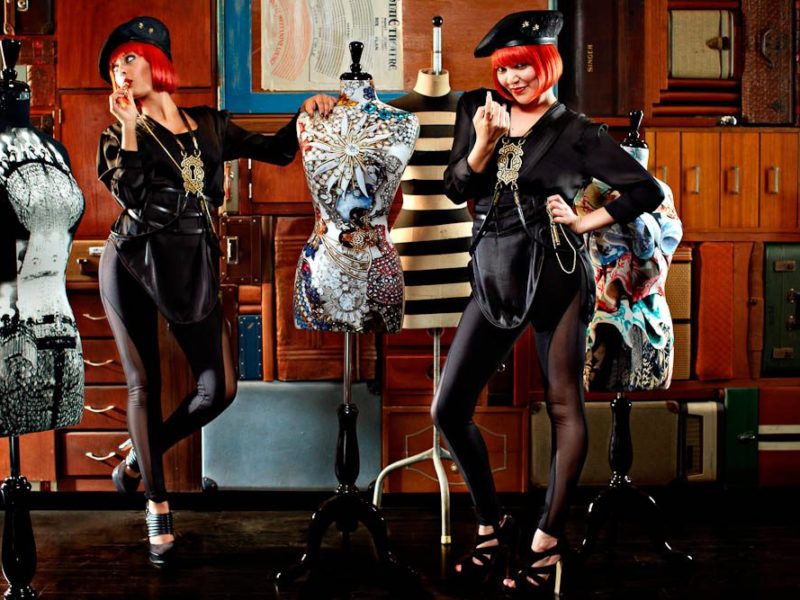 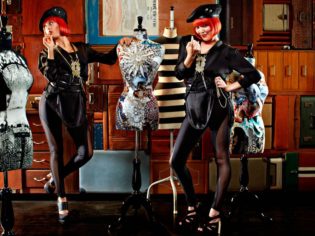 Megan Arkinstall checks in to QT Sydney, the designer hotel with more personality than a cabaret show, for a bespoke weekend of hanky-panky

A fusion of cutting-edge art, bold design, and one-of-a-kind personality, QT Sydney owns the prestige of being the city’s only member of the Design Hotels community, thanks to the genius collaboration from some big-names in the design, art and hospitality industries. Drawing strong inspiration from the two heritage buildings it’s housed in – the iconic Gowings department store and the State Theatre – the hotel oozes dramatic film-noir charm in every nook and cranny. It’s as much a destination as the bustling city it’s nestled in. Here’s why you won’t want to check out.

Blink and you could miss it. Hidden between the flashing bulbs of the State Theatre and the neon white of a giant Top Shop boutique is an inconspicuous coffee shop, which masks the lift leading up to another theatre experience: QT Sydney.

In case you miss the discreet sign as you approach, keep an eye out for the good looking redhead with a fringed bob manning the entrance. Looking incredibly cool in her black Rocky Horror-like outfit, designed by renowned costume designer Janet Hine, she never sleeps; she’s there 24/7. (As is the in-house make-up artist who creates her dramatic look day after day. Now that’s dedication.)

She hasn’t wandered off the State Theatre stage by accident, though the staff here was ‘cast’, rather than hired, reportedly via a speed dating-type interview. (Job requisites? Personality and polish.) This fiery redhead is a concierge, QT-style. She’ll whistle you a cab, organise your valet parking, direct you to the lift and handle your luggage: a self-styled Director of Chaos, baby.

Leaving behind busy Market Street, guests take the lift up to the dimly-lit reception area tucked away on level two of the State Theatre wing (the hotel is split into two; the other half is the Gowings wing).

If the gal downstairs hasn’t already convinced you that you’re not in a cookie-cutter hotel, the reception area will. In charge of the hotel’s public spaces is designer Nic Graham (responsible for QT Gold Coast), who combines the right amount of unique and chic. Art deco, Italianate and gothic features mix curiously well with bright colours and bespoke modern and vintage furnishings. The theatre vibe is apparent with heavy red curtains edged in gold tassels.

As we check in, moving images of gartered legs undressing, pouting lips and fluttering eyelashes dance on the wall behind the front desk, hinting at an element of voyeurism (the plump lips make an appearance on your room key too). According to the hotel’s website, the digital artwork, selected by renowned art curator Amanda Love, provides guests with ‘a visual feast of light and movement’. These digital images are found throughout the hotel; even in the elevators.

Contemporary touches seamlessly blend with the building’s heritage, like the original Gowings timber floorboards that have been painstakingly restored (the buildings went through 17 months of restoration, in fact). Imagine how many feet have walked on those boards since 1929… Other hints of the past include original Gowings doors that open to nowhere on each level of the Gowings wing, and the authentic tiled floors and shop display cabinets in Parlour Lane Roasters on the ground floor.

In the Gowings wing, guest room numbers are indicated by 1940s Hollywood-style lights hanging from the ceiling. On the other hand, the room numbers in the State Theatre wing are exactly that – hands, which poke out of walls holding the room numbers, a lá The Addams Family. Thing makes another appearance in the bathroom, politely holding the magnified mirror as you put on your make-up.

The styling of the guest rooms is the work of designer Shelley Indyk, who filled the QT avant garde brief in her own way by using a crimson, orange and yellow palette with splashes of monochrome and odd ornaments (a silver giraffe here, a ceramic rabbit there), along with a masculine stone-coloured scheme in the sleek and spacious bathrooms.

But the spotlight is on lighting. Two bowler hats hang from the ceiling of each room with a soft glow coming from within. There’s a dividing wall between the bathroom and bedroom filled with citrus coloured glassware – crystal vases, candle holders, jars and ornaments – lit up by a warm orange light and mirrored shelving.

More lighting is discovered beside the bed; within recessed shelves; hiding behind an artificial ceiling; at the top of the mirrors; and in mirrored boxes. Yet, it doesn’t feel lit up like kryptonite. It’s rather moody. One might even say… sexy.

Let’s get it on plays overhead in the elevator. As my husband and I exit, the elevator expresses its disappointment with a loud sigh – then the doors shut behind us.

The quirky QT elevator plays a different song depending on the number of guests – all determined by some smart (and cheeky) software that senses the number of people in for the ride. Elevator silence is replaced by carefully selected music bound to give you a chuckle. Third wheels may feel some discomfort when ‘Stuck in the middle with you’ plays. Single gals may have a Bridget Jones moment when Eric Carmen’s ‘All by myself’ comes through the speakers. It’s proof that QT leaves no hotel corner untouched by theatrics.

Make me a cutie

Despite the elements of kook, the spa treatments here are serious stuff. Past the display of scientific and medicinal contraptions at the entrance to the spa, which pay homage to the building’s heritage, is the urban haven every city-slicker is looking for.

Spa consultant Naomi Gregory has an impressive portfolio overseeing a number of world-renowned spas, including the relaunch of Hepburn Bathhouse and Spa in Victoria. She says that the ‘designer spa experience’ at QT is based on the philosophy that treatments should be individually crafted to each guest. I choose my treatment on the day as part of the ‘freshly-picked’ booking option. Oh, the choices.

Any SpaQ experience should start with a steam in the Turkish-style Hammam steam room (included with every treatment), before slipping on your fluffy black robe. The same delicious robes – made with Oprah’s favourite robe material ‘kashwere’ – can be found in your room, whereby the tag instructs you to ‘consult your credit card’ before robe-napping.

My facial and massage treatment (I couldn’t decide) begins with what feels like a sheet of honey being poured over my body – just a hot towel being placed down ever so gently, it turns out. I leave the treatment room with skin so soft and muscles so relaxed, I look as though I am sleepwalking. Perhaps I was.

Meanwhile upstairs my husband waits, fresh from The Barber Shop with his new, very dashing haircut. This is no ‘cut and run’ service: it’s all about the traditional barber experience in an old-fashioned American barber’s chair; a throwback to the original Gowings barber. It takes time and precision to look this good, my husband insists. He’s right.

For a clean shaven look, The Don traditional shave is the way to go. Is Don, Is good.

In case of emergency

This hotel is not all about the bed – which is basically a cloud covered in fine, thousand-thread count linen – or even about the deep, deep Japanese-style bath. There’s also a lot of silly fun to be had.

The mini bar menu includes a choice of games including pick up sticks, knucklebones, cards… and some instructions on the in-room cocktail maker to help you along (‘Bottoms up’ – why, if you insist, QT).

After a few of those you might be cracking open the ‘kiss with confidence’ mints, or even the ‘in case of emergency’ bow tie – complements the bowlers hats hanging from the ceiling, no?

That’s the thing about this place. It’s a five-star experience, but you’re encouraged not to take yourself too seriously.

Put down the room service menu and step out for the food and the social scene, which is rife at QT. Gilt Bar has a maze of mirrors in its atrium, which overlooks the restaurant below – quite the illusion and trickery; they’re placed so you can watch the goings on at the Gowings Bar & Grill kitchen directly below. (And what a lot of goings on there are – the Friday night crowd here is quite something.)

But there is substance as well as style. Restaurant Gowings made headlines for being awarded a chef’s hat in its first year of trading, thanks to a talented team including creative food director Robert Marchetti, who set up Icebergs Bondi, and executive chef Paul Easson, formerly of Melbourne’s Rockpook Bar & Grill. Wine supremo Ian Cook, of Five Way Cellars, has carefully selected the 120 Australian and international bottles that feature on the 15-page wine menu. (I stop at page three for a glass of the tempranillo – a fine choice, though if you want to delve deeper, enlist some help, there’s no shortage of staff here.)

Between courses guests can watch the magic happen in the huge open kitchen, where the show runs just as smoothly as it does out front. Indeed the cast – sorry, staff – here never miss a beat.

As we depart for our room at 10:30pm, people are still being seated for dinner – it seems the show never stops. But you can always come back for the encore at breakfast… if you can bear to leave the sheets.