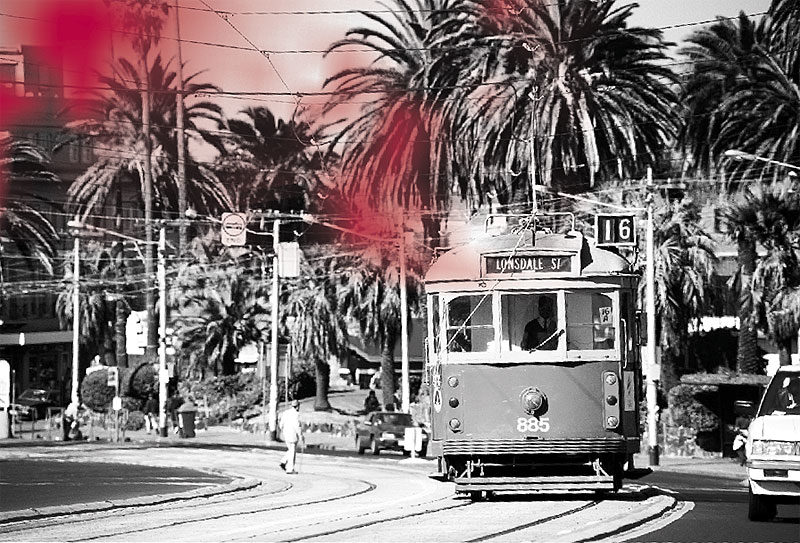 An unofficial Gangland Murders of Melbourne Tour struggled briefly for life in 2004, before meeting an untimely — and unpopular — end. For better or worse, Australian Traveller found someone who was willing to retrace the tour’s steps for us . . . Written by X (in witness protection scheme)

Welcome to Melbourne – home of culture, sport, restaurants, and . . . gangland murders. In the land of Mark “Chopper” Read and that famous guy in the tin helmet – hell, even the Victorian cricket team calls itself the “Bushrangers” – it’s a safe and happy place to live, unless you belong to that “other” kind of family. Since 1998 there have been 25 underworld murders in the Melbourne area, at least a dozen directly related, and many still officially unsolved.

We’re standing here on St Kilda Esplanade, near the life-giving properties of the St Kilda Sea Baths, right on the spot where nearly 20 years ago, outside Bojangles nightclub, Mark “Chopper” Read demonstrated some life-taking properties to drug dealer Siam “Sammy The Turk” Ozerkam. Chopper only ever killed bad people, he tells us, because not only is it morally defensible, it’s more lucrative. So there’s been a lot of it around these parts. And we’re about to get amongst it, in some rather unassuming locations.

If you like a good Quentin Tarantino, this is the tour for you – way more ghosts than your haunted house tour, way more hits than Movieworld. Our transport? An old Police divvy van, of course. You’ll receive your official Gangland Murders of Melbourne showbag, containing crime scene ribbon, body outline chalk and identikit pictionary for the kids, plus your route map and detective quiz. First stop? Just past “Balaclava.”

1. Beaumaris
We stop in a quiet side street, and receive our first detective game clue – our letter is “H” for Holden Statesman. That’s what Frank Benvenuto, son of Liborio Benvenuto, Victoria’s Honoured Society godfather of the ’60s and ’70s, was sitting in here, outside his home, when “someone he knew” gunned him down. Benvenuto was a known associate of the Morans, a name you’ll become quite familiar with by the end of the tour.

2. Templestowe
Continuing in a straight line (was the new Scoresby Freeway designed specifically for our tour?) we reach Templestowe, watching news footage of the 1998 murder of Alphonse John Gangitano, killed in his home by “someone he knew”, yet still an unsolved case. The coroner found “that both Graham Kinniburgh and Jason Moran were implicated in the death.”

3. Strathmore
The Divvy Van heads due west to Cross Keys Reserve, Strathmore, where we receive the letter “A” for Auskick, and the grim procession of crime footage on our screen is relieved by heart-warming shots of little boys playing Aussie Rules in the very park we’re sitting next to. Just like Jason Moran and Pasquale Barbaro, who were gunned down while watching their sons play Auskick at this park on June 21, 2003.

4. Coburg
Now retracing our steps (a good way to lose a “tail”), we pass by the site of the old Pentridge jail, and along Queen Street, Coburg, where we receive the letter “N” for Nikolai Radev, who ripped off one too many drug dealers and scored several bullets to the head and chest. To keep you from an upset stomach, we pass around trays of yummy little chocolate treats – “bullets”, naturally.

5. North Fitzroy
The Divvy Van hits North Fitzroy, where we collect the letter “M” for Gerardo Manella, shot in October 1999 in case he was about to avenge the death of his brother, gunned down on this very spot ten months earlier. Call it “proactivity.”

6. 7. 8. The City
We circle the city to the stories of Graham “The Munster” Kinniburgh from the “Great Bookie Robbery” and Raymond “Chuckles” Bennett, he of the “Magnetic Drill Gang” robbery, both deceased. In case you’re starting to find a life of crime appealing, we move on to Brian Kane, the second Kane brother killed in four years, and Lewis Moran, the second of three Moran brothers to meet the same fate.

9. Carlton
Feel like lunch? Off to a well-known Pizza restaurant in Carlton with a copy of the papers from March 24, 2004, when Andrew “Benji” Veniamin, suspect in at least four previous killings, was shot in this very restaurant. Enough tomato on your pizza?

10. Docklands
Nice place, the Docklands, isn’t it? Restaurants, nightclubs, lots of apartment space – and the ghosts of many a dockland crim, like Navy deserter and notorious gangster Frederick “The Frog” Harrison, murdered here in 1958 in front of 30 “see no evil” witnesses.

11. Port Melbourne
Over to Bay Street, Port Melbourne to collect the letter “A” for amphetamines, the daily bread of one Victor Peirce, member of the feared Pettinghill crime clan, gunned down here on May 1, 2002 while sitting in his car – a rather common final pastime of Melbourne criminals, it seems.

12. Toorak
Now we head east to the safe suburbs, like Toorak, where people have nice jobs. Our clue is “G” for greengrocer, the erstwhile occupation of Joe Quadara, who died here because of what the taxman might refer to as his “second job.”

13. South Yarra
Afternoon snack time? How about a hot dog along Toorak Road? Hopefully the vendor won’t go the way of Michael Marshall, the kickboxing hot dog man who hit a fatal snag here on October 25, 2003.

14. South Caulfield
Down past the back garden and last resting place of “Mad Charlie” Hegyalji (it rhymes), who once bit off the nose of a teenage rival, but bit off more than he could chew in November 1998.

12. Werribee
Now a sharp fork-turn toward Melbourne’s fast-growing south-western peninsula, where you can enjoy Werribee Zoo, Werribee Mansion, or, if you’re Housam Zayat, a date with a rival and a pump-action shotgun. We collect the final letter “N” for nightclub, the control of which apparently caused the “disagreement.”

13. Chadstone
Last stop for our tour takes us back up around the bay and out to Chadstone, where Willie Thompson was murdered in 2003. You can do a little shopping to end the day – you might need the therapy.

And that’s the end of our tour. Have you been collecting all your detective letters? A prize for the first to guess the anagram. And here’s a final clue – join the dots on our journey map . . . You got it. We’ve just played “Hangman.”

DETAILS: The Gangland Murders of Melbourne Tour
Departing: When you least expect it.
Price: An offer you can’t refuse.
Families? If they get in the way.
Concession? Time off for good behaviour.
For more information: Ask the guy in the blue tracksuit holding the bag.