The history behind Melbourne’s most majestic markets 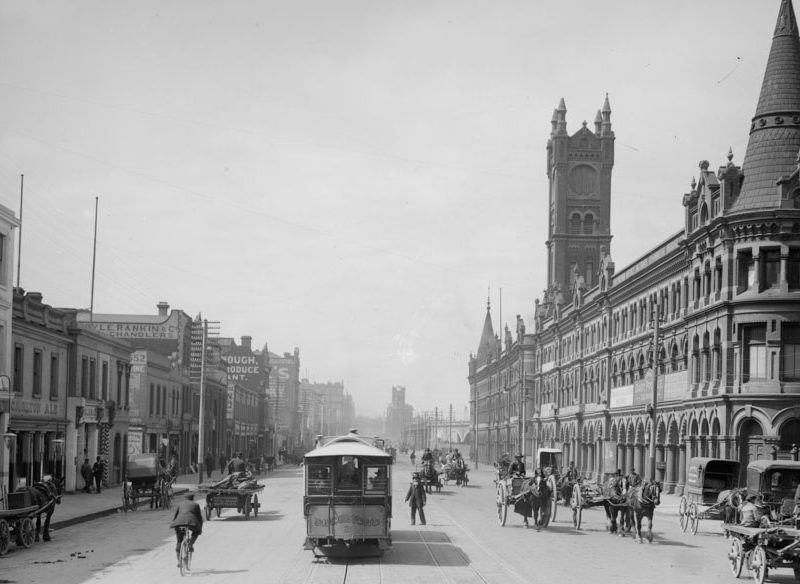 The most fanciful of fish markets once thrived in the city’s CBD. Imogen Eveson discovers its glory days.

Melbourne loves markets. The city’s longest-running contender, South Melbourne Market, is going strong in its 150th year of trading, having first opened in May 1867.

Across town, the Queen Victoria Market is still such a hit that it’s about to undergo a $250 million restoration and renewal project.

Both markets remain vibrant cultural destinations, and in summer see people flocking to enjoy the spoils of their ever-popular night markets (until 23 February and 8 March respectively).

Fine examples of Victorian architecture these markets may be, but they never had a patch on the old Melbourne Fish Market (also known as The Melbourne Corporation Markets).

Once a grand city landmark that held court on the corner of Flinders and Spencer Streets, the building was demolished in 1959 in the name of modernisation.

The inauspicious carpark and flyover that replaced it have now gone too, and in its place today sits an underwhelming office block.

It’s a far cry from the fanciful building that was constructed in 1890 in the Victorian ‘eclectic’ style; a practice that saw many Australian architects, unbound by centuries of tradition, toy with different design elements to create original works.

The Fish Market itself was crowned with a clock tower, turrets and copper spires. And why the hell not? Fish was big business back then, and so the building played a crucial role in city life.

“It was one of [Melbourne’s] major sources of food and this was the place that all the fish came to,” says historian Bruce Bennett, author of The Fish Markets of Melbourne.

He paints a picture of a typical market day – busy and chaotic – and notes the antisocial hours its “rabble of people, trying to get business done” would have kept.

“They started at one or two in the morning and would be finished by about eight.”

It was before the days of refrigeration and so, “the fish would be caught the day before and travel overnight so that it was fresh for the market and retailers the next day,” Bruce says.

As time wore on, the fish trade changed and the market itself became outmoded and increasingly impractical.

Less desirable to urbanites, too, on account of its bad smells. The decision was made to establish a new one on Footscray Road.

The old market was flanked by a precinct of shops that dated from the same era. They had once housed the Adelaide Steamship Company, ship chandlers and several rabbit merchants, and were now showing signs of major structural damage.

Although in fine fettle itself, Melbourne Fish Market – spires and all – was knocked down with its neighbours.

Just one casualty of the post-Second World War wrecking ball, when the grandest of Victorian buildings were considered eyesores, it’s nonetheless hard not to wish it had survived when we see it in photographs.

Smack bang between South Melbourne Market and the Queen Victoria, just imagine the summer night markets we could have had there.

Want to know more about Melbourne? Check out The ultimate weekend city break in Melbourne