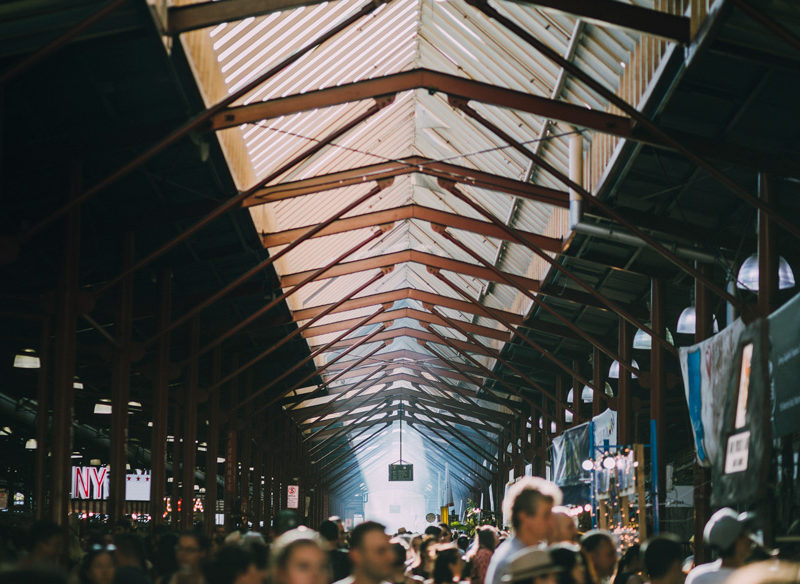 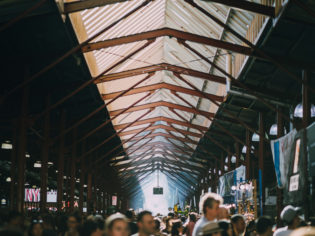 Melbourne’s iconic Queen Victoria Market sprawls over two blocks on the edge of the city, and it’s a testimony to its sumptuous wares that almost a quarter of a million people visit each week. On a sunny Saturday, the footpaths outside bank up with shoppers refuelling with coffee and jam doughnuts.

In winter, the patter of raindrops on the roof and smell of wet asphalt are the market’s distinctive hallmarks. Such a palette of smells, sights and sounds can’t be found in a supermarket and it’s this, together with the market’s rich history, that has earned it a place in the hearts of Melburnians.

There’s also its history. This is the only major 19th-century market in Australia still operating. It opened in 1878 as a place for local market gardeners to sell their produce, because the gutters weren’t considered a hygienic option anymore (previously they had been selling their wares streetside). The soaring architecture and design of the Lower Market (the oldest part) still offers a tangible connection to the past.

Foodie fashions come and go, but the heritage-listed awnings, marble counters and shop facades of the Dairy Hall (established in 1929 and known colloquially as the deli section) transport today’s shoppers back to the ornate glass-and-steel artistry of the Deco age.

The Meat Hall, built in 1884, sells meat and fish and, like the deli section, is protected by the National Trust. Visitors are greeted with a majestic facade of Roman columns, a raised archway and a charming tableau of farm animals above the entrance. Before refrigeration was introduced, meat was carted over from a local cool room in handcarts and fish was delivered from the far side of the city by horse and cart. Stalls didn’t yet have window frontage; nor was meat displayed in small cuts, but rather in large lumps. These days, the meat is more tastefully presented.

The Upper Market is housed under shed-style roofing and is home to general wares, fruit and vegetables, and was once Melbourne’s first official cemetery. That closed in 1854 prior to the allocation of the land to the council for the establishment of a market. The remains of Melbourne’s earliest settlers, including founder John Batman, were reinterred elsewhere; however, next time you’re shopping for belts, shoes or handbags, bear in mind that thousands of bodies are said to remain under the asphalt.

Originally the market included both wholesale and retail operations, but by 1969 the wholesale trade had outgrown its space and was relocated off site. At about the same time, Melbourne City Council, which manages the market, planned to redevelop the site into a 40-storey behemoth, retaining only a token section of the market. But the Council hadn’t counted on the public’s affection for the Vic, and more than 18,000 locals signed a petition opposed to its redevelopment. Then the Builders Labourers Federation weighed in and refused to demolish the site, and the market was saved. In 1982 the Meat Hall was enlarged and these days the market extends its appeal through summer night markets (open from the last Wednesday in November until February), cooking schools, and heritage and foodie tours.

It may appear to the uninitiated that every stall is selling the same thing, but don’t be misled: each stall has its own unique suppliers and specialities. One visit whets your appetite, but the Vic rewards the return visitor. Over time and through talking to stallholders, you’ll work out where to go, and when, to procure the freshest produce at the peak of its season, the most interesting varieties, and the rarest and most sought-after delicacies. The market follows nature’s timetable and the stallholders are a wonderful source of information, recommendations and good cheer – that’s what makes a trip to the Queen Victoria Market a quintessential Melbourne experience.

“It all starts with the buying – if you buy well, you sell good stuff. We sell certified organic and biodynamic fresh produce, and some essential dry goods. We focus on what’s in season and also try to pick up any heritage varieties. We have heaps of regulars – each day of the week there’s a regular set who come in. And you see their kids grow up! Some kids you knew when they were two years old, and now they’re ten. You can’t get that anywhere else.” – Karen Birthisel.

The Land of Soy and Honey

“People come here to buy tofu and honey. We have some extraordinary honeys including some from Kangaroo Island, a bee sanctuary since 1885 and the only place in the world where Ligurian bees exist in their pure, organic state. The island even exports Ligurian bees back to Liguria in Italy! We also stock rare honey from Australian native bees that has the same antibacterial properties as manuka.” – Carolina Mikulik.

“My grandfather Wayne started the shop in 1920 to sell rabbit and my uncle expanded it into game meats in 1990. When the calicivirus hit in the ’90s we had to change, so we changed to fish. We mainly sell fillets from Australia and New Zealand and we try to specialise in different fish – midori, rockling, flathead. Flathead’s our biggest seller.” – Brett Chitty.

“We’ve been here 20 years and we’re renowned for selling the output of small Australian cheesemakers. Eighty per cent of our customers are regulars. The best thing is when they come in and say, ‘Sell me some cheese: I’m putting on a party this weekend – what do you recommend?’ whereas if they went to the supermarket they couldn’t get that advice or that service. That’s why they come to the market.” – Bill Tzimas.

“We sell biodynamic beef, pork and lamb, which means it’s strictly grass-fed. There are no chemicals, pesticides or preservatives so it’s got more flavour – it’s sweeter, there’s no ammonia taste. We deal directly with farmers so we know exactly what we’re getting. Most people who come here are conscious of the wellbeing of the animals: that’s their main priority, as well as their own health.” – Michael Thurley.

AT recommends: Moroccan burgers made of lamb mince, cumin, coriander and sultanas for barbecuing.

“People come here to buy tomatoes. My father started the stall 64 years ago; he’s 84 now and he still works here. So does my mum. We mainly sell tomatoes grown on a small scale in South Australia and Victoria. The water down south is better, the varieties are better, they’re grown with more care, they have more flavour, and they have a higher acid content, which is what people want.” – John Pontelandolfo.

“I’ve been here twelve-and-a-half years. We sell the best range of French cheeses, terrines and pâté in Melbourne, but what do people come here for? Counselling! I think this shop’s a total package for customers; it’s about familiarity. The market can get crazy, but I love it for the quality of its produce and the diversity of people.” – Julie Langtry

“We sell home-made burek, kebab, salads, felafel, rolls and zucchini patties. We’ve been here 15 years and make everything on the premises. Burek is a pastry with filling – cheese and spinach, potato and vegetable, lamb and vegetable with spices. The recipes are my own, based on Turkish recipes. Everything here is Turkish; we are Turkish too. Only women work here – it’s just coincidence! We make everything daily, we don’t keep anything for the next day. It’s always fresh.” – Nancy Turin

“This stall started 36 years ago, selling Herb & Adams cakes and pastries – the original sign is heritage and still above our shop. Now we sell everything. The last four years, it’s amazing what you can get: a lot of local produce, dry goods, muesli, beans, vinegars, condiments, bread, chocolate, dried fruits, grains. Dad comes in Sundays, my brother and my older sister also work here, so it’s a family business.” – Michele Caiafa

“Vic Market’s a fantastic place to be a purveyor of desirable goods. It’s stimulating, like a toyshop for adults. My business model is based on old values: instead of turning every transaction into a sale, we turn it into a social interaction. We don’t pre-slice anything, everything’s done according to the customer’s exact requirements. I’ve tried to source old products from butchers who are retiring, or I look for old Polish, German, Middle and Eastern European recipes and replicate them with a couple of friends.” – Peter Langtry