What to do on a visit to the world's 'Most Liveable Town'; Port Fairy It gets plenty of attention for its festivals and food scene, but the lure of Port Fairy’s rugged outdoors will get you out of your comfort zone, out on the ocean, and finding your sea legs (Leanne Clancey).

The command is clear: “You’re probably gonna want to hang on with both hands for a bit here.” We’re about a kilometre off the coast of Port Fairy in an eight-man boat called Apex I.

Unlike other fishing charter boats it’s not the slow, chugging type – it’s a nimble little fibreglass number with two outboard engines and plenty of acceleration, which we’re about to get seriously acquainted with.

Our captain, Dan Hoey, is a young local fisherman and former abalone boat skipper who is Port Fairy born-and-bred. He’s just spotted a big school of fish about 50 metres away.

“Southern blue fins!” he shouts, over the engine noise. I look. All I can make out is waves, but I know from experience that a seasoned seafarer’s eye sees much more than the average civilian’s, so I take his word for it.

Like his father before him, Dan has been fishing south-west Victoria’s Shipwreck Coast since childhood, and knows this stretch of water like the back of his hand.

“See all those birds dipping in and out of the water over there?”

I’m a little slow off the mark, but a few seconds later I catch up and spot them; a lively group of terns and gannets rising and falling like frenzied yo-yos against the surface of the water, feeding on pilchards. “That’s how you know the tuna’s biting,” explains Dan.

Swiftly dispelling my long-held prejudice that fishing is mind-numbingly slow and uneventful, barely 10 minutes later we’d dropped a line and hauled one in – a feisty 13-kilogram southern bluefin tuna. After starring in a couple of triumphant selfies up on the deck, Mr Fish was soon on the ice and became sashimi dinner for my family only hours later. Talk about fresh.

“Plenty of people still think fishing is about sitting around watching a rod for hours on end and then going home. They’re not always very optimistic,” Dan laughs. But like us, once they do come out, they’re quite literally hooked.

“When you start catching fish it fires people up – they get excited. Then they’re booking in again for another charter.”

Located about 300 kilometres west of Melbourne at the far end of the Great Ocean Road, Port Fairy has long drawn crowds for its award-winning dining, annual folk festival and unique village atmosphere.

But despite the transient annual influx, the place manages to retain its small-town feel and never feels overrun, which, if you listen to die-hard Port Fairy vacationers, is the reward for driving the extra distance from Melbourne. Port Fairy’s The Merrijig Inn dates to the mid-1800s.

According to locals, there’s something about Port Fairy’s maritime history, relative isolation and raw, untouched natural environment that stirs a spirit of adventure and discovery in those who come to visit.

Liz Foreman who, together with her partner Tanya Connellan, owns and runs historic bed and breakfast The Merrijig Inn sees it time and again with the guests who come to stay at ‘The Jig’.

Built in the mid-1800s, The Merrijig is noted as Victoria’s oldest inn and its close proximity to the town’s iconic wharf tends to bring out the inner angler in even the most unlikely candidates.

“The wharf really is such a Port Fairy icon,” Liz explains. “And because it’s so sheltered and beautiful, it really makes you just want to get a fishing rod out – even if it’s not your usual thing.”

Rise early and this is where you’ll spot local fishermen hauling in the day’s catch of crayfish, squid or snapper, while further down the old timber decking is the best spot to dangle a casual line in for mullet and trevally.

More adventurous seafaring types can board a charter fishing boat here (such as Dan’s) and head out into the big blue to try their luck with prized deep-sea fish such as albacore, kingfish and snapper.

Make a break for the surf Port Fairy has some great surf breaks to tackle.

With good, year-round conditions and a handful of excellent breaks to choose from, surfing is justifiably popular with the locals and a big drawcard for visitors.

According to Chris Sharples from Port Fairy Surf School, the town’s distance from Melbourne means that its surf beaches are not as well known as those at the eastern end of the Great Ocean Road. But the upshot is you don’t get the crowds of Bell’s Beach or Port Campbell.

“We find that by the time people do the drive down the Great Ocean Road and arrive here they’re really keen to get in the water and have a go,” he says. “We get pretty decent surf at East Beach all year round,” Chris explains.

“During winter the wind is off-shore so the waves are cleaner, but in summer the water is a lot warmer and the sun’s out so it’s a bit easier to get in.”

While accomplished board-riders might want to try their luck at the tricky reef breaks such as Oigles or The Passage on the south side of town, the safest spot for rookies to get accustomed to board life is in the comparatively sheltered bay at East Beach.

Here, you can join in group lessons or private one-on-one instruction, such as those run by Chris’s surf school, where you’ll be given tuition on the basics while still on terra firma, before graduating to the water to bust out your new moves.

Despite growing up by the ocean, I’m a total novice when it comes to surfing, so the experience of taking a lesson proved to be a thrillingly awkward bundle of fun, fear, persistence, humility and, eventually, exhilaration.

My teacher for the day, Jack – a buff, sun-bleached 23-year-old who had spent the past five years travelling the world teaching nervous strangers how to surf, was the right amount of patient, pushy and upbeat to get me (17 years his senior) out of my comfort zone and sucking up any whingey little rants about cold feet and scary waves.

What I found was that like so many things in life, understanding a basic formula – push up, knees in, step forward, stay low – and repeating it diligently, despite the inevitable wipe-outs and belly flops, is the secret behind learning to surf.

I came to recognise that when you’re hurtling down the face of a wave at speeds you’re really not comfortable with, the fear is real, but despite that you can do amazing things – like holding on, standing up and riding it.

In that moment you’re a fearless warrior, and without even thinking, you’re paddling straight out for the next wave. The sensation is totally addictive. It starts to make sense now why all those surfers I grew up with were so damn cocky and self-assured.

Back at The Merrijig, Liz tells us that when visitors come to town she loves witnessing the sense of freedom and discovery that they feel. “They love how beautiful it is here – the empty beaches, the salt air, the wildness,” she explains.

“So often, after a day out exploring people come back to us with this look of pure wonderment on their faces – like they’ve just uncovered a hidden gem, something really special.”

Port Fairy: Eat, stay and what to do 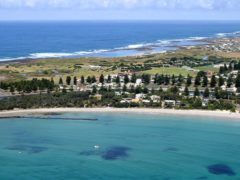 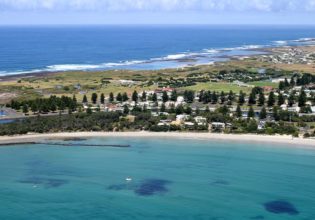 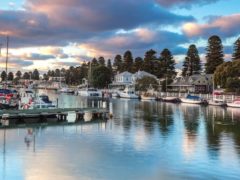 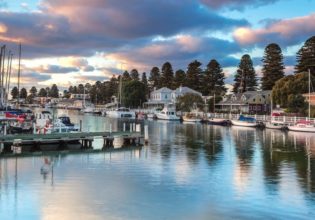 The forgotten seaside district Port Fairy District, Vic Sandwiched between Warrnambool at the tail-end of the Great Ocean Road, and Portland, the ...