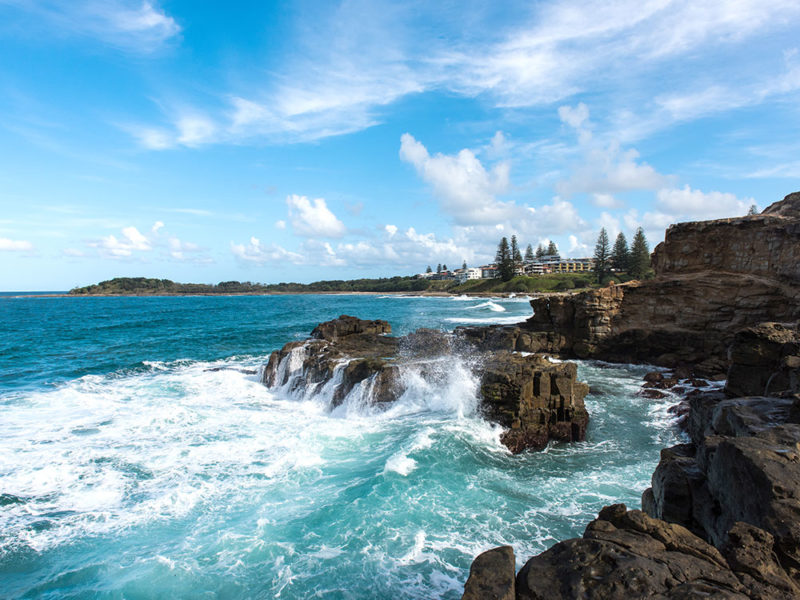 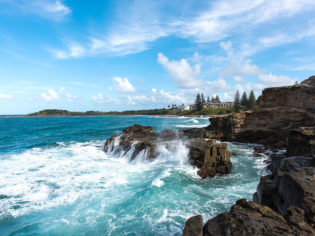 Nowhere on earth does summer like Australia. Here are 11 of the beach towns that do it best.

The anticipation of summer holidays in Australia always induces a sense of nostalgia on steroids.

Long days at the beach evolve into sunburnt evenings, dinners by the sea are inevitably spent fending off seagulls from swooping in on your paper wrapped fish ‘n’ chips, sand trails after you from the beach to the car and the house; it’s all part and parcel of the annual summer trip.

And if all this talk of summer has you longing for a new backdrop to watch the days roll into each other, we’ve got 11 of the best summer beach towns around the country for you to escape to.

Never heard of Marcoola? We’re not surprised. The little Sunshine Coast town continues to fly under the radar, preferring to allow its neighbours, Noosa and Maroochydore, to steal the limelight – and that’s why we love it here. Find uncrowded beaches, the Maroochy River at its back door, and plenty of grassy parklands that offer the perfect spot for a family barbecue. Doing very little is the most delightful thing to do in Marcoola. And when you want to get the heart pumping, walk to the summit of Mt Coolum for a panoramic view of the coast and hinterland. 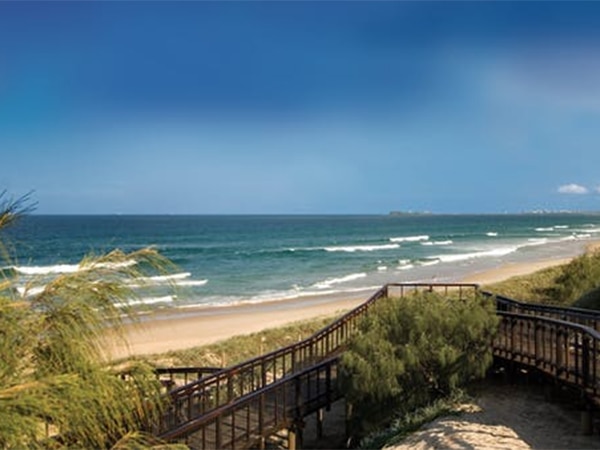 Hidden away in the heart of the Royal National Park is the tiny coastal village of Bundeena. It is a ferry ride and a world away from the bustling suburbs of Sydney, with its secluded beaches, uncrowded bush trails and tight-knit community. Affordability isn’t the concern here – availability is. There are no hotels; you have to fight the locals for use of their holiday homes. Most are occupied by owners over Christmas, but free up early January. An example is Bundeena Treehouse – a one-bedroom, one-bathroom skyward retreat.

Jibbon Beach is good for swimming but accessible only by bush track or kayak. There are significant Aboriginal rock carvings at one end of the beach, carved by the traditional Dharawal owners. Rent a kayak at Bonnie Vale picnic area and paddle around the Port Hacking River, follow it up with fish and chips for lunch, or try to time your visit with the monthly Bundeena Saltwater Market. 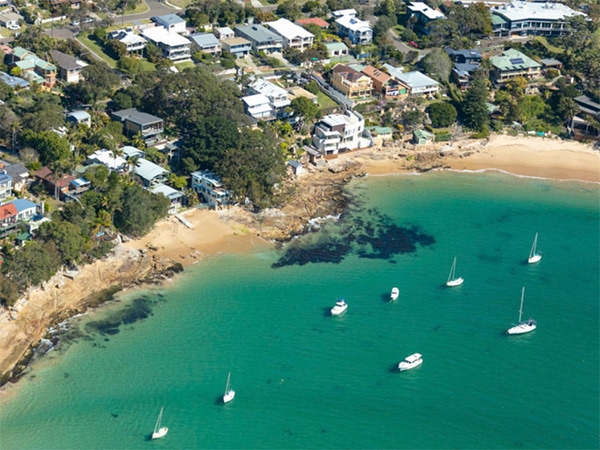 The tiny coastal village of Bundeena.

Just across the pond from the southern tip of K’gari (Fraser Island) and an hour-and-a-half drive north of Noosa, Rainbow Beach gives you a small taste of K’gari-style adventure, but without the accessibility issues (and expense).

The gentle surf at the beach will keep you (and the kids) occupied for hours. Take to a boogie board to ride them, or hop on a horse to admire them from the shore. Fishing is popular in the area, as is hiking in and around Cooloola National Park.

Food options include the Surf Life Saving Club and Sport & Rec Club, which serve bistro-style meals. The Plantation Hotel offers something a little more upmarket, or just drop in for a cheeky sunset G&T with great views over the beach. 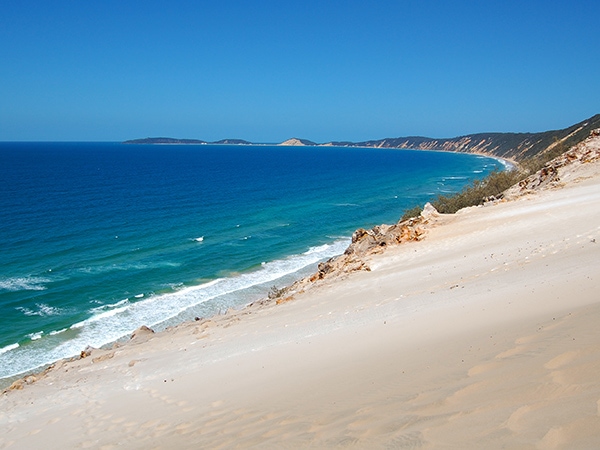 A stretch of sand at Rainbow Beach.

Galaru (colonised as East Woody Beach) is a pristine, popular coastal area that requires a permit from the Dhimurru Aboriginal Corporation to visit. The stunning wilderness is bound together by pockets of rich Yolngu culture. It’s well worth the journey, if only to see thriving indigenous communities in action. 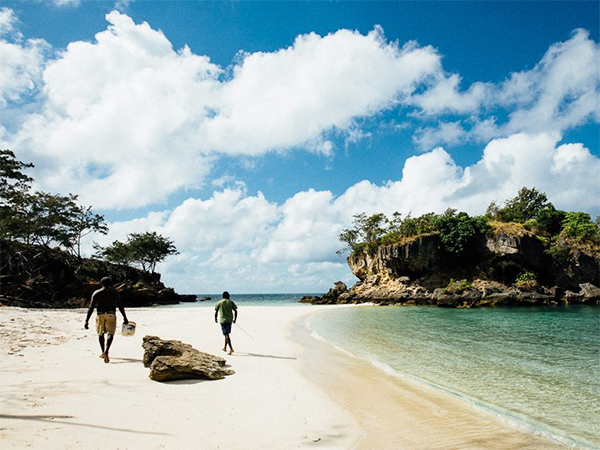 This jewel of the Great Ocean Road was voted the most liveable town in the world in 2012. In the years since, Port Fairy has dialled the beach nostalgia up a notch, boasting a handsome seaside setting and heritage streetscape, complemented by a dining scene that’s growing in reputation (seek out Conlan’s Wine Store for hearty and sophisticated fare matched with regional wines, or Coffin Sally for pizza and cocktails), and its year-round calendar of festivals of every persuasion.

The Port Fairy Folk Festival (Folkie to locals) sets the streets abuzz in March. During the summer months, walk across the Moyne River causeway to Griffiths Island to see muttonbird rookeries, go horse riding in the hinterland or visit the dormant volcano and Crater Lake at Mt Eccles in Macarthur. 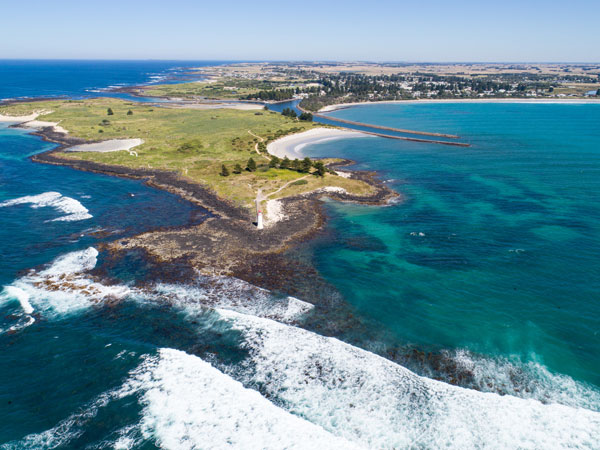 Find the pretty fishing village of Port Fairy at the end of the Great Ocean Road in Victoria.

Calling Second Valley sleepy is actually a compliment: it is so unaffected and basic in its accommodation offering – the caravan park is your best bet – it leaves you with nothing better to do than simply take in the breathtaking beauty of your surroundings.

Follow the open valley that narrows at the coast to a gap, through which flows the small Parananacooka Creek. The neighbouring road to the beach showcases panoramic beauty. And to the west, a north facing curving boulder beach is attached by rock reefs to a small headland. 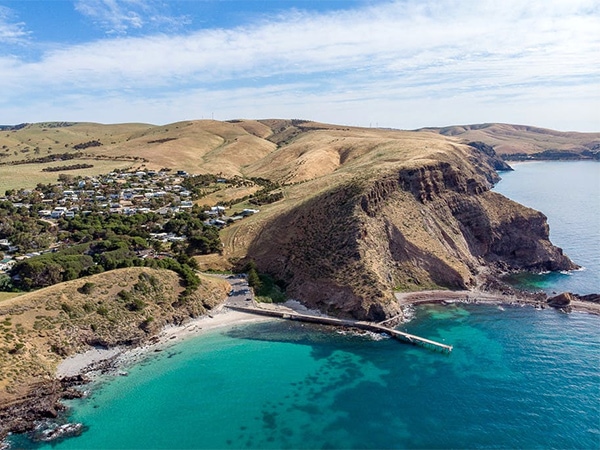 Second Valley lets you take in the breathtaking beauty of your surroundings.

“With Byron Bay becoming increasingly overcrowded and overpriced, many have started to declare Yamba, 120 kilometres to the south, ‘the new Byron’.” It’s a phrase we wrote back in 2019, and yet, even with all the hype, Yamba manages to maintain its unpretentious essence and strong sense of community.

Located 682 kilometres north of Sydney, and 300 kilometres south of Brisbane, summer days in this sleepy town are spent exploring its famed beaches; all within an easy walk of each other. A little further afield is Angourie, renowned for having some of the best surf breaks in the nation.

The town goes to sleep early, with a lack of the night-time pizzazz you may find in the lauded Byron’s and Noosa’s. But that’s just part of the appeal. Even under pressure from its burgeoning popularity, Yamba refuses to move at any pace but its own.

Don’t miss: A photo essay of an iconic summer in Yamba

A vibrant little town in WA’s far south, Denmark is characterised by beautiful seascapes and a tight-knit community passionate about producing top-quality food and award-winning wines. It was also voted one of the friendliest towns in Australia in early 2021.

Aside from the chatty locals, the beaches in Denmark are a major drawcard – try Lights Beach for waves or the placid Greens Pool waterhole for snorkelling. After a day of swimming, grab a homemade pie from Denmark Bakery before tackling the scenic section of the Bibbulmun Track towards Walpole. Walk the whole way there and on to the Valley of the Giants, its Treetop Walk through the canopy of 400-year-old trees is mesmerising. 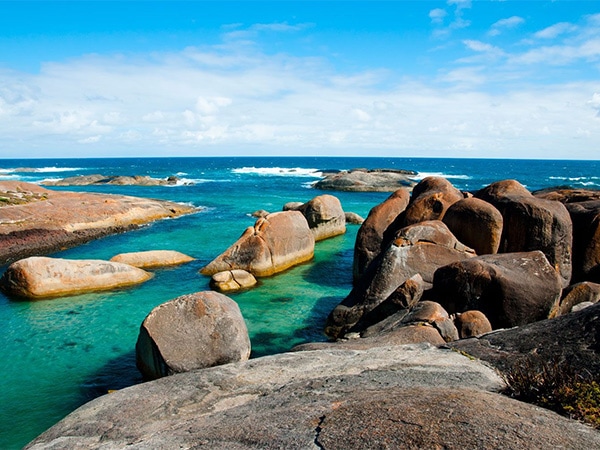 Cool off in Denmark.

When idyllic beaches meet exceptional wineries, you know you’re in for a treat. In the celebrated Margaret River region, Yallingup has transformed over the last decade. It now holds the title of Australian Traveller’s number one town in Australia – and it just so happens that summer is prime visiting time.

Yallingup has been luring in-the-know surfers for decades, while the crystal-clear lagoon at Yallingup Beach does more than satisfy swimmers and snorkelers. Like its neighbour Margaret River, gastronomes also love Yallingup. All manner of palates are catered for, with Chow’s Table, Little Fish and The Studio among the delicious options. For wineries, try Wills Domain and Swings & Roundabouts. 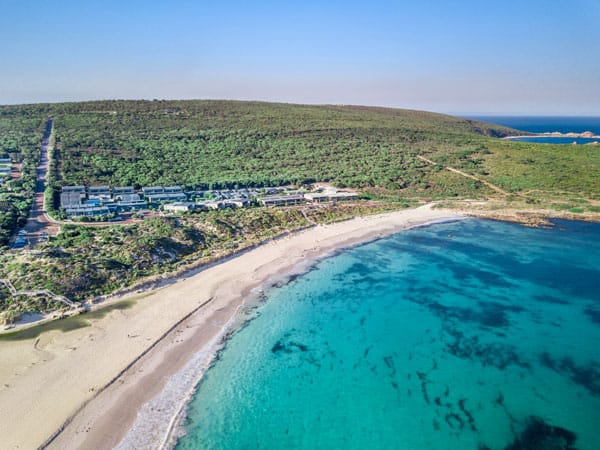 Point Lonsdale (Lonny to locals) is the Bellarine’s coastal jewel. This little hamlet on the tip of the peninsula rewards those who are in-the-know, offering plenty of great little cafes and boutiques to explore. Aside from lying on a towel all day, there are plenty of ways to fill your itinerary. Stretch your legs with a walk up to the historic lighthouse, take a dip in the sheltered beach or play nine holes at the local golf course.

It isn’t hard to find a stellar stretch of sand in Tassie, but our favourite can be found in Stanley – the gem in the underrated northwestern coast. A simple fishing village where the local staple is crayfish washed down with crab. The town was settled in 1826 by employees of the Van Diemen’s Land Company, and is chock full of heritage buildings and cutesy cottages that you’d half expect to still find them residing in.

In summer the Stanley Harbour becomes overwhelmed (and with a permanent population of 458, that’s not hard to do) by smart Melbourne yachties who cross the straight to enjoy the simple life of crayfish, crab and sunshine for as long as the sun will allow. No bustling tourism attractions, restaurants or pubs. Life is pleasingly uncomplicated in Stanley. 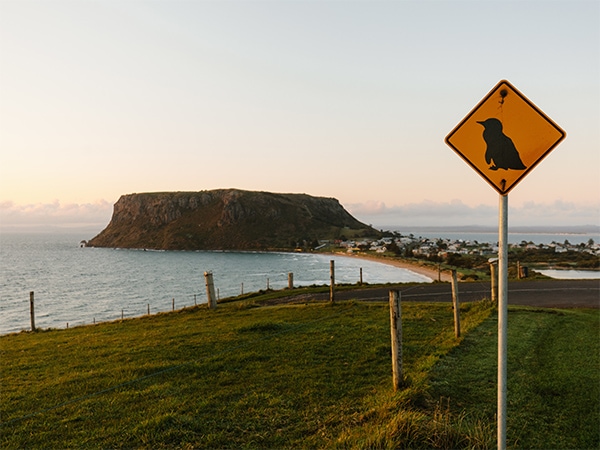 The shadow of the Nut in Stanley. 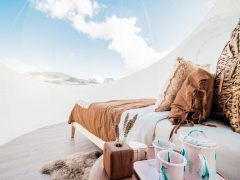 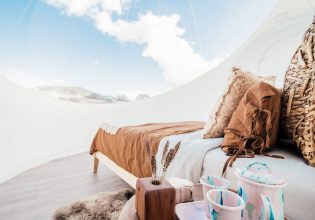 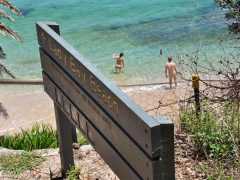 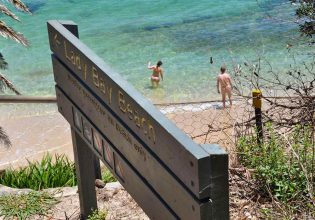 Work on getting an all-over tan at the following places deemed the best spots for skinny dipping in Australia. Skinny dipping is not just for committ... 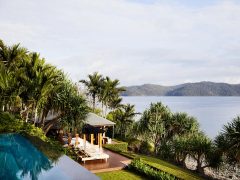 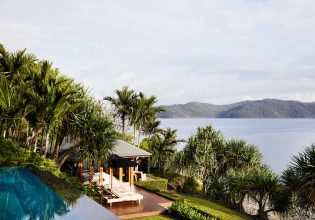 Find all 100 unique stays around Australia

Discover Australia's 100 most unique stays. Whether your perfect holiday looks glamping in the outback or staying at a chic hotel in the city, this l... 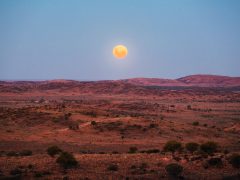 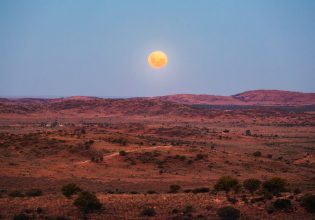 From station stays dealing in wide-open spaces and hearty hospitality to luxury lodges, iconic hotels and underground motels, opt for an oasis in the ... 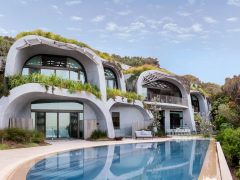 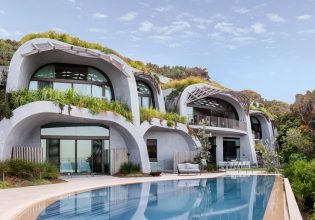 From holiday homes with serious wow factor to award-winning architecture and rooms with a view, take design notes from these covetable crash pads. He... 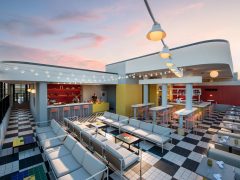 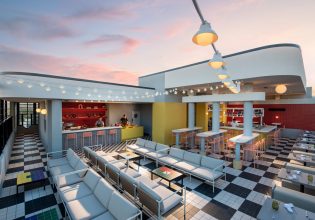 From quirky to quintessential and from local to luxe, these urban escapes are guaranteed to get you under the skin of the city you’re in. Here are ...