If you’re looking to lift your spirits, and your heart rate, here are 10 of Canberra’s best walks, the most wondrous wanderings for a bespoke weekend in the exhilarating ACT outdoors, writes Steve Madgwick.

Canberra is “basically just one big national park,” says local photographer Damian Breach. Despite the ultra-cool tide of urbanity seeping through the city, for walkers and mountain bikers such as Damian, Canberra is still the Bush Capital. In a few minutes you can leave the city behind to be a million miles away on a soundless bush trail, on one of the alluring hills that frame Canberra.

The choice for wanderers, day-hikers and mountain bikers is perplexingly wide, but no fear, you will find what you’re after in at least one of these 10 tantalising trails.

The all-of-Canberra walk: The Centenary Trail 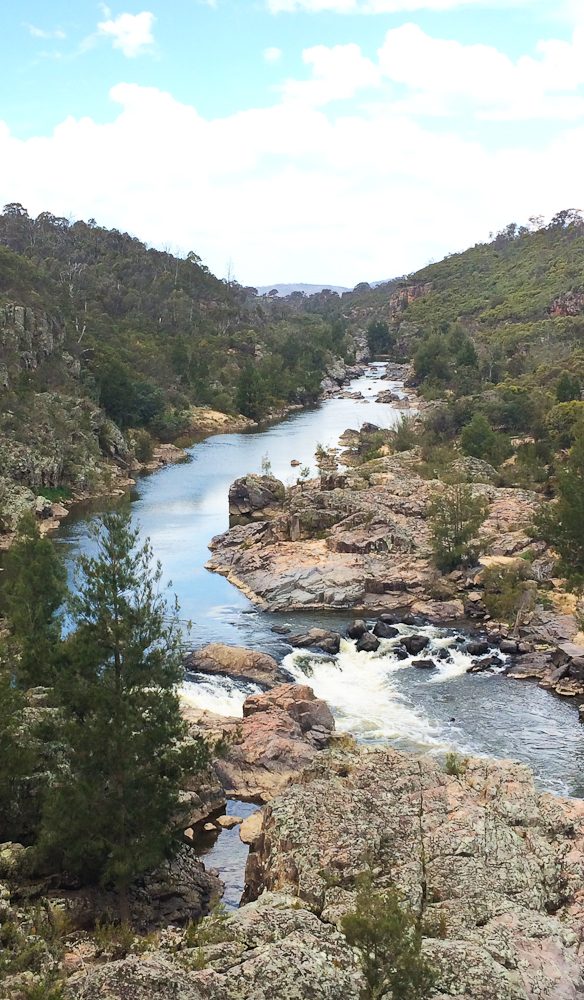 The Centenary Trail is an all-of-Canberra loop that sweeps near the NSW border to the north and dips its toes into the Murrumbidgee to the south. It threads into several urban highlights, such as Parliament House, then just as quickly retreats into secluded picnic nooks and relative wilderness. The challenge? Well, the trail is 145 kilometres long with no sections that loop around, so it’s a point-to-point proposition.

“Because the trail ducks in and out of the suburbs and city, you can always pick up a drink or a snack – or stay the night somewhere,” suggests Damian, who rode the entire loop in 10 hours, including “stopping off for a beer and a burger”. For mere mortals, though, it’s best to try one or two sections at a time, including these three highlights:

At the Centenary’s southern end, the well-signposted Discovery Trail meanders through rolling fields and bushland, the deliciously flowing track a boon for walkers and mountain bikers of most levels. The section kicks off at mountain bike Mecca Stromlo Forest Park.

This track runs for 27 kilometres all up, from Point Hut Crossing to Casuarina Sands, but our favourite section passes by the vivid cliffs of Red Rock Gorge Lookout. The churning rapids of the Murrumbidgee River below are your added pay-off for the 4.4-kilometre return journey, starting – or ending – near legendary local swimming hole Kambah Pools, where you can cool down and chill out on the ‘beach’.

WHERE: End of Kambah Pool Road, near Gleneagles.

Northern sections of the Centenary Trail can feel noticeably more remote, but find the right spot and all-encompassing city views unfold. One Tree Hill Lookout (90 minutes’ return walk) presents Brindabella mountain range vistas, reminiscent of what Canberra’s earliest inhabitants would have experienced, and the incline is mostly gentle on the way up.

WHERE: Take the trail from the corner of Hall and Hoskins streets, Hall.

The trail passes by the nascent 250-hectare National Arboretum, where a handful of intentionally meandering paths spread out over the slopes and soon-to-be forests. The 1.1-kilometre Himalayan Cedars Walk is a relaxing stroll of note – you’ll feel like you’re in a land far, far away. 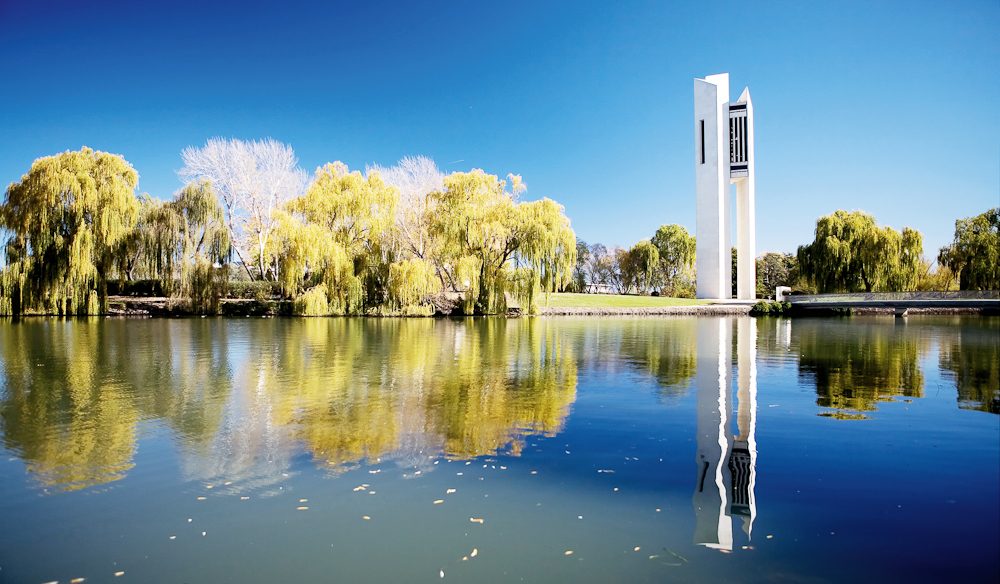 Walking around the Central Basin of Lake Burley Griffin lends a maritime air.

Lake Burley Griffin: it’s an integral part of the landscape and a tranquil place to get away from it all, without getting away from it all. Choose the well-trodden path, or get off the beaten track through the wetlands:

It’s flat, almost impossible to get lost on, and ventures through serene public spaces, always with the mirror of the lake to reflect upon. Power through the five-kilometre walk in an hour, or pause at countless charms along the way, such as the many and various attractions, historical cottages, or just tick off the Australians of the Year Walk.

Take a side-trip at Reconciliation Place along pathways leading to the National Gallery of Australia et al. Linger longer here for a caffeine replenishment.

WHERE: Start from the National Capital Exhibition. Trail loops from Commonwealth Bridge to Kings Avenue Bridge.

Cloistered away on Lake Burley Griffin’s eastern shore, the wetlands is a secluded slice of nature only 10 minutes’ drive from where the politicians hang out. Five timber bird hides help you get intimate with Kellys Swamp’s 200-plus bird species. Wander along the boardwalk, with popping frogs as your soundtrack, on the look-out for eastern long-necked tortoises, while Black Angus cows graze incongruently nearby.

Moving mountains in the capital 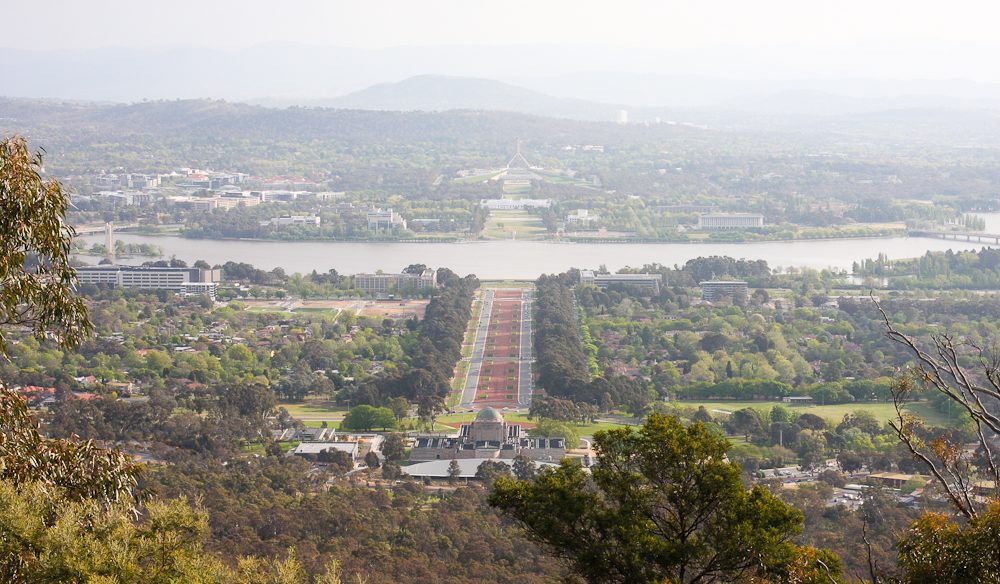 Wildlife nestling into old-growth forest – not just nearby the city, but actually within it. We kid you not. Here are three ways to get close to the nature that’s close to you:

A rosy-cheek-producing walk (4.5 kilometres return), that rises up directly behind the Australian War Memorial. The steepish path winds up through a shrubby woodland of scribbly gums, charmed by intense birdsong and ever-present rosellas, before opening up to a 270-degree view over the Parliamentary Triangle.

You’ll probably stumble across hares, roos, lizards and maybe even a local politician, too. Don’t forget to stop and look around on the way for candid views, plaques commemorating the Kokoda Track and a (sidetrack) memorial to Aboriginal soldiers.

WHERE: Start in Remembrance Park, behind the Australian War Memorial in Campbell. You can drive to the lookout but, seriously, why would you?

West from Mt Ainslie, across the urban corridor, is her twin sister, Black Mountain, whose nature reserve is filigreed with excellently thought-through and maintained trails. Surrounded by other reserves, the bush here exudes a rainforest ambience, making it sublime for wildflower and orchid spotting. The Forest Track (one-hour loop) is blanketed in moss, ferns and lichens, with plenty of mammals and reptiles coming to the party, if you’re stealthy enough.

WHERE: Off Black Mountain Summit Road and Rani Road, Acton. Head towards Telstra Tower (on the summit).

For a manicured change of pace, the Australian National Botanic Gardens, directly to the east of Black Mountain, has plenty of passageways to explore throughout the 35-hectare ‘living collection’ (containing a third of Australia’s plant species).

WHERE: At the foot of Black Mountain, Clunies Ross Street, Acton. 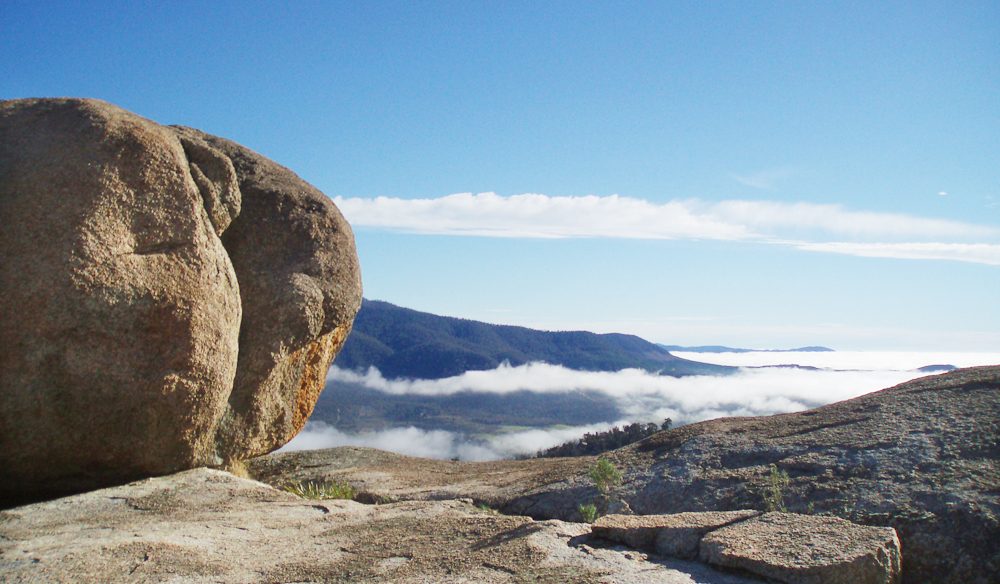 Gibraltar Peak in Tidbinbilla Nature Reserve is a local favourite.

The weekend adventurer’s fundamental questions: how much time and energy do I have to burn? If your answer runs to slightly more generous amounts, envelope yourself in some national park adventure at one of these two outstanding daytrip options, a little further out from the CBD:

Forty kilometres west of the city, the wetlands, grasslands and woodlands of sub-alpine Tidbinbilla Nature Reserve beckon. The pick of the 20 or so marked, verdant valley walks is the moderate-to-hard trek (three to four hours) up to the glorious, house-sized boulders of Gibraltar Peak. Expect to see glades interrupted by spiky grass trees, barely babbling creeks, plus impressively expansive views, once you reach the somewhat phallic boulders at the summit.

Tidbinbilla is well known for excellent opportunities to view wildlife in situ, such as mobs of curious kangaroos,
emus and the endangered southern brush-tailed rock wallaby, throughout the reserve’s 14 protected habitats.

WHERE: The 8.2-kilometre return walk starts at Tidbinbilla Visitors Centre or Dalsetta. Mountain biking is allowed on formed trails.

Just south of Tidbinbilla, the 106,000-hectare Namadgi National Park, which borders Kosciuszko, is a trekker’s dream daytrip. Taking up almost half the ACT’s land area, it offers a selection of short and long hikes (up to seven-hour treks) through alpine meadows and snow gum forest.

WHERE: Yankee Hat trail walk is 65 kilometres south of Canberra, via the Namadgi Visitors Centre in Tharwa.

More: When the walk is over… What else to do in Canberra 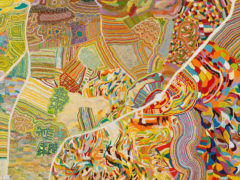 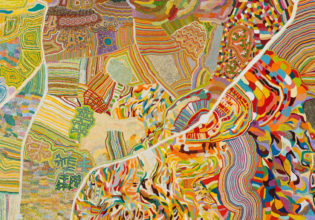