The Deep South Australia coastal walk to a hidden waterfall 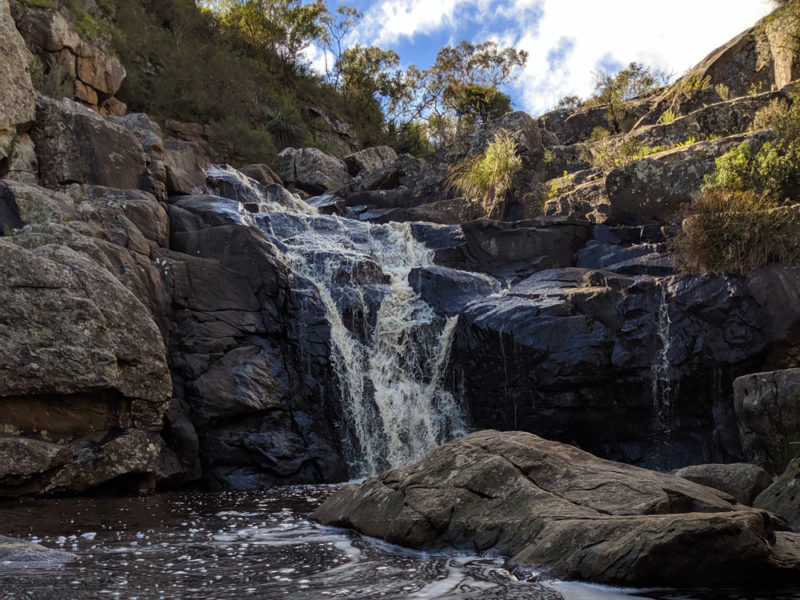 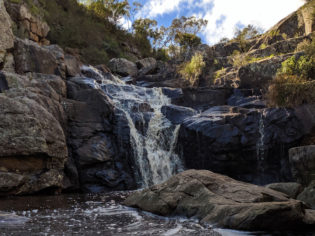 Just 100 kilometres from Adelaide, a relatively unknown guided walk reveals the magic and mystery of the southern Fleurieu Peninsula.

I’ve never known Australia’s most iconic marsupials to be camera shy. Usually they can be relied upon to glance up disinterestedly between mouthfuls of grass or take a few bounds away before peering warily over their shoulders. But the mob of western greys at Tapanappa Ridge is stubbornly refusing to look in my direction. 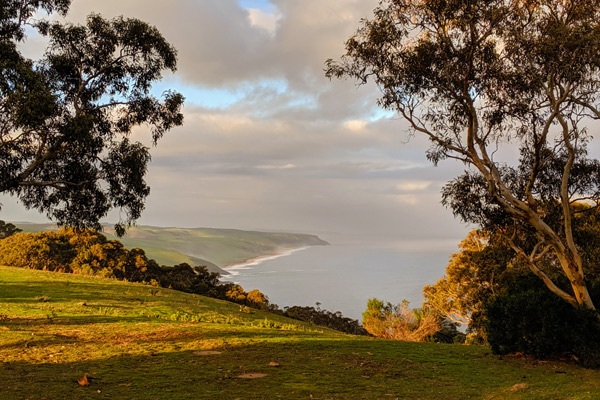 Still, it’s hard to blame them when I check out the alternative. A wall of cliffs stretches up the coast like gap-toothed baleen broken by glittering green slopes sliding straight into the ocean. Tiny hidden coves and broad beaches alike are pounded by waves that have travelled all the way from Antarctica. In the other direction, the outline of Kangaroo Island is discernable beyond undulating hills of open woodland thick with wildflowers. And despite the sense of isolation, this rugged stretch of coastline south of Adelaide is surprisingly accessible.

“It never ceases to amaze me how many people in South Australia have never been to Deep Creek,” Barry Duyker says. “It’s simply incomprehensible”. After four days in his company, I’m inclined to agree. The Conservation Park sits at the very tip of the Fleurieu Peninsula, where the Mount Lofty Ranges that form the peninsula’s backbone meet the western edge of the Murray Mallee. The combination of these intersecting ecosystems and the area’s hyperkinetic topography means the region harbours an astonishing variety of landscapes, from wild ocean beaches and estuaries to shifting dunes, lofty clifftops, open woodland and thick sclerophyll forest. 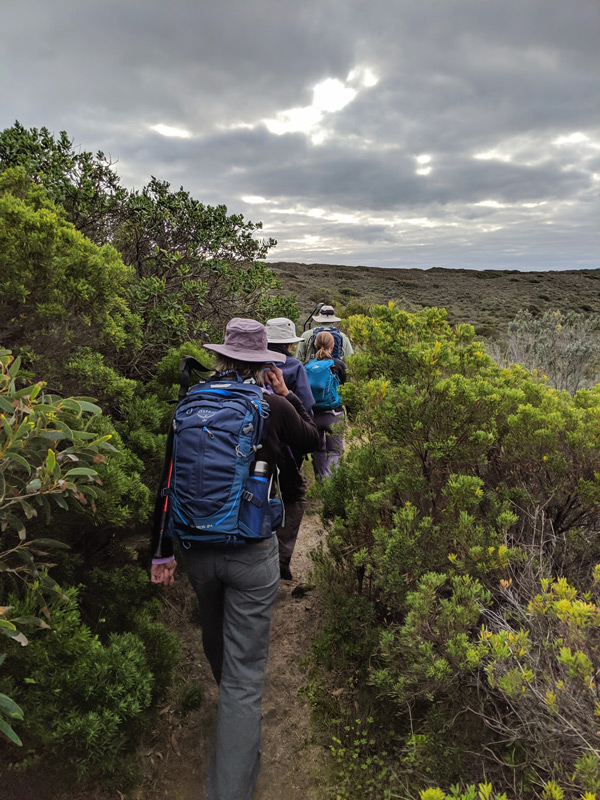 Barry and his wife Jane have spent 25 years providing accommodation for visitors who want to see the region without camping, and in 2018 they launched a guided walk using one of their homesteads as a base. Each section of the pack-free four-day walk covers 12 –14 kilometres, meaning that it’s approachable for anyone with a decent level of fitness. And because of its proximity to Adelaide, it’s easy to completely immerse oneself in this stunning and ever-changing landscape without having to take more than a couple of days off. Barry will even pick you up from the city if you don’t have time for a lazy drive through McLaren Vale.

The trail starts at Cape Jervis, which overlooks the Backstairs Passage between the mainland and Kangaroo Island. Visible across the steely blue water, its towering sea cliffs and undulating pastures will be a constant companion for the walk’s first few days. In the foreground, orange lichen-covered granite and farmland that’s lush despite a dry winter compete for attention with a small sign announcing the start of the Heysen Trail. 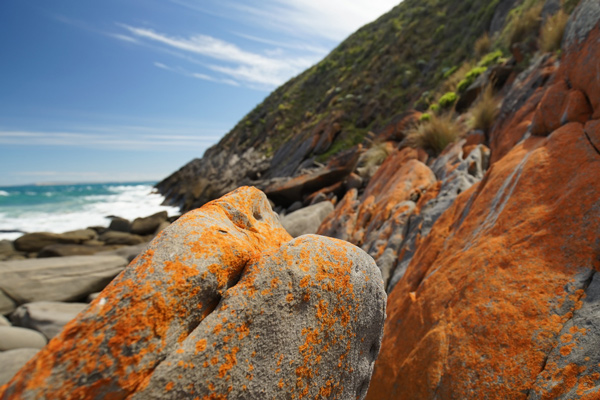 It’s a rather humble beginning for the longest dedicated walking track in the country. The trail stretches 1200 kilometres to the Flinders Ranges in the state’s arid north, but the Southern Ocean Walk covers just a fraction of that distance. Over four days, we’ll travel as far as the holiday town of Victor Harbor but it soon becomes clear that this is not a simple stroll.

The Fleurieu looks like a placid land of gently rolling hills from a distance, but up close those hills can be surprisingly steep. The undulations mean there’s no shortage of climbing on the walk and soon we’ve all worked up a sweat. Still, Barry says with a smile, “that’s what makes the landscape interesting.” 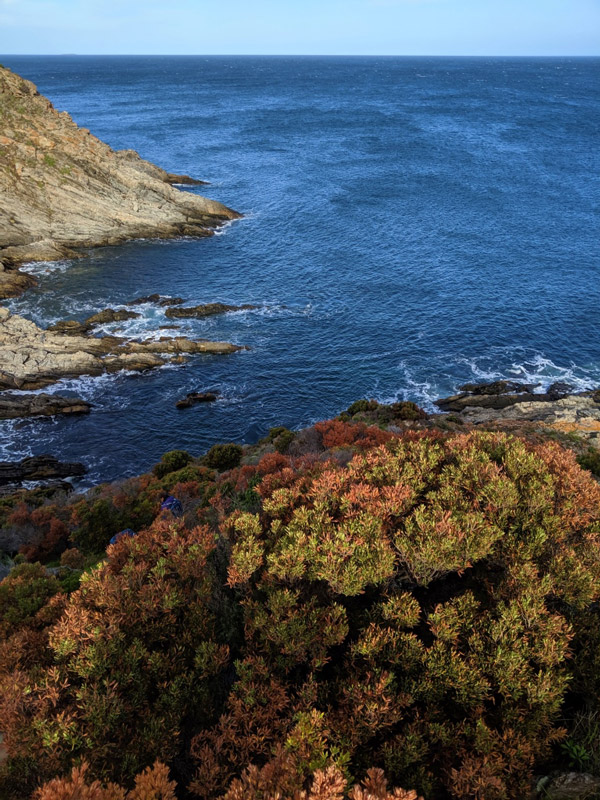 The trail begins in private farmland, occasionally tracking inland to avoid the steepest ravines, but further on there’s reason to be grateful for the hills. The topography of the land, which was too rugged and steep for bullock carts, is what saved the remnant vegetation at Deep Creek. The demand for dairy farms and summer homes means that 90 per cent of the Fleurieu’s native vegetation has been cleared. It makes both Deep Creek and nearby Newland Head Conservation Park vitally important pockets of remnant bushland, and both protect many endangered species.

The cliffs overlooking the Southern Ocean don’t just provide spectacular views; they’re also home to the ospreys that wheel overhead. Newland Head is also home to white-bellied sea eagles that were until recently the only breeding pair on South Australia’s mainland, and the track was re-routed in 2006 to protect them.

In Deep Creek, the trail meanders past cascades and crossings where the sound of trickling water mingles with birdsong and surprisingly melodic frogs that serenade us from the water’s surface. Pockets of deliciously cool air travel above the creeks, but the most refreshing spot is Deep Creek Waterfall. There, tannin-stained waters cascade over rocks to an appropriately deep pool that remains chilly even in the middle of summer. 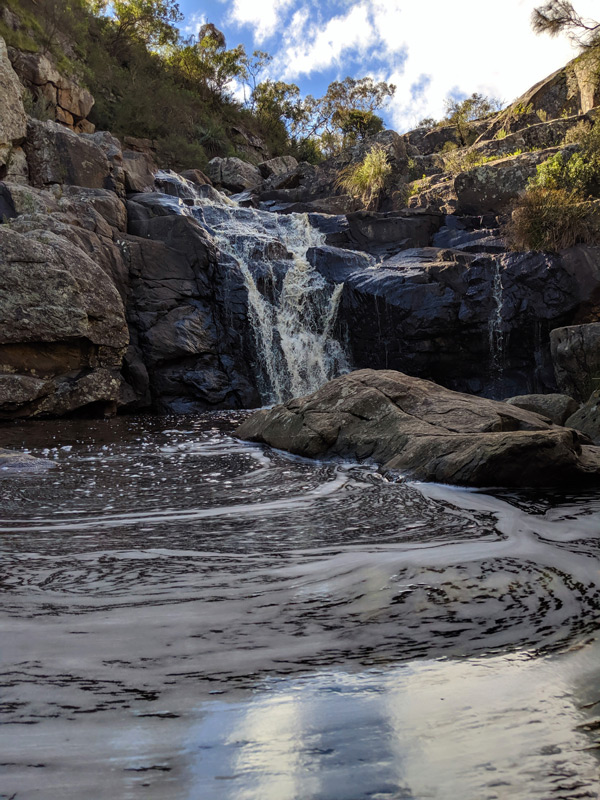 The trail follows the contours of the land, winding past coastal overlooks and offering views of the slopes opposite where daubs of brilliant yellow wattle are splashed between clumps of pink gums that resemble florets of broccoli from a distance. Closer at hand, glimpses of purple, yellow and white by the path turn out to be delicate native orchids with intricate patterns of spikes, spots and beards. And everywhere, from fire-scarred valleys to dense bushland, an unmanageable profusion of shaggy xantheria plants springs forth, their spiky crowns of grass-like leaves making them look like something from a Dr. Seuss book. 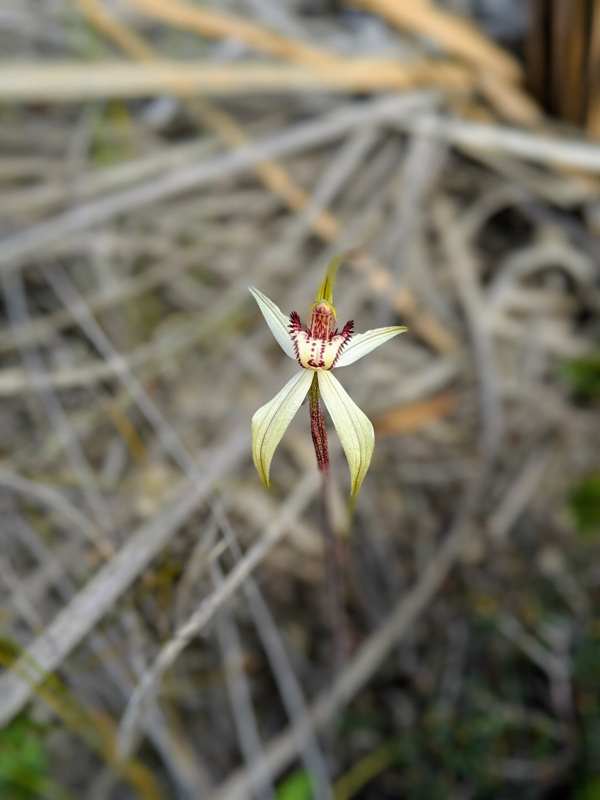 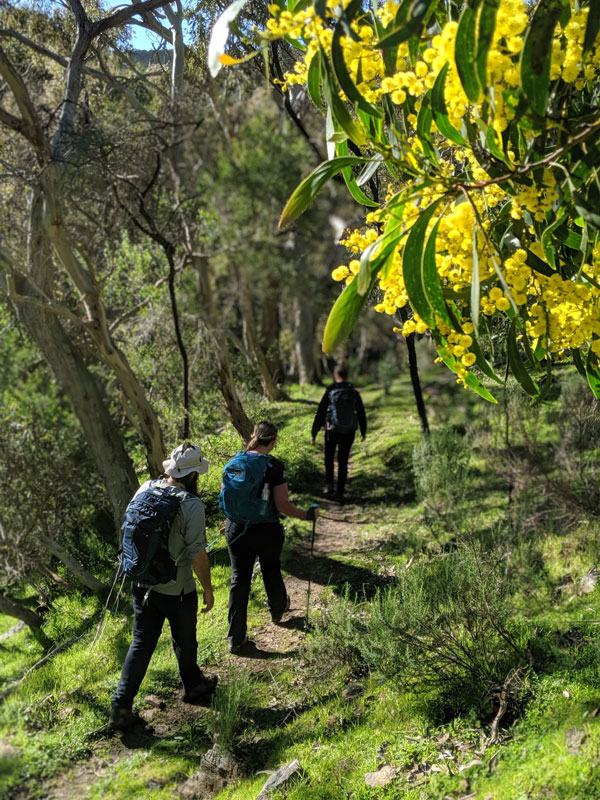 There is an abundance of native flora and fauna along the 4-day hike. Photo: Southern Ocean Walk Barry Duykers.

Because nights are spent at a homestead within Deep Creek, there’s no need to search for a flat spot to pitch a tent at the end of each day. And if the lure of a warm shower and fresh clothes isn’t enough, we’re greeted by little touches like a warm foot bath with lavender and Epsom salts (made even more relaxing by the local sparkling that accompanies them). The meals showcase food and wine drawn from the surrounding region, right down to mid-hike morning tea from the Willunga Farmers’ Market down the road, and the three-course dinners are enough to sate even the heartiest of appetites.

But the location is isolated enough that it’s easy to forget about the rest of the world. If you want network coverage, you’ll need to walk to the top of the nearest hill, and Barry describes the homestead as comfortable rather than luxurious. Still, I feel pretty snug sitting next to the combustion heater in the morning and watching the abundant roos pad over the frost-covered lawns. In fact, I think one of them just looked at me with a hint of jealousy.