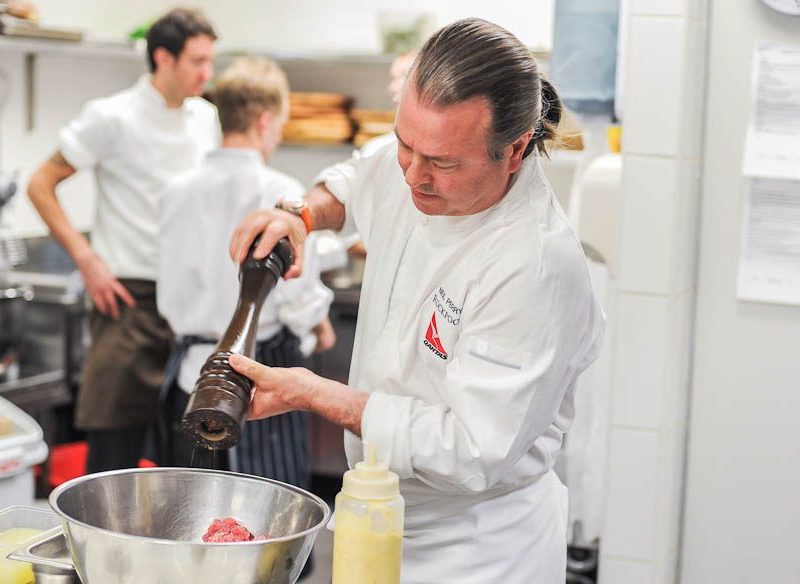 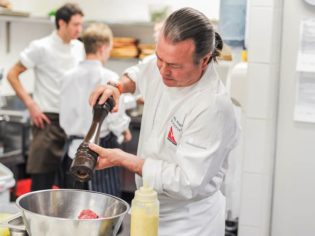 Georgia Rickard catches up with Neil Perry at Emirates Wolgan Valley Resort & Spa to talk Qantas, luxury and the key to success

What does summer mean to you?

It absolutely means fruit. When you have mangoes, peaches, nectarines, cherries, apricots… For me, at Christmas lunch, that big bowl of fruit is just as important as anything!

Where do you think is the best place in Australia for a summer holiday?

Hmm, generally I think it’s actually a bit too crazy up north. Places like Mornington Peninsula are really beautiful for summer… I’ve also been down to Margaret River and that’s really beautiful too, and about seven or eight degrees cooler than Perth. I also used to love fishing on the NSW South Coast at Ulladulla. But, I’d say Hayman Island is the best place – it’s a beautiful island.

Mum and Dad used to live in Port Macquarie and we used to go running and swimming, not at the main beach but the next one down; that was really beautiful. And Airlie Beach is just a really extraordinary place.

Your life seems like one awesome journey, but I also imagine there have been some down times.

Absolutely. In 2000, just before the Olympics, my business partner and I had lost a shit-load of money because our Darling Harbour restaurant was going really badly – we were about two million dollars in debt. So we hatched a plan to shut down and get ourselves out of the restaurants that weren’t working, and focus on what was. It required a lot of personal financial sacrifices for three years.

Things are going well now – what would you say is the key to a successful restaurant?

Making customers happy, it’s as simple as that. In a restaurant like mine, details are really important – not just with the food, but the whole experience. The work flow, where the tables sit, the acoustics, the lighting, how it all adds to the ambience…

How long have you been working with Qantas for now?

So you travel exclusively with them?

I travel 100 per cent exclusively with them, except if I’m doing a sponsored trip. I’m fiercely loyal to Qantas for one reason; I’m proud to be Australian. I was born in 1957, so for a long time Qantas was the iconic Australian airline; the government airline; the flagship. You see that red tail and wherever you are in the world, you feel like you’re coming home. I hate getting on another aeroplane. Whenever I do, I find myself being incredibly critical – because I think our food is the best in the world.

When you designed the Qantas in-flight menu, did they give you specifications?

Is there a dish you always order?

The steak sandwich. We can’t take it off the menu; it’s a signature, and it’s that whole thing of blokes and comfort food. I’ll get on board, do a bit of work then put on a movie, and the steak sandwich arrives with a couple glasses of red wine and it’s just perfect. We sell out of those every flight.

Which of your restaurants is your favourite?

That is a really hard question, and I’m not dodging it, but I wouldn’t open any of my restaurants if I didn’t really believe in them. I guess it comes down to if I feel like eating Italian food at Rosetta, Chinese food at Spice Temple, a piece of steak or fish at Rockpool Bar & Grill, or an amazing 14-course meal at Rockpool.

You’re definitely dodging it! Let’s say the president of the United States is coming to Australia – where are you going to take him?

I’d ask him what kind of food he likes first [laughs]. That’s the hardest question to ask me, it’s like asking who my favourite child is.

What about your favourite Australian restaurant then – one that isn’t yours?

For fine dining, I really like Guillaume at Bennelong and Quay, or for something more modern, Sepia. My favourite Chinese restaurant in Australia would have to be the Flower Drum. I love it so much – some of the dishes there are just absolutely the best in the world. And then if I was just casually hanging out, I like to have a bowl of noodles at Ramen Zundo or take the kids to Sydney Madang for Korean barbecue.

My Dad used to love fishing so when it was warm, we used to go down to Burrill Lake, near Ulladulla on the NSW South Coast. We would go fishing at the beach and lakes. And there is this beautiful little golf course at Mollymook. In winter we’d always go to Yamba on the Far North Coast – it’s a fantastic little place with great rock fishing.

One year we took a boat up to Proserpine and around the Whitsunday islands. It was amazing; we saw phenomenal coral. I was probably about 10 at the time and seeing the Great Barrier Reef for the first time was such an extraordinary experience. Most Australians, sadly, just don’t really get how beautiful this country is.

I usually go on eating holidays but this is an amazing place [Wolgan Valley Resort], I’d love to come back here. Another amazing place I’ve been to is Southern Ocean Lodge on Kangaroo Island – fire, winter, angry sea smashing against these incredible cliffs. I mean, I could sit and watch that for hours with a Jeff Grosset riesling in my hand. It’s a truly extraordinary place.

I was also lucky enough to go to Lizard Island in Queensland, which is an amazing place. One of the greatest things about it is that it’s not another ‘everything is pristine and perfect’ kind of resort; there’s this incredible, natural rustic-ness to it that is just so tranquil. I was only there for two nights but I felt like I’d been away for a week… and I was working!

What is so special about Wolgan Valley?

Place. One of the most important things whether you have a resort, a restaurant, or whatever, is how it fits into that location, and why it belongs there. When you’re here, because it’s so integrated into the space that it’s in; there’s tranquillity, it feels special. All places that manage to do that are great places to be.