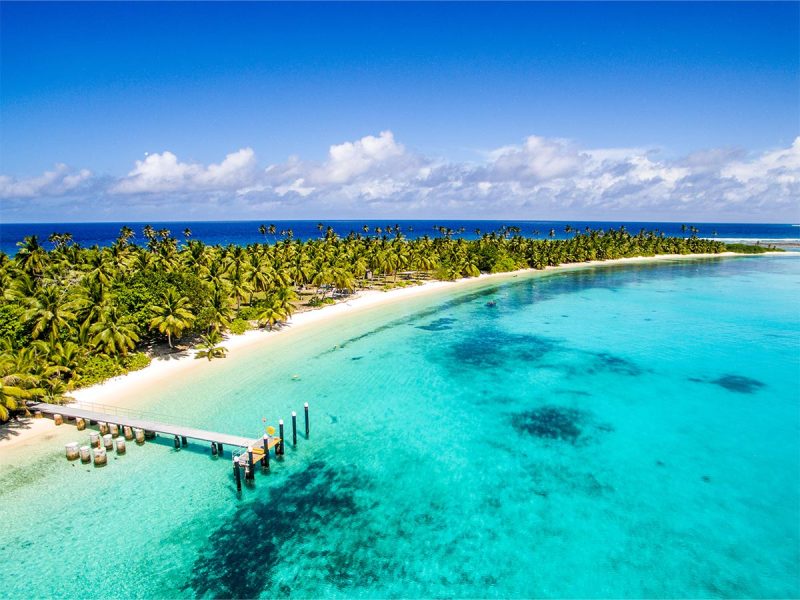 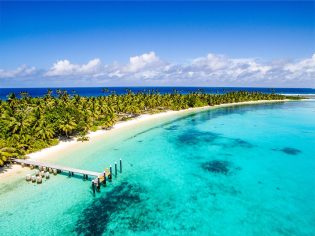 Flip open a map of Australia, wave a magnifying glass some 2,700 km north-west of Perth and you’ll find Cocos (Keeling) Islands glistening in the Indian Ocean.

Look closer: twenty-seven sand-smudged islands don’t so much leap from the ocean, as lay luxuriating in blissful blue-gem waters.

One of only three external Australian territories, reached by a 4.5-hour flight from Perth International Airport, little-known Cocos (Keeling) Islands is set to snag a slot in the nation’s top ten secluded islands chart.

Arm yourself with a knowledge of the rich history before heading on your Cocos (Keeling) island holiday, then wrap yourself in Cocos’ balmy days, far from the madding crowds.

Only two of the 27 islands, West Island – the main tourist hub, and Home Island – the cultural hub, are inhabited with a population of around 600.

It’s where travellers flick on the off-grid button and reconnect to the natural world around them.

If people-watching is on your agenda, look elsewhere. But if the great Greta Garbo’s whimsy, “I want to be alone” tops your holiday agenda, you’ve found the ultimate landing place.

Cocos’ deserted beaches skirt isles where silken sand slips into a crystal-clear ocean created for downtime. Don your snorkel, pack your beach bag, and add a good read – tranquillity is just the throw of a sand-ball away. 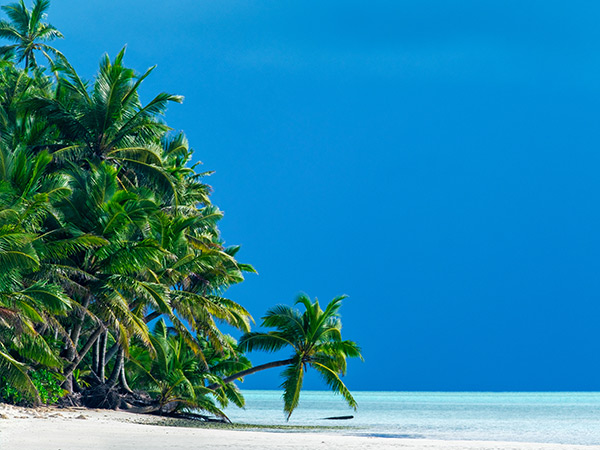 Catch the local ferry – Cahaya Baru – from West to Home Island. On arrival, listen for the soulful Islamic call to prayer coming from the village mosque. It will give you a sense of the Cocos Malay’s peaceful existence, but it wasn’t always so.

Back in 1826, slaves, mostly of Malay descent, were transported over by Alexander Hare, a British sea merchant and known womaniser, to work in the islands’ coconut plantations. Conditions were tough, living quarters basic, food rationed, hours long and laborious.

Hare, and Scottish sea captain John Clunies-Ross, ruled the settlements and plantations until a fierce rivalry between the two resulted in Hare being forced off the islands.

Influenced by both Asian and Scottish traditions, and cut off from the world at large, the Cocos Malay developed their own dialect.

They even had their own, but worthless currency, which is now displayed in the Pulu Cocos Museum, located in the island’s quiet Malaysian Kampong. 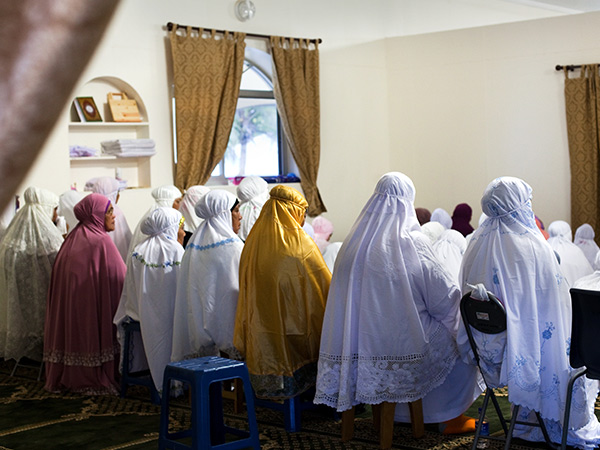 3. The only place in the world you can walk around an entire atoll

If you have time for a little pre-planning and a spare eight hours up your Cocos (Keeling) island holiday sleeve, talk to the Visitor Centre team on West Island about how to island walk, between Islands.

You’ll need to catch the ferry to Home Island – the service runs several times a day. Start your walk around the horseshoe-shaped atoll near Home Island’s sailing club. It’s the only place in the world you can navigate an atoll on foot.

Depending on timing and conditions you may need guidance from a local operator and you’ll definitely want to let the Visitor Centre know when you’re heading off. The staff will give you directions and track your return.

Also, be sure to start at low tide as during high tide it’s impossible to wade through the ocean on foot.

Look out for black-tip reef sharks, turtles, and tropical fish as they play in the shallows. Just below the water’s surface, iridescent clams will open and shut as your shadow falls across their light-sensitive shells. 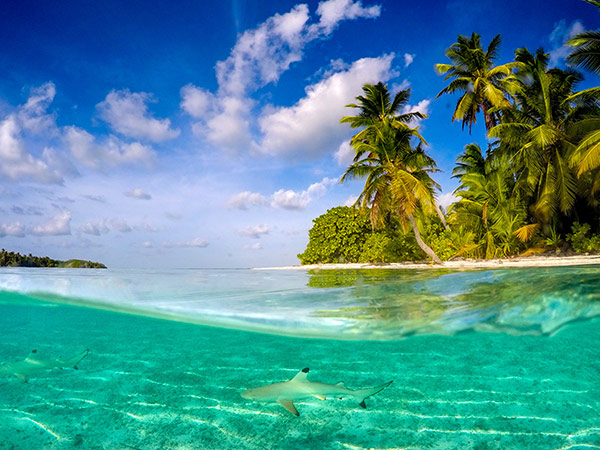 Home Islanders have seen their fair share of hardship, but when Queen Elizabeth II and the late Duke of Edinburgh came to visit in 1954 – after the royal couple’s mainland tour of Australia – the Cocos Malays put on a grandiose welcome.

Everyone was invited to a garden party at Oceania House (the Clunies-Ross residence) where the Queen and Duke met the island’s oldest residents.

With Union Jack flags raised high and cultural dances performed on the streets, the royal couple were farewelled as they boarded the liner SS Gothic, to continue their world tour heading to Sri Lanka.

Chat with older residents on Home Island, and you’ll likely come across someone who remembers the day the royal couple stepped ashore.

It was such a momentous occasion; four Australian stamps were created to commemorate the 50th anniversary of the historical event. 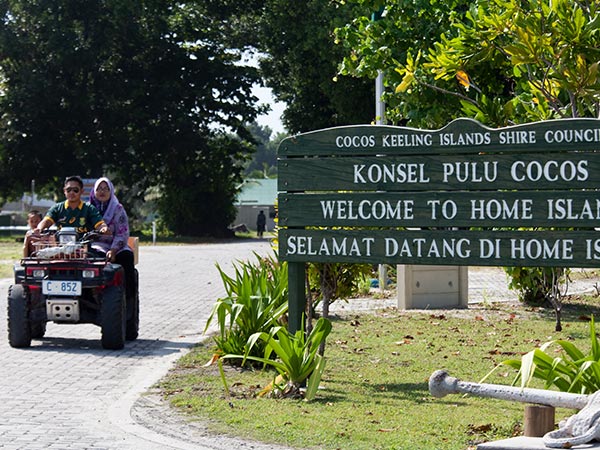 5. Sink a hole-in-one across an international airport runway

For such a pin-sized destination, Cocos packs several ‘world-only’ experiences into its welcome-to-paradise itinerary.

The Cocos Keeling Island golf club boasts the only course in the world with an international runway. Join friendly club-swinging locals, and play Scroungers Golf on a Thursday afternoon.

The West Islanders will assist with your wardrobe too (thongs, t-shirt, boardies) and show you the ropes – namely, where to pop a couple of cold ones between your golf clubs.

Your teammates will introduce you to the course’s ‘creative’ rules and have you chuckling all the way to the ninth hole. Stay for the winner announcements where there are signature Cocos Golf Club balls up for grabs. 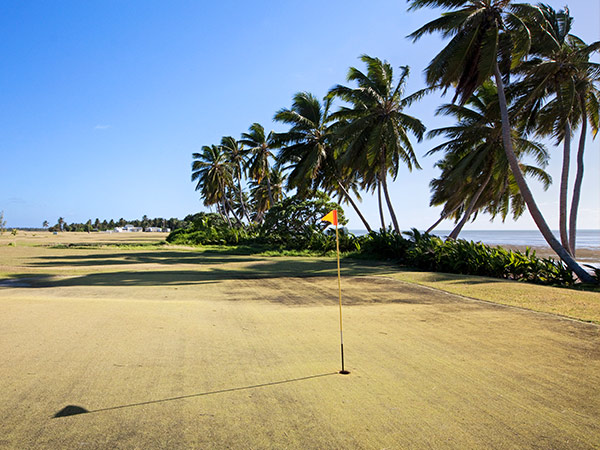 With a handful of petty crimes tried throughout the year by a judge who comes across from mainland Australia, Cocos is rare indeed.

Police officers lucky enough to receive a two-year posting to the two-man police station rarely reach for their incident logbook.

Residents leave doors unlocked in case neighbours call for the proverbial cup of sugar and keys are left in the ignition if anyone needs wheels. You won’t be judged for thinking you’re in a time warp, stepping back to trustier times.

7. Landing on Cocos is spectacular; and slightly scary

The pilot’s announcement: “Cabin crew, please be seated for landing,” will have you scanning the empty, turquoise-tinged ocean with one question, “Where, exactly?”

The airport has a history too. Due to Cocos’ position in the Indian Ocean, the exposed and unprotected islands became a target during World War II, necessitating the construction of a strategically placed air force base.

Fast forward to 1951 when Qantas, seeing the airport as a potential refuelling site, began using the base for flights crossing the Indian Ocean bound for South Africa.

The route went from Sydney to Perth, across to Cocos, onto Mauritius, and finally to Johannesburg. 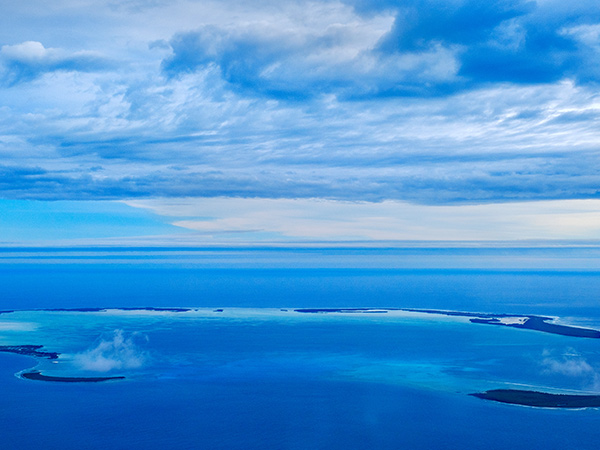 Try not to panic and enjoy the view as you first glimpse the Cocos from your plane. (Image: Lynn Gail)

8. Why Keeling appears the islands’ name

During his voyage from Java to England, Keeling didn’t view the islands as income generators and, after discovering the atolls, never claimed ownership.

He was on a mission to find tropical lands laden with spices and exotic wares to traffic for the East India Company. Tea, opium, silk, indigo, and even slaves, were on the company’s most sought-after items inventory.

9. Cocos sits atop a volcano

When you’re floating aimlessly around the palm-hemmed islets, take a moment to imagine how these glinting gems rose from the Indian Ocean.

The breathtaking isles sit atop an old volcanic seamount, rising some 5,000 metres from the ocean floor. Scientific studies show the islands are adolescents, between 3,000 and 4,000 years old.

When you consider Australia is home to the world’s oldest geological rock, dating back over 3,000 million years, Cocos is indeed the new kid on the block.

But only the strong survive – there is no lifeform when atolls forge, all animal and plant life must survive the ocean before becoming established.

In March 2022, Parks Australia declared the Cocos (Keeling) Islands marine park a protected area. So if you swim, snorkel, or dive, marvel at the many incredible species which have clung on to survive and thrive around the healthy reefs and in deeper ocean waters. 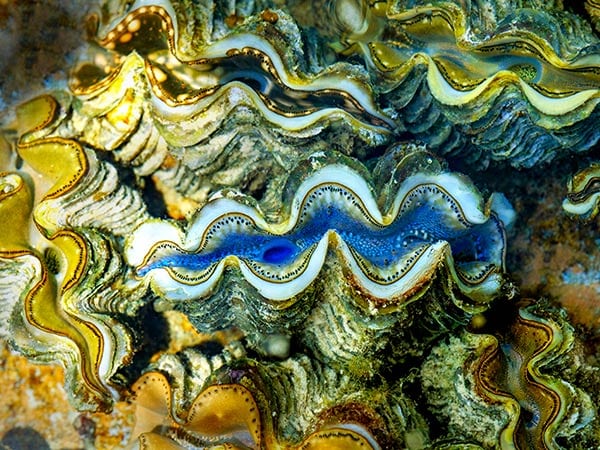 10. A mermaid lives on Prison Island

Legend has it the Cocos Malay believe a mermaid lives on Prison Island and calls any Cocos-born islanders home if they leave her shores.

Alexander Hare’s hut stroke harem housed 40 Cocos Malay women on the island until they gradually escaped across the water to settle on Home Island.

Sadly, the picturesque isle is slowly being washed away by rising tides. What was once covered in swaying palms bearing hinged hammocks, is now a sandy mound.

Visit before it disappears and wonder how those island women survived there with so few comforts, serving one man.

The black-tip reef sharks gently riding the waves to shore will bring you back to its now serene surroundings. 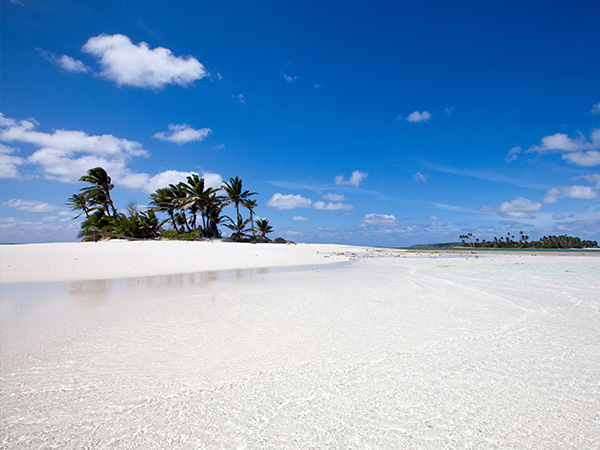 They built themselves a lavish stately mansion on 12-acres of botanical garden overlooking a lagoon. Furnished with palatial trimmings, Oceania House – with its seven-bedrooms, six-bathrooms, grand ballroom, and central spiral staircase – was completed in 1904, becoming a heritage-listed residence in 2004.

The Clunies-Ross family retained the land until 1993, when the two-storey home was sold to the Federal Government for $1.2m.

Avid historians and antique collectors, Avril and Lloyd Leist purchased the property some 20 years ago, restoring it to its former 19th-century glory. The couple turned the residence into a bed and breakfast, offering visitors a Victorian-themed stay.

The infamous property is now under new ownership, having recently changed hands again, with plans to refurbish the bed and breakfast. Book yourself in and meet the friendly ghosts reputed to roam the hallways at night. 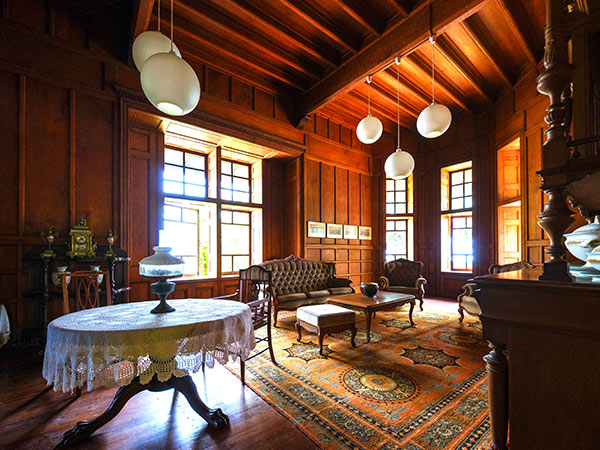 Stay the night at Oceania House – the family home of the ‘Kings of Cocos’. (Image: Lynn Gail)

12. Two external territories are better than one

You’ve come all this way, so why not explore Christmas Island – Cocos’ nearest neighbour, a 1.5-hour flight away.

Unlike the gentle jewelled isles of Cocos, its jungle-clad landscape rises to 1,184 feet at its highest point.

The island is home to weird and wonderful creatures, and a birder’s paradise to boot. The famous Christmas Island red crab roams the craggy outcrop like they’re the Kings of Christmas. The huge resident robber crab can crack a coconut open with its powerful pincer claws.

If you go, check out the Chinese temples – Taoist and Buddhist pagodas are dotted throughout the easy-to-navigate forest. The views across the vast Indian Ocean, where some of the world’s best diving spots are located, will take your breath away. 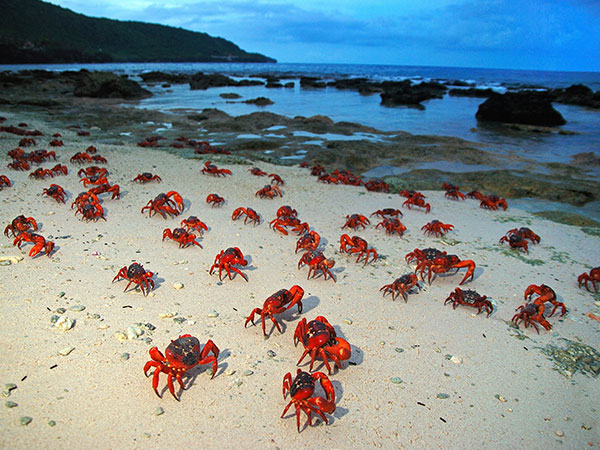 After his voyage to Cocos on the HMS Beagle in 1836, Charles Darwin formed his theory of atoll formation.

Darwin believed volcanic islands that were subsiding in the Pacific Ocean would eventually create a coral atoll. During his visit to the tropical islands, he found evidence to support his theory and after returning to England his material was met with enthusiasm. 14. Cocos featured in both WWI and WWII

For a minute land mass, Cocos has a measured history in the fact the islands were involved in both WWI and WWII.

During WWI the Royal Australian Navy saw its first victory at sea on the HMAS Sydney when they managed to sink the German ship, SMS Emden, in a surprise attack on 9 November 1914.

And in WWII Direction Island became the cable station and therefore a vital link for communication between the United Kingdom, Australia and New Zealand.

Now you know the history, you can discover more about your Cocos (Keeling) Island holiday here, and start planning your adventure here. 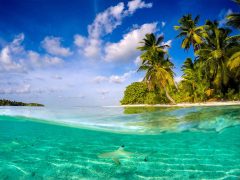 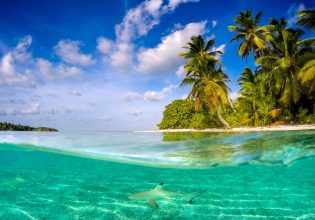 The best things to do on the Cocos (Keeling) Islands

The ‘welcome to Paradise’ brochures handed out at Cocos (Keeling) Islands’ airport after half a day’s travel from Perth perfectly encapsulate ... 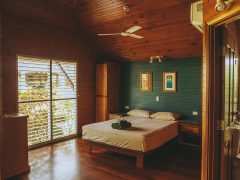 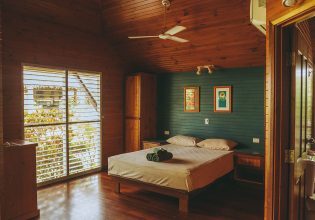 Your complete guide to accommodation on Cocos (Keeling) Islands

You’ve scoured the internet for an untrampled nature-based destination and happened upon Cocos (Keeling) Islands – a tropical, coconut palm-covere...