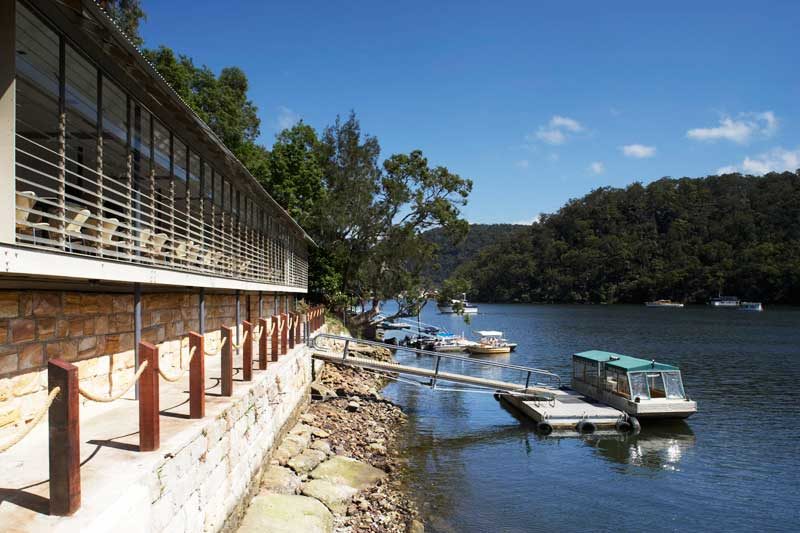 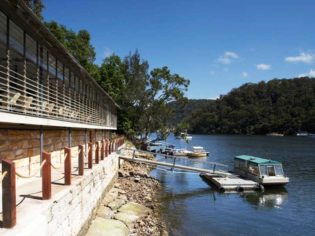 Perched on the banks of the Hawkesbury river north of Sydney, AT wines and dines along the waterline at Berowra Waters Inn for a dining experience that, if possible, seems overshadowed by the surrounds. By Lisa Perkovic who, like all AT reviewers,  paid her own way and visited anonymously.

Degustation is all about tasting. You want to be wowed and left wanting more – anticipating the next dish, ruminating over the last and, at the end, left supremely satisfied. It’s about appreciation and perfection.

At Berowra Waters Inn, perched against a cliff face along the Hawkesbury River in Ku-ring-gai National Park, a new style of degustation is being experienced.

Having reopened in November 2007 after a ten-year hiatus, the Inn’s culinary history reads like an honour roll of Australia’s best and brightest – Judy McMahon, Neil Perry, Sean Moran and Tony Bilson, to name a few. It’s accessible only by water or air; the Inn’s private ferry picks up diners from the Berowra Waters jetty, a 40min drive from Sydney’s CBD.

Escaping the city is what dining here is all about. The Glenn Murcutt-designed glass gallery gives the European seating an Australian twist. We sit bistro style, gazing through wall-to-ceiling windows at the water traffic drifting by. Blackbutt timber floors, sandstone fireplaces and white leather chairs create an understated elegance. Although the bucket-like wicker lampshades are hazardous when sliding into your couch, they’re an element of the décor that reminds us we’re in the bush – and that it’s the view, not the venue, that’s supposed to take your breath away.

The menu appears to follow a similar principle. The 15 or so dishes that change weekly have nothing to prove. Instead, they reflect the self-assurance of a sublimely successful chef. Swiss-born Dietmar Sawyere, who cut his teeth at the Savoy in London, saves culinary flourishes for his high-rise masterpiece, Forty One, in Sydney’s Chifley Tower. Out here in the National Park, the flair is found in fresh, organic produce that’s allowed to speak for itself.

A standard degustation involves selecting four, five or six plates. I opt for six, which begin with the arrival of three plump spinach and buffalo ricotta ravioli. The fresh pasta is stretched thin over chubby packages, giving the filling’s delicate flavour space to shine. Divine sautéed Chanterelle mushrooms add kick to the buffalo milk. Each is devoured and savoured – but expectation of what’s to come sees one little ravioli left on the plate.

Not so for my lunch companion. He spends the break between courses raving about grilled sea scallops perched on herb risotto cooked to perfection; three little golden gems given sparkle by cubes of chorizo. There’s not a skerrick left on his plate for me to sample.

We leave the wine matching to able sommelier Laiana Ryan and I’m grateful for the savoury undertones of the Bass Phillip Gamay 2006 from Gippsland that accompanies my next dish. The roasted squab pigeon is dense and gamey, with a swirl of spaghettini that’s a little too reminiscent of the ravioli. That’s followed by a roast lamb cutlet, the highlight of which is, again, the fungi. I’ve never sampled so many varieties of mushroom in a single sitting; these last are black trompette, and make the ideal woody partner for the lean Castricum lamb.

A 2007 Uncut Shiraz from SA’s Gemtree Vineyards pairs perfectly with the meal’s crowning glory: two slices of roasted wagyu that are melt-in-your-mouth, fight-off-your-dinner-partner morsels. Luckily we’ve both ordered the same dish – and it is fantastic. Lightly battered onion rings and microscopic cubed potatoes lend crunch to the tender fillet.

The cheese plate’s most memorable piece is an of the moment, ash-covered goat cheese from award-winning Jannei Goat Dairy’s Bûche Noir – a clean, citric sliver that clears the deck. Our dessert plate is an interesting assemblage of adventurous pairings and traditional dishes. No surprises with a white chocolate panna cotta, but lemon and lime tart is given a new lease of life with sweet basil sorbet. Before I’ve worked out whether I like an unusual tang with my tart, I’m nudged over to a hazelnut-ricotta cake that’s outdone by an accompanying espresso granita. The frosty caffeine clout wakens the tastebuds; a good thing as you’ll want to savour the vacherin of raspberries and vanilla bean ice cream that’s an ode to a long and happy summer.

Berowra Waters Inn is without question a “special occasion” destination. While we’re oblivious to anything but dessert, the staff are on the ball when the table adjacent develops a sudden and urgent need for bubbles. No sooner has the ring been slipped onto our neighbour’s shaking finger than the champagne is on the table with a congratulatory plate of petit fours.

The relaxed demeanour of staff and the casual dining set-up is refreshing, if a little at odds with the demands of degustation. It’s as though Chef Sawyere knows he’s been outshone; the scenery steals the show and gives the degustation a place in the chorus.

The highlight of the day comes when the food is cleared away. My stomach is full, the crowds are gone and we linger over shortbread and chocolate nibbles as dusk settles in the valley. It’s taken a four-hour lunch to wash the rush of city life away, but once it has, we’re well and truly wowed.