The best bars & breweries on the Central Coast 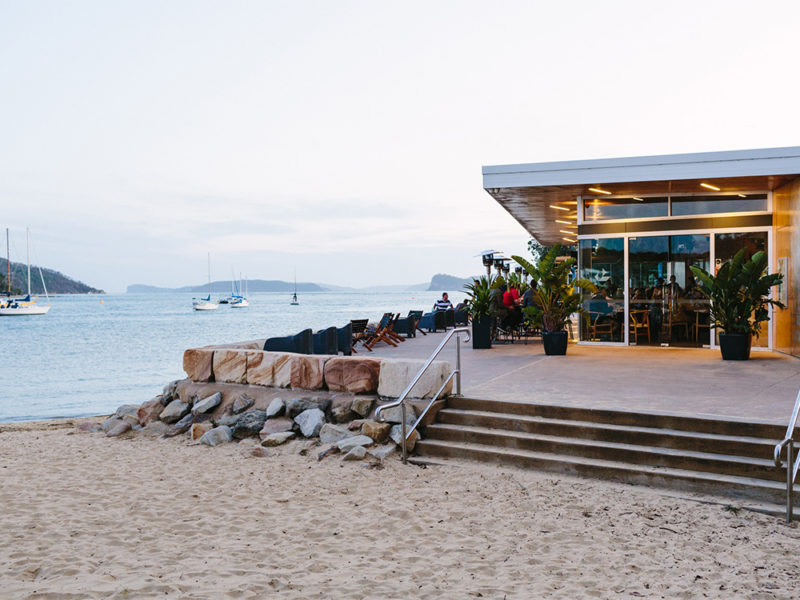 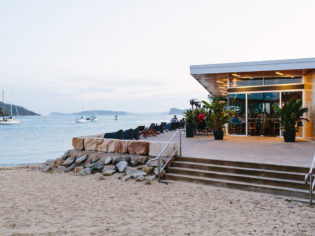 New and old drinking dens are spicing things up on the Central Coast, offering holidaymakers plenty of options for bar-hopping in this slice of paradise.

So close to Sydney, NSW’s Central Coast has benefited from an influx of young foodies and publicans setting up shop. This former sleepy holiday region has grown into a hub of hospitality, providing cultured options for the adults among us. And while a slew of restaurant openings have certainly fed the hungry, the thirsty have been rewarded with a number of heavy-hitting bars and breweries. Here, we list our favourites.

Don’t miss: Where to eat & drink on the Central Coast

The Box On The Water

The newly developed Ettalong Beach foreshore offers punters many things: sprawling views across Broken Bay, ample opportunities for dog spotting, and a pearler seat for sundowners – provided you’re in the right spot, and The Box On The Water definitely falls into that category. Floor-to-ceiling windows grant panoramic views across Broken Bay to its namesake, Box Head, and over to Sydney’s Northern Beaches.

The Beach kiosk offers casual dining, drinks and snacks, while the adjoining restaurant serves upscale Australian fare. The BOX bar provides a spot for drinks only, which can be enjoyed anywhere within its licensed area, including along the seawall. Grab one of the five spritzes or four on-tap rosé’s and nab an alfresco spot for a picture-perfect sunset. 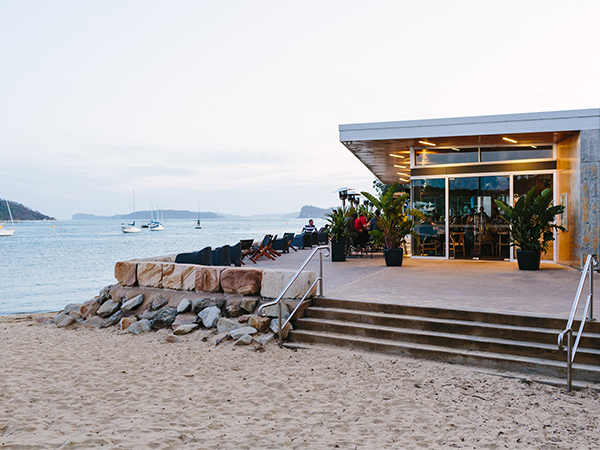 The Box On The Water is situated on the newly developed Ettalong Beach foreshore.

Caribbean-themed Mumbo Jumbo is more than just your classic rooftop bar. Founded by four local childhood friends, the space oozes chilled island vibes. Guests are transported through reggae rhythms, colourful quirky interiors and an aromatic Jamaican flavoured food and drinks menu. Espresso martinis are served on tap, alongside tropical cocktails and all the classic wines and beers. There is a chef that cooks on an alfresco barbeque, and music turned up so you can actually hear the tunes. Wherever possible, recycled materials have been used. Tables are made from old timber fencing and the bar is made from upcycled wood. 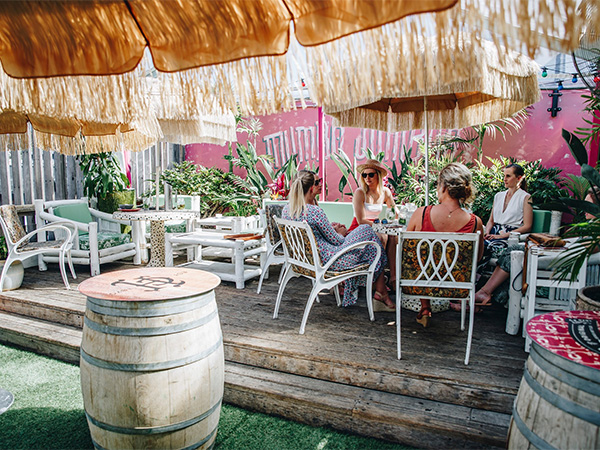 Find good vibes only at the Caribbean-themed Mumbo Jumbo in Terrigal.

Don’t miss: The 10 best beaches on the Central Coast

Situated a stone’s throw from Terrigal Beach, Pocket Bar serves as the Central Coast’s sister venue to Sydney’s Stitch Bar and Button Bar. Inside, they combine modern mixology techniques with classic cocktail recipes – alongside fun snacks, of course. The funky loft space is lined with big couches and tables. There are plants hanging overhead and a wall of spirits to gaze at.

Like its city counterparts, the cocktails are the big-ticket item at Pocket Bar. The Penic(h)illin features a double dose of Dewar’s White Label, homemade spiced honey syrup, fresh ginger and a small spoonful of Laphroaig 10-year old scotch. Or perhaps a punchy Rhinestone Cowboy (Cazadores Blanco, Del Maguey, hibiscus, vanilla, lime, ginger beer and burlesque bitters) is more your speed. Dial it back with a relaxed wine or beer from the ever-expanding list paired with a tapas plate and watch the locals pass by. 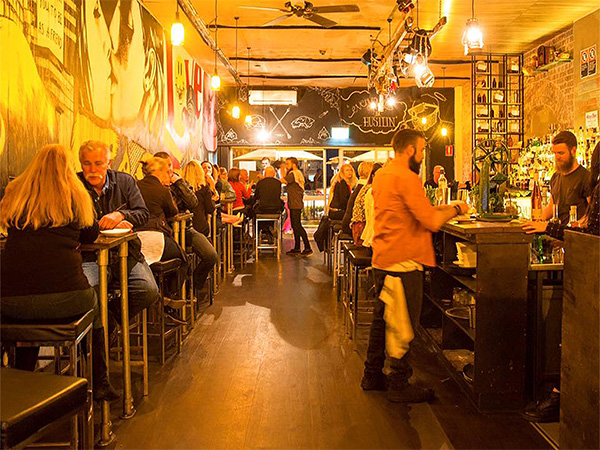 The funky loft space in Pocket Bar is lined with big couches and tables.

A session at the Avoca Surf House feels quintessentially Australian. The space makes the most of its prime position with panoramic glass walls that face Avoca Beach. And, like any self-respecting beachside restaurant, it offers a hefty seafood menu featuring freshly shucked oysters and fried fish tacos. Barside, spritzes and sparkling wines go nicely with the view. The wine list heroes local Australian drops from Margaret River, Hunter Valley and the Barossa – while featuring some International bottles as well.

This slick community hub also offers yoga, workshops, talks, book clubs and more alongside its bar and restaurant. So next time you’re in town, do as the locals do and partake in a Surf House session. 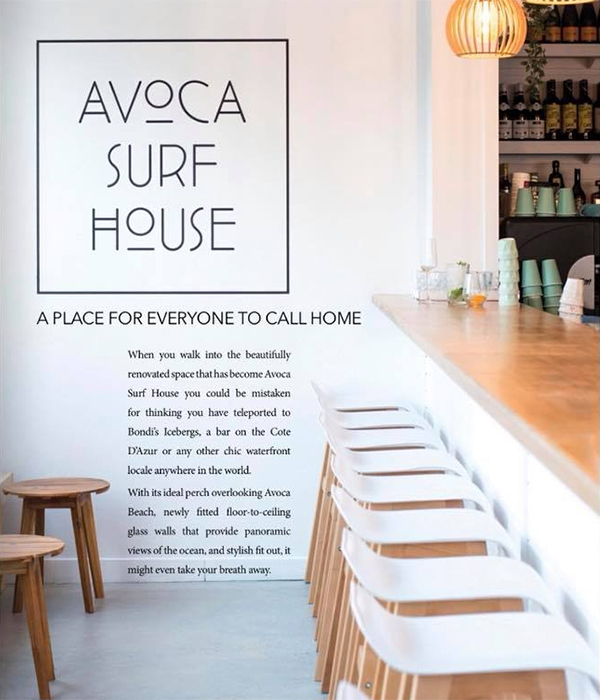 Don’t miss: The best walks & hikes on the Central Coast

If you read any New York newspapers, you might recognise Rupert Noffs and Matty Bennett’s names from The Village Voice. Their Manhattan venture of the same name was the toast of the town, so there was a bit of an adjustment when they swapped the Big Apple for Woy Woy on the Central Coast. The partners in life and business relocated to Hardy’s Bay and brought with them the similar blend of Asian flavours that made them so famous in the first place. Bao Buns are stuffed with twice-cooked pork hock, mapo tofu comes in cups of iceberg lettuce and fish of the day is coated with Sichuan pepper and salt then fried.

The international influences continue to the bar. A wine list comes by way of German Riesling, French Champagne and Brut Etoile from the Loire Valley. Locally, try a Sauvignon Blanc from Tasmania or a Cabernet Sauvignon from the Barossa. All this is packaged within a lively atmosphere (book in advance!) right on the shores of Hardy’s Bay. 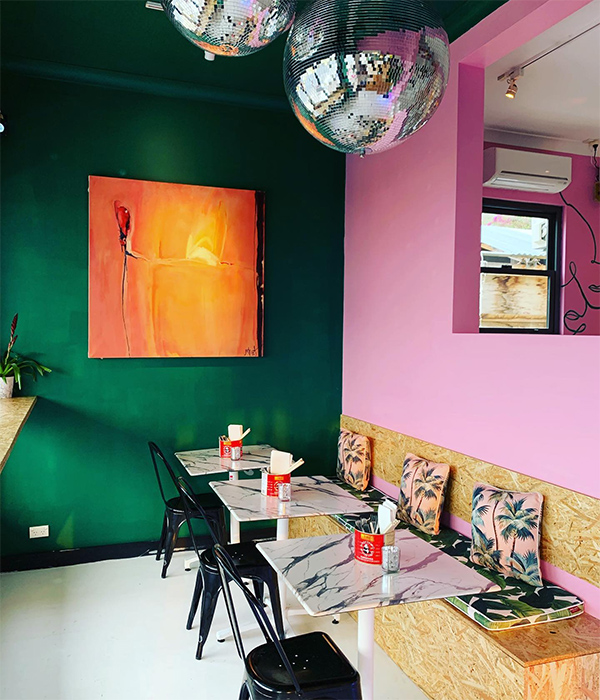 Enjoy the lively atmosphere of The Lucky Bee right on the shores of Hardy’s Bay.

If it’s Hampton’s ambience you seek, the beachy whites and seaside greens of Margarita Daze will more than deliver. This Ocean beach bar and restaurant is one of Umina’s most upscale hangouts, with sandy shores and endless waterfront right at your doorstep. The Daze Margarita is one of the signature cocktails, with Jose Cuervo, triple sec, fresh lime and sugar, shaken and dumped on the rocks. The Salted Caramel Espresso Martini features salted caramel vodka, Kahlua, espresso coffee and caramel syrup shaken then strained into a caramel rimmed martini glass – it will put hairs on your chest. Socialising is encouraged from sunrise to sunset so take a seat at this window to the Central Coast. 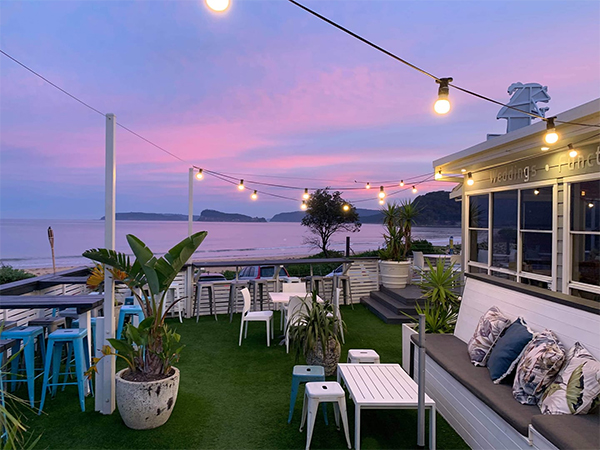 Socialise from sunrise to sunset at Margarita Daze.

Yes, they nail their wood-fired pizzas and shine by way of classic Italian fare, but Rhonda’s also provides a great spot for a cocktail. Located mere minutes from the beach, this rooftop alfresco gem is packed with punters sporting sandy feet and wet hair. As the sun makes its way toward the horizon, feel the sea breeze and sip on a house-made Limoncello or Aperol Spritz. The comfortable linen lounges are tucked between table settings, separated by contemporary artworks and whitewashed frameworks. The rooftop vantage point stretches the entire length of the frontage. It also overlooks the Crowne Plaza’s popular beer garden for ample people-watching opportunities. You’ll find solace well into the evening when the DJ’s start playing, cocktail in hand. 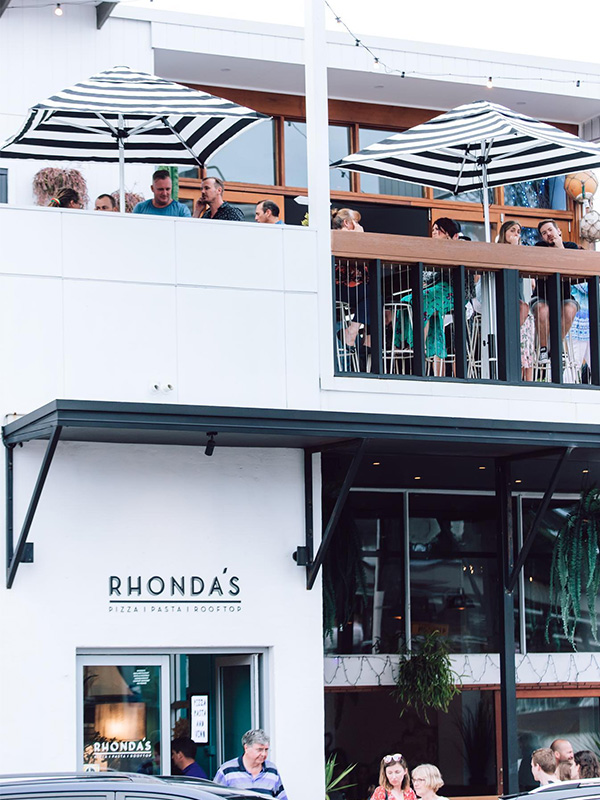 Feel the sea breeze and sip on a house-made Limoncello or Aperol Spritz at Rhonda’s.

It’s clear that Central Coasties are partial to a good rooftop tipple, and few venues shine at bright as it’s first: Frankie’s. Make the climb for views of Brisbane Water and a shot of whiskey. There are 40 varieties to choose from, dangerously placed alongside 15 gins and 12 rums. However, it’s the Chartreuse that has the town buzzing. It was originally created as the ‘elixir of life’ by French monks back in the 1600s. To this day, only a couple of people know the secret 130 botanical recipe, which is sourced from all corners of the globe. Frankie’s is one of only a handful of bars in Australia to offer the whole Chartreuse range – it’s worth the drive to Woy Woy. Consider the party started.

Bar Toto makes a case for elegance on the Central Coast. Since its establishment in 2013, it has brought back the old-world charm of wining and dining with an ode to the best of chic Europe. Australia’s top 100 cocktail craftsman Peter Clarke is the Coast’s cocktail king. The crafted list will transport you straight to the Mediterranean – the Italian classics like Negroni’s, Aperol’s and Garabaldi’s do it best. The coffee cocktails also shine and provide a kick for those who need them. For food, international pizza competition medallist Jerry Altavilla mans the ovens. Take a seat on a leather sofa and watch the magic unfold before you. 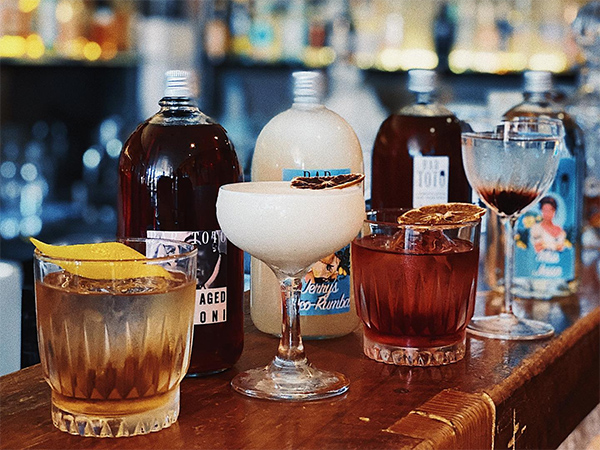 Bar Toto’s well-crafted cocktail list will transport you straight to the Mediterranean.

Six String Brewery began as a home brewing hobby developed from a genuine love of good beer. And like any good side hustle, it evolved into the first home-grown craft brewery and tasting room on the Central Coast. Nowadays, the taproom is a popular watering hole that showcases the award-winning brews produced on site. Lovers and novices can come in and learn about the process – touching, smelling and tasting the ingredients along the way. There are over 12 taps in rotation at any given time which are all preservative-free, unpasteurised and unfiltered.

Donnie Eats sling their mouth-watering burgers on site. Tours of the brewery are run on Saturday mornings and Brew Days are run once a month, where you can learn the craft of brewing. You will also find Six String available at many establishments across the region. 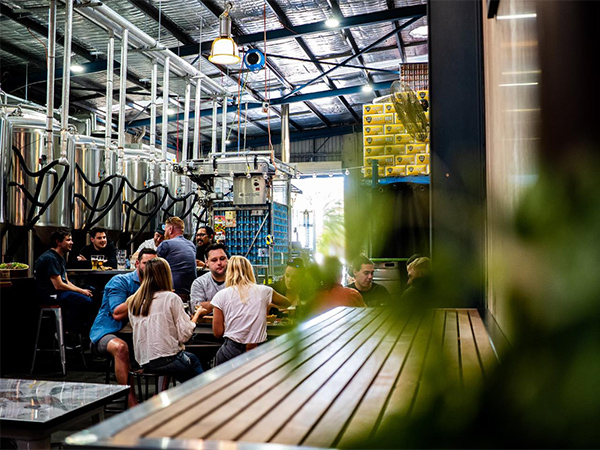 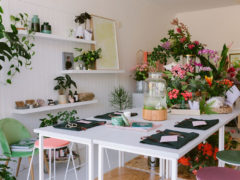 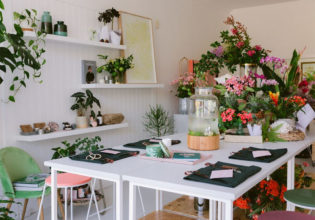 From premium fashion to vintage finds to gorgeous homewares, we round up 12 of the best stores to browse while on the Central Coast. 1. La Boheme, Te... 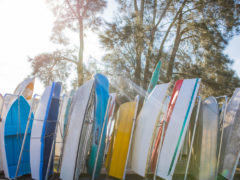 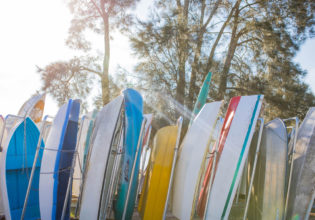 The Central Coast is a sprawling region comprising of pristine beaches, leafy hinterland, and quaint and cool coastal towns. It’s the perfect place ... 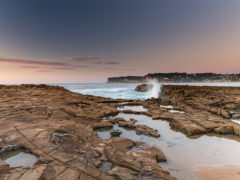 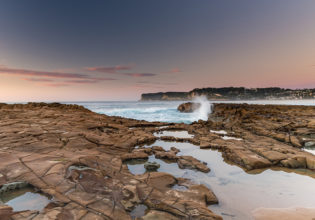 10 of the best beaches on the Central Coast, NSW

Home to more than 40 beaches that occupy an 87-kilometre coastline, the Central Coast of New South Wales is the perfect summer holiday destination. B...