A first-timer's guide to houseboating on the Hawkesbury 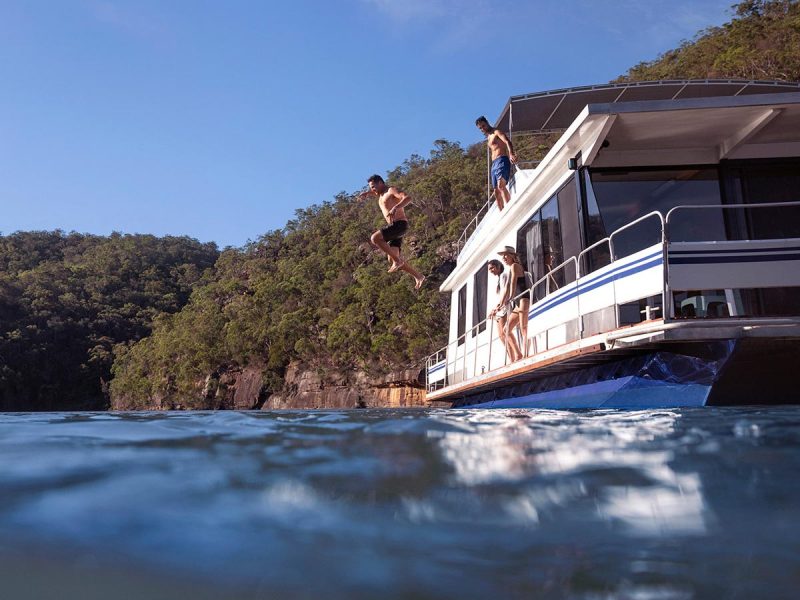 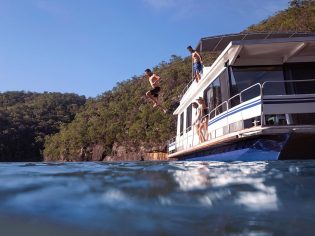 Whether you’re organising a get-together with extended family, planning a weekend getaway with a group of friends, or looking for a romantic and unconventional break for two, there’s a houseboat to suit.

While Australia has plenty of boating holidays up its sleeve, there’s nothing quite like a jaunt on the Hawkesbury River. At the heart of the river, inland between Sydney and the Central Coast, lies the charming riverside village of Wisemans Ferry – it’s here, at the oldest ferry crossing still in operation in NSW, that your houseboat sojourn on the Hawkesbury will begin. But before you set out, there are a range of details on what to do, where to go, who to book with and what it will cost that first-timers will need to know. Find our guide to everything you need to know about hiring a houseboat on the Hawkesbury below.

Where to book a houseboat on the Hawkesbury

There are a number of different operators on the Hawkesbury, offering everything from rather rustic and dated rooms on water, to sizable, streamlined modern vessels with all the bells and whistles you could possibly want.

Bear in mind that most houseboats sleep 10-12 at a maximum, pets are typically not allowed onboard, and many vessels are not wheelchair accessible. It’s also worth noting that houseboats typically offer a mixture of sleeping arrangements, such as bunk beds and lounge areas that convert into beds, in addition to private double or queen bedrooms – it pays to check these details in advance, particularly if you value your privacy. Find the main operators below. 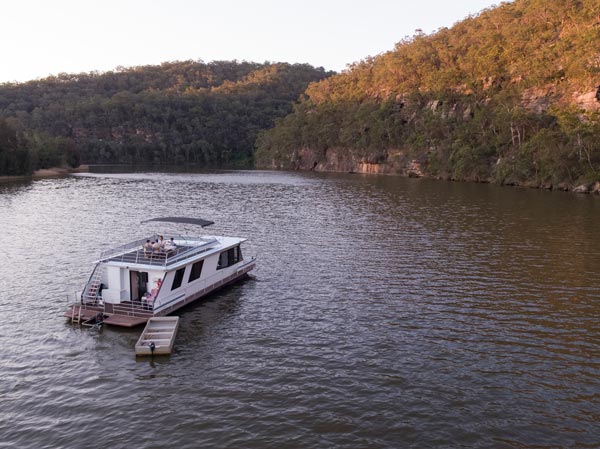 There are a number of different houseboat operators on the Hawkesbury to book with. (Image: Destination NSW)

Able Hawkesbury River Houseboats has nine different vessels for hire, from the basic Aquavan two- to four-berth boats (that measure just eight metres by 2.5) that feature just the bare essentials (two double berths that convert from day lounges, a two-burner cooker and grill, a combined shower and WC, a small fridge and a small TV) to the top-of-the-range 20-metre by eight-metre Five Star Spa, which features five queen bedrooms each with their own en-suite and LCD TV, plus a fully equipped kitchen, a heated 10-person spa and 10-seat outdoor dining set on the upper deck, and outdoor speakers.

Luxury Afloat offers small six-berth houseboats through to more modern 12-berth houseboats, the latter of which are wheelchair accessible. Compared to some other providers on the Hawkesbury, its houseboats are a touch on the smaller side. Luxury Afloat’s houseboats feature in one of two categories: Original Fleet and Star Flight. The former feature a more old-fashioned design and are more compact, while the latter are more spacious and edge toward the luxury end of the spectrum.

Holidays Afloat has a large fleet of 20 houseboats which range from two- to 12-berth. Their largest 47′ vessels are spacious, modern catamaran cruisers that comfortably sleep up to 12 people. The smallest are modern, European-style cruisers sleeping two people. In between are the traditional houseboats sleeping four to 10 people.

If you fancy the novelty of a houseboat, without the hassle of actually driving up and down the river, then consider the Astoria Houseboat – a super chic and rather spacious two-berth option, that’s anchored in the Berowra Waters area.

Hawkesbury Afloat has a number of vessels for hire, including a very spacious 33-foot two- to four-berth boat (the Horizon) and a number of more modern (if spartan) options that can sleep up to 12. Several of its boats have recently undergone renovations (hence the modern fit-outs) and a couple of its houseboats were only just built (dating between 2019 and 2021). 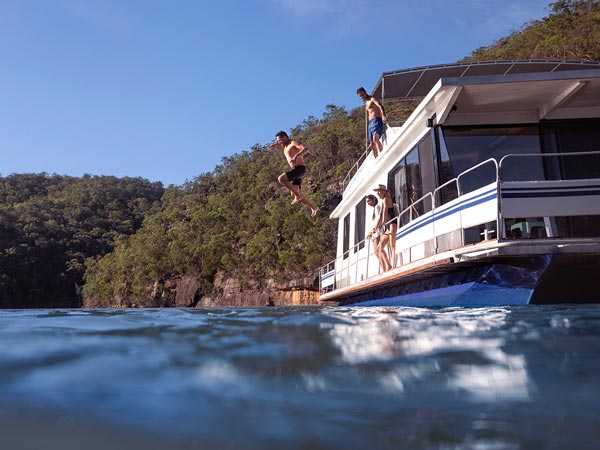 The cost of hiring a houseboat on the Hawkesbury

The cost of hiring a houseboat on the Hawkesbury can fluctuate wildly depending on several different factors, including the size and facilities of the boat, the season, the length of your stay, and whether you opt for a midweek or weekend sojourn.

Expect to pay more over public holidays and in peak season (aka summer), as well as for weekends and for big and luxurious boats. The per night hire price often reduces the longer the stay you book.

Beyond the cost of hiring the boat itself, keep in mind that there are several additional charges that you will need to factor in, including the cost of fuel, and sometimes also gas, used during your stay onboard. The former is typically charged per gallon, and based on current fuel prices, which staff should be able to supply you with. Top tip: travelling with the tide results in more economical fuel usage.

All companies also require a security deposit, with a value that reflects the size and cost of the boat. This fee is collected either at the time of booking, or in the final weeks leading up to your stay. 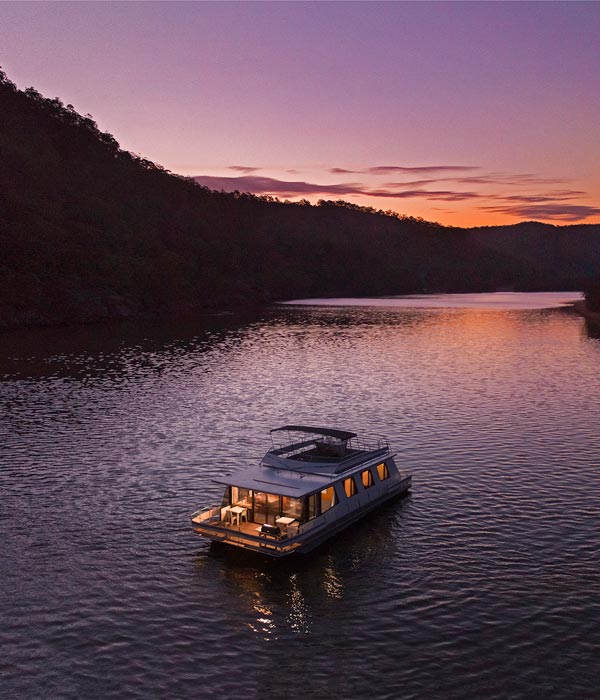 The cost of hiring a houseboat on the Hawkesbury varies wildly. (Image: Destination NSW)

There are several other optional charges too, which some companies levy, including:

What to expect from a houseboat holiday

No experience or boat license is required as vessels do not exceed 10 knots. To get guests up to speed, many local operators will provide a full briefing onboard the vessel, providing a demonstration of how the boat’s controls work, and some show guests a short safety DVD. Some operators also offer to drive guests in and out of the marina, so that they don’t have to worry about docking or launching the boat. You’ll also find a detailed manual on board for reference. And bear in mind that the same road rules regarding drink driving apply to the waterways too! Houseboats are also prohibited from cruising at night due to maritime legislation. 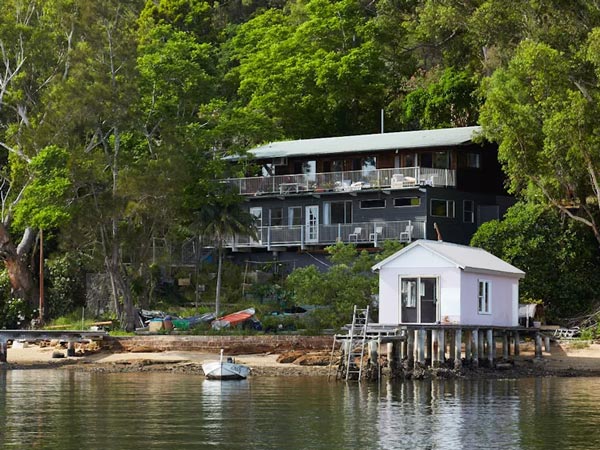 Puttering past a house on Dangar Island. (Image: Alicia Taylor)

Although some of the high-end boats offer the luxury of a little more space, bear in mind that your quarters will likely still be somewhat cramped: it pays to pack light. There may also be restrictions on what electrical items you can use onboard too, as the voltage (often 12 volts) will prevent the use of items such as hairdryers, hair straighteners and cooking appliances.

Many houseboat operators can help out with catering or providing groceries upon request, as long as you give enough advance notice, but there are a small number of general stores that lie in the villages along the Hawkesbury, such as in Brooklyn, Akuna Bay and on Dangar Island. For the best range and price, however, it makes sense to stock up beforehand. There are several restaurants in the region that are well worth your time too, some of which are only accessible by boat. 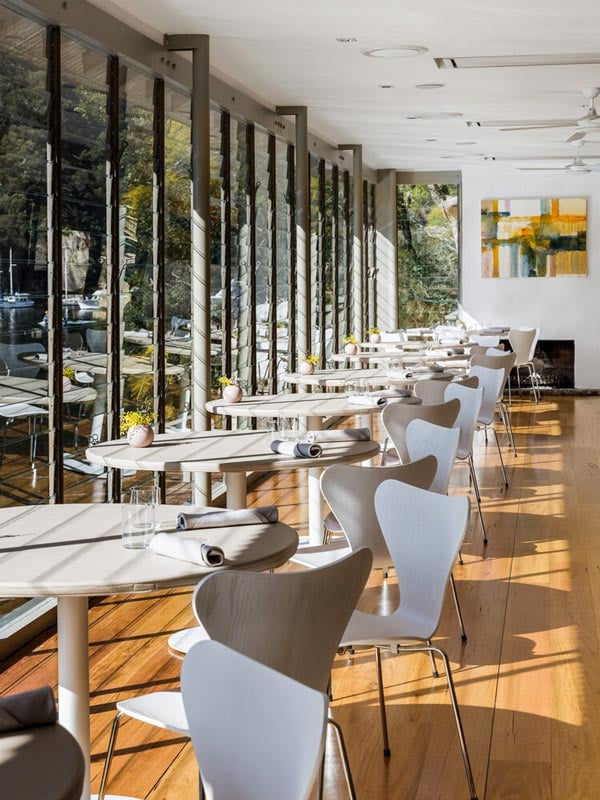 For something a little stylish, dine in at Peats Bite, a Hawkesbury icon. Its seasonal, seven-course lunch (from $135/pp) is renowned. Modern Australian restaurant Berowra Waters Inn is another local standout, offering a six-course degustation from $195/pp. Cottage Point Inn is also a contender worthy of the title ‘best restaurant on the Hawkesbury’ and accessible via houseboat; it has both an a la carte and a tasting menu. Reservations are recommended at the region’s higher-end restaurants. 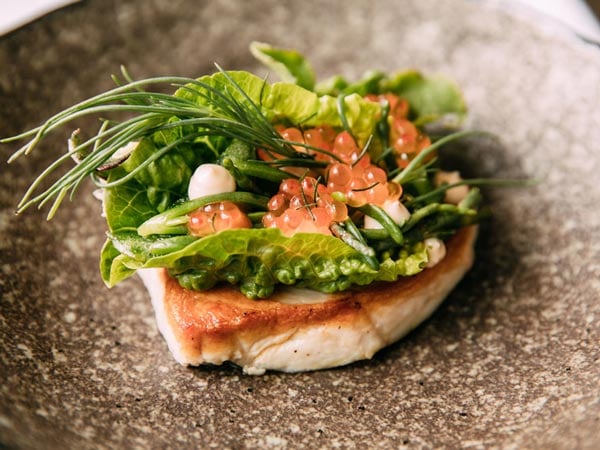 Best things to do on the Hawkesbury

The Hawkesbury River may be sleepy, but there’s plenty to check out. If you’re not content with idling away time watching the world go by, playing cards with friends, or cooking up a storm on the barbie then try one of the below activities out for size…

There are three golf courses close to the Able Marina, and all three are accessible by water. They include the Wisemans Ferry Golf Club, the Del Rio Riverside Resort 9-hole Golf Course, and the Riverside Oaks PGA golf course and clubhouse.

There’s plenty to catch on the Hawkesbury. Depending on the season you might find jewfish, mulloway, mullet, bream, flathead, flounder, snapper, or whiting at the end of your line. Remember that you need a current NSW fishing licence. 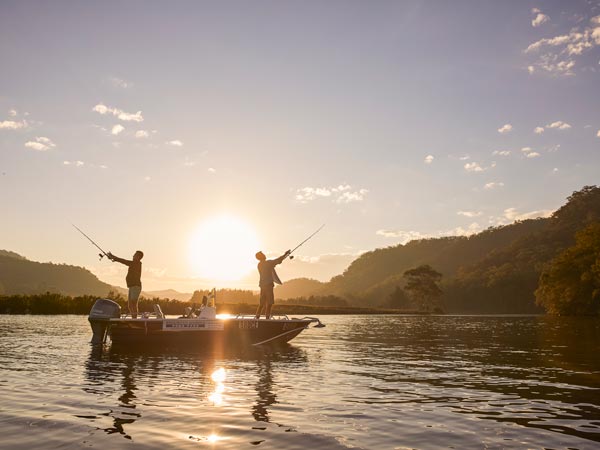 There are plenty of great fishing spots to drop a line on the Hawkesbury. (Image: Destination NSW)

Look closely and you’ll find lots of hidden little inlets perfect for a picnic. Appletree Bay is one popular local spot, with a kiosk in summer, as well as toilets and public barbecues.

There are plenty of walks to take on in these parts, where rugged bushland thrives. Your houseboat provider may be able to offer a few helpful tips. For starters, there’s a nice walking track around Dangar Island that takes about 90 minutes to complete, and offers wonderful views across the water to Long Island, Brooklyn and Little Wobby Beach. 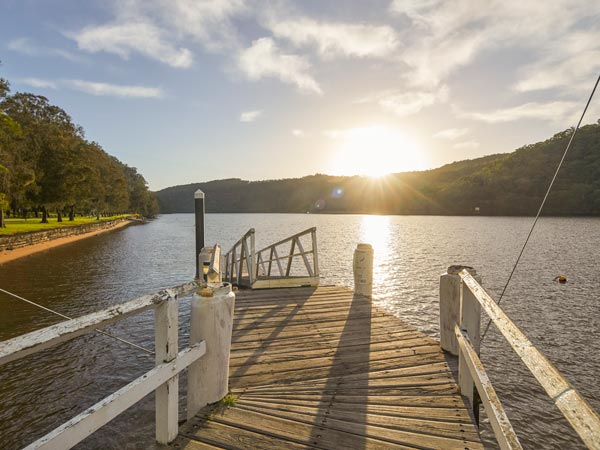 Putter over to Del Rio Resort for a day of golfing. (Image: Destination NSW)

It’s perfectly safe to swim in the river, and many of the larger houseboats even have swimming ladders attached to the back deck, but it’s best to avoid dawn and dusk, and also to swim at the side of the river as the tides can be strong.