A guide to Newcastle’s best pubs, bars and breweries 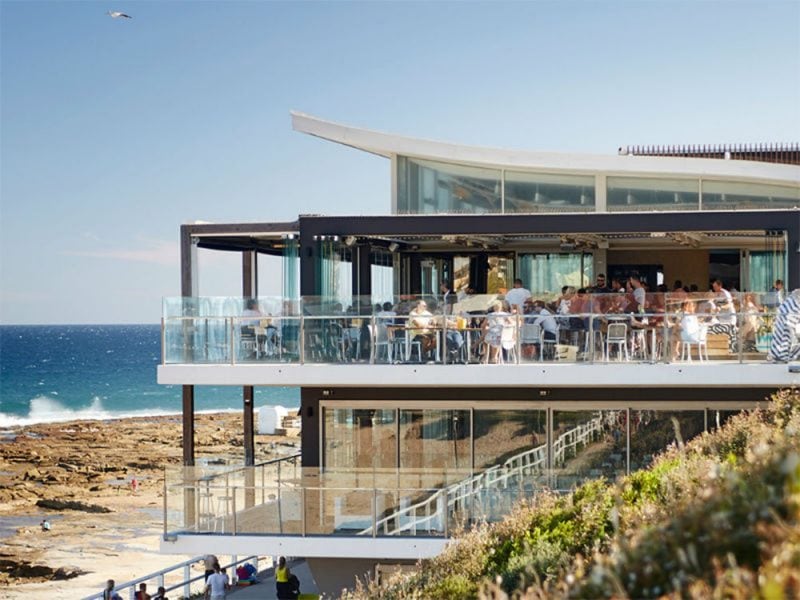 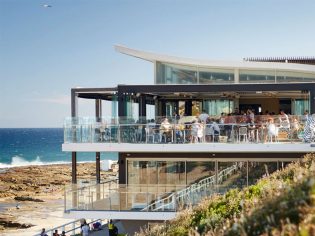 The city of Newcastle’s drinks scene has come of age. Here are some top places for a tipple.

A few decades ago, knock-off drinks in Newcastle amounted to little more than a few full-strength schooners at the pub on a Friday arvo. Oh how the Steel City has evolved. Nowadays, Newcastle is threaded together with everything from ambitious sake bars to swanky waterfront lounges, old-school pubs and atmospheric craft beer halls.

Here are a few of Newcastle’s best pubs, bars and breweries.

The best bars in Newcastle

The band Silverchair was one of Newcastle’s most successful exports and former bassist Chris Joannou remains one of the city’s most successful sons. When his parents retired their commercial laundrette in Newcastle West, the ex-muso turned hospitality star transformed it into The Edwards where locals go to sing themselves hoarse cheering on live bands. Joannou also co-owns Flotilla, located in the back streets of Wickham and The Criterion in Carrington. 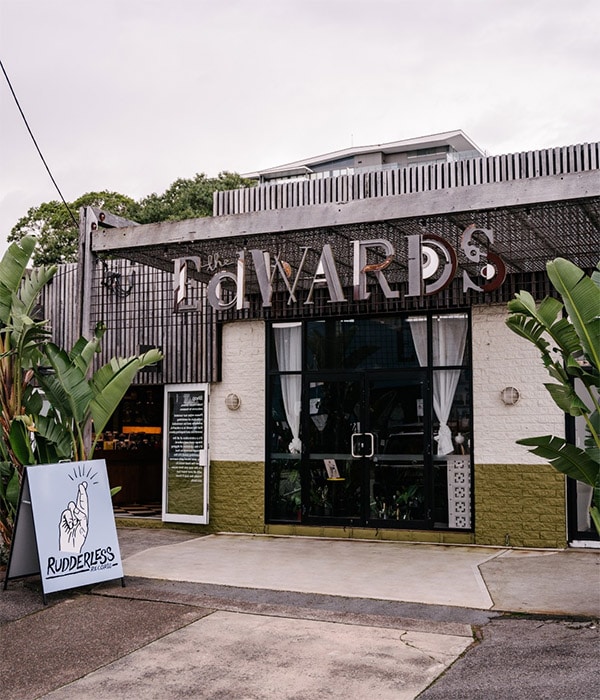 Text a special code to a number on the wall outside this hidden speakeasy to gain entry to Coal & Cedar, a dimly lit speakeasy-style whisky bar with scuffed-up walls and dark timber tones. Here, the drinks are made with attention to detail and the customers look like they’ve all filed in from The Lincoln Room Barbershop & Shaving Parlour next door. 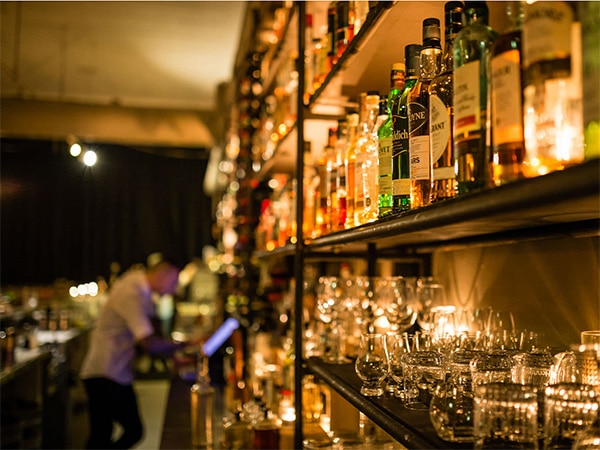 A smorgasboard of options at Coal & Cedar (Photo: Angela Hardy)

Set yourself a reminder to visit The Rum Diary on International Talk Like A Pirate Day and you will feel right at home in this slightly bonkers bar that looks like it has been furnished with the salvaged contents of a shipwreck that hit the nearby seawall. Order the ‘dark and stormy’ and enjoy it with artful excess in the First Ship Captain’s Cigar Lounge. 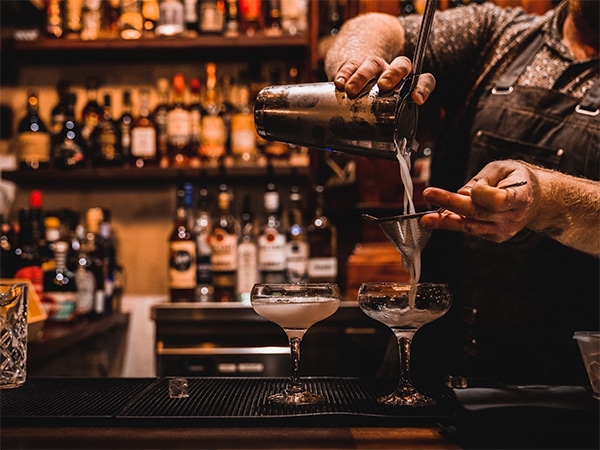 Set yourself a reminder to visit The Rum Diary.

The Koutetsu is a small speakeasy bar located on a ho-hum section of Hunter St. Koutetsu means ‘steel’ in Japanese and is a nod to both the bar’s décor and city’s history as a site for steelworks. Look for the neon sign that whispers ‘TK’ to passers-by and head in past the original window filled with junk and ephemera that celebrates the building’s past as a pawnbroker. 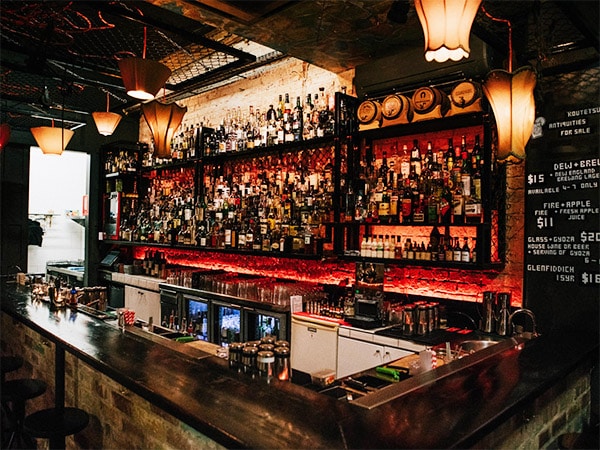 The Koutetsu is a small speakeasy bar on Hunter St. 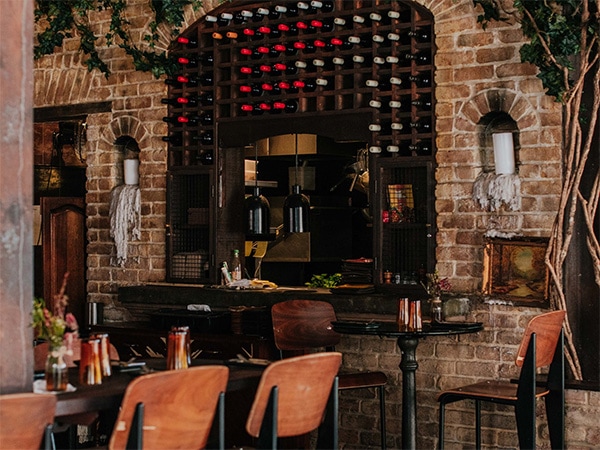 Bunker down at Basement on Market St.

The Falcon has landed. And it’s via Florida in the US where co-owner and chef Brendhan Bennison hails from. Create a Venn diagram of all that The Falcon offers and you’d find common elements such as great food, drinks and vibes intersecting in the circles. The popular Newcastle East haunt, which is famed for its jambalaya, has a sister venue where you can drop anchor in the form of the Ship Inn. 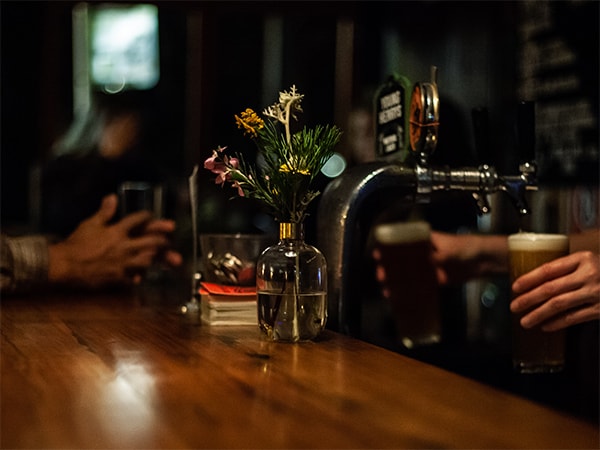 The Falcon has landed.

This shoebox-sized tapas bar presents like an old-school joint for bar bites in a back alley in Barcelona. Rosa Bar is the kind of place you go to before a gig at Lizotte’s or Newcastle Theatre Company. Located in Lambton, the bar has daily specials in addition to bestselling share plates such as spicy chorizo, patatas bravas and empanadas.

A former mechanic’s warehouse has been reimagined as small bar, Saints, an understated hangout with scuffed-up brick walls, neon-bright murals, comfy Chesterfields and a soundtrack of thumping beats. Ask the barkeep to mix up a hyper-local espresso martini using vodka from Newcastle Distilling Company or sling a few G+Ts your way.

Saints is housed in a former mechanic’s warehouse.

Make your way to Merewether Surfhouse after hitting the beach for a surf, walk or swim. The bar has one of the best beach views in Newcastle and is a great example of how Newcastle is morphing to accommodate a whole new demographic. Order spritzers with a side of pizza during Aperitivo Hour from 3.30pm-5pm Monday to Friday. 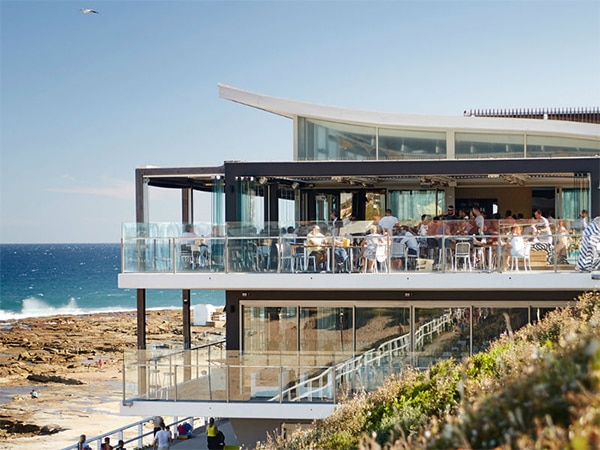 Indulge in an alfresco sundowner at the Surfhouse.

The best pubs in Newcastle

The Beach Hotel is an Art Deco pub that has been given a makeover influenced by its sun-drenched location opposite Merewether Beach. The coastal venue offers big-sky views over Merewether, Dixon Park and Bar beaches: sit and sip by the sea on coconut coladas or craft beers paired with hearty fare such as schnitties, steaks, ribs and burgers. 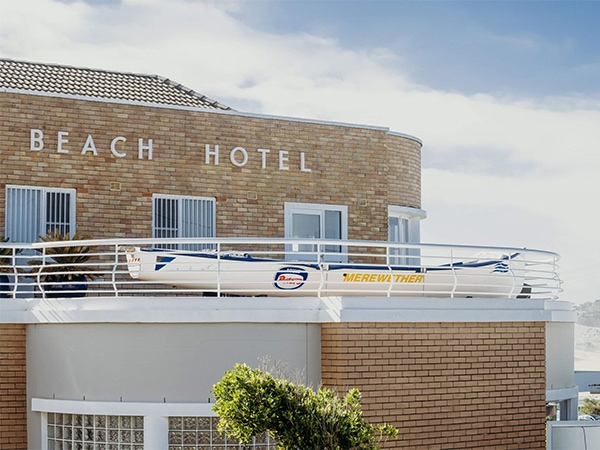 The brick beauty of The Beach Hotel.

An architecture geek’s guide to Newcastle would surely include a pint and a plate of Appellation oysters at the Customs House Hotel in Newcastle. Designed in 1877, the Customs House building now houses a bar, restaurant and function centre and, with nearly 150 years as a landmark building in Newcastle, is a great way to tap into the city’s history. 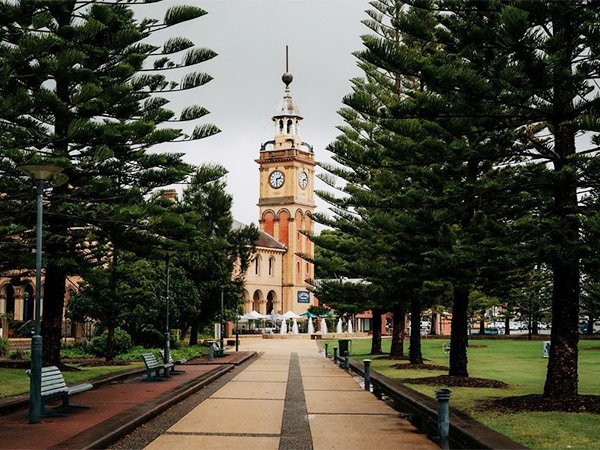 The Customs House building is a historical artefact of Newcastle.

The Prince of Mereweather Hotel

Pubs are as ubiquitous as seeing salty-haired surfers in Newcastle. But they’re not all created equal. The Prince of Wales, or The Prince as it’s known locally, has been a much-loved alehouse since 1876. Sink a few schooners of Old-School IPA on the breezy Balcony Bar of the newly renovated pub while watching much of Mereweather go by. 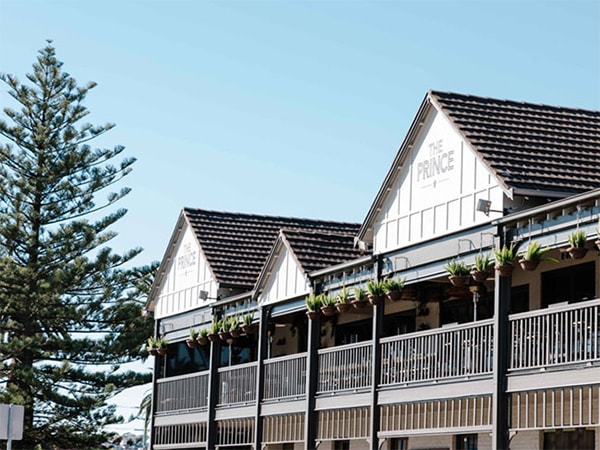 The Prince has been a much-loved alehouse since 1876.

Colourful yellow beach umbrellas, shady picnic benches, breeze blocks, communal tables, and potted plants are just a few of the reasons to plonk yourself down in the courtyard at The Bennett. The newly renovated pub is regarded as one of the reasons the suburb of Hamilton is so hot. Oh, and they stock a selection of locally brewed beers and Hunter Valley wines. 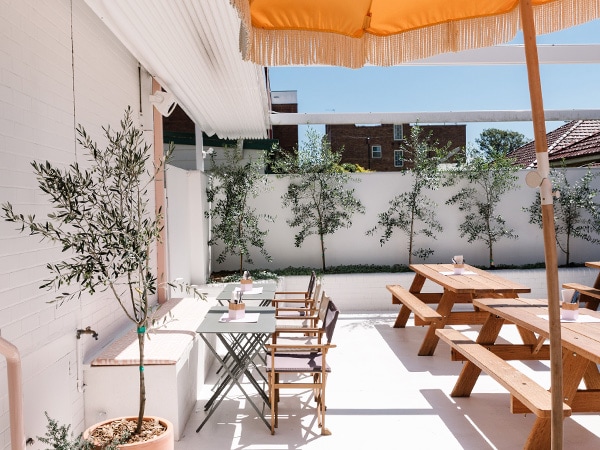 Hamilton is now hot thanks to The Bennett.

No guide to Newcastle’s pubs would be complete without a mention of The Great Northern Hotel. Despite being built in 1864, renovated in 1906 and rebuilt in the 1920s, the now Art Deco-style pub has stood its ground and is a smart space that serves classic pub grub and a varied selection of beers, wines and spirits. Lovers of live music are also well catered for. 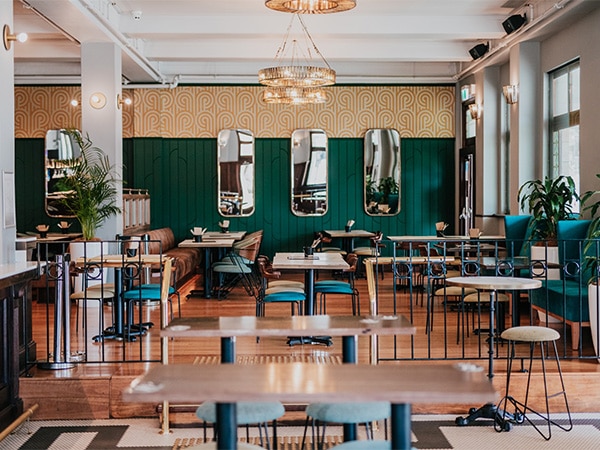 The now Art Deco-style pub has stood its ground over time.

The Burwood Inn is the sort of old-school pub where you can buy a few raffle tickets for a meat tray, gather with your mates to watch the footy, and enjoy a few ales in the smart courtyard where all the action is on a sunny day. The Merewether inn is heaven for carnivores: think rumps, sirloins, scotch fillets and rib eyes and has a well thought-out drinks list.

Look out for the pots of cascading greenery outside The Greenroof Hotel in Hamilton, an old-timer’s pub that has had a mini makeover that extends to its menu. The Greeny is a favourite place to gather for off-duty bartenders on Hospo Nights and it’s just as a pub should be in the front room on a Friday, which is a friendly and unpretentious place for a gatho. 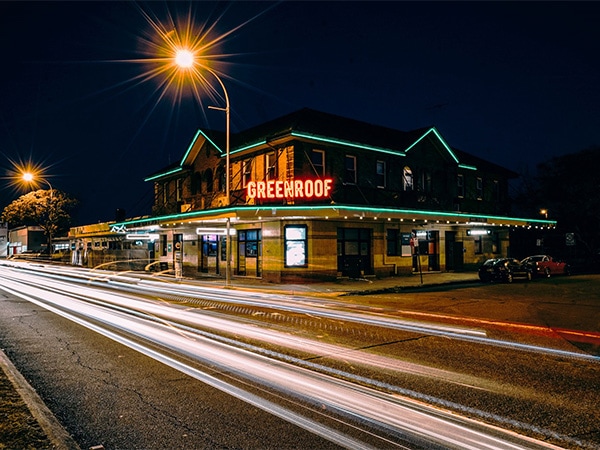 In addition to its large, wrap-around bar, The Cricketers Arms in Cooks Hill has one of the best beer gardens in Newcastle. And the cricket-themed menu knocks it out of the park with offering such as the Bradman of Schnitzels paired with a premium selection of beer and other beverages.

Corey and Kristy Crooks are credited with kicking off the craft beer revolution in Newcastle. After transforming The Albion into Australia’s first 100 per cent craft beer venue, the husband-and-wife team built The Grain Store, which has been feeding and watering Novocastrians since 2013. All up there are 21 taps of independently owned Aussie craft beer and cider for sale. 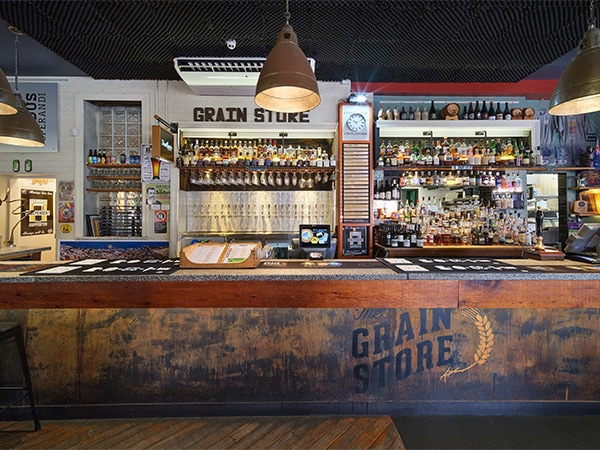 The Grain Store is credited with kicking off the craft beer revolution in Newcastle.

Behind the faithfully restored façade of this once hidden-away old CBD pub, built in the 1800s, is a cosy enclosed courtyard festooned with lights and greenery. The Lucky, which was previously The Lucky Country Hotel, is full of quirky design touches from brothel-red velvet banquettes to drum-kit chandeliers. 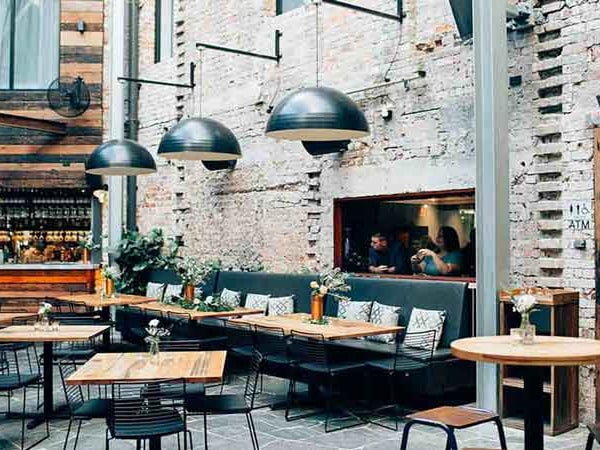 The Lucky is full of quirky design touches.

The Foghorn Brewhouse is the contemporary equivalent of an alehouse, serving a selection of beers from its restored factory floor that travels straight from the brewery to the gleaming 1800-litre tanks. Embark on a brewery tour around the Art Deco warehouse to learn about the grain-to-glass brewing process at Foghorn Brewhouse. 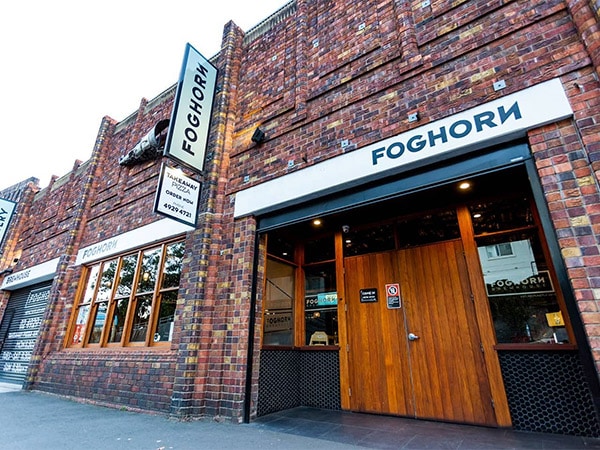 The Foghorn Brewhouse is the contemporary equivalent of an alehouse.

Step inside the dimly lit Rogue Scholar Brewing and bar venue and you’ll find it’s as much about the music and open-mic nights as the beer. Grab a pie and an amber ale at the swill house in Newcastle West where the walls are plastered with a hotchpotch of classic concert posters and there are 12 taps and four hand pumps on rotation.

Styx Brewery was established in an old coal-testing facility in Carrington and is named after the creek that leads to the old gasworks in Newcastle. The small-batch brewery sold its first keg in 2018 and today produces two core beers, an IPA and Pale Ale without preservatives or additives. Crack open a few cans during a tasting at the brewery (by appointment only).

Australian Traveller readers search ‘Newcastle Pubs’ on Google about 5000 times per month, so we know this is a popular topic. Still thirsty to find the best bars and pubs in Newcastle? We recommend all-rounders such as The Exchange, The Junction Hotel, where you can eat, drink and sleep, Young Street Hotel, which gets top billing for its beer garden, and Maryville Tavern, which is much-loved by locals. 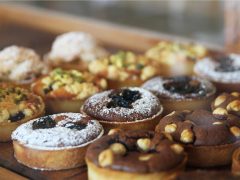 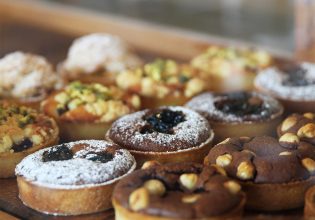 The best cafes in Newcastle

While road-trippers might have once passed through Newcastle on their way to enjoy lunch in the Hunter Valley, the city is now seen as a vibrant food ... 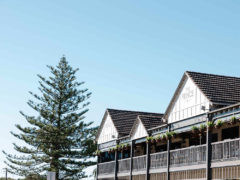 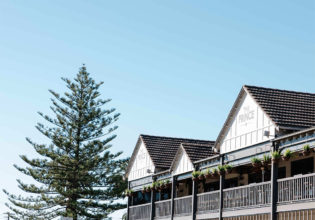 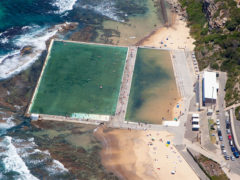 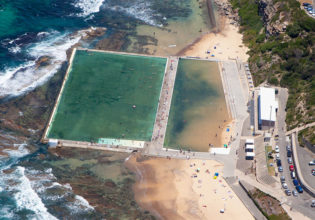