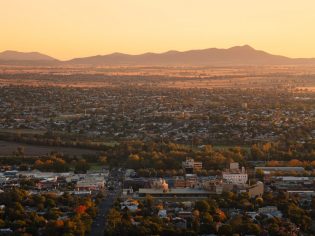 A road trip to Queensland is a New South Welshmen must-do. But for some, the well-beaten Pacific Highway is more of an over-do.

Here, we quit the coast and veer inland to uncover the New England Tablelands in northwest NSW, on route to the border. The difference in kilometres isn’t much more than the coastal alternative (about another 200 kilometres), but we suggest adding a few more days to the itinerary to really check out the scenery. Here are 10 reasons you didn’t know to take the inland route:

The region covers thousands of square kilometres, meaning the towns are fairly spread out, but it’s a picturesque patch of the state that gives way to some beautiful country drives. The landscape is largely made of expansive plains, home to cotton crops (particularly around Narrabri), paddocks of grazing cattle and occasional olive groves and vineyards. But out of the flat erupts a dramatic mountain range (the western foothills of the Great Diving Range to be exact), which creates a stunning backdrop to the area. Towards Inverell and Bingara, the landscape changes again with increasingly hilly outlooks and winding roads. So as a word of warning, it can be difficult to keep your eyes on the road with these passing views– don’t say we didn’t warn you! 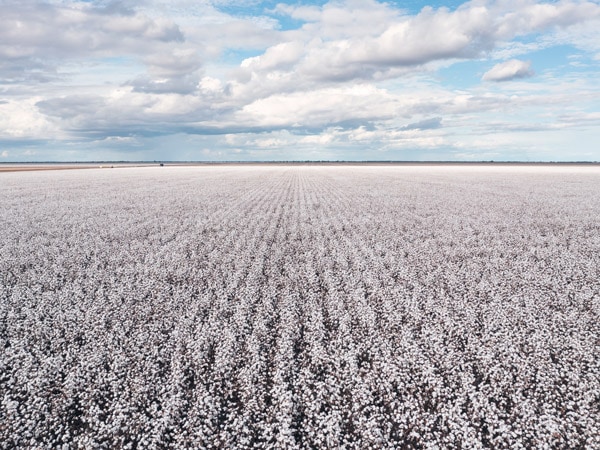 Moree has been dubbed The Spa Capital of Australia, with its ancient, mineral-rich artesian waters. This naturally heated (usually 38-40 degrees) and filtered water is said to have many healing properties and is a major tourist attraction. 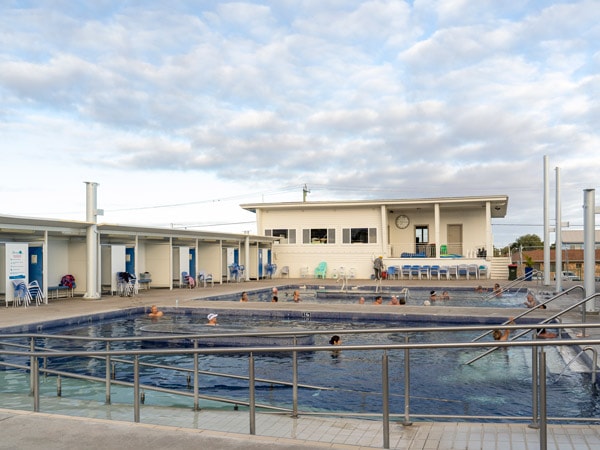 The Moree Artesian Aquatic Centre is one of the town’s main attractions. (Image: DNSW)

The best place to experience it is at the Moree Artesian Aquatics Centre (MAAC). It houses a range of public pools including two hot artesian pools – ideal for its hydrotherapy and aqua aerobics classes, as well as smaller splash areas and a waterslide for little ones. 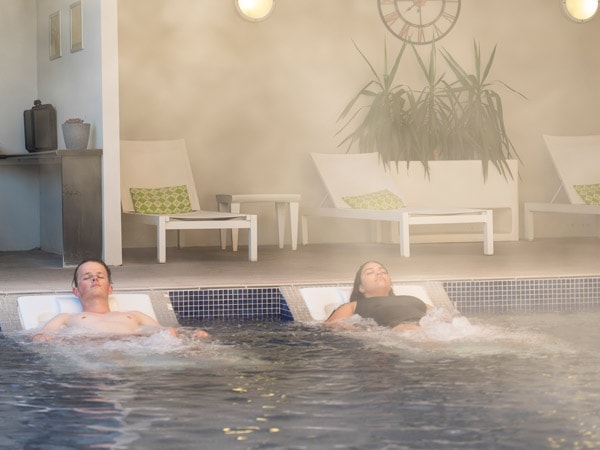 While there are plenty of hotel, motel and camping options throughout the region, we suggest booking in at one of the area’s beautiful heritage guesthouses. Our picks: Craigdon Guesthouse and Blair Athol Estate. The former, perched on the foothills of Killarney Gap, overlooking the Namoi Valley, was built in 1905 and boasts sprawling verandas, high ceilings and cosy open fireplaces – reflective of the time. The seven thoughtfully-restored guest bedrooms come with king-sized beds and ensuites, while hearty dinners and fresh breakfasts are also provided. 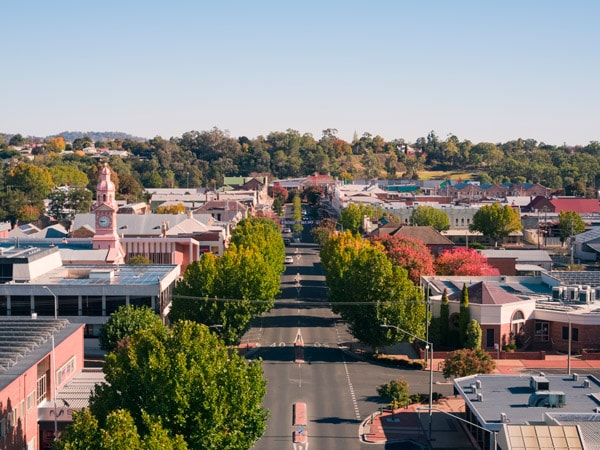 Meanwhile, Blair Athol Estate can be found tucked away on the outskirts of Inverell. An imposing manor house which was built in 1904, it’s surrounded by large, manicured gardens, while inside is eight well-appointed bedrooms, from the Bridal Suite to the Maid’s Room. Again, guests can expect hearty country breakfasts and sumptuous dinners if requested. Both are ideal hideaways to snuggle up in.

Tamworth’s Country Music Festival may be the region’s flagship event, but there are more and more get-togethers filling New England’s annual calendar, meaning more and more reasons to visit. 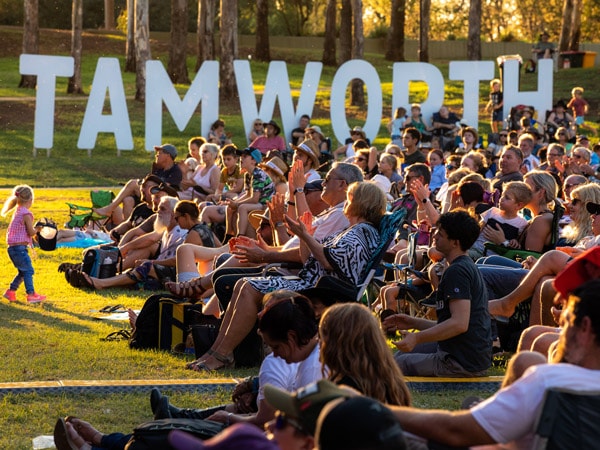 Among them are Nosh Narrabri and Moree on a Plate – both showcasing local produce, and the Australian Celtic Festival (Glen Innes), celebrating the district’s Celtic ties. The whole family will enjoy the Moree on a Plate festival. (Image: DNSW)

This brings me to my next point – the local produce itself. The fertile black soil found throughout much of the area (especially in the Gwydir Valley) is gold for agriculture; producing wheat, cereal and beef cattle. But there are also some unexpected gourmet gems to stop in at along the way. Among them is Olives of Beaulieu outside of Inverell; a small family-run business that produces olives, olive oil, dukkah and harissa, while Stahmann Trawalla Pecan Nut Farm in Moree produces 95 percent of Australia’s pecan crop and is the largest orchard in the southern hemisphere. There are some great little wineries too, including Boorolong Road Estate in Armidale. Inverell is a renowned sapphire-mining area, and you can fossick for your own gem at a number of local locations. Billabong Blue Fossicking Park on Swan Brook Creek is a great spot for any inexperienced fossicker, as everything is provided along with full tuition. It’s a similar deal at 7 Oaks Fossicking Property – 20 kilometres from town. Otherwise, check out the Billabong Blue Sapphires office next to the visitor information centre. Here you can not only purchase your own local sapphire, but watch them being cut, polished and ask any questions.

Bringing back a slice of 1950s charm to Bingara is the Roxy Theatre and Café. Originally built in 1936 by three local Greek men, it operated as a cinema until 1958, after which it was closed and lay dormant and untouched for 40 years. In 2004 the beautiful art-deco theatre was returned to its former glory and re-opened to the public as a cinema and theatre house. More recently, the property’s adjoining Greek cafe was fully restored now also includes the ‘Museum of Greek settlement in Country Australia’. History buffs, film fiends and art-deco lovers ought to swing by.

There’s quite the artistic hub here, with many little pockets to see the handiwork of local artists. Among them is Pilliga Pottery, which not only stocks a litany of beautiful, hand-made terracotta pieces, but also runs pottery classes, as well as the quirky Ceramic Break Sculpture Park, with bronze sculptures, indoor galleries and, er, resident ostriches. Inverell Art Gallery is also worth a visit, featuring regular exhibitions by both local and visiting artists as well as one of the longest continuing mosaics in Australia. 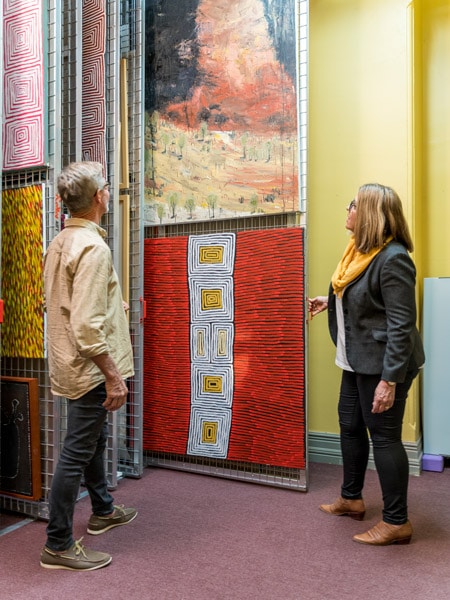 The Bank Art Museum Moree (or BAMM) is housed within a striking 1911 Federation era bank building in the centre of town and is one of a burgeoning number of regional art galleries showcasing an impressive schedule of changing exhibitions and community art classes. 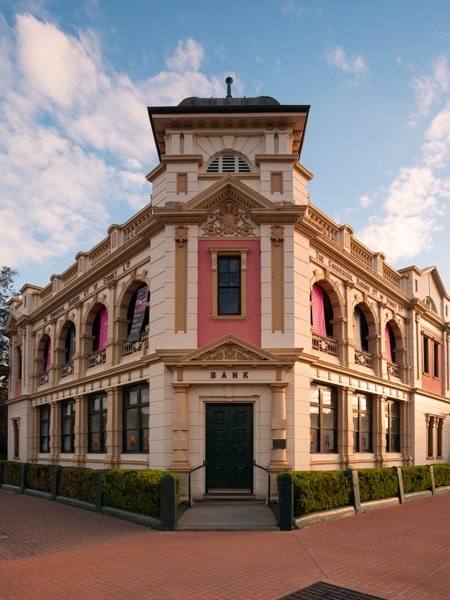 While Moree boasts the ‘Spa Capital’ title, Gunnedah is the ‘Koala Capital of the World’. With one of the largest and healthiest koala populations west of the Great Divide, you can expect to see them regularly sleeping in the local eucalypts, or even sauntering across the main road.

There are many beautiful national parks throughout the New England North West region, each with plenty of camping areas, hikes and scenic spots to explore. Among the must-sees however is Sawn Rocks in Mount Kaputar National Park, near Narrabri. Resembling an almighty wall of organ pipes, Sawn Rocks is in fact a wall of pentagonal basalt pipes, evidencing the area’s volcanic past. This unusual phenomenon is said to have been caused by the cooling of molten rock, allowing individual crystals within the rock to align perfectly with each other. Yarrie Lake, also near Narrabri also has an interesting history. Perfectly circular, this dish-shaped body of water is believed to have been formed by a meteor falling to earth millions of years ago. Today, it’s a popular place for bird-watchers, swimmers, campers and picnickers.