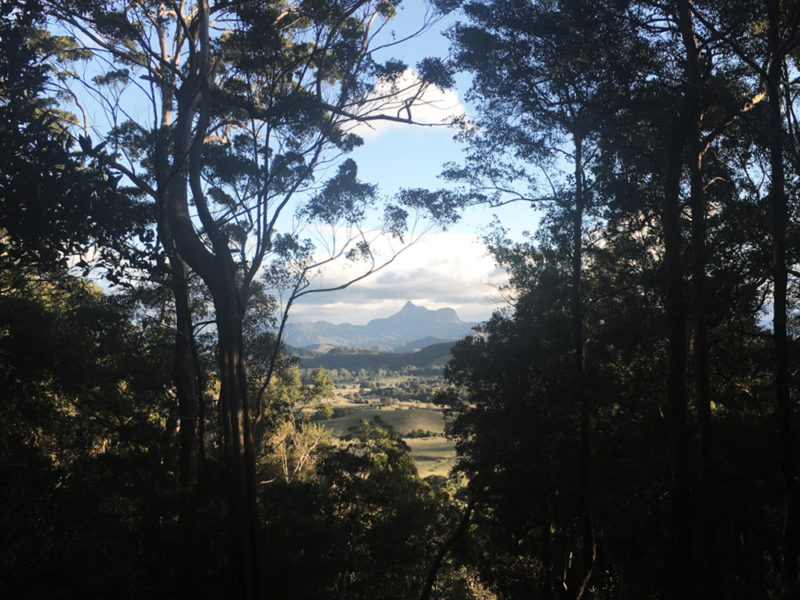 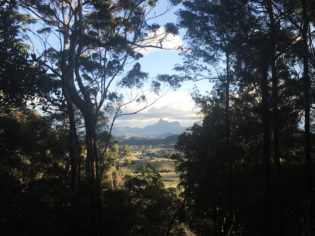 With a secluded retreat designed for maximum relaxation, a fantastic regional art gallery and next-level produce enriched by volcanic soil, the picturesque northern NSW region known as the Tweed deserves your attention.

The Tweed, as it’s affectionately known by locals, is an area on the NSW north coast that encompasses Murwillumbah, Kingscliff and Burringbar, and is fast becoming a hot new foodie destination. Situated between Byron Bay and the Gold Coast, the area has long been a pit-stop on the way to one of the glossier destinations, however now the Tweed is a hotspot in its own right. Host to a variety food producers and creatives, the region is fast becoming a known for its high quality produce and burgeoning food scene. The landscape rivals its counterparts, with the non-volcanic Mount Warning as a constant companion.

Just 20 minutes from Gold Coast airport, the town of Murwillumbah is the central hub of the Tweed. I soon learn, everywhere is “just 20 minutes away” which does make exploring the region easy. In April 2017, Murwillumbah and surrounds were devastated by floods that destroyed many homes. Driving through to area to our accommodation, you would barely know it had been affected. Aside from an unusual amount of roadworks, the region looks as lush and green as it always has.

As happens after many crises, the 2017 floods have made the Tweed community stronger and more determined to showcase its wares to the world. This steely resolve is evident in the food, produce, coffee and accommodation – the Tweed locals are a fiercely proud bunch. And with good reason: the produce coming out of this region is next level, and the awards and hatted restaurants received in recent years prove it. Its secret? According to the locals, it’s the soil. Set amongst volcanic earth, the soil is rich and diverse, and the Tweed is making the most of it. Here’s how you can too.

Nestled amongst the tree tops

We make our way up a steep and windy road and – arriving at Mistere Spa and Retreat, set up high in Urliup 10 minutes from the centre of Murwillumbah – hear… nothing. Silence. Air. Relaxing in record time is easy here; civilisation feels so far away.

Mistere, named after the continual mist that sits on Mount Warning, features three self-contained luxury villas nestled high among the trees, surrounding a lake and alongside a waterfall. You can’t help but relax here; a sculptural fountain in the main lake feels like a meditation tape on repeat. The aim here is to disconnect. Done.

Each villa features a kitchen, views either out to Mount Warning or overlooking the lake, and all the comforts of a luxury hotel. The several sculptures on the 50-hectare property add an air of mystery to the already serene environment, and each villa is completely private – making it very easy to switch off from everything.

Build a gallery and they will come

Producer Gerard ‘Buck’ Buchanan from Buck’s Farm was the first in Australia to harvest finger limes native to the land he has run for 40 years. His finger limes and other exotic products such as aniseed myrtle and Japanese Yuzu fruit, service the restaurants in the area, such as Paper Daisy at Cabarita Beach; the farm even supplied renowned Noma chef René Redzepi on his last visit to Australia. A visit to his farm is like an outdoor museum of exotic fruits.

Other places to visit for produce include Tropical Fruit World, where you can see and taste over 500 varietals of exotic fruits from around the world and the Murrwillymbah Farmers’ Market, open Wednesdays, which showcases the best produce from the region; allowing you to sample it and meet the producers.

Burringbar, a town south-east of Murwillumbah may be small in size but is big on flavour. The area incorporates a tea dispensary and cafe, Fallen Leaf, which has an onsite practising herbalist, Ash Hill. Ramble around Heaths Old Wares, a rabbit warren of eclectic vintage pieces that regularly services the film industry and many a stylist. Nearby is Tweed Valley Whey Farmhouse Cheeses, a small family-owned artisanal dairy farm; stop off for a tasting whilst admiring the 100-plus herd of cows.

Let someone do the driving

Take a full-day tour of Tweed’s historic villages with Mount Warning Tours, stopping Uki and Tumbulgum. Pop into the Art Post Uki, a working post office and newsagency that also features a coffee house run by the post (and coffee) master Garry Wall and a small art gallery run by local artist Susan Kinneally. Have a peek at the pink coffee roaster out the back, she is pretty.

The tour will also take you to the charming town of Tyalgum; stop in at Flutterbies Cottage Cafe for a nostalgic step back in time. A few doors down, the heritage-listed Tyalgum Community Hall hosts a selection of concerts, plays and musicals during the year including the Tyalgum Music Festival each September. Visit tyalgumfestival.com.au