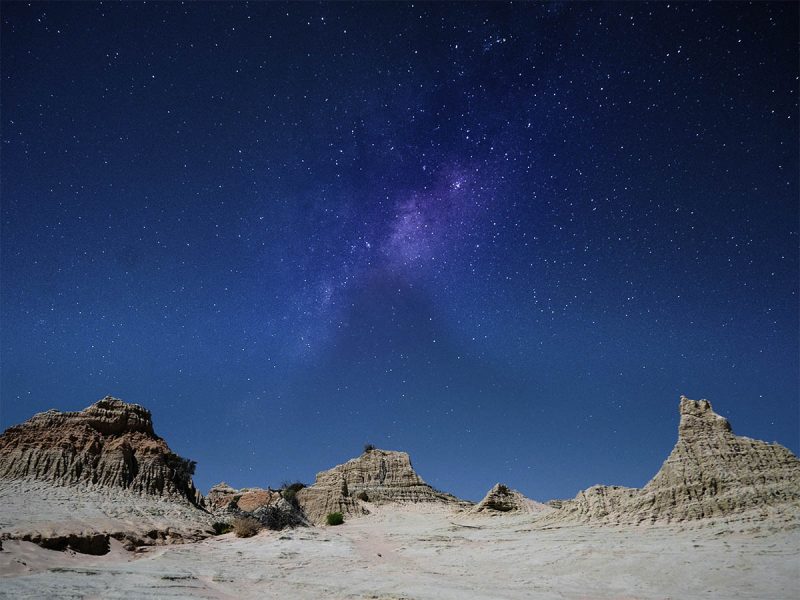 The ancient landscapes here must be seen to be believed, but they are just the beginning of what makes this outback NSW national park one of Australia’s most extraordinary.

How many national parks on Earth have been described as harbouring a bookend of humanity? Not many, we’d wager, but then Mungo National Park is like nowhere else you’ve ever been.

Located 875 kilometres west of Sydney (take the epic Darling River Run if you have a few days to spare), its moon-like landscapes are stark and surreal, immense and magical. And its history is staggering. This is a place where megafauna once roamed that lays claim to the oldest collection of fossilised footprints ever uncovered. Then there’s the archaeological discoveries that rewrote history in the late 1960s and ’70s: dated to around 42,000 years old, Mungo Man and Mungo Lady proved – scientifically – that Aboriginal culture has existed here since time immemorial, and represent the oldest known examples of ritual burials in the world. 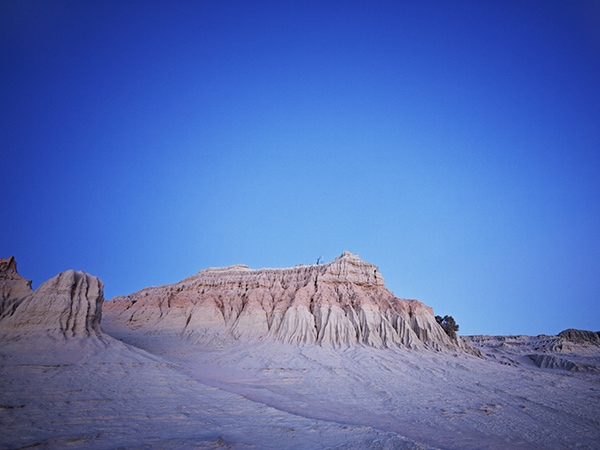 Lake Mungo is one of 17 dried lake beds within the World Heritage-listed Willandra Lakes Region. About 50,000 years ago, it held a vast amount of water but has long since fossilised, leaving eroding sand dunes to reveal evidence of an area once thriving with prehistoric life; it was here in the layers of sediment that the seminal Mungo Man and Mungo Lady discoveries were made.

Arcing around the eastern edge of the lake, the Walls of China is Mungo’s star attraction. A low curve of sandy hills, or lunette, whose wrinkled clay pinnacles rise up out of the earth like strange bonsai mountains, this hypnotic outback landscape has been sculpted by millennia of sand-soaked winds. Stroll the boardwalk or go further with an NPWS Aboriginal ranger. 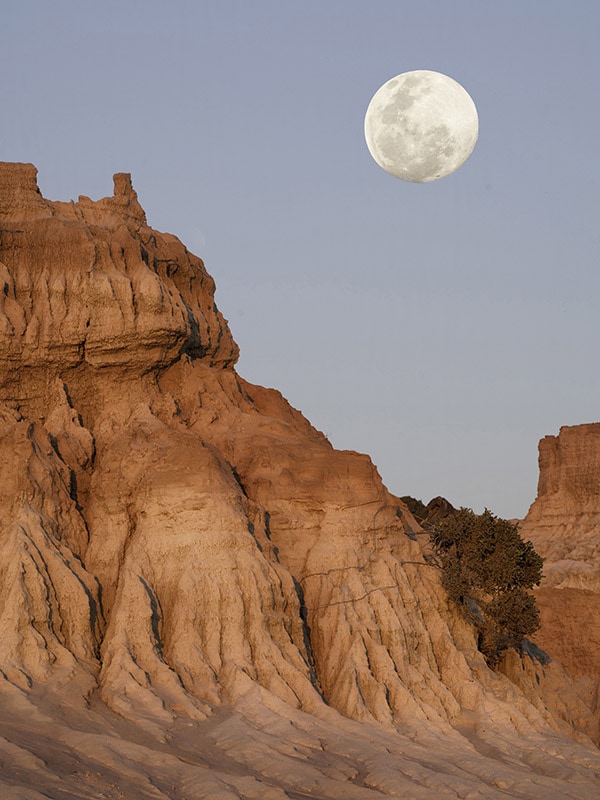 Moon rising over the Walls of China in World Heritage Mungo National Park.

Built in 1869 using an ingenious drop-log cypress pine construction, this historic woolshed harks back to when Gol Gol pastoral station brought thousands of sheep to the region. The farming activity on this dramatic but delicate landscape revealed the secrets of the ancient lake bed.

Head to Red Top Lookout in time for sunset for unparalleled views over the remarkable Mungo landscape as the fading light renders its tapestry of deep ravines, patterns and textures all shades and colours, and the sky – with its huge moon rising – turns practically psychedelic. 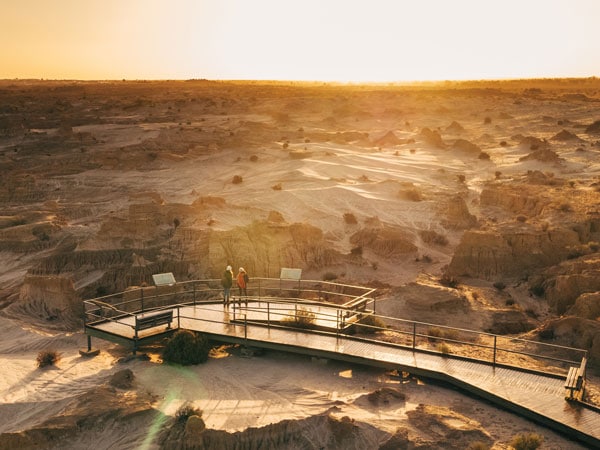 The best way to get under the skin of Mungo is with a ranger who represents one of the three Traditional Owner groups of the region: the Paakantji, Ngiyampaa or Mutthi Mutthi. Booking a NPWS Aboriginal Discovery Guide will see you exploring a sensitive area beyond the Walls of China boardwalk, hearing fascinating Dreamtime stories and more.

Get acquainted with this awe-inspiring desert landscape by driving, or better yet, cycling the 70-kilometre Mungo Loop Track. Crossing the ancient lake bed to the Walls of China before tracing its shores, this route linking Mungo’s highlights takes in the iconic dunes and mallee country of outback NSW. Stop for a picnic lunch at any one of the lookouts along the way. 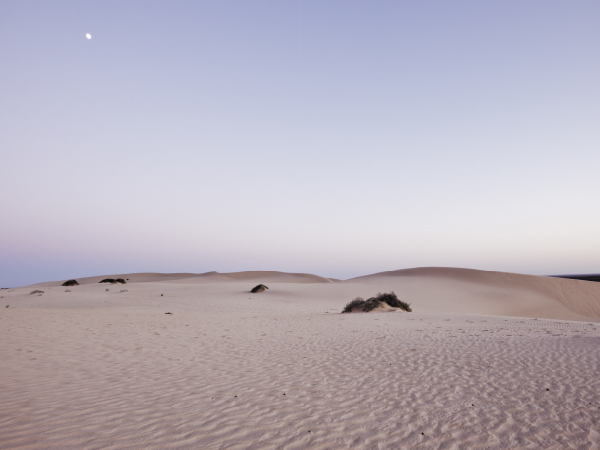 Another cloudless sunset brings depth to the dunes near Vigars Well, accessed by the Mungo Loop Track.

Cycling this 10-kilometre route, or treating it as a half-day ramble, provides a glimpse into the pastoral history of the Mungo region. Starting at Mungo Visitor Centre, you’ll pass by dunes under wide open skies – watching out for birds and other wildlife along the way – and visit the historic Zanci Homestead site, with its bric-a-brac of buildings and ruins including an old brick chimney.

Head to the Meeting Place at Mungo Visitor Centre to learn about Mungo Man and Mungo Lady. While the remains are kept private for cultural reasons, the lunette-shaped viewpoint here symbolises and commemorates their ancient resting place and that of countless Aboriginal ancestors. You’ll also see casts of fossilised human footprints found in a clay pan that date to around 20,000 years ago: the largest known collection in the world of such prehistoric footprints. 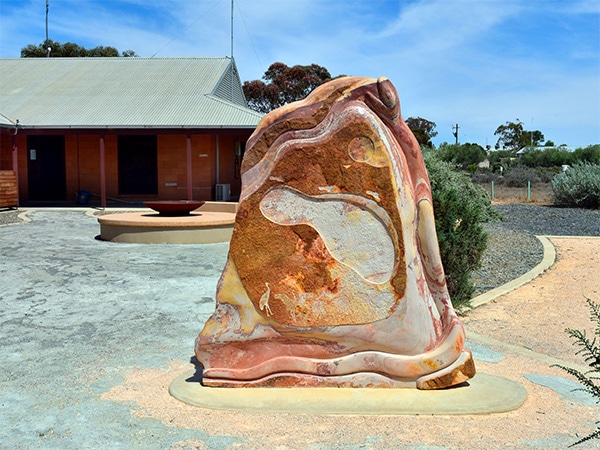 Mungo’s many colourful parrots cut a vibrant contrast against the outback landscape. Spot the mulga parrot, otherwise known as the many-coloured parrot, in all its primary shades; the aptly named rainbow lorikeet; and the mallee ringneck, pictured – with blue and green plumage and a red forehead, it wears a golden ring around its neck like a scarf.

You don’t need to be an avid birdwatcher to find yourself thrilled to catch a glimpse of this delightful creature, also known as Major Mitchell’s Cockatoo. Mungo National Park is one of the best places to see these Battenberg cake-coloured cockatoos, with their flamboyant pink, orange and yellow crests; at times they can be seen in their hundreds, especially when coming in for the night to roost. 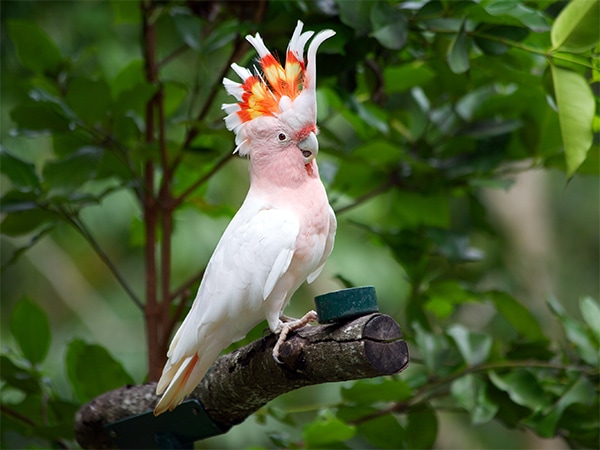 Look out for the pink cockatoo.

OK, so you’ll have to use your imagination for this one; the Willandra Lakes Region was once a prime megafauna stomping ground. Evidence of which – from the wombat-like diprotodon, pictured, to the short-faced giant kangaroo, or procoptodon – has been found buried in Mungo’s sediment. Squint and imagine these fantastic beasts roaming the land back when Lake Mungo was in full flood some 50,000 years ago, during the Pleistocene Epoch.

The red kangaroo is not only one of Australia’s most iconic animals, but also the largest marsupial in the world. And Mungo is a prime place to spot a mob or few, almost camouflaged by the landscape.

Getting to Mungo national park

The closest major centre to Mungo National Park is Mildura, between two and three hours’ drive. Whichever way you drive, you will inevitably encounter unsealed roads that are usually in good condition. Always check road conditions and carry adequate food and water.

Guided walks around the Walls of China with NSW National Parks and Wildlife Indigenous rangers can be arranged at the Mungo Visitor Centre (July through October).There are a variety of tours that also cover the wider park, such as Balranald-based Outback Geo Adventures.

Mungo Lodge is about 15 minutes’ drive from the Mungo Visitor Centre. On a sprawling 77-hectare property, the lodge is well appointed with large rooms, a restaurant and a cosy bar area.