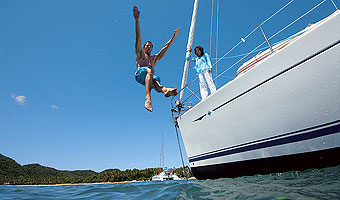 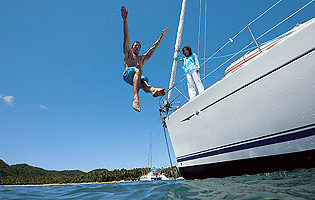 Beginning at Townsville and spilling northwards beyond Cape York into Torres Strait, the emphasis in the northern reaches is on the vast range of experiences, with everything from five star celebrity hangouts to deserted Robinson Crusoe-style outposts. The choice is yours.  By Fiona Harper

The sickly sweet scent of frangipani permeates the air as you venture further north on your Marine Park journey. As the temperature increases, so too do the heady sun-infused aromas wafting from the forests, jungles and gardens of Tropical North Queensland. Seasoned sailors will say they can determine how far offshore they are by the land smells that waft out across the waves.

While that may be true, and indeed some of the northern delights, like Flinders Reef, are so far offshore that you almost need a passport to get there, others like the Low Isles are just a few kilometres from land. The favoured destination of adrenalin-seeking game fishermen and hardcore scuba devotees for the deep water and unpolluted reefs that run inside the Continental Shelf, this region is also the haunt of languid sunworshippers aiming for nothing more strenuous than an easy snorkel off the beach of a deserted coral cay. The northern region is a delightful jumble of sun, sand and sea that just gets more interesting the further north you venture.

So how to find your chosen piece of paradise? You could fly into Townsville, which will give you immediate access to Magnetic Island and the Palm Group. Alternatively, hop in a car and drive north from Townsville, passing through Cardwell (with access to Hinchinbrook Island) and Mission Beach (departure point for Dunk and Bedarra Islands) before you come to Cairns, the gateway to nirvana for reef and tropical island worshippers.

Or you could fly straight into Cairns and feel the soft sand of a deserted island slipping through your toes within hours of touching down. There are enough cruise options from Cairns to satisfy the most jaded holidaymaker. From small friendly sundowner cruises to purpose-built dive boats that lurk so far offshore the only way to get there is by helicopter, the choices are phenomenal. Green, Fitzroy and the Frankland Islands are just a short boat ride away. Permanently moored pontoons provide an easy, if somewhat generic, reef experience at Moore and Norman Reefs, but there are plenty of more personalised cruises exploring offshore reefs where humans are well outnumbered by the wildlife.

Another option is to get on the road again from Cairns and drive north for an hour to Port Douglas on one of the best coastal rainforest drives around, the Captain Cook Highway. Stopping in for a latte or lunch at heavenly Palm Cove is almost mandatory for those who like to boast of rubbing shoulders with the rich and famous once they get back home. Intimate Double Island Resort is so close you can almost hear the crystal glasses tinkling.

Enchanting Port Douglas has well and truly awoken from its “sleepy little village” slumber and rivals Cairns as a major departure point for Marine Park cruises. Though it retains its village charm (for now), it’s a sophisticated waterfront town whose star is on the rise. Most of its best restaurants have settled on the winning formula of outdoor dining beneath breeze-rustled palms, serving culinary treats created from a bounty of fresh local produce.

Further north still, the wilderness of Cape York begins soon after leaving Port behind, as you head into mountainous, heavily forested Cape Tribulation and beyond to Cooktown. The bitumen road terminates at Cooktown, meaning that if you don’t have a 4WD or access to a boat, you’ll go no further. If you want to explore the Marine Park north of Cooktown, you’ll need to backtrack and board a vessel from Cairns or Port Douglas.

Back to the Ultimate Guide to the Great Barrier Reef