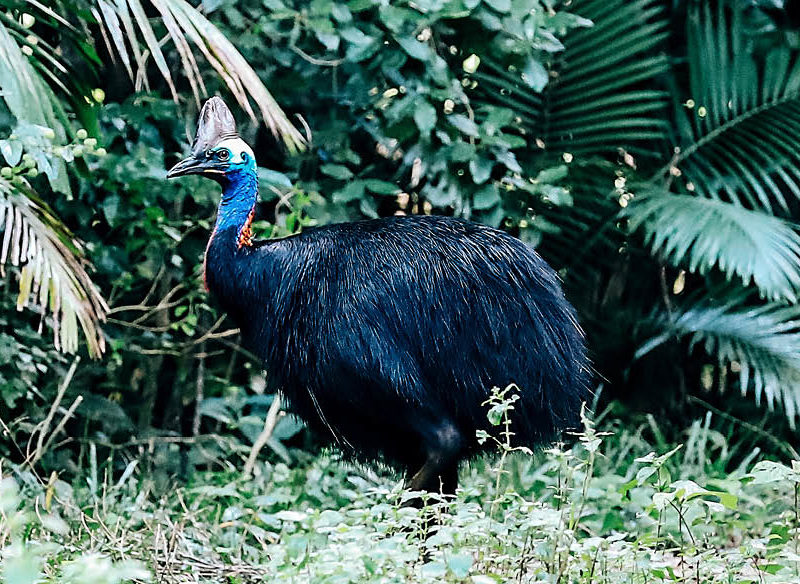 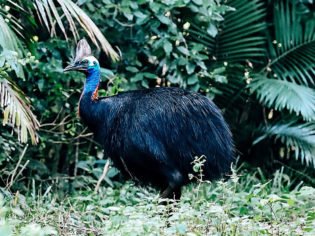 Steve Madgwick goes cross country, tip diving – and just a little crazy – in pursuit of Mission Beach’s most elusive residents, the chimerical cassowary. Did he find one?

I should have just gone to bloody Mitre 10 or the tip, like a landslide of locals told me to do. Instead, blood oozes from my lacerated right earlobe, after a tangle with some lawyer cane (a.k.a. Hairy Mary), a particularly vindictive spiky climbing palm endemic to Far North Queensland.

“Get them off, get them off me now!” shrieks photographer Elise, followed by an unrepeatable medieval curse damning leeches past and present to a torturous and heinous afterlife. A scarlet rivulet flows down her ankle as the tropical-strength rains wash it onto the rainforest floor. I panic-swipe off a leech from my own ankle, seconds before it uncorks me too. OK, time to exit, stage left; if I only knew where the exit was.

“Grab a coffee, wait outside the hardware store, you’ll see one,” they had said. “Be patient.” But with a paltry 36 hours to spot a cassowary in the wild, clearly I can’t wait for one to come to me. No, I must go to meet the cassowary, that chimerical flightless rainforest resident, a mad sketching from a rubber room incarnate.

But it feels like I’ve trudged five kilometres in the wrong direction so far; the traffic din is long gone now. At least I’ve come prepared: got my hiking thongs on and there’s three sips of double-shot latte left in my takeaway cup which, if needed, I guess I could use to collect rainwater.

Three-pronged T-Rex-esque footprints stamped deep into mud near the trailhead transformed “just a look” into this blinkered, unrelenting quest. Snapped branches were the next calling card; apparently a cassowary will karate-kick down a tree when its sugar craving goes nuclear.

Then consistent mounds of fresh, personality-filled droppings, speckled with barely digested quandongs and Davidson plums, which these birds hoover up like M&M’s at a kids’ party. Even the untrained eye can see that this is VIP (Very Important Poo), a vehicle to distribute the seeds needed for rainforest regeneration, making the cassowary a ‘keystone’ species.

Next, there should be a low grumbling grunt; a peculiar concertina drumming din, like a bagpipe breathing. But all I hear is anonymous rustles and a tropical birdsong operetta chorused by sharp whoops and whistles. Which is soon drowned out by the exasperating whoosh of car tyres from the inadvertently re-discovered road.

Back at the trailhead, I wave to the road engineer, yet another local who had fertilised my cassowary fixation with his fantastic tales.

“I’ve seen the same big bugger cross here three times already this week,” he had said an hour ago, as we considered whether to walk the trail. To be fair, he’d clearly qualified his statement with “you might be waiting a week because they’re shy little fellas”. But all I heard from the quiet place of my mania was “cassowary… blah-dy, blah, blah.”

The road widening he’s working on along this stretch of rainforest-splitting thoroughfare, which funnels traffic in from the Bruce Highway to Mission Beach, is cassowary-specific. In 2016, around 15 of them were mowed down and killed along El Arish Mission Beach Road by drivers who often simply neglected to take their hoof off the gas, despite the numerous and varied big yellow signs imploring them to do so.

Regrettably, cassowaries aren’t from the ‘look to the left, look to the right’ school of crossing; they stomp up and down the same narrow pathways every day, with scant concept that one tonne of steel can possibly harm them. A wider road means more chance for drivers to spot the birds as they make their dash.

In the courtyard of Bingil Bay Cafe to Mission’s north, I seek the counsel of local resident Liz Gallie. The artist-cum-cassowary conservationist has a profound affinity, borderline obsession, with the bird and its hangout, the Djiru National Park, which embraces the Mission Beach landscape like a warm hug from your mum when you most need it.

Liz fashions wearable art out of precious metals and lawyer cane, her wares part of a procession of arts, crafts and oddities for sale at Helen Wiltshire Gallery in Mission Beach’s charming Village Green. She’s even painted a tribute mural to her favourite feathered-friend on a local library wall.

“We don’t want people to come to Mission Beach expecting to see a cassowary immediately,” she says. I dodge eye contact, momentarily. “We want people to slow down; on the highway and when they get here, too. These are intensely private and territorial animals so everyone just needs to give them space!”

How territorial? A fibreglass cassowary tribute at the information centre was brusquely booted off its stand (and broken) by a strong-minded female defending her ’hood. They’re also known to preen themselves “violently” come mating season.

Out in the forest, they stay on the watercourse, wandering from fruiting tree to fruiting tree. “But, as you’ve found out, it can be infuriatingly hard to see them,” says Liz. “Their colours dissolve into the undergrowth; they become the rainforest.”

She estimates there to be 100 cassowaries in the area. Locals like to name their favourites, such as Cyrilina and Juve, who often hang out near Liz’s tree-house-like home studio. Initially, everyone thought Cyrilina was a Cyril, because it’s difficult to discern males from females before sexual maturity.

After this, however, females categorically rule the roost, outgrowing and utterly dominating their diminutive male ‘partners’ (yes, plural). Like fellow ratite the emu, a cassowary woman plays the field (well, rainforest), leaving Dad to teach the newborn chicks fundamental life lessons and skills, such as food sourcing, before she ‘requires’ him again next season.

The seemingly anodyne act of hand-feeding a cassowary (which a palpable number of locals and tourists apparently still do) upsets this natural order. A fed bird is a dead bird, so the saying goes; the opportunistic, think-with-their-belly creatures then see humans as their primary meal ticket, meaning the next-gen may stray away from their natural paths to where the tastier grub is. Consequently, in theory, Mission’s magnificent rainforest could be starved of the fertiliser that it needs to exist.

Slowly encroaching development has already transformed the cassowary into more of an urban dweller by default, which is why the bush outside the town’s Mitre 10 is a sighting hotspot, along with the grounds of a caravan park at South Mission Beach. And, as Liz grudgingly confirms, you’re just as likely to catch a glimpse of them at the local tip, too.

Predictably, a couple of impatient fly-bys past said hardware store bears no birds so I head south to the Beachcomber Coconut Holiday Park. A cassowaric cult unfolds during the 10-minute drive through suburban Cassowary Coast. Outside a Wongaling Beach shopping centre, a five-metre tall cassowary ‘big thing’ stares feverishly into the middle distance. I pass by Cassowary Drive and signs that taunt ‘Cassowary utilise this area’. Do they really, I begin to wonder.

Yet the cassowary is a lot more than just a mascot to Mission Beach. For the area’s traditional owners, the Djiru people, the ‘gunduy’ is a divine character in their home’s story.

Yet another (life-sized) cassowary effigy teases the caravan park visitor with a beckoning, sassy, cheesy grin. The front desk clerk mechanically directs me to “the spot”, where a resolute assembly of grey nomads waits tensely near a quandong-rich creekside corridor for the pre-dusk procession.

No one seems fazed by the cassowary’s infamous superpower: an apparent ability to ‘unzip’ a foe with a blade-like spike behind their toes. “They’ll walk right up to you some days,” says a guy, part of whose job it is to drive around the park in a golf cart topped with a giant fibreglass frog.

Bryan from WA, who’s been unwinding at Beachcomber for a couple of weeks, reckons he’s seen the same pair every second night or so, yet he still exhibits first-night nerves ahead of this evening’s possibilities.

I sit down on the precisely mown grass, and sluggishly sip on a single mid-strength beer that I optimistically bought to toast my virgin sighting. The sips get smaller and smaller, like a lizard lapping a fast-evaporating puddle. And my hope evaporates along with the generic brew’s frothy dregs.

“Not today,” announces Brian, like he just got a memo from cassowary HQ. With scant daylight left, I execute a desperate act. In this idyllic Queensland town, where rainforest shakes hands with reef, with Dunk Island just a short water taxi ride away, I set course for the Mission Beach Waste Transfer Station.

A grader wrestles fridges, bikes and unrecognisable household debris into a pinnacle, but no ‘Tip Turkeys’ [copyright: Steve Madgwick] stir beyond the dust. I quiz a young boy, perhaps the grader driver’s son, if he’s seen any around today. He shakes his head, with a stranger-danger wariness that serves to underline the depths I’ve sunk to on this cassowary quest.

On the way back to the hotel, I drive at a leech’s pace, trying to suck the birds out of the bush with my eyes, and reflect on a double defeat; not only no sighting but I’ve also catastrophically failed to appreciate Mission Beach’s life-in-the-slow-lane rhythms.

Next morning, quest over, I catch sunrise over undeveloped Garners Beach, where during the day the dense tree canopy shades families who make crocodile and whale sand castles, just because that’s what families with no digital distractions like to do.

Back on the road, not far from the turn-off back to Cairns, miraculously it happens: a couple calmly walks across the road, unmoved by the rental van’s screechy halt. They look up inquisitively. Their red wattles and blue feathers radiate vividly in the post ‘golden hour’ light, making the lively green foliage look comparatively anaemic. Their bushy black feathers exude a fresh-from-the-hairdresser sparkle.

Barely a minute and they dissolve back into the road-side undergrowth. We follow on foot, indiscriminately trespassing, trying to out flank them for one more greedy glance, in which we succeed. And Elise, as usual, nails that elusive shot: the proof.

And then, as is their right, our cassowaries decide the show’s over. “It’s like losing a child in a supermarket,” Liz had told me. “If you go looking for [them], you won’t find [them], it’s only when you stop…” I consider the fact that Liz may indeed be one of them. Or at least walk among them. I would like to walk with them too.

Getting there: Mission Beach is a two-hour drive south of Cairns.

Cassowary-spotting there: Check out the Mission Beach Cassowaries Facebook page; a great resource for updates and tip-offs. For cassowary Plan B, head to Etty Bay (20 minutes’ drive south of Innisfail) to (hopefully) catch an early-morning or late-afternoon glimpse of the birds on the beach.

Eating there: For good quality grub and coffee, try Joey’s Mission Beach or Bingil Bay Cafe for home-style meals from breakfast to dinner.

Drinking there: Head to bar/restaurants Shrub or Sealevel for beach-front sundowners.

– Browse Mission Beach’s galleries and shops, such as Ibu & Bean for beachware.

– Snorkel or scuba dive the waters of the Outer Great Barrier Reef around Dunk Island with Mission Beach Dive.

– Check out heritage-listed Ninney Rise house where artist John Büsst hatched seminal save the Reef and rainforest campaigns in the ’60s and ’70s. 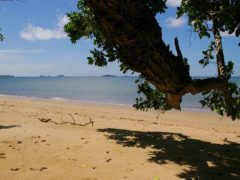 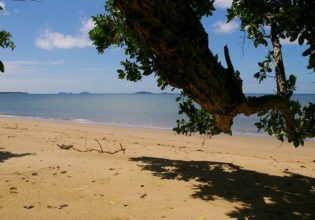 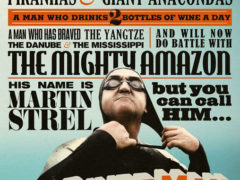 Outdoor cinemas at The Mission Beach Film festival (MBFF) will be the showing films celebrating unique stories of the natural world (more…)... 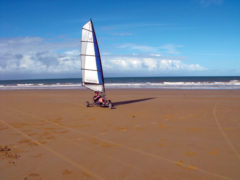 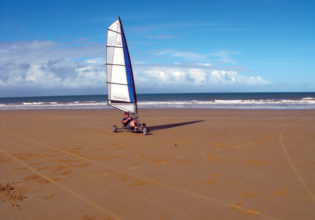 Rather than flag down a taxi on his latest far north Queensland adventure, AT Blo-hard David Whitley tries out a very different form of transport. It...