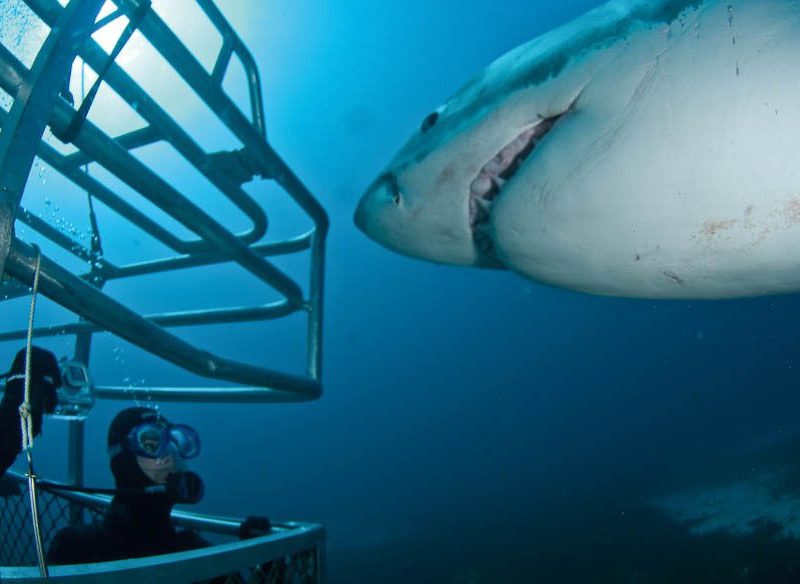 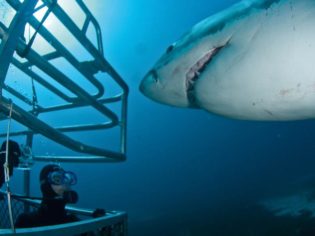 Shark diving Port Lincoln appears in as many nightmares as it does bucket lists.  Alissa Jenkins finds out that diving with great whites is confronting… but not for the reasons you’d expect.

“I tried to gouge his eyes out, which made him loosen his jaws, but as I attempted to push myself away my hand disappeared back into his mouth. Before he could bite my hand off I pulled it back, ripping it across the teeth – I received 97 stitches in that hand, with only one tendon left.”

This is the story of Rodney Fox – the South Australian spearfishing champion who was attacked by a shark in 1963, just a couple of peninsulas east of where we are now. Thanks to a thriving tuna industry and nearby seal colonies on the Neptune Islands, this area – just off Port Lincoln – is what Fox calls “the best restaurant in Australia for great whites”.

Unfortunately, he tells me this half an hour before I’m to dive into the water.

“As well as my hand, every rib in the left side of my chest got broken, my lung had been punctured and I ended up with over 500 stitches,” he adds.

Now a grey-haired grandfather, many decades have passed since Fox’s ordeal, which changed his life far beyond a patchwork of bodily scars. Even more miraculous than surviving the attack itself, Fox shook off the trauma, quit his job as a life insurance salesman, and dedicated his life to trying to understand sharks through research and filmmaking, later becoming a leading advocate to protect great whites from extinction.

“There was a saying that the best shark is a dead shark, but I didn’t really feel that way,” Fox says, twiddling his thumbs. “I mean, I wasn’t real happy with the shark that bit me, but I’d seen the ocean and how beautiful it was. I thought there’s got to be more to it than just fear, hate and killing.”

A wave of excited shouting sweeps inside from the stern. It’s out there that a steel cage is suspended from the boat, bobbing below the ocean surface, which the borderline insane climb into to come face-to-face with great whites. Inspired by a visit to the zoo shortly after his attack, Fox initially built the contraption so he could examine his attacker in relative safety.

Soon researchers and filmmakers began travelling from around the globe to experience his shark cage, including the Hollywood crew behind a little film named Jaws. Then in 1976 after growing requests from the public, Rodney Fox Shark Expeditions became the first Australian operator to take game travellers into the shark’s domain. Since then it has become a popular bucket-list experience, luring in a motley bunch from 20-something thrill-seekers and suburban mums, to celebrities like Karl Pilkington (à la An Idiot Abroad). For some ungodly reason, I’ve agreed to join them.

Now at the stern, shivering in a wetsuit, I’m the last guest to take the plunge. Almost as disconcerting as the silvery fins slicing through the water is the lack of fear in anyone else onboard. After all, these are prehistoric predators with killing abilities so finely attuned they’ve hardly changed over the last million years. I’m a rapid heartbeat away from adding to the burley that’s already luring the sharks closer.

Teetering onto the platform, quietly waging deals with the gods, Fox’s voice rings through my skull – “I remember looking down through the water, red from my blood, and seeing this big head coming towards me with those big teeth.”

Cripes, this is not what I signed up for… Alas, I bite down on the regulator (linked to an oxygen tank on board), climb onto the cage’s ladder and like a jelly-legged newborn donkey, shake my way down.

Icy water and bubbles rush around my head, which soon clear to reveal a cobalt-coloured underworld. All is silent bar the thudding heartbeat in my ears. I inch my way around the inner rail of the cage (large enough to fit four), and settle beside a window. As I try to steady my breath, shiny schools of jack mackerel and silver trevally flitter above, nibbling at the bundles of bait floating next to the cage.

Then out of the corner of my mask emerges the makings of nightmares. Over four metres long and almost as wide, he silently glides in, jaws agape, with those black deadpan eyes. I’m paralysed with fear. A regular in these parts, he’s known to crew as Scarface. No more than a metre away, he drifts past, bypassing the cage straight to the bait where he takes a chomp before slowly returning to the depths of the sea floor. I barely register as a blip on his radar.

Somehow, Fox’s claims that great whites “aren’t the menacing man-eaters that people think they are”, seems to have some validity. The flood of terror is replaced by perplexity and for the next half-an-hour I forget any paranoia and take it in – their world. It’s a bizarrely peaceful world, too. Beams of sunlight break through the water illuminating the lustrous scales of passing fish, which Scarface isn’t interested in either. He moves slowly, serenely, disappearing for minutes at a time, only re-emerging to inspect fresh bait.

I notice a tag in his side too, a device used to track his whereabouts as part of the Rodney Fox Research Foundation. Cage diving is only one arm of Fox’s legacy, now headed by his son, Andrew. The foundation, dedicated to studying migration patterns and breeding habits, is what earned the Foxes permission to regularly throw bait into the water to attract sharks – a privilege granted to only two operators in the country.

Meanwhile two bite-sized fish are swimming either side of Scarface’s nose – presumably the two most nervous fish in Australia. Later Fox explains, “it’s a symbiotic relationship they share”, where the small fish clean the shark in return for protection from larger fish. They follow Scarface around like schoolyard sidekicks, but he doesn’t seem to mind. Indeed he seems rather relaxed about the whole thing. Decidedly unlike the crazed depictions seen all too often on TV.

Not much is known about great white sharks, even today. While the world’s other great predators like lions and bears have, for the most part, been understood through extensive research, sharks remain a mystery. What we do know, however, is that they’re not on a murderous rampage as Jaws might’ve suggested (what a great white lie that was). As Fox puts it, they’re just badly misunderstood creatures, doing their job of cleaning up the sick and the slow.

“They’re a necessary part of any ocean ecosystem, applying pressure where it’s needed to keep the balance,” he says. “And they have a right to survive rather than be killed off out of fear.”

To that end, more research is required – something Fox is well underway with. At the same time, however, public perception of these majestic creatures needs a major overhaul. Maybe we could all do with a 30-minute face-to-face with Scarface.

• No diving experience is required beforehand as the oxygen tank remains on board and you’re no more than three metres down (the cage is suspended just below the water surface). Qualified SCUBA divers, however, can go beyond surface diving and experience the ocean floor option. That is, where the cage is lowered down onto the ocean floor for a more intimate and up-close experience.

• All gear can be hired, including wetsuit, mask and weightbelt. The main thing you need to pack is anti-seasickness tablets.

• Rodney Fox’s autobiography Sharks, The Sea and Me is out December 2013. 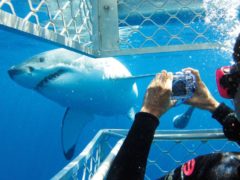 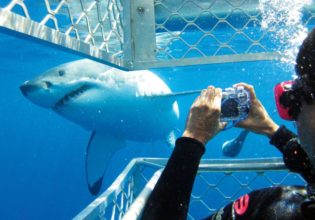 Score: 7.82 This is that bucket list item that you haven’t had the nerve to tick off yet, but is an absolute once-in-a-lifetime opportunity. “If ...