How can something as marvellously grand as the Flinders Ranges’ Wilpena Pound fly under the radar for so long?, asks Steve Madgwick (Photography: Elise Hassey)

If a 17-kilometre-long by eight-kilometre-wide elliptical crown of furiously serrated mountains, with a sunken natural amphitheatre in its centre, were plonked just about anywhere except six hours’ drive north-west of Adelaide, it would surely be a national icon by now.

Wilpena Pound covers eight times the area of Uluru, is 300 metres higher and arguably as culturally significant, yet relatively few Australians know its name or even have the faintest clue where it is. Come face-to-face with this primeval Colosseum writ large and you will instantly become its disciple and want to spread the word. But the tyranny of being located on an outback road to nowhere in particular (unless you’re heading to Lake Eyre) has so far ensured that the Flinders Ranges’ main act remains a fairly peaceful slice of paradise.

There are two ways to get here: either through the Clare Valley or up the shimmering vastness of the coast road from Adelaide, but the rolling blonde farmscape once you arrive at the Southern Flinders – which looks so idyllically Australian that it has been used as the cinematic backdrop for films such as Breaker Morant and Gallipoli – offers no clues to what you’re about to encounter. It isn’t until a shade past the town of Hawker that the horizon begins to get very serious indeed. The Pound’s rise-from-nowhere, crater-esque appearance suggests it was forged by a single earth-quivering episode: a meteor strike that crashed the planet off its axis, perhaps, or a cataclysmic volcano eruption that wiped out the dinosaurs.

The reality is entirely less Hollywood; a painfully slow layering of sediments, starting around 800 million years ago, in a formation known as the Adelaide Geosyncline. Immeasurable pressure in the Earth’s crust compressed the sediments, folding and cajoling them up into a mountain range that once towered over the Himalayas, before erosion robbed South Australia of its Mountains Kingdom title.

But the peaks are on the rise again, millimetre by millimetre, and still stand so tall against the Flinders-scape that it feels like they should be snow-capped. Wilpena’s resemblance to another outback landform adds a cinematic twist (and another layer) to its identity crisis. No, the Pound is absolutely, positively not the infamous Wolfe Creek Crater (although Flinders locations feature in both Wolf Creek films). The real-life doppelgänger is a third of a continent away in the Western Australian outback – and that is actually a meteor crater.

Science versus the serpent

The indigenous Dreaming story behind the creation of Wilpena Pound, also known as Ikara (‘meeting place’) makes for an even more dramatic saga anyway.  According to the lore of traditional owners, the Adnyamathanha (pronounced Ad-na-mut-na) people, the Pound’s precipitous walls are actually the bodies of two intertwined Akurra (giant serpents), whose journey from the northern Flinders seriously remodelled the landscape. “The geology may tell you differently, but from our beliefs it’s obvious,” says Arthur Coulthard, Flinders Ranges National Park senior ranger, a ‘Northwinder’ Adnyamathanha man, who pines to be outside in ‘his country’ rather than stuck behind his desk.  “The ranges are just like a snake print on the earth right here in front of us – especially when you see it from the air.”

According to their history, the two Akurra pursued an old man on the way to a ceremony at Ikara, gorging on people in their path, eventually so full they willed themselves to die. Wilpena’s highest peak, the sacred St Mary’s (1171 metres), is said to be the head of the female serpent.

High above and wandering walks 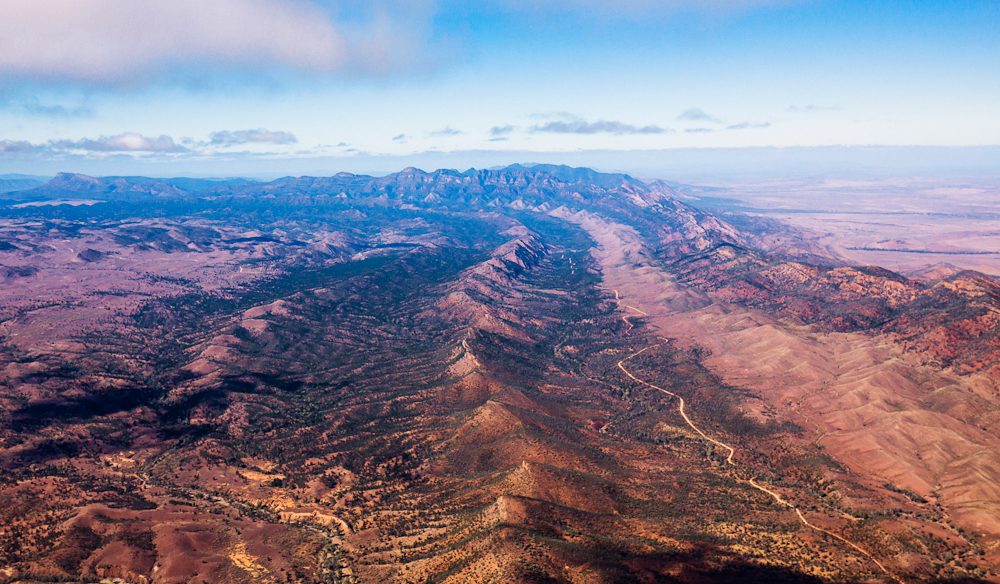 The other side: The Vienetta-like folds of Wilpena Pound, Flinders Ranges.

Avoiding territorial emus and fence-hopping ’roos on the dirt runway are minor obstacles for the Air Wilpena pilot as he takes off, the last barrier before you come to terms with Wilpena’s immensity.

In a small plane, with a few thousand feet of context, the massive rock crown becomes blindingly obvious; the vast Lake Torrens to the west and surrounding ranges seem utterly Lilliputian in comparison with the mighty, Viennetta-like folds of Wilpena Pound.
The ‘only’ other way to garner tangible perspective over this outback leviathan, according to Wilpena Pound Resort guide Michael Hey-Cunningham, is to lace up your walking boots.

“If you really want to get a feeling for the Pound and let it talk to you, then you’re going to climb in it, over it or on it,” he says. Michael was drawn here five years ago from the east coast, “answering a powerful call” that was seeded on a couple of visits as an interstate tour guide.

“It’s simply too big to just brush up against and leave on a coach trip – you really have to get out there.” The Pound is a hiker’s El Dorado, centrepiece to some of the best (and most accessible) outback treks around, including the luxe four-day Arkaba Walk, one of Australia’s eight Great Walks, the titanic 1200-kilometre Heysen Trail, and day walks as far as your pins will carry you.

The gently sloping (compared with the sheer outer face) inner basin is only accessible on foot, most commonly via a mellow trail from Wilpena Pound Resort, which sits almost directly under the walls to the east.

The track winds along a (usually dry) creek bed, through a natural avenue of lofty old river gums, some petrified by lightning, some thriving, up to old Hills Homestead, a sound place to start the post-settlement history lesson. Further up the steeper trail to Wangara Lookout, you clear the tree-line and the amphitheatre unfolds before you.

The spirit of endurance Until the early 20th century, early local settlers, the Hills family, farmed the inner Pound, an exercise in toil that is difficult to appreciate by today’s standards. They abandoned their attempts altogether, after a ruinous flood in 1914.

Generations of doggedly optimistic pastoralists made the trek north from Adelaide, some successful, others paying the price for using farming techniques more at home in fecund Mother England than the parched, stone-like Flinders ground, a place where it takes 10 acres of land to feed one single sheep. And when the elements weren’t against them, other inconceivable forces sometimes prevailed.

“A farmer apparently once put 500 sheep into the Pound and went back to find not one of them in there – not one,” says Hey-Cunningham. “Dingoes? Wandered off? Something else, perhaps?”

Wilpena Station, a working cattle station from 1852 until 1985, once engulfed the entire Pound and its surrounds (around 1000 square-kilometres). The old homestead and a cluster of quaint historical accoutrements still stand; a meandering interpretative trail depicts settler life and hardships, and shows how conflicting approaches to maintaining livelihoods decimated the Adnyamathanha.

Even more than the abandoned homesteads that pepper the landscape, one single tree perhaps best exemplifies the mettle it takes to survive the Flinders elements.

In 1937, photographer Harold Cazneaux captured an image of a grand river redgum, which “stood in solitary grandeur on a lonely arid plateau … long before the shade from its giant limbs ever gave shelter from heat to white men”.

‘The Cazneaux Tree’ still stands defiant today, glaring up at the Pound from outside, like a stubborn old man, scarred by the elements, but still “unconquered, it speaks to us from a spirit of endurance”. Cazneaux’s spirit flows through Wilpena’s prolific and energetic fauna, so abundant that the whole area feels like a colossal open-range zoo. When a Wilpena local tells you that there’s a lot of traffic on the road, he or she’s probably talking about the dusk wildlife migration, not the cars or caravans.

In spring, single emu dads roam the plains with four, five, sometimes six disparately-sized striped chicks in tow. In an anomaly of nature, mum has long since abandoned the brood.

Overhead, eagles soar in thermal winds that sweep off the Pound, in search of their next meal – often it’s pre-prepared road-kill for supper. These birds of prey are top of the food chain here, though the pesky magpie is constantly in their face.

The stout and coy yellow-footed rock wallaby, with a long, soft stripy tail that can sit between its legs (quite the skill – it’s something kangaroos can’t manage), was recently on the brink of extinction, hunted for its striking pelt by settlers and eaten by the Adnyamathanha until, by 1992, there were only around 40 left. Today they have literally bounced back: around 1200 live among the shaded boulders of dramatically abrupt Brachina Gorge.

Meanwhile, back in the 21st century Around these parts, accommodation-wise at least, roughing it has become so 19th century. The secluded valley above Wilpena Pound Resort cradles one of Australia’s most spectacularly placed glampsites, Ikara. The pitched-roof safari tents hint at camping, but this is way more glamp than camp, with plenty of luxe touches veiled behind the canvas.

First surprise inside? A wall. On that wall? A mounted air-conditioner. On the other side of that wall? A real bathroom, clad in charcoal-coloured slate tiles, a spacious shower recess and a waterfall shower head. Add to these hardwood floors and understated furnishings and, well, you get the picture.

There are plenty of other quality accommodation options too, such as the slick Eco Villas of Rawnsley Park, the classic Arkaba Station, a smattering of other station stays, such as Willow Springs, and a plethora of campsites within the national park.

Night-life is simple, refined: evenings are best spent in the company of loved ones, gazing into the enormous Flinders sky. Perhaps a guided drive to Stokes Hill Lookout for sunset, a filmic 360-degree perspective of all the ranges’ moods; the reds, the oranges, the pinks of the setting sun slow-dance for you while you sip a local-ish red and nibble cheese of character.

All the while, you stare at the grand unknown icon and it watches you knowingly in return.

Wilpena Pound is 460 kilometres from Adelaide airport, around five-and-a-half hours’ drive. Try the coast road (Princes Highway) on the way up and head back via the Clare Valley for a well-rounded trip.

• We stayed at Ikara Safari Camp, a collection of 15 ensuited, air-conditioned safari tents. Rates start from $230 per night, twin-share including accommodation and breakfast.

• We highly recommend a scenic flight over the Pound – a great way to realise its immense size and beauty. A 30-minute flight with Air Wilpena costs $199.

• For detailed maps and information on walking in the Flinders Ranges National Park see environment.sa.gov.au So you’ve made it to Wilpena Pound, the great unknown icon of the Flinders Ranges and feel like exploring the outback further? Try these five road t... 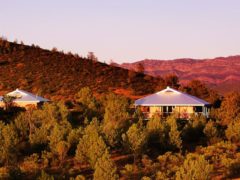 Luxury hiking in the Flinders Ranges with Rawnsley Park Station

Who says hiking in outback environs like the Flinders Ranges means you have to rough it? Steve Madgwick finds country-style pampering and sound eco ph... All you need is two feet and a heartbeat, says Clementine Ford, who embarks on the Arkaba Walk in the Flinders Ranges. It doesn’t begin well. Despi...