An unforgettable journey to Tasmania's Bay of Fires 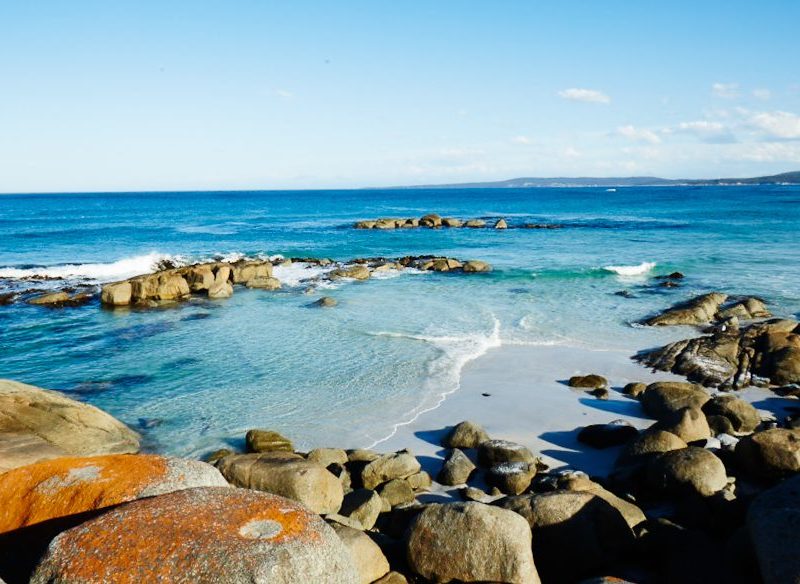 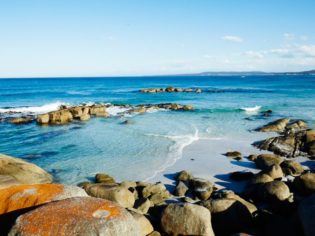 The Bay of Fires, found in a remote, wind-swept corner of Tasmania, is surely one of this country’s most startling natural wonders for its constantly changing moods.

Crossing the dark blue waters of the Bass Strait, the coastline of Tasmania comes into view past the whirling propeller of the airplane engine perched just outside my window.

It stretches into the distance straight and true, a golden yellow line of sand butting up against fertile green countryside beyond.

Of course the bucolic allure of our southern island state is much celebrated, but as I make my way through it from Launceston, past rolling fields dotted with sheep and gums and sleepy towns of proud little cottages, I am in search of a different colour altogether. 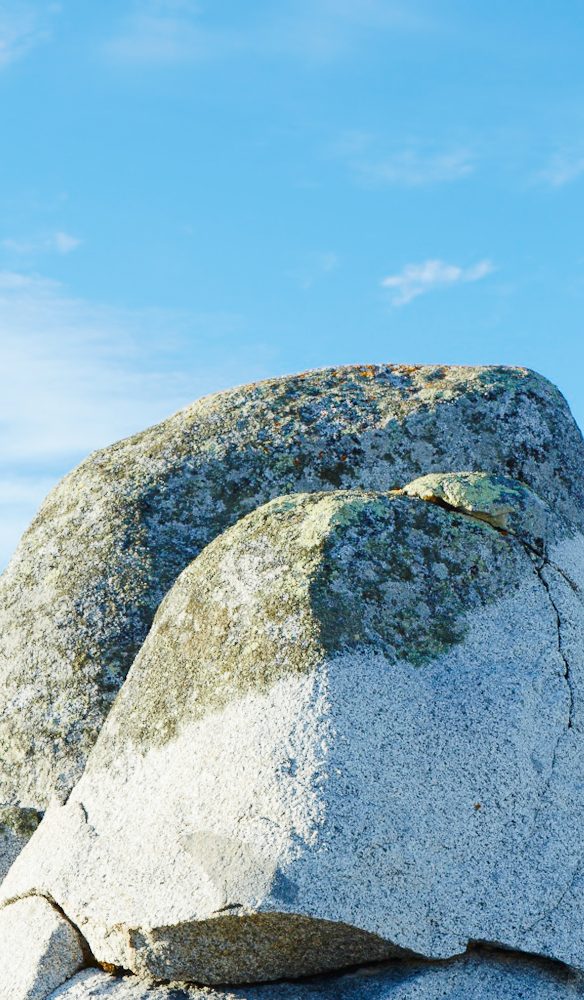 The Bay of Fires has long fascinated my imagination: an unfettered coastline scattered with mammoth boulders of rich ochre red and steely blue granite that is lapped (sometimes violently thrashed) by azure waters.

I stop first at Evandale, just down the road from Launceston Airport, a stunningly pretty village of historic buildings and houses, with manicured lawns and picket fences in abundance. 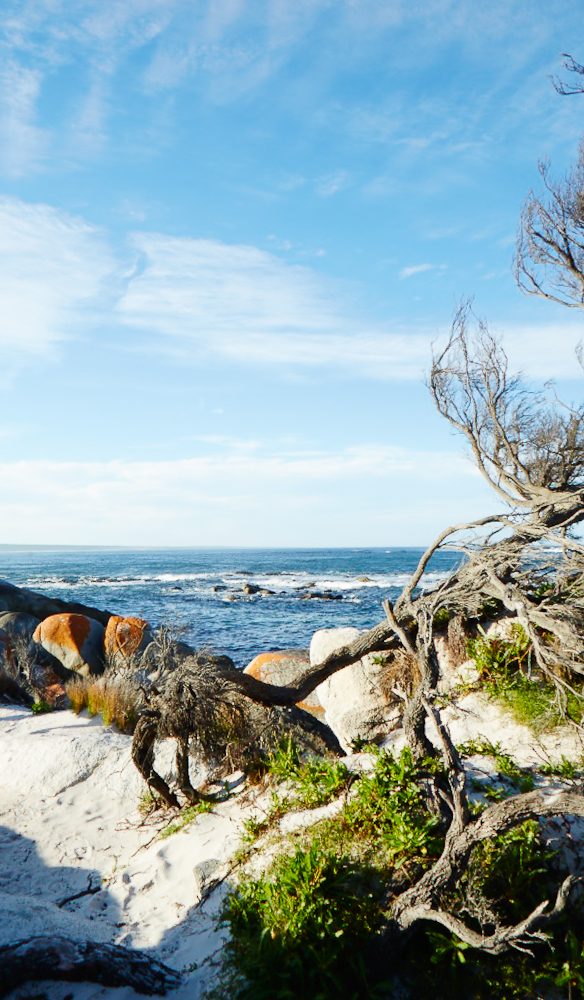 It is exactly the kind of chocolate box scene you would assume Tasmania is populated with. The pretence for the stop is lunch, sustenance for the nearly two-and-a-half-hour drive ahead.

But having visited before on a previous trip to attend the impossibly quaint weekend markets that pop up here on a weekly basis (entry is gained by a silver coin donation), I am happy to return, albeit fleetingly, for more of its loveliness.

After consuming heaped plates of smoked Tasmanian salmon (what else?) at Ingleside Bakery Cafe on the main thoroughfare of Russell Street, my drive begins in earnest.

For a haggard Sydney driver like myself, the roads of Tasmania are a privilege, the journey devoid of traffic and stress. The land is flat and wide through the windscreen for the bulk of the drive, punctuated by blink-and-you’ll-miss-it towns like Fingal and St Marys.

As the sun slowly moves through the sky into afternoon, its light casts a warm, filtered glow across the grass and the trees that straddle the Esk Highway (which, in spite of its name, consists of a two-way road most of the time). 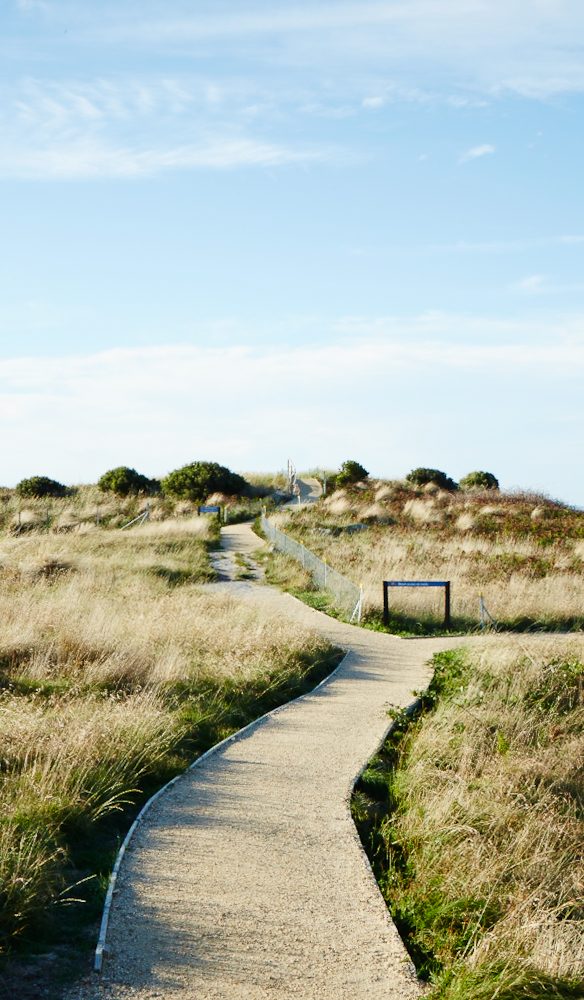 By the time the bitumen starts sloping down towards the coast I am craning to see water after two hours of inland vistas. But the bay doesn’t give up her beauty that easily.

I zigzag down a road that is bordered on one side by rockface and on the other by nothing at all, slowing to navigate the tight corners and squeeze past the occasional car or truck.

And then suddenly all is blue as I traverse the last leg into St Helens, the largest town in the area and my base for exploring these parts. A former hub for the whalers and sealers who plied their trade here in the early 1800s, St Helens really came of age when tin was discovered in its surrounds in the 1870s.

But the tin mines closed in the early 1990s, and since then St Helens has settled into a slower pace, trading on its natural wonders in a more positive way, through tourism, oyster farming and fishing.

The town is not quite sleepy, not really bustling either, but there’s something instantly likeable about it.

The main street has fishing tackle shops, fish and chips takeaways, and supermarkets, as well as some proud Victorian buildings and a few restaurants, most of the kitchens of which charmingly close at 8pm.

At this point though, the town only holds allure as a rest stop, somewhere to stretch my legs and check into my overnight accommodation before I am back in the car in search of my ultimate goal: the Bay of Fires.

Sometimes long journeys like the one I have taken to get this far (it has involved trains, planes and automobiles) can have an adverse effect on the final destination: you spend so much of your time anticipating and building it up to unachievable levels of beauty that inevitably there is some level of disappointment when you finally arrive and are presented with reality.

Driving past neatly organised oyster farms, I turn onto a quiet road encroached by white sand and the kind of hearty, scrubby bushes that can survive this close to the wilds of the coast.

Roads lead off to places like Humbug Point and Little Elephant. I am heading to the end of The Gardens Road, the full-stop at the end of the journey (you can’t go any further by road from there).

Suddenly out of the window I start to glimpse little beaches rimmed with red rocks, the white sands appearing startlingly bright in the endless sunshine overhead. It is all I can do to stay in the car, but this is only a tempting preview of what is to come.

Pulling up in the small carpark, watched over by a herd of long-lashed cows in a neighbouring paddock, I head along the track laid out in the sand and wispy coastal grasses.

Everywhere I look there are hulking red, red rocks and boulders, their rich hues contrasted to absolute perfection by the pure blue of the waters of the Tasman Sea and the cloudless skies, which meet on the horizon and stretch to forever. Disappointment is not an option. 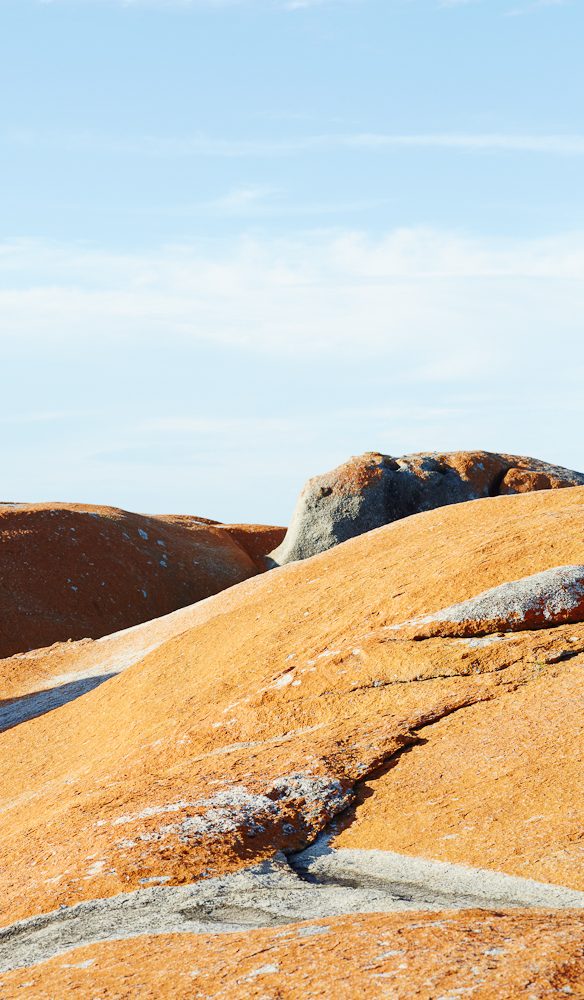 The ochre boulders of the Bay of Fires form a stark contrast with a clear blue sky (photo: Corrie Bond).

Surveying the landscape it is easy to make the assumption that the Bay of Fires was named for the colour of the rocks I am currently standing on, but the name was actually bestowed in 1773 when Captain Tobias Furneaux, sailing aboard the HMS Adventure, noticed the fires lit by the indigenous people who existed along the coastline.

Furneaux didn’t set foot on the land but he did change it forever: the naming of the Bay of Fires was one of the first imprints on the area by Europeans. Furneaux went on to name nearby Georges Bay and St Helens Point, after St Helens on the Isle of Wight.

Scrabbling from rock to rock, I notice that so many of the forms are actually ringed with the characteristic red, which then suddenly gives way to the steely blue greys of solid, impervious granite.

I find out that the distinctive red colour is in fact lichen, which over time has become one with its host, forming a hybrid of colour and texture. 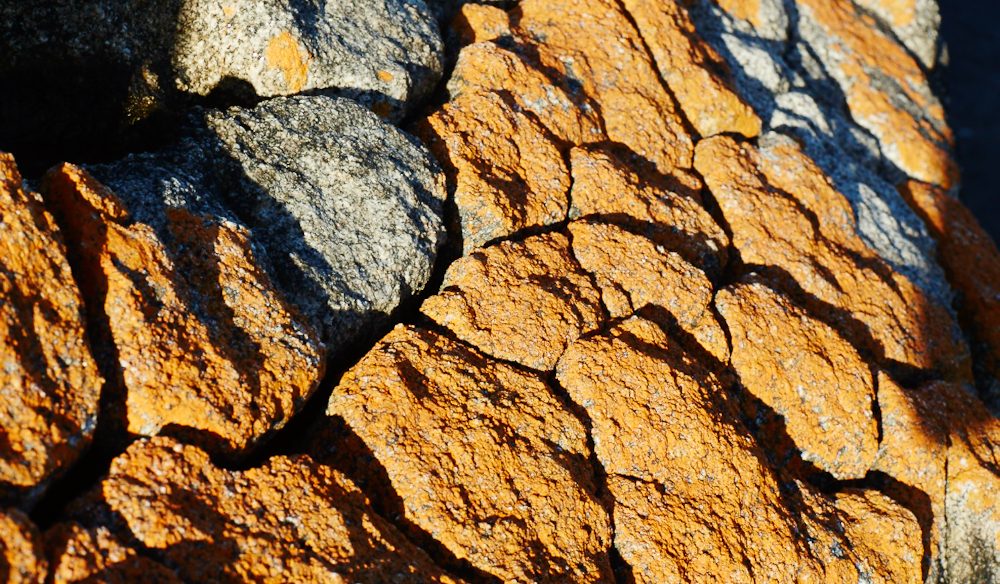 As a gentle afternoon breeze wafts in off the water, the scene is at once alive with movement and eerily quiet and still.

The rocks stay resolutely unchanged, but elsewhere crabs scuttle in the crevices between them, seabirds wheel above, waves lap the sand and small spiky orbs spin across the beach before coming to rest in the nooks and corners of the rocks. 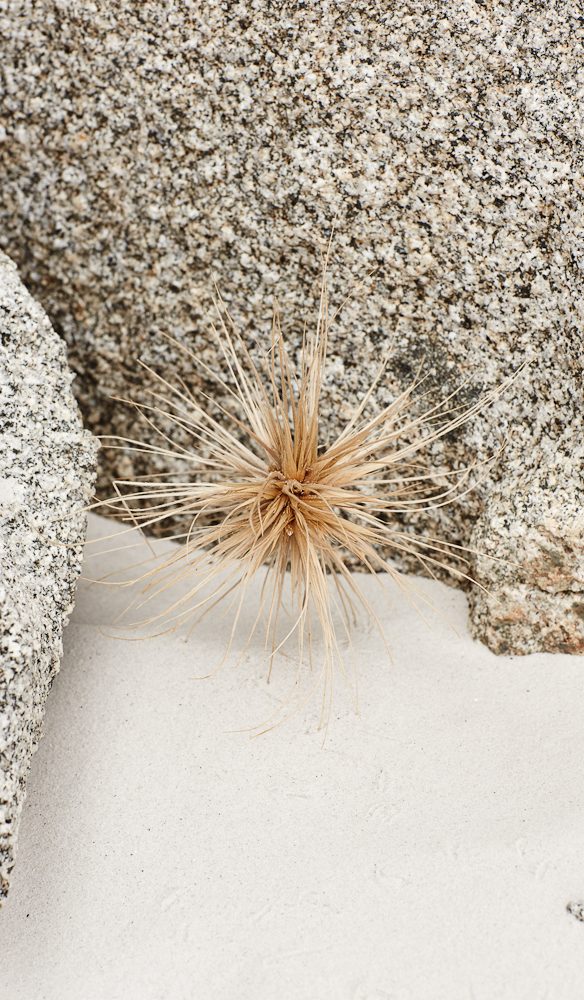 The spiky orb of a spinifex gets trapped by wind in the rocks (photo: Corrie Bond).

I am surprised by how few people there are here; I would expect something as breathtaking as this to be over-subscribed with snap-happy tourists, but on this glorious afternoon I can count them on two hands. Not that I am complaining; more for me.

As the light starts to fade I wrench myself away to explore the surrounding area. At the T-intersection at the other end of The Gardens Road I take the route to Binalong Bay, a quiet hamlet of impressive holiday homes and a little dock where locals sit and fish for tonight’s dinner.

I can imagine it is a big drawcard during the high summer months, but now it is so quiet that you almost feel like you are intruding on the locals’ solitude in some way.

When I wake the next day ready to return to Bay of Fires, the weather has turned, with ominous grey skies above that hold the promise of rain.

When I arrive I strike out to retrace my steps, only to find a very different landscape to the one I encountered the day before.

The absence of sunlight has turned the seas a glossy dark jade, and while yesterday red was the hero here, today is all about moody tones of grey. 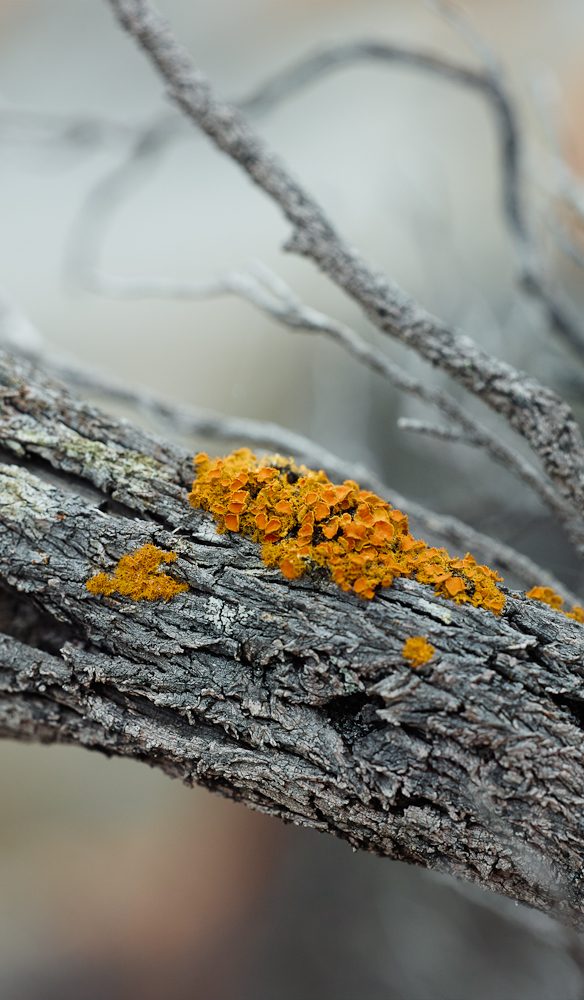 The contrast is stark, but the effect is no less arresting than before. The ethereal grey-on-grey tones – from almost milky white to forebodingly dark – are otherworldly, while the richness of the ochre has been softened by the light to a much deeper rustic red.

I am suddenly aware of the sculptural beauty of the gnarled tree trunks huddled at the water’s edge, where previously I had been all-consumed by brightness.

I couldn’t have imagined this place being more beautiful than it was when I arrived here just the day before, but as I pass my time collecting shells and sea glass, its once-sharp edges dulled by the constant churning of sea and sand, occasionally leaning into the now ice-cold rock surfaces for respite from the persistent winds, I find myself torn deciding which incarnation of the Bay of Fires I actually prefer.

As I begin my journey back to Launceston in the pitch dark of the following morning, I’m robbed of the chance for one last look at the Bay of Fires, and the possibility of experiencing it anew depending what the day brings. 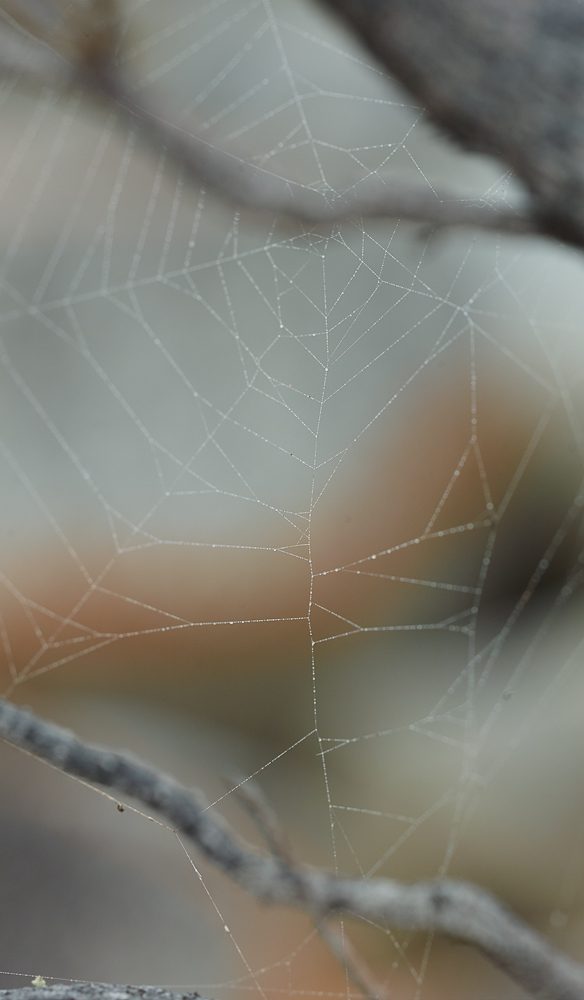 Its ability to morph and transform on an almost daily basis makes this a totally compelling proposition, a bay of plenty in fact.

The details: Bay Of Fires

Staying there: A great place from which to explore the Bay of Fires, Tidal Waters Resort has waterfront views of Georges Bay. From $160 a night.

Eden at Bay of Fires is a luxurious beach house with sweeping panoramas of the Tasman Sea. From $700 a night.

Getting there: Qantas fly daily to Launceston Airport from Sydney and Melbourne. 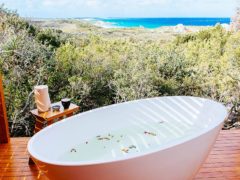 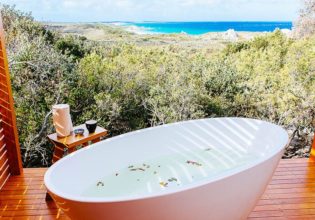 Walking the Bay of Fires Lodge Walk through the lens

A glimpse into Tasmania’s award-winning Bay of Fires Lodge Walk, through the lens of photographer Elise Hassey. This place is so incredible that I ...