It's time to return to Mallacoota this summer 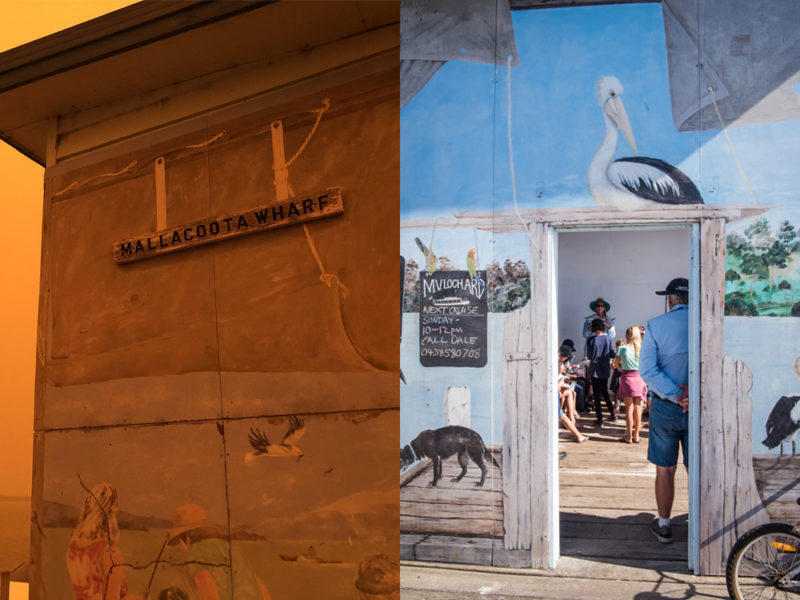 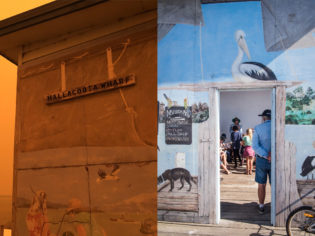 Sir Isaac Newton may have discovered the fundamental laws of physics – gravity, motion, equal and opposite forces and all that – and Einstein might have worked out the mathematics behind the relativity of space and time, but they both missed the Mallacoota Law of Timelessness. I’m not exactly sure how it works, but when you’re in, on or near the water in Mallacoota, time slows down and everything looks – and feels – good.

With a string of uncrowded surf beaches and a vast expanse of fish-filled water in two connected lakes there are more ways to mess about in boats – as well as in floats, flippers and thongs, on beaches and jetties and shady verandas and foreshore campsites – than even Sir Isaac or Einstein could count. Because time spent at Mallacoota is all about soaking in the views and having splashy fun in the sun.

Rising from the ashes

It’s been a tough year for this pretty little coastal town – population 900 – on the Victorian side of the border roughly halfway between Sydney and Melbourne. When the bushfires hit Mallacoota last summer, the red skies and naval evacuation made international headlines, blasting a heart-rending image of the devastation of the fires to the country and world. 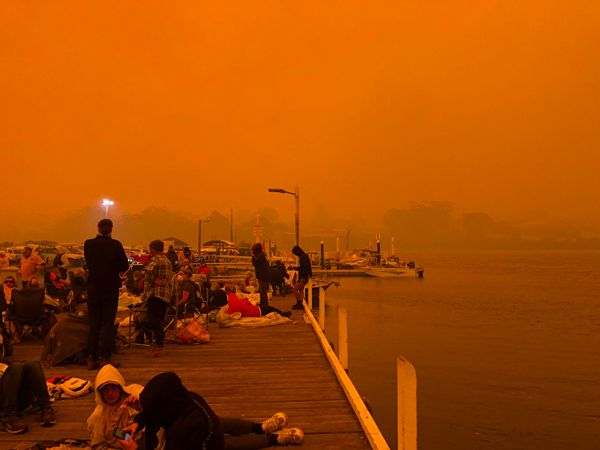 The residents of Mallacoota waiting to be evacuated from the wharf during the fires of 2019/20. (Image: Nicola Brown) The destructive path of the fires seen from above. (Image: Jodie York)

Tragically, 123 houses were lost, and there’s no hiding the impact of the blaze on the landscape as you drive through the forest to get there. But it’s been 10 months since the fires swept through and most of the trees are now covered with lush regrowth, the black trunks green with epicormic shoots. The understory, stripped of the usual shrub cover, is now bright with lime green ferns, and if you look closely you’ll see that the ground is carpeted in tiny delicate wildflowers and orchids.

The animals, too, are coming back, and the weird half-strangled shrieks you hear in the middle of the night are just frisky koalas keen to get it on under the cover of darkness. 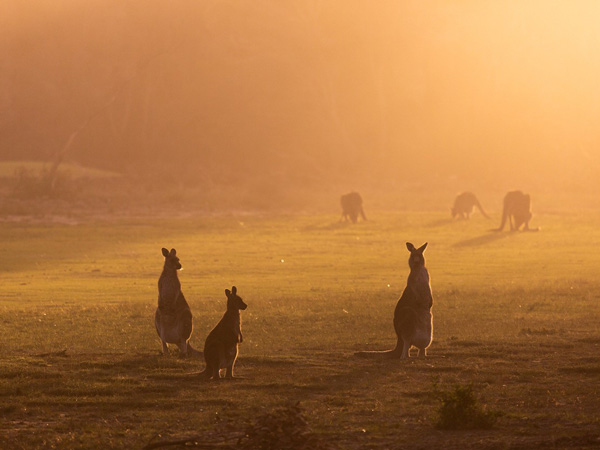 The landscape has started to rejuvenate and the animals are returning to Mallacoota. (Image: Scott Kingman)

All that’s missing are the holiday makers. Locals are counting the days until the streets buzz with happy campers, anglers and sunseekers again, bringing with them a return to days before the fires ravaged their town and the hope that summer will deliver even more renewal – and healing – than what you can see in the trees.

Cruising Mallacoota Inlet aboard the MV Loch-Ard, a cute 112-year-old ferry made of huon pine and kauri, it’s like last summer never happened. There are a few less wooden jetties than there used to be, but otherwise everything looks just as beautiful as it ever has.

White-bellied sea eagles swoop down from the sky to pluck prey from the water so fast that you barely have time to focus on the action before it’s over. Whistling kites whistle from their nests in the treetops on the shoreline, while pelicans and black swans ignore us – like they always do – as they drift by full of nonchalance and attitude. Lace monitors stalk grassy picnic spots on uninhabited islands and waterbirds wade through the shallows searching for a feed. 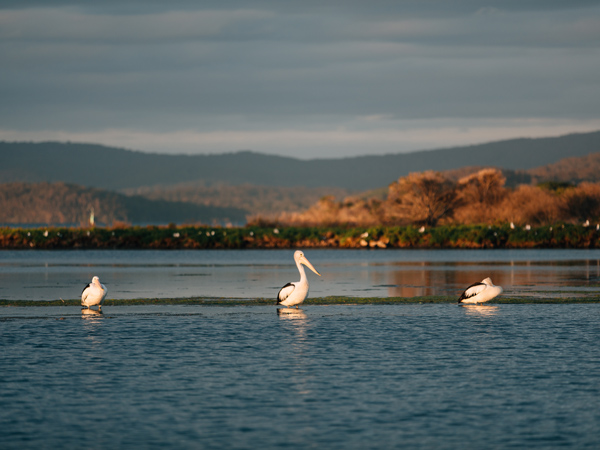 Mallacoota has a special kind of timelessness. Encircled by 880 square kilometres of national park wilderness – Croajingolong National Park is UNESCO World Biosphere Reserve and the area is known as the Wilderness Coast – Mallacoota will never lose its small town charms. Holidays here are delightfully old school, just like the ones you remember from childhood. Accommodation is in rambling old guesthouses with shared kitchens and communal dining tables and lakeside holiday houses with killer water views. 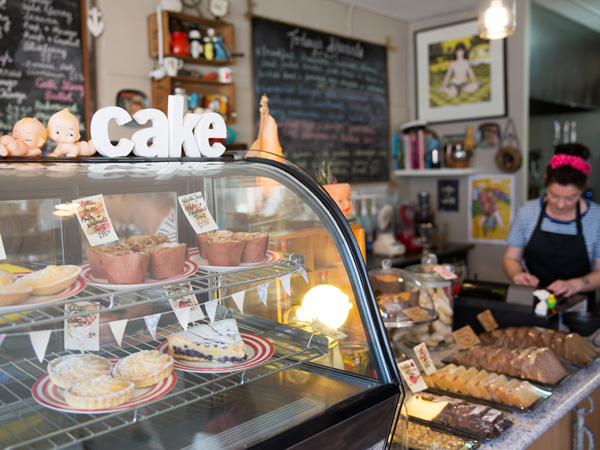 The foreshore caravan park occupies the best real estate in town and by the time you leave your kids will have made new best friends with all the other kids staying in the park. Don’t expect jumping castles and fancy amusement parks – a holiday in Mallacoota is all about making your own fun, riding bicycles along lakeside cycle paths, hiring a tinnie, kayak or paddle board, swimming and surfing and walking coastal trails and getting lost in a book in a shady spot. Holiday dining is a long lazy picnic lunch and fish and chips for dinner. 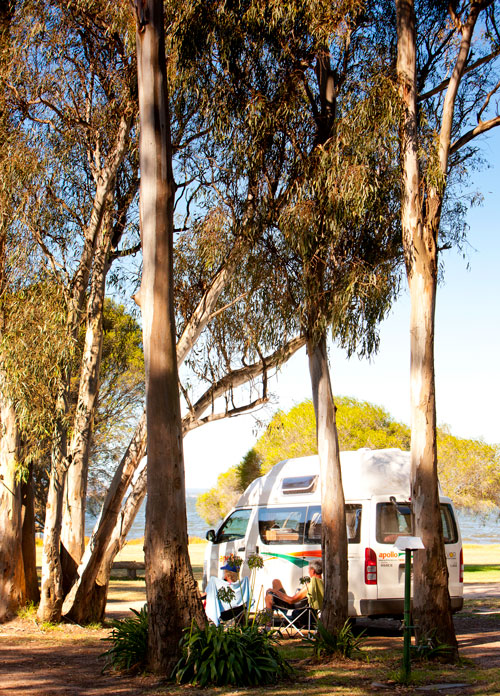 Fishy business on the lake

Mallacoota’s famous for its big fish, and the fishing’s better than ever, according to ex-abalone diver Colin Gilchrist. Like almost all the locals I meet in Mallacoota, he wears several hats: today it’s a captain’s cap, as he expertly steers the Loch-Ard around the hidden coves of the bottom of Mallacoota’s two lakes, but he’s also the local bus driver and was the president of the Mallacoota Angling Club.

“There’s been next to no-one fishing for almost a year,” he explains, with pandemic travel restrictions following the disastrous bushfire season. “It’s just what the lake needed. The fish have had time to grow. It’s really not hard to catch a fish in Mallacoota.” 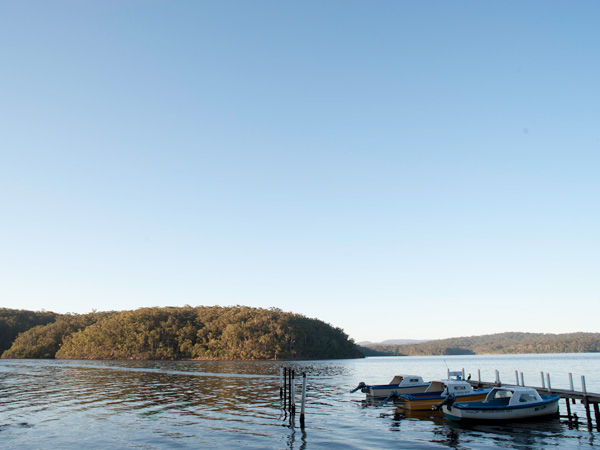 Flathead’s the most sought after catch, although there’s plenty of bream, whiting, salmon and tailor too, and Colin says folk often hook tuna in the sea, but it’s the abalone that the town is most renowned for, and it seems that just about everyone I meet either is, was, or is married to an abalone diver. Most of it is exported straight to Asia, but you can try some at Lucy’s noodle house in the main street, which has a cult following with locals for her hand-made rice noodles and silky soft dumplings. 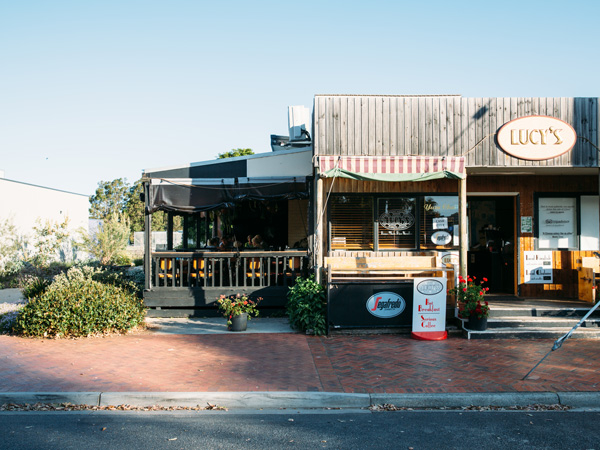 Get a taste of the region’s fresh seafood at Lucy’s noodle house on the main street. (Image: Destination Gippsland).

Seafood for the soul

Over a bowl of noodles and abalone I chat to Jodie York, the force behind the annual Wild Harvest Seafood Festival. 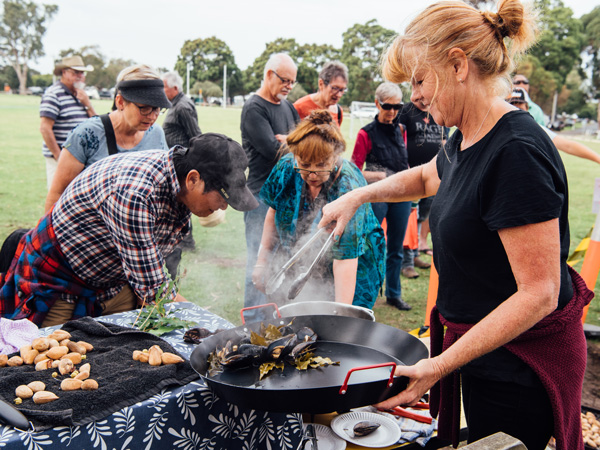 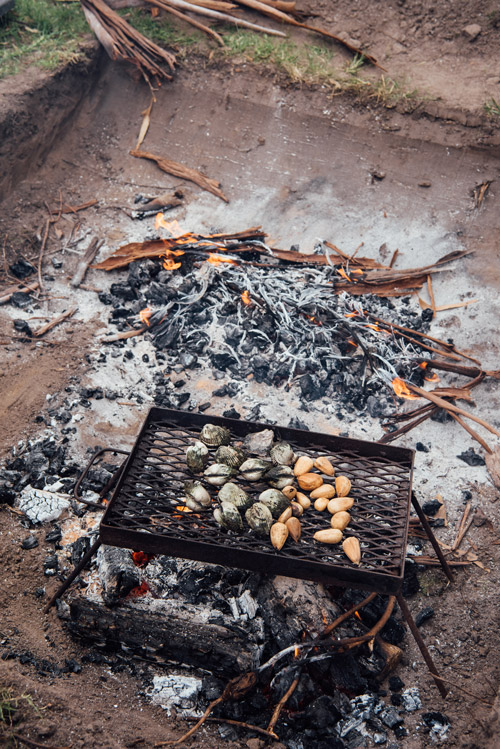 Taste and learn about Mallacoota’s seafood at the festival. (Image: Vanessa Janss)

We have so much great seafood here, says Jodie, which includes sea urchins as well as abalone and fish. “The festival was born out of the desire to showcase the abundance and quality of the seafood in and around Mallacoota, coupled with the love we have for the ocean,” she says as she explains that it’s more than just a food festival.  “It’s an opportunity to taste and learn about our unique seafood and ocean related products while enjoying live music, films, art, local beer and wine and all that makes Mallacoota the special place it is.” 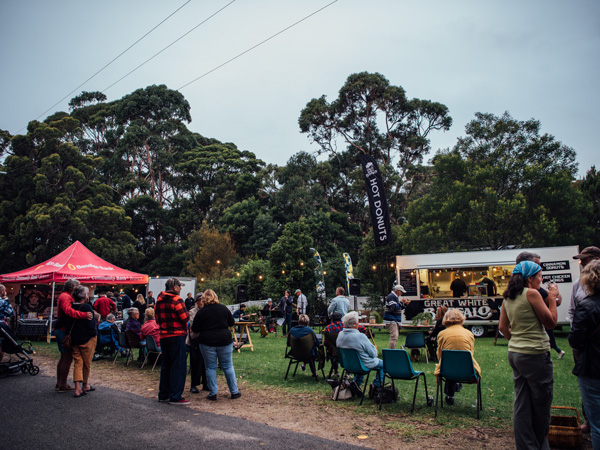 This year’s festival, in April, was postponed due to the pandemic, but she’s looking forward to summer, and is hoping to resurrect the festival in the coming months. 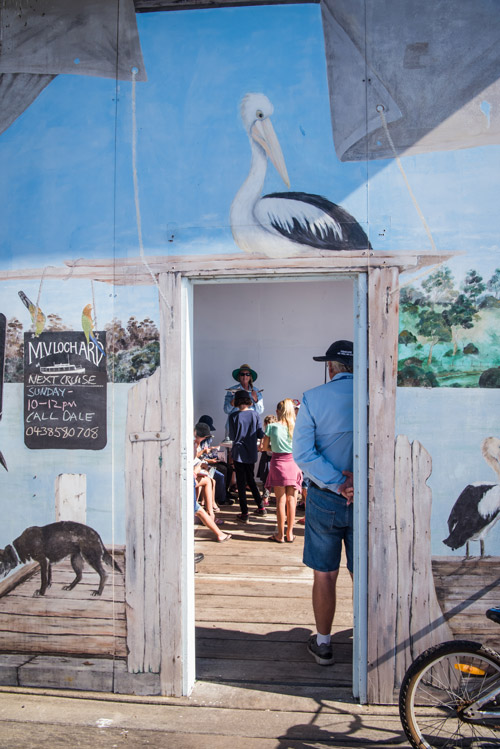 The festival is set to return after being postponed in April. (Image: Vanessa Janss)

In the meantime, as the town gets ready to welcome back the campers and anglers, surfers and sunseekers over summer, bringing a much needed boost to both morale and local businesses, Jodie’s enjoying getting out on the water with her family as often as she can. 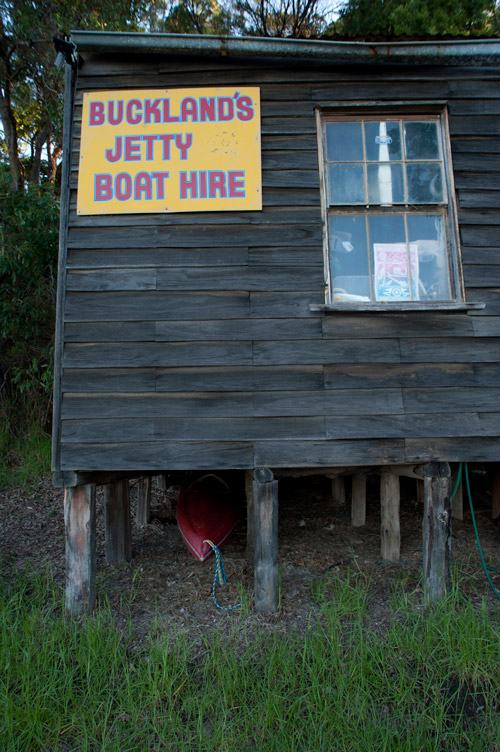 Hire a boat from Buckland’s Jetty Boat Hire to explore out on the water. (Image: Destination Gippsland)

“I spend a lot of my summer on the water, on the lake,” she says. “We love to barbecue and picnic at Cemetery Bight. There’s a beautiful sandy beach over there. There’s a jetty and barbecue area, and the goannas are amazing. And the swimming’s beautiful.”

For visitors wanting to do the same thing getting there is easy she says. You can hire a boat – you don’t need a license and there are two boat sheds in town – or a kayak if you’re keen for a paddle. There are several similar spots scattered around the lake’s edge – Jodie also recommends Allens Head, which also has a gas barbecue, picnic table and million-dollar views. 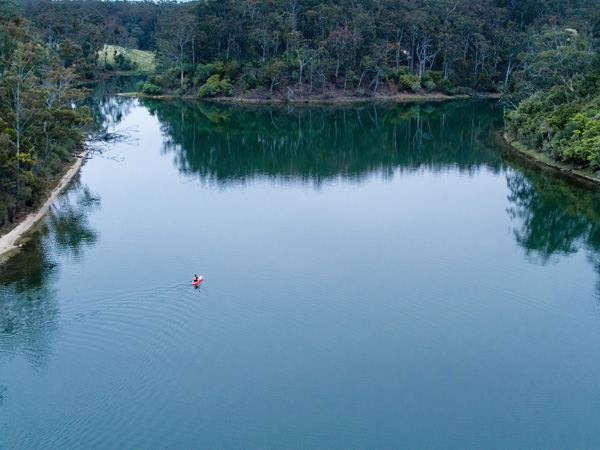 Seems the locals know all about the Mallacoota Law of timelessness.

Mallacoota is around a 6.5 hour drive from Melbourne (521km) or seven-hour drive south of Sydney (560km) on the Princes Highway in East Gippsland.

Karbeethong Lodge had been welcoming guests since 1922. Ask for one of the ensuite rooms that open off the verandah for great lakeside views. 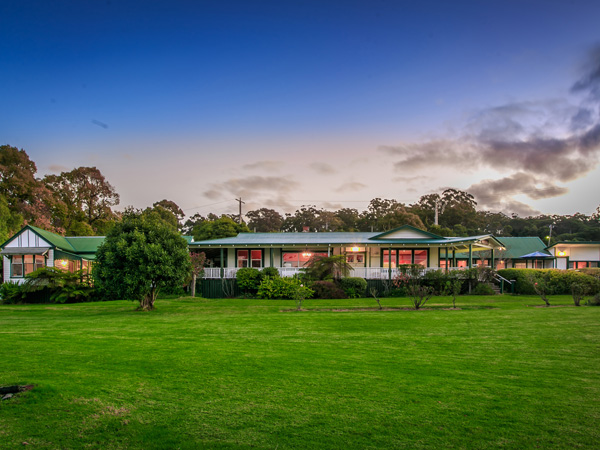 Two-hour cruises on the MV Loch-Ard depart from the main wharf in Mallacoota.

Want to know more? Head to visitgippsland.com.au to start planning a summer holiday in Mallacoota. 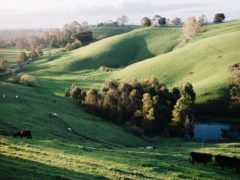 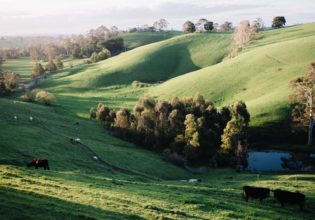 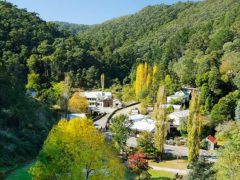 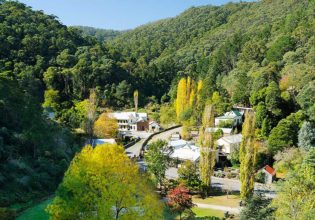 As chairman of Tourism Australia and a former Deputy Prime Minister, he’s travelled to all corners of this country. With Walhalla, on your behalf, h...