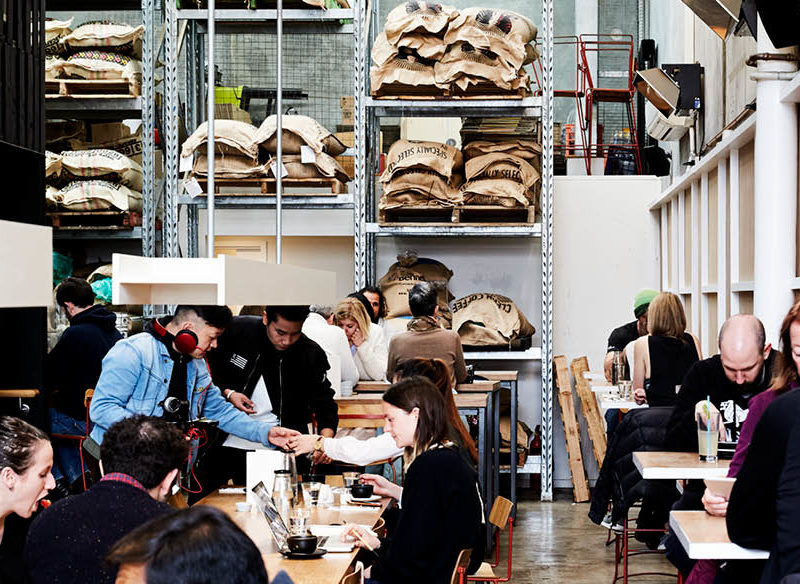 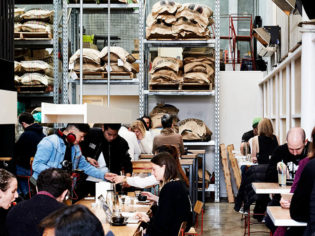 Take a tour of Melbourne’s coffee hot spots to find out exactly how the city’s cafe culture became an icon of the international foodie scene.

It might be mushrooms on toast but there’s nothing ordinary about these sautéed local pine mushrooms tossed with cress and served with poached eggs and a soft Parmesan pudding on wholegrain Zeally Bay Sourdough. On the side is not just any fruit salad, but baked lemon ricotta parfait with blood plums (wow, what a flavour), passionfruit dressing, Brazil nuts and toasted seeds. A selection of Ethiopian ‘naturals’ is on the coffee blackboard menu. As a splurge, I order a $12 ‘Zorro’ Geisha V60 (‘tastes like strawberry jam and creamy as f@#k’) as a pour over. Sunshine streams in through the large windows of this red-brick former textile mill on a quiet side street of Collingwood. Reggae plays on the vinyl beside the espresso machine at Proud Mary and all’s right with the world.

Melbourne has become the epicentre of world coffee culture, almost in spite of itself. It’s not like there was an organised campaign but more a happy combination of factors – call it a zeitgeist really – that came together in a perfect brew. “The Melbourne cafe is now a genre around the world in the same vein as an Irish pub or a French bistro,” says ST. ALi and Sensory Lab owner Salvatore Malatesta.

But what actually defines the Melbourne cafe? How did the aesthetic get started? And what are its essential components?

There is the influence of Italian immigrants, not just post-Second World War, but as early as the 1930s when Café Florentino gave Melbourne its taste for espresso. And everyone has a soft spot for Pellegrini’s, the funky espresso bar on Bourke Street that feels like it’s in a time warp, with the same vibe it had when it opened in 1954. But it wasn’t until around the turn of the 21st century that a few trailblazers, like Mark Dundon from Seven Seeds, started sourcing green beans directly from growers in the developing world. That’s when attention to quality at the source ratcheted up many notches. 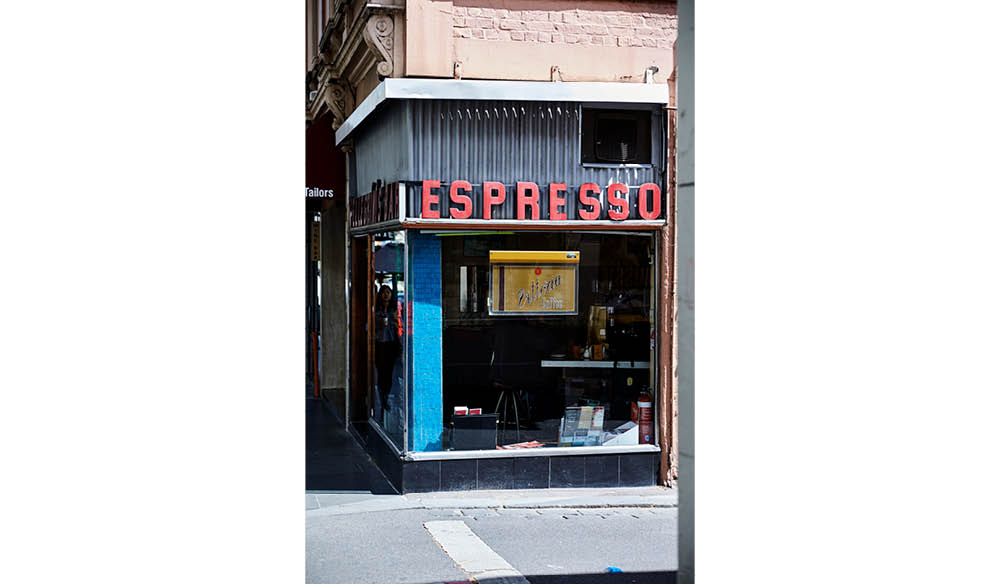 Fast forward to now and, according to Seven Seed’s co-founder Bridget Amor, to qualify as a serious Melbourne cafe “a place has to offer the trinity of excellent coffee, food and service”.

Of course, the baseline is superb coffee, with a great selection of single origin coffees and interesting blends. This means attention to the sourcing of high-quality green beans, good roasting and great baristas. But that is no longer sufficient. Now there must be interesting restaurant-quality food in a cafe environment with everything made from scratch with top-notch, carefully sourced ingredients. We’re talking bespoke milks and sugars, local farm-fresh eggs and produce, rare-breed Berkshire pigs for small goods, serious breads, a fine array of quality teas. And, while the atmosphere is casual, the service must be knowledgeable and professional.

“It’s all in the details,” says Proud Mary’s founder Nolan Hirte. “If it is on the menu it’s there for a reason.”

“Melbourne has one of the most exciting and mature food and beverage scenes in the world, which we sometimes take for granted,” says Malatesta.

“We have such a rich multicultural diversity with Italian, Greek, Vietnamese, Indian, and Sudanese immigrants; all of whom offer authentic, cheap homemade food the way mama makes it,” adds Hirte. “The raw materials are all there to scale up.”

There are other key elements too. Every single cafe entrepreneur acknowledges Melbourne’s adventurous and discerning consumers. And they’re not all hipsters, either. From construction workers, to mums pushing strollers, to suits in the CBD, Melburnians are obsessed with good coffee. “Melbourne has the best customers on the planet,” says Hirte. “No matter how much we increase the price to try out our crazy ideas… there will be people who’ll wait 45 minutes and pay $10 for a cup of coffee. Our customers demand excellence… it wouldn’t have happened without the customers.”

Trevor Simmons, co-founder of Industry Beans agrees: “Melbourne has a fantastic culture of coffee drinkers and cafe lovers wanting more unique and developed products, which has helped us be innovative. Melbourne is a world coffee leader because of this unparalleled consumer culture fused with producers and creators.”
There is also nothing generic about the quintessential Melbourne cafe. It’s all about individuals doing their own thing, creating interesting gathering spots in tucked-away laneways or small neighbourhood nooks. Melbourne has always thrived in the experimental cracks between the grand spaces and it is certainly not limited to hipster enclaves such as Fitzroy, Collingwood and Brunswick. You only have to look at the Switchboard cafe, in a former electrical switchboard station in the Manchester Unity Building on the corner of the CBD’s Swanston and Collins streets to get the gist.

Simmons of Industry Beans hand-built his first cafe, Penny Farthing Espresso in Northcote, with his brother Steve for just $40,000 with the help of a retired Dutch builder. It’s all part of a do-it-yourself, start-up culture that goes hand in hand with creative coffee rosetta art and long communal tables where folks can gather for refreshments without breaking the bank.

Today, Melbourne has more than 1900 cafes. These days, multi-million-dollar CBD cafe fit-outs are becoming the norm but an idiosyncratic spirit remains. That and the constant striving to provide the exceptional coffee, food and service that has become the hallmark of ‘the Melbourne cafe’.

A Melbourne tour via its cafes

Seven Seeds takes its name from the seven seeds of fertile coffee that Baba Budan smuggled out of Yemen into India in the 17th century to bring coffee culture to the West. Its airy, industrial-chic cafe is located near the University of Melbourne in Carlton. Other (tiny) cafes in the stable include Brother Baba Budan, with its motley collection of chairs hanging from the ceiling and Traveller COFFEe, both in the CBD. 114 Berkeley Street, Carlton.

Proud Mary is an airy corner cafe in a former Collingwood warehouse that exudes hipster chic and has the serious coffee and foodie cred to make it a must-visit on your Melbourne coffee tour. Nolan Hirte recently opened Proud Mary Portland in Oregon. 172 Oxford Street, Collingwood. 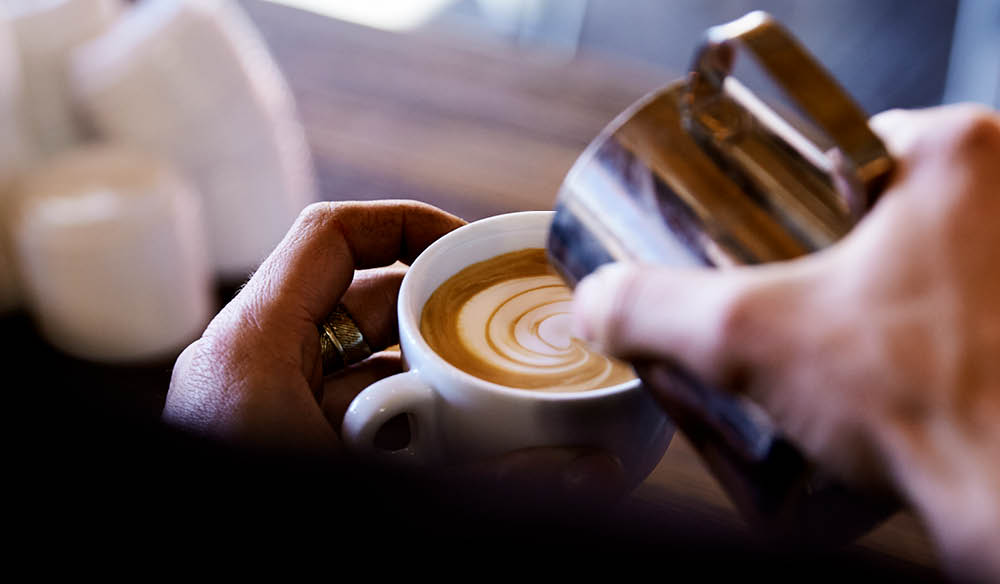 From its headquarters at the Prahran Market, Market Lane has been a trailblazer in sourcing top quality beans which it roasts in small batches. The focus is coffee, with a few other treats, at its five stores, including the Queen Victoria Market, two CBD locations, and Carlton. Shop 13, Prahran Market, 163 Commercial Road.

Wide Open Road is a roaster, coffee lab and cafe that is the definition of Melbourne’s hipster culture inside a converted 1950s warehouse plastered with paste-up street art. Specific house blends are designed for drinking black or with milk, while some of Melbourne’s most inspired cafe food comes out of the kitchen. 274 Barkley Street, Brunswick.

Located in a sprawling former auction house, Auction Rooms offers a serious coffee bar and a funky food menu that you can enjoy in a range of interesting nooks. 103-107 Errol Street, North Melbourne.

Coffee cupping is a practice used by coffee buyers and roasters to taste and score coffees side by side. It’s also a great way to develop your palate and break down aspects of the coffee’s taste. Seasoned cuppers assess body, sweetness, acidity and overall flavour. 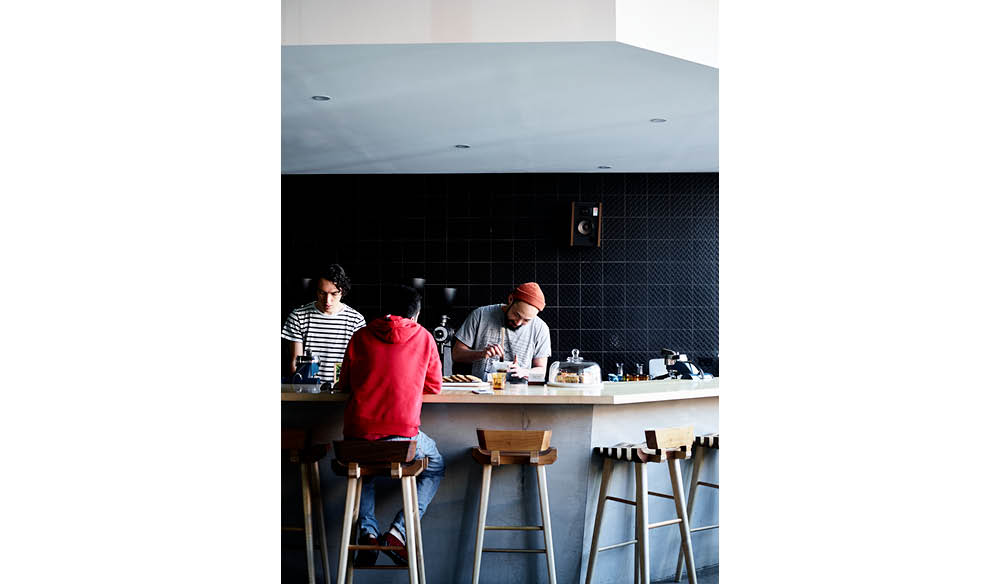 Pour the perfect coffee at Aunty Peg’s… with some help (photo: Mark Roper).

Aunty Peg’s is Proud Mary’s uber-cool engine room and coffee cellar door. This is where you can tour the working roastery, pick up beans and brew gear and, at its ground-floor bar, taste all manner of black coffees including espressos, AeroPress, cold drip and even an ale-like brew made by steeping ultra-premium Geisha beans in cold water. Free cupping sessions at 10.30am on Saturdays showcase staff favourites, and seasonal blends. To plunge in deeper, you can also book a barista boot camp through the Collingwood Coffee College at Aunty Peg’s. 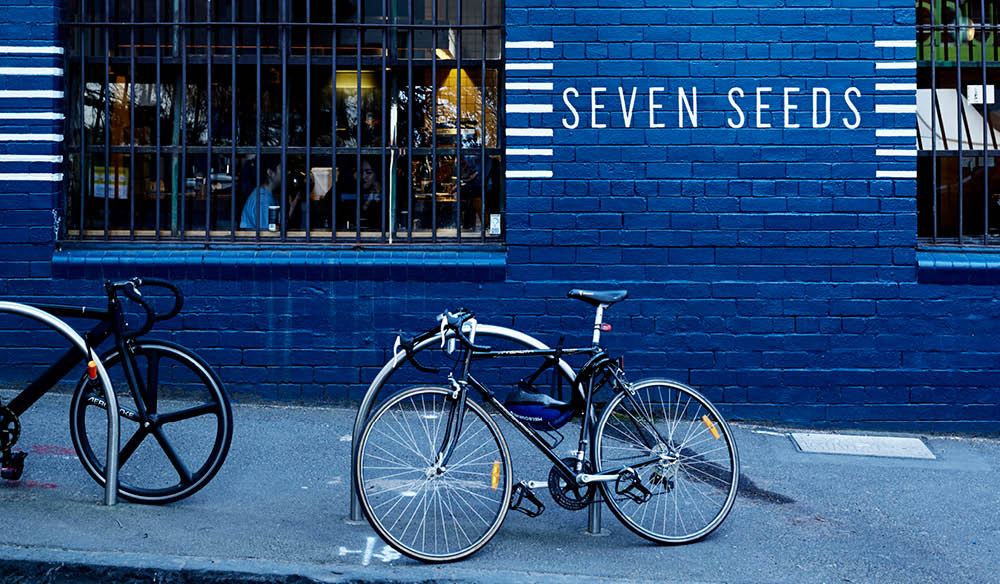 Seven seeds name comes from the seven coffee seeds that Baba Budan smuggled out of Yemen in the 17th century (photo: Mark Roper).

Seven Seeds offers weekly public cuppings at 9am on Tuesdays on a walk-in basis (no reservations) for up to 12 people. A $4 donation goes towards a charity called Women for Women in Africa. Each session is hosted by a Seven Seeds coffee roaster who runs through the cupping process.

Market Lane Coffee conducts public cuppings at the Prahran Market shop on Fridays (1pm–1.45pm) for up to six people. It also offers roasting and espresso and filter coffee brewing classes.

To go to the next level, take the $600 Sensory Module 1 course at St. ALi’s Sensory Lab’s training facility in Port Melbourne. Here you’ll learn the ins and outs of cupping protocol, and develop all your sensory and olfactory skills.