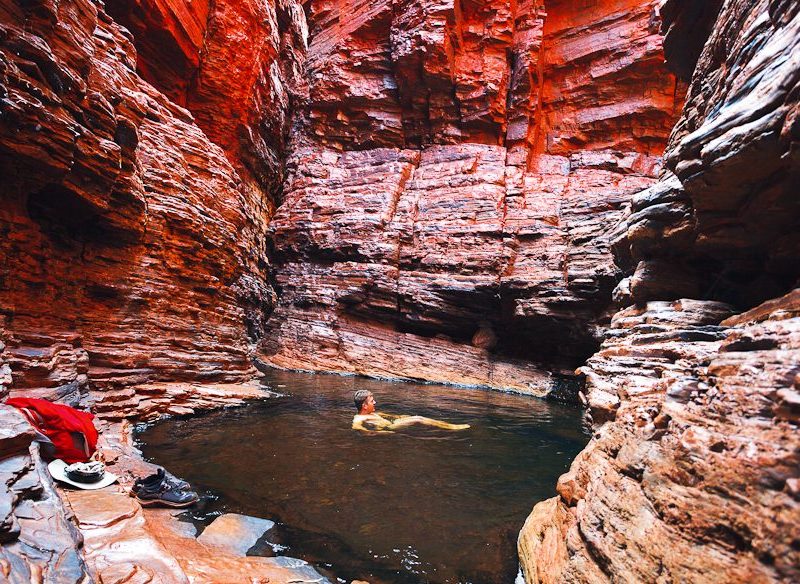 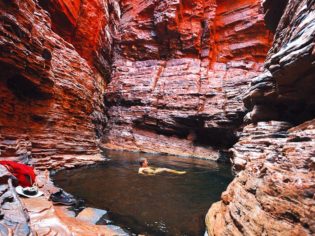 An eight-day, 3600-kilometre drive combining the best of outback WA with its glorious west coast (By Daniel Scott).

On the first morning of this trip, having driven our campervan out of Perth for five hours into the inky night the previous day, we awake in a layby in the middle of the desert. As the sun rises over the surrounding plains, a drowsy check of the map confirms that we are 70 kilometres from the nearest settlement, Paynes Find – home to 75 people and exactly one roadhouse.

We have an 800-kilometre drive ahead of us to reach Newman, in the southern Pilbara region. But the moment we rejoin the Great Northern Highway, which threads inland to the deep north-west, I am gripped by excitement.

On this road in remote Western Australia, I can feel freedom and relaxation washing over me. The emptiness of the terrain, the absence of traffic – we don’t see another moving vehicle for the first hour – and the distance from big cities is already releasing weeks of stress. 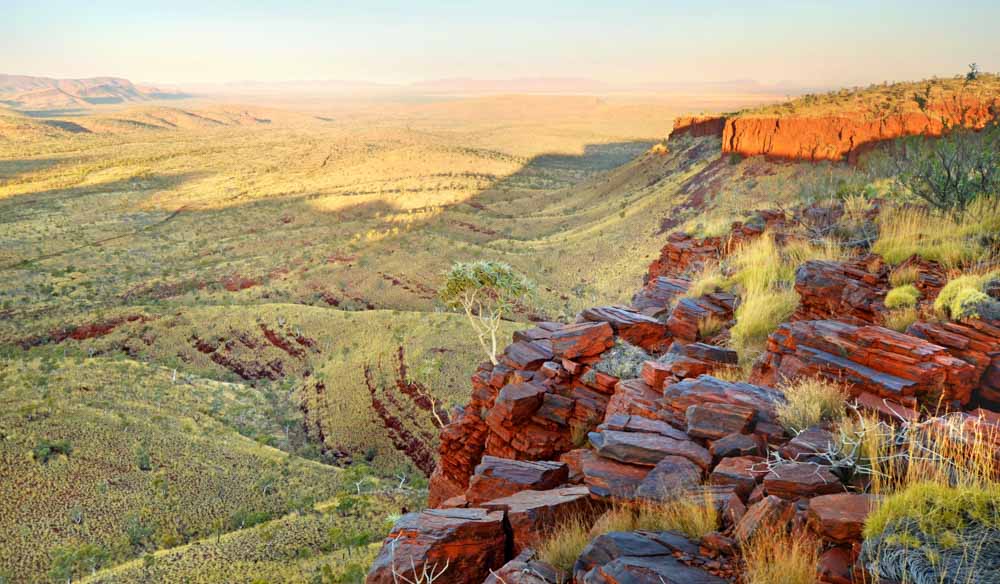 Red rocks in Karajini National Park, Western Australia are some of the oldest exposed rocks in the world.

Passing through Mount Magnet and stopping for lunch at Meekatharra, a dusty rural town steeped in mining and pastoral history, we begin adjusting to a slower pace of life and enjoying the laconic characters it attracts.

Back on the highway, there is something hypnotic about the landscape: a Roman-straight road cutting through flat redness disappearing into a distant haze, and, above it, a penetratingly-blue outback sky scattered with wandering white clouds.

After 10 hours on the road, we spot the iron-ore-rich hills around Newman, crossing the Tropic of Capricorn for the first time during the trip, 15 kilometres south of town. After resting and stocking up on supplies we leave ‘civilisation’ behind and head for Karijini, a 627,000-hectare national park that sits among the Hamersley Range in the heart of the Pilbara.

Karijini is among the oldest landscapes on Earth; some of the rock formations are well over half the age of our 4.5-billion-year-old planet, a sedimentary remnant of when the ocean covered this whole region. Hardened, pushed up and subsequently scored and sliced by rampant waterways as ocean levels dropped, the Karijini landmass eventually became a warren of chasms and high-sided ravines. The chance to see this primordial labyrinth and get close to some of that unfathomably old rock is the main inspiration for our long drive from Perth. 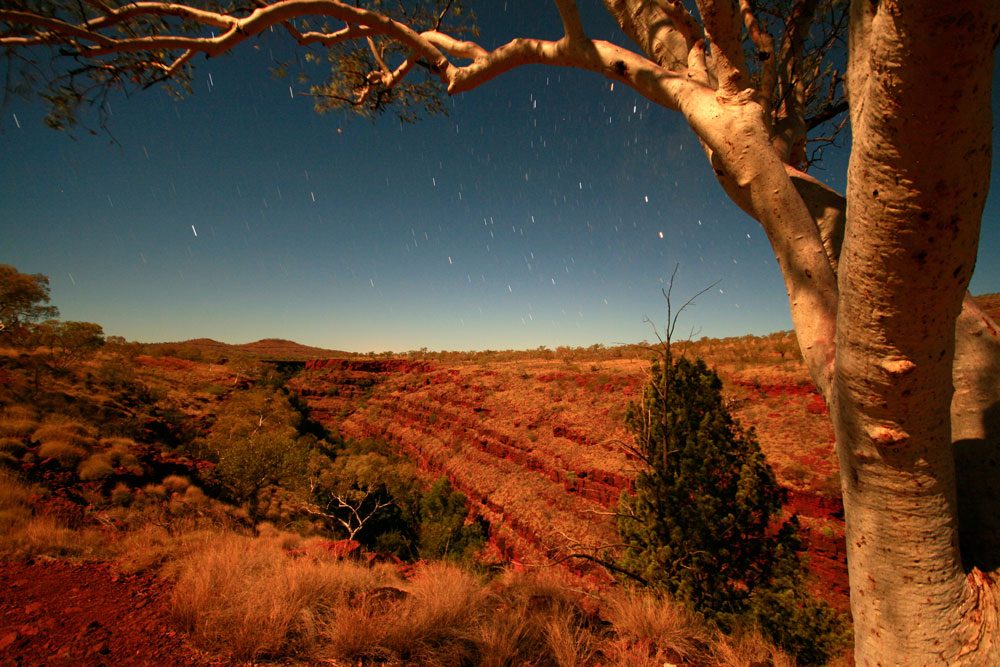 Nighttime at Karajini National Park in the Pilbara region in WA, by AT Reader Carl Drechsler.

Over the next few days, using a campsite at the Aboriginal-owned Karijini Eco Retreat as our base, we explore a succession of ancient canyons cleaved out of the folded Pilbara hills.

We journey to the centre of the Earth in Hancock Gorge, clambering down ladders fastened into its rock cliffs, then trekking, canyoning and swimming between its increasingly narrow 100-metre-high walls. When we emerge at Kermit’s Pool, an echoing water-filled chamber, we are surrounded by rock that is 2.7 billion years old.

We trek the four-kilometre return trip of Dales Gorge, the most Grand Canyon-esque of Karijini’s gorges, beginning at one sublime swimming hole, the emerald-coloured Fern Pool, and ending at Circular Pool, enclosed by a high rim of dark rock. In between, the creek bed is full of sunken gardens, shallow waterfalls and stacks of striped rock. In places the gorge walls rise up sheer, in others they are worn into chunky steps, climbing to the canyon rim.

Each night we return to our campsite overlooking the savannah, toasting the sunsets and watching the moon emerge as we eat dinner outside the van. Each morning the rising sun illuminates the red earth and brings glowing blue skies.

On our sixth morning we leave Karijini bound for the coast, a drive of over 700 kilometres. We stop only twice, at roadhouses, cross the Tropic of Capricorn again as we turn south and end our day at Bush Bay, near Carnarvon. 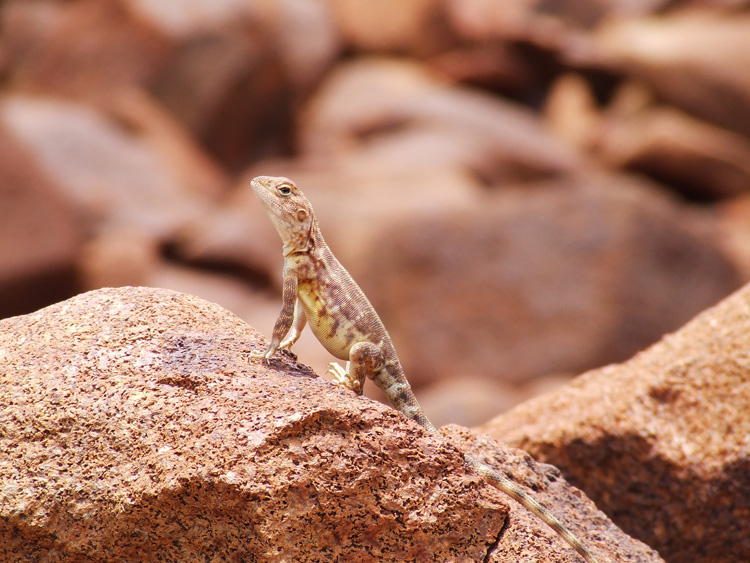 At the northern edge of Shark Bay, one of the few places on Earth to meet all four natural criteria for World Heritage listing, Bush Bay sits at the edge of a gently-rippling turquoise ocean. As we arrive, the west coast sunset begins turning the bubbling clouds out to sea purple and pink; the colours in the sky intensifying into a symphonic crescendo of crimson, red, gold and silver.

The next morning we visit Hamelin Pool, in Shark Bay’s south-eastern corner. Here a collection of mushroom-like stromatolites, closely resembling the micro-organic origins of life on Earth, poke from the shallows.

There are more natural wonders further south at Kalbarri National Park, where the Murchison River has carved loops and Z-bends in the sandstone hills as it heads for the sea. We stretch our legs on an eight-kilometre walk around the rim of Murchison Gorge, pausing at Nature’s Window, a hollowed rock that frames the winding river below.

On our final day we take in Kalbarri’s coastal section where the ocean has smashed away at rocky shores creating points, islets and natural bridges. Then, after driving south for much of the day, we time our arrival at the Pinnacles Desert in the Nambung National Park, near Cervantes, to perfection. Thousands of strangely shaped limestone pillars and stacks rise from the coastal dunes, throwing jagged shadows across the desert at sunset.

Aborigines thought they were dead warriors turned to stone and 17th-century Dutch sailors, who were the first Europeans to visit this coast, assumed they were the ruins of a lost city.

We still have a three-hour drive to return to Perth but we dwell among these eerie sculptures until the dusk light drains away.