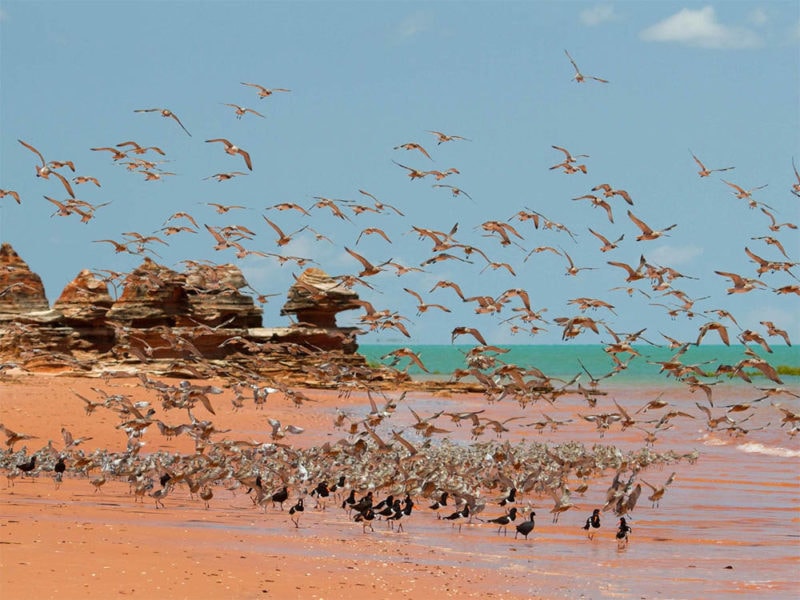 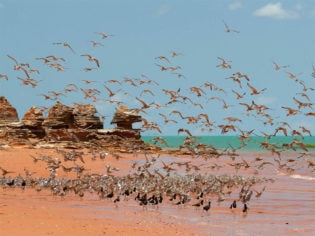 Here’s what to look out for in Broome when you want to get really wild.

Broome is unlike anywhere else in the world. It’s at least 2000 kilometres from the nearest capital city, bordered by the aquamarine waters of the Indian Ocean and the creeks and mangroves of Roebuck Bay.

Living among this exceptional landscape is a breadth of varied wildlife. A visit to Broome will bring you face-to-face with some of the rarest (and most adorable) fauna in the country – including some species that are completely unique to the region.

From snub fin dolphins to blue-tongue lizards, let us introduce you to the best wildlife experiences in Broome.

Prepare to witness the largest whale migration in the southern hemisphere. It’s estimated that around 40,000 humpback whales travel along pockets of WA’s coastline (also referred to as the humpback whale highway) each year. These giants can grow up to 19 metres in length, weigh up to 40 tonnes, and typically travel in pods.

One of the best areas to spot them is off the nearby Kimberley Coast – specifically within Camden Sound Marine Park. Back in 2013 the state government established this park to protect the largest humpback whale nursery in the world. Within it, the whales give birth in calm, protected waters and build up blubber to prepare for their return journey. You’ll also find pilot whales, pygmy killer whales and snubfin dolphins frolicking in these parts.

Booking a tour with Broome Whale Watching is your best bet at seeing these creatures in the wild. Whale sightings are generally guaranteed between July and September and many cruises have a marine biologist on board to provide all the facts and information you need about the environment and the whales.

Alternatively, see the whales from the air on a scenic flight. While there aren’t any specifically for whale watching, you might get lucky! And you’ll get a great view regardless. 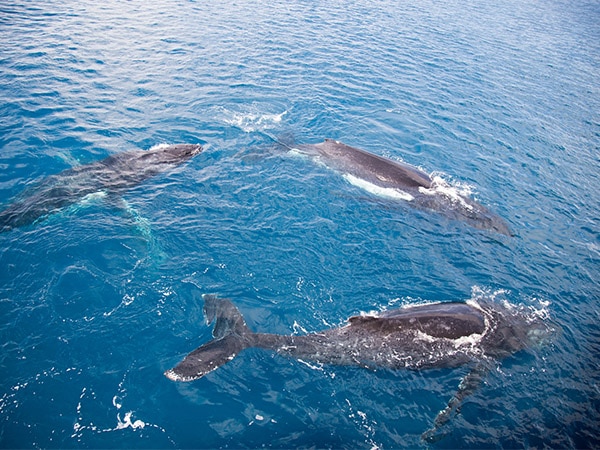 Humpback whales in the warm waters of the Kimberley

Not much beats a sunset stroll along a spellbindingly beautiful beach. Not much, of course, except for when you’re doing so atop a majestic – and charmingly friendly – mammal.

Saddle up on one of the trains of camels wobbling along Cable Beach as the sun sets into the Indian Ocean. Fall in love with the spectacular beach vistas, the softly dropping light, and that famed pace of life they call ‘Broome time’ – to which the camels seem well attuned.

Broome Camel Safaris and Red Sun Camels are the two operators in the area.

Hot tip: book early to avoid disappointment, and check your departure time as it can vary depending on the sunset and the tides. Most importantly, enjoy the ride! 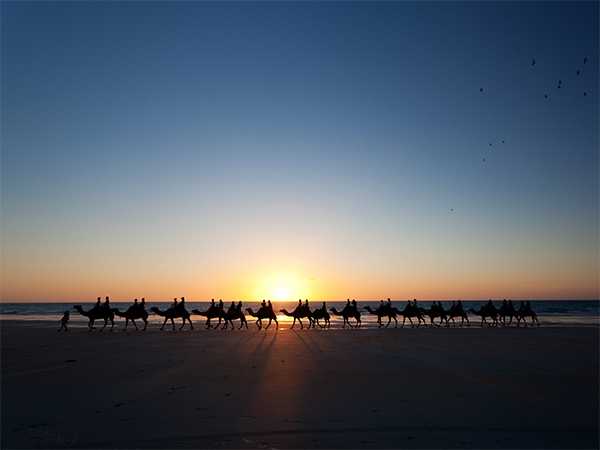 Measuring around two metres in length, the snubfin dolphin is much smaller than the more commonly seen bottlenose, and was only identified as a unique species in 2005. Named for its tiny dorsal fin, this species is a slow-moving marine mammal that also seems to run on Broome Time.

Broome Whale Watching are the only company on the planet to offer this experience all year long. Otherwise, plenty of other operators should guarantee you a sighting or two. 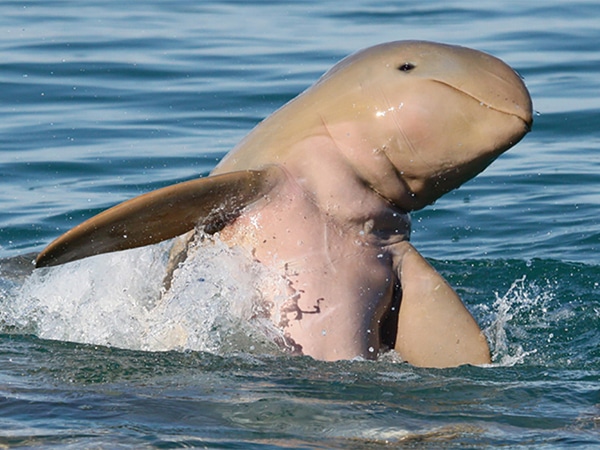 The adorable snubfin dolphin is native to Broome

Broome is home to an abundance of dazzling bird species – many of which are native to the region. From the scavenging raptors to the stunning Gouldian finches and elegant shore birds, there really is no better place to discover the secret life of birds than here.

For novices, the Broome Bird Observatory is a great place to begin. Located in West Kimberley, these folks know everything there is to know about local species.

Roebuck Bay is another hot spot. This embayment is located at the base of the Dampier Peninsula, hosting hundreds of thousands of migratory shorebirds who rest and feed here after flying extraordinary distances; some up to 8000 kilometres without landing. Combine the soft sediments, huge tides and shallow coastline and you have the perfect recipe for vast and bountiful intertidal mudflats. These are jam-packed with invertebrate species, which sustain many local and migratory variants. 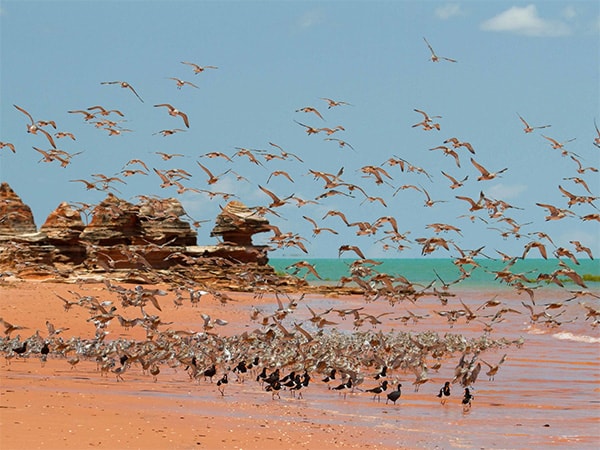 Broome is home to an abundance of dazzling bird species

On land, keep an eye out for the array of reptiles that call the bush and red dirt home. One of the most common Broome residents is the sand goanna, also known as a Gould’s monitor or racehorse goanna. While large, they are relatively harmless and are often seen scurrying across sealed roads.

The frilled lizard is another common reptile in these parts. They’re great at camouflaging themselves, making them a little tougher to spot while out and about. It’s the same story with blue-tongue lizards and Asian house geckos – so keep your eyes peeled.

Snakes are also found in abundance in and around Broome. There are four families of snakes to look out for; file snakes (one species), pythons (eight species), colubrid snakes (six species) and venomous land snakes (23 species). Some species are more venomous than others, so it’s best to do your research before you arrive. 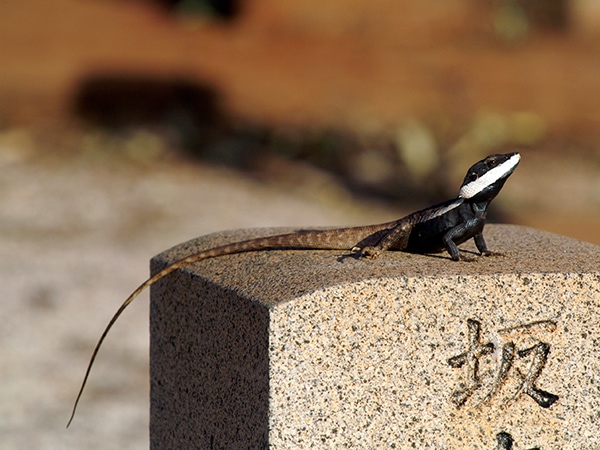 Believe it or not, Broome (and surrounds) was once the prehistoric home of many roaming dinosaurs. To delight your inner palaeontologist head to Gantheaume Point and learn about the various dinosaur species that once stomped around these parts.

If you want to a thrill, Broome Hovercraft offers a hair-raising ‘scenic and prehistoric’ tour. Hold onto your camera while you zoom across the bay to discover perfectly preserved dinosaur tracks. 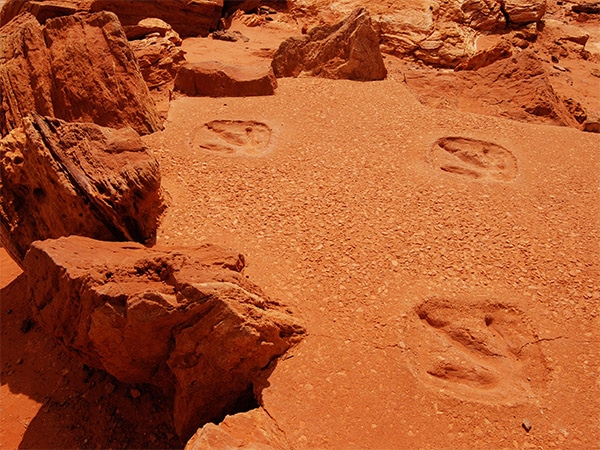 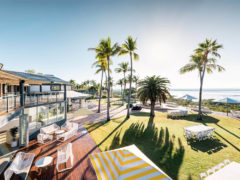 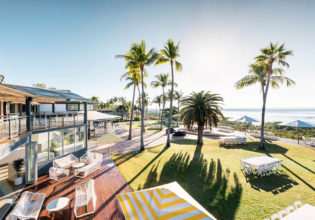 The best places to eat and drink in Broome

It’s said that 52 languages are spoken around Broome – which translates to a lot of different flavours in its restaurants and cafes. Breakfast T...