The perfect weekend in Esperance, WA 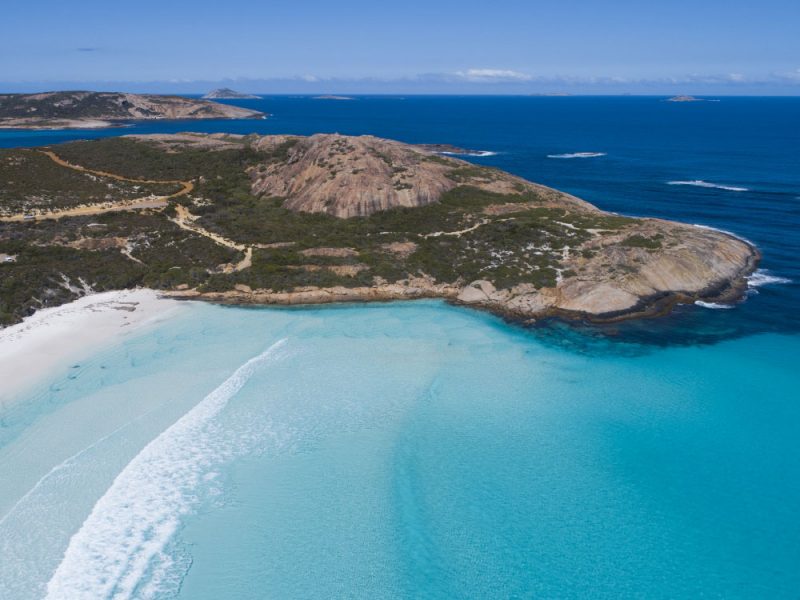 West of the Great Australian Bight, Esperance is almost too beautiful to bear. And it’s just far away enough to ensure it stays that way. Explores the town’s island archipelago, astonishingly white beaches and shift towards all things wellbeing.

I didn’t think any parts of Australia were snake-free. But a little island across from the isolated seaside town of Esperance makes that claim. There are still sense-jolting rustles and leaf crackles on Woody Island, but the creatures making them have legs: it’s a haven for quail, geckos and skinks. The only ones on the beach at Cape Le Grand

Armed with this knowledge, my bush hike to suggestively named Skinny Dip Bay switches from one of high alert to a safe and meditative wandering past slender eucalypt woodland, to a secluded corner of granite boulders tumbling gently into the sea. All alone, I feel at peace in this raw, yet friendly environment.

Woody Island is one in a chain of 105 isles making up Esperance’s dazzling Recherche Archipelago, and it’s the only one you can stay on. In the 1940s it became a leisure getaway and sheep-grazing site for the harbour’s tugboat owner until it was transformed into a protected nature reserve. Day trippers began popping over in the ’70s and the first, basic camping facilities were added in the ’80s. Until recently, solar-powered stays were decidedly spartan, but a recent overhaul that saw the arrival of balconied, interior-styled, ‘luxury retreat’ tents has opened up this little secret like never before. 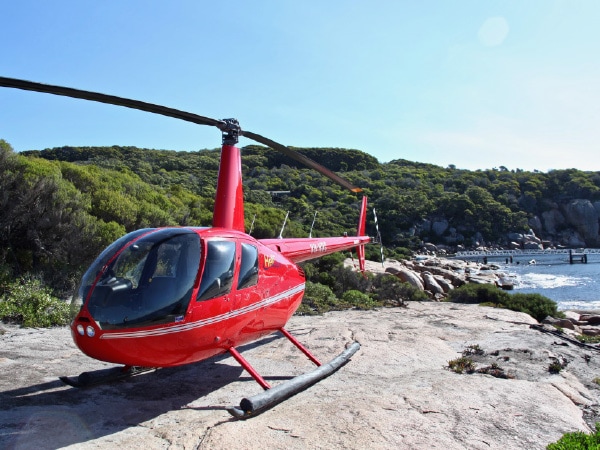 I rock up with requisite pizzazz, in a sexy red helicopter that lands on a granite mound beside gently lapping ocean. My route here is scenic, too, taking in Esperance’s lengthy esplanade, lined with 130-year-old Norfolk pines so tall and muscular they resemble lighthouses. Banking east, we zoom over Cape Le Grand National Park and its iconic Lucky Bay, the blindingly white stretch where kangaroos come to sunbathe and powdery sand squeaks underfoot. Every beach is astonishingly white, actually, with Esperance regularly splitting hairs with Shoalhaven’s Hyams Beach and the Whitsundays’ Whitehaven Beach over whose sand is whitest (of course, Lucky Bay claims to be the winner). 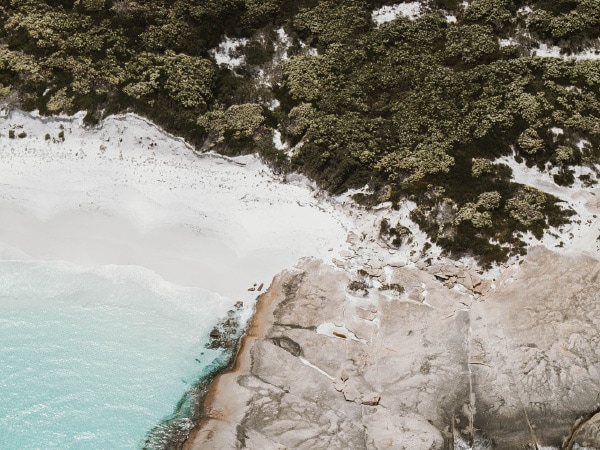 What Woody Island misses out on in the sand stakes – there’s barely any – it makes up for with wilderness. Birds create a constant symphony, she-oaks whisper in the wind and, as I plunge into the glass-clear ocean, dozens of fish jump from the water’s surface, their silver skins glinting in the sun. It’s brisk in the water this far south, but seaweed wafting undersea reveals geometric patterns, filigree stems and parrotfish, so I snorkel for as long as I can (there’s a Perspex-bottomed kayak for cold-adverse guests).

By sundown, I hike to Twiggy’s Landing, named after a pet Labrador lost at sea who turned up here three months later. I sit and search for returning shearwaters and little penguins emerging from the coastal scrub. Save for a couple sitting on the rocks below, I’m the only one around. On the way back, I explore further and find a bench seat with a plaque dedicated to “Tom, who loved the birds and quiet places”. 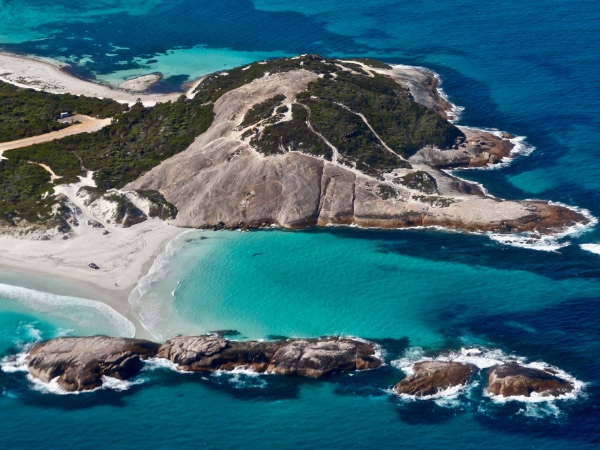 Island life is hard to part with, but Esperance calls me back. Of late, the town has been fashioning itself as a wellness getaway, a place to reconnect with nature’s beauty with a side of yoga or a main of homegrown produce. That it’s well off the beaten track adds to its offering – were Esperance nearer to a big metropolis (it’s nearly 700 kilometres from Perth but only a 1.5-hour flight), it would be overrun; instead, its easy pace allows mindfulness to settle easily across the shoulders.

Staying in the white-on-white, fairy-light strung Esperance Chalet Village also helps. The collection of A-frames cuddled by landscaped native gardens beside a stream couldn’t be more calming if it tried. Hammocks hang between tree trunks, white slatted Hamptons-style chairs cluster around fire pits and a very Instagrammable black Creek House hosts regular Pilates sessions. Beneath a huge statement light crafted from local abalone shells by the owner’s husband, I stretch and reach, wishing I was more rubber band and less bowl of jelly. Lithe Lisa Nicolaisen of Body Pulse Pilates says she started offering the thrice-weekly classes after noticing that Esperance’s holidaymakers were increasingly seeking wellness experiences. After running her first retreat in April, she hopes to hold more. 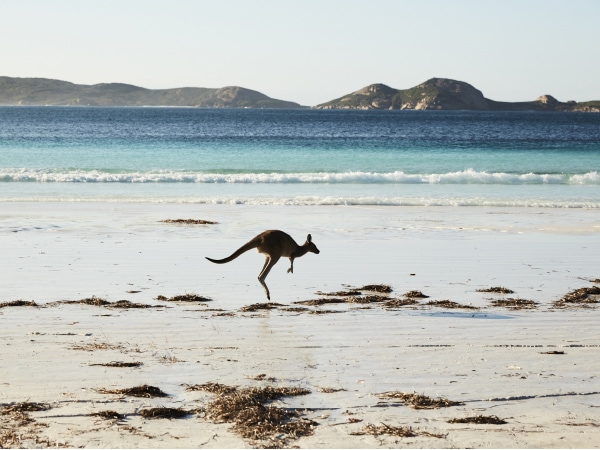 A kangaroo at Lucky Bay

Village owner Fiona Shillington is evidence of another Esperance trend: that of long-departed locals returning to roost. The truckie’s daughter moved away at 18, working in publicity at Channel 9 and Foxtel before she and her futures trader-turned-renovator husband and kids moved back in 2014. They bought the village on a whim and now manage 17 chalets, shacks, cabins and a cottage. “Tourism is in its infancy here and there’s so much scope,” she says. “The wellness space has been taking off. A lot of people love the sense of space and pristine environment and that there’s no one here. Even at the most popular beaches, like Twilight, you’re only sharing the sand with 15 others. To suck the clean sea air in is breathtaking.”

Like countless other locals I meet, Fiona names the national park 30 minutes’ drive out of town as a favourite escape. “I still go to Cape Le Grand and unwind, I never tire of it,” she says. “Climbing up Frenchman Peak, you feel on top of the world. It’s just beautiful, especially super early at sunrise; you can just lose everyone and the three-kilometre track is pretty easy going.” 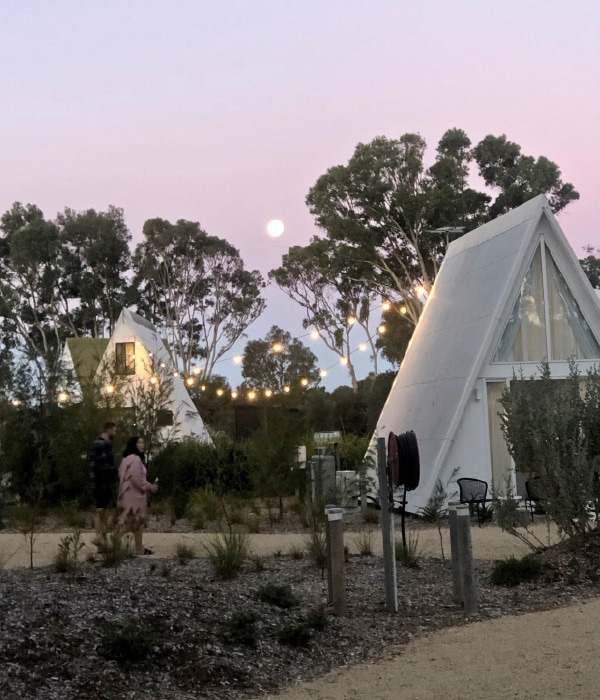 While not strictly wellness (although we’re sure we can spin it), Fiona also tips a visit to the smallest distillery in Australia, Esperance Distilling Co. There, FIFO (fly-in-fly-out) electrician David Price and his son James McCarthy-Price, another recently returned local, are tinkering away with their new 30-litre still – an upgrade from the 2l-litre unit they launched with in late 2020. The duo have combined David’s love of bush tucker with James’s environmental engineering qualifications and the time they’ve both spent in remote communities to create a sustainable gin brewed with native botanicals such as acacia and lemon myrtle. They’re currently experimenting with grass tree sap and strawberry gum, ethically foraged by a local Aboriginal woman, as well as kelp from Woody Island and sea parsley from Broome. 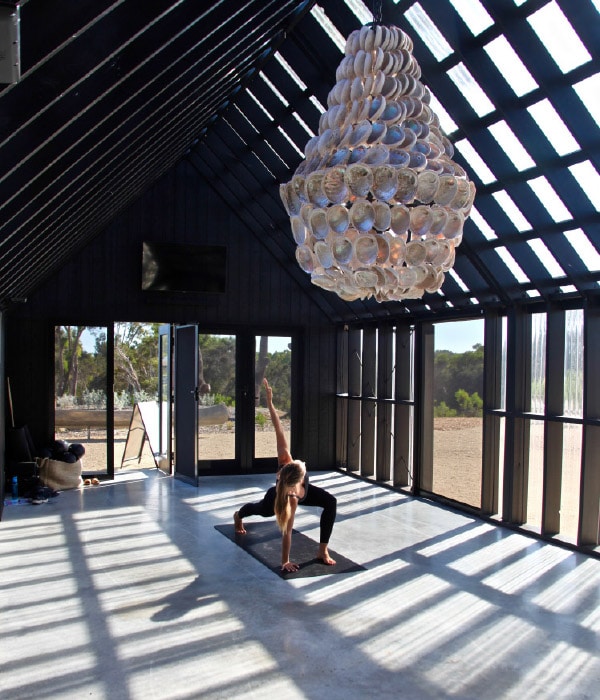 As David plays with flavours, James calculates the distillery’s carbon footprint; they aim to totally decarbonise the distillery as it grows.
Sustainability is also front and centre at Lucky Bay Brewing, a convivial shed filled with upcycled furniture and shiny tanks on Esperance’s outskirts. It claims to be the only brewery in Australia to use predominantly raw – rather than imported malted – barley, which requires far less energy and water. Agricultural researcher turned brewer Nigel Metz pioneered the process, enabling him to source grains from neighbouring farms. The frankly excellent beers are brewed with rainwater and zero preservatives – a green focus enforced by his environmental scientist partner, Robyn Cail. Fiercely passionate about the community, the pair create one-offs for regional towns and events.

Devout eco leaning is fitting in a place of such exceptional natural beauty. I’ve no time to head out to Esperance’s other main attraction, an otherworldly fuchsia-pink lake on Middle Island, but I fit in a trip along the 40-kilometre Great Ocean Drive to the west of town (parallel to a brilliant new bike trail), where perhaps the most spectacular white beaches laze. I stop at Blue Haven, a protected cove of translucent blue water and inhale deeply. In this moment, time slows and these few days away feel like a week. I leave restored but dreaming of my return. Soon. Dine on WA prawn pasta at Taylor St Quarters and find excellent coffee at DownTown Espresso Bar. For other-level baked goods, seek out town secret, Bread Local which is open from 3pm to 5.30pm on Fridays only for picking up orders placed throughout the week.

Arrive in style on Woody Island on a scenic helicopter flight with HeliSpirit and return by ferry.