The view from offshore

Australian Traveller reader Annie Hay has written a Reader Story on her experiences as an American visiting Cottesloe Beach in WA.

The view from offshore

AT reader Annie Hay, visiting Perth from the United States, explains the “dangers” of Cottesloe Beach to the folks back home. Little does she know, for Australians, it’s just another day in paradise . . .

One o’clock on a Saturday afternoon. Sand grains fly into the air and lash sunbakers, finding new residence behind ears, in hair, and on damp skin. The Fremantle Doctor has just arrived and beachgoers are showing subtle signs of new life. The “Doctor”– the cooling afternoon sea breeze – visits every afternoon, bringing with it a revitalising and invigorating life to the many people enjoying Cottesloe Beach.

“The beach is a hedonist’s paradise,” Australian poet Andrew Taylor tells us. “It offers us liberation.” Nowhere is this truer than at Cottesloe Beach. The clear, teal Indian Ocean collides with the white sand and members of every generation make use of the result. Strewn across the sand, people relax on towels, toss balls and engage in conversation. The air is clean, the pace is slow, and it seems as though the worries of the city, less than 14km away, are a part of a life far removed.

Located in the small suburb that is its namesake, the beach dictates the life of the people. Directly across from the main entrance to the beach are cafes, a deli and an ice cream store in which people of all ages sit in booths, bikini- and board short-clad, directly reflecting the beach community’s casual attitude. Along the beach is Marine Drive, a road frequented by Utes (Annie explains here that that’s a kind of Australian pick-up truck – Ed) laden with surfboards, men and women out for a run, cyclists or families taking the dog for a walk.

From its founding as a community beach in 1908 the area has only increased in popularity. The Cottesloe Volunteer Lifesaving Club was established that same year and has since aided in Cottesloe’s reputation for safety. “No-one has drowned in the history of Cottesloe Beach between the flags (of the swim zone),” says local Stuart Pierce, a lifesaver with 15 years of active patrolling experience, despite being just 30 years old.

Perhaps such a statistic is an explanation for the generational popularity. Toddlers play in 6ft waves while parents sit back and guard the family sand buckets looking unconcerned, confident in their child’s ability to find the surface. Young teens and upper school students prove their wave-riding prowess as they dive in for a body surf. Between 5am and 10am, prior to the “Doctor”, older men and women, as well as lifesavers and triathletes, swim out beyond the breakers for exercise.

Bee stings all over the body, all at one time, inflicted upon infant children? Apparently not a worry to the relaxed Cottesloe beachgoer.

Riptides, shark sightings and large shore dumps all happen right here on this family beach. In maintaining safety, the Lifesaving Club posts signs to warn swimmers of potential dangers. On one beautiful day a sign depicted a jellyfish, warning swimmers to “Be Cautious.” When questioned for an explanation, local Isaac Hough tells me I “needn’t worry, they don’t hurt much, just like a bee sting. Brush it off and keep swimming.”

It appears he’s right. Beyond the sign, waves crash into the shore, hurling body surfers into the sand. Mothers carry infant children beyond the whitecaps and squealing teen girls hold up their hair as they try to pass the wave break. There’s no apparent sign of concern for jellyfish at all. Bee stings all over the body, all at one time, inflicted upon infant children? Apparently not a worry to the relaxed Cottesloe beachgoer.

Most popular for teens and young adults, the beach is an epicentre for social gathering as well as an outlet for youth hormone. Upper school students flood the shores with eskies – or coolers – sports gear and tanning oil on most weekends. Boys throw (That’s probably meant to be “kick” – Ed) the Australian football among themselves, and over the heads of the sunbaking girls, who scream flirtatiously from their beach towels. “If the football lands in between a couple of girls, it wasn’t an accident,” explains Hough. “We throw (kick? – Ed) it there on purpose to get one of our mates to strike up a convo.”

Along with its position as a place of recreation and relaxation, for the young the beach seems also to be a middleman for the socially challenged.

As the sunset arrives, the Doctor returns to the sea. The fading light outlines the remaining beachgoers and a calm settles over the sand. Heading back to cars, buses and trains, a few boys toss the football along the sidewalks (or “footpaths” – Ed). Some remain in their bathers, others are wrapped in towels, but all seem to relish the few remaining moments of their day at the beach before returning to the city and the reality of daily life. 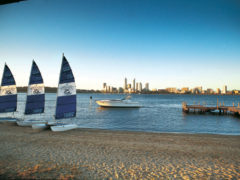 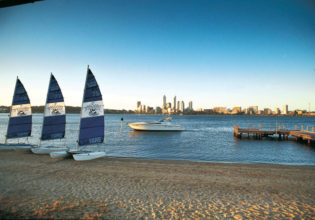 Everything you need to know about holidaying in Perth

You can’t understand Perth, the most isolated capital city in the world, without first getting to know its iconic River. Ron Crittal invites you on ...