One for the road – Our cocktail recipes of the month 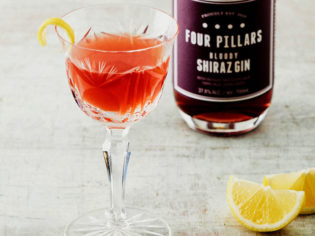 The cocktails that put the most considered Australian drops to good use, with cocktail recipes from the best bartenders in the country.

The cocktails that put the most considered Australian craft spirits to good use, with recipes from the best bartenders in the country.

Four Pillars is combining two of the greatest things on the planet, gin and shiraz, to make them even better. And you can make its Bloody Shiraz Gin better still with this cocktail from its ambassador and ‘bartender at large’, Sammy Ng; make it yourself or drop into the Four Pillars distillery bar in Healesville, Yarra Valley to sample. “The original jasmine cocktail is actually a modern classic from the early ’90s. This recipe is equal parts gin, Curaçao, lemon and Campari. We modified this by replacing the traditional London dry gin with our Bloody Shiraz – it plays beautifully with bright citrus and a hint of bitterness,” says Ng.

20ml Dry Curaçao (or any other orange liqueur, such as Cointreau)

Add ingredients into a cocktail shaker with ice. Shake and strain into a chilled coupette glass and garnish with a lemon twist. We all love an espresso martini, but there is another way to sneak a caffeine hit into your evening soirée while also becoming something of a trailblazer for fine coffee liqueurs.

Drop into the cosy bar at Annata in Sydney’s Crows Nest, and bartender Christian Blair will arrange an introduction.

“This variation on a negroni uses Mr Black Cold Drip Coffee Liqueur as the driving flavour,” he says.

“Cold drip is said to highlight more floral flavours from the coffee it’s made with, so in this instance sweet vermouth is added to intensify the dark fruit character, Campari to enhance the bitterness, and tequila to bring up the sweetness.”

Stir, strain into a coupette, garnish with an orange twist.

Last year gin was all the rage – this year, vermouth is in vogue.

Indeed, such is the newfound appetite for vermouth that a dedicated bar Banksii, named after botanist Sir Joseph Banks, opened last year at Sydney’s Barangaroo to satiate the city’s desire for the botanical-infused fortified wine.

Causes & Cures is a great example of the stuff and is made down in Healesville, Victoria, its name harking back to vermouth’s original use as an Italian medicine.

“Causes & Cures Semi Dry White was one of the first Australian vermouths I tried and it’s still one of my favourites,” says Banksii’s sommelier Rebecca Lines.

“It’s bold and has a good depth of flavour due to the viognier grapes and the use of oak in the process of making it.

There are plenty of orange notes from the Seville oranges they use, so I’ve used it as a replacement for Cointreau in the classic Side Car cocktail, also switching lemon juice out for orange juice.

The faintest hint of cinnamon adds to the winter appeal of this cocktail.”

Rub the rim of a cocktail glass with orange, then dip in sugar mixed with a tiny pinch of cinnamon.

Place a sugar cube in a Boston glass and add Cognac, vermouth and orange juice.

Muddle until sugar has dissolved, add ice and stir until condensation forms.

Strain into the pre-prepared cocktail glass. You wouldn’t normally associate vodka with the hot climate of Australia, but nevertheless we found this lovingly crafted drop in Tasmania, a state that seems hell-bent on becoming the craft spirit capital of the world.

We dropped into Kentucky Rain, attached to smokehouse The Tickled Rib (currently on the move to a new and improved location in North Hobart), to sample Hellfire Vodka from Hellfire Bluff Distillery.

“Hellfire is a potato farm and it uses its excess potatoes to produce this vodka,” says manager Lewis Rands.

“It operates with a ‘paddock to bottle’ ethos to produce a vodka in the traditional way, while reducing waste.

The cocktail is the combination of sweetness from the elderflower and tartness from the blackberry and lemon without taking away from the vodka’s unique taste.”

30ml Blackberry puree (made from 50g of frozen blackberries, blended)

Shake all ingredients with ice and then strain into a tall glass filled with fresh ice.

Garnish with a mint spring.

Cocktail: A Walk in the Woods A Walk In The Woods

If there was ever a spirit that embodies the place of its conception, it’s Brookie’s Byron Dry Gin.

Eddie Brook and master distiller Jim McEwan have harnessed the botanicals  – including native ginger and Dorrigo pepper – of Eddie’s family’s property, which includes a lush stretch of rainforest in the Byron hinterland.

You can sample it at nearby Harvest, where beverage manager Sam Curtis has turned it into A Walk in the Woods.

“Refreshingly subtle and very drinkable, I created this drink on the opening night of Eddie’s distillery,” says Sam.

“Eddie and his father were kind enough to take us for a walk through the rainforest that they planted 30 years ago.

It was a genuinely moving experience.” Take a walk in the woods yourself with this recipe.

One sprig rosemary, half the leaves removed and set aside

Shake vigorously for 15 seconds then strain into the cocktail glass.

To garnish, slice the remaining apple into a fan shape.

Using a toothpick, pierce a hole through the apple fan and insert rosemary twig into the hole.

Squeeze ﬁnger lime balls on top of apple fan and place in drink to serve. Lark Distillery has been at the vanguard of Tasmania’s burgeoning whisky industry, with its founder, Bill Lark, inducted into the Whisky Hall of Fame last year.

Bartender Lam Tran from Melbourne’s The Kilburn knows how to make the most of them, with more than 600 whiskies at his disposal.

“This drink showcases the intricacies of the Lark Classic Cask; something light enough to comfortably sip before dinner and whet the appetite,” says Lam.

“Inspired by the classic Rob Roy cocktail, the Glenferri incorporates the elements of malt, sweet and savoury.”

Stir with a block of ice in a crystal rocks glass and present with a skewer of deep crimson maraschino cherries. Distilled in Sydney in three stills made from imported Scandinavian copper, the folk at Archie Rose have created a Signature Dry Gin that’s finely balanced but eminently complex, flavoured with native botanicals such as blood lime, Dorrigo pepperleaf, lemon myrtle, river mint, and juniper, of course.

It’s being put to good use by Charles Casben at his new bar Moya’s Juniper Lounge, a gin bar that he opened with his sister in Sydney’s Redfern in March.

With gins from all over the planet, Charles has put an emphasis on our home-grown best, Archie Rose among them, in a cosy bar that pays homage to classic cocktails as well as some signature takes.

“The Bronx is an old drink that was arguably invented at the Waldorf Astoria in Manhattan in the early 20th century by a young bartender who didn’t drink, but nonetheless had a talent for mixing,” explains Charles.