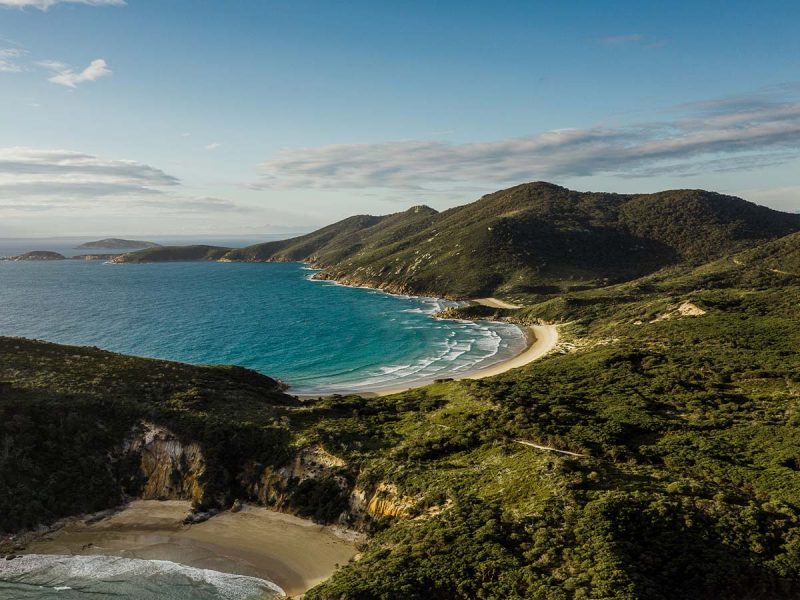 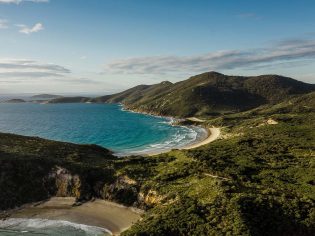 Not all road trips require four wheels. Sometimes riding freely atop your two-wheeler can be just as exhilarating, especially in Australia. Here are six of Australia’s best cycling and motorcycle trips to inspire you from our special 100 Amazing Road Trips around Australia series.

I’d say there are no two ways about it, except that there are: a road trip to Armidale is ridiculously scenic. The first time we travel there is along Thunderbolts Way. Named in honour of the ‘gentleman bushranger’ who once roamed these parts, it twists, turns and careens through a scenic landscape marked strikingly by the unreal landscape of the Barrington Tops and invitingly by pretty, historic towns. 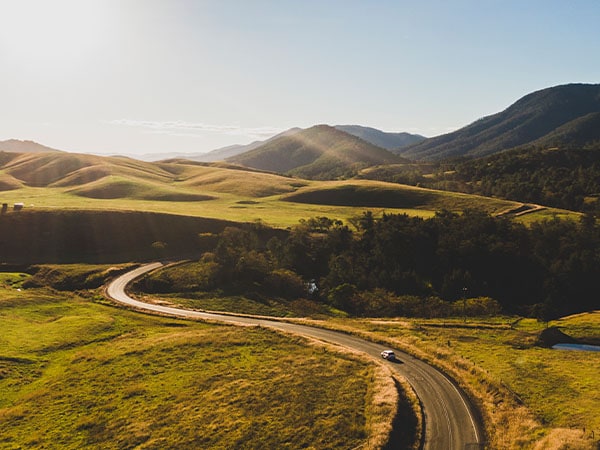 In Walcha we look out for sculptures that comprise its open-air gallery and in Uralla we stop at The Alternate Root Cafe, admiring the original pressed-metal ceiling, deliberating over the inventive menu and perusing the wares made by local creative types. There are diversions along the way: to the eclectic Dobson’s Distillery, with its cinematic speakeasy vibes in the sleepy village of Kentucky, and to the pure air, walking trails and waterfalls of Oxley Wild Rivers National Park – a rugged gorge country that falls away dramatically from the gentler swathes of the tableland, the Great Dividing Range’s highest. 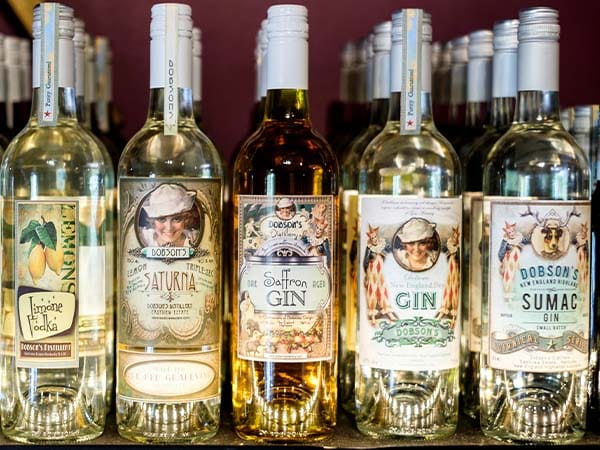 Another time, we travel to Armidale from the quirky riverside town of Bellingen along the true-to-its-name Waterfall Way: ascending up into the mist-shrouded rainforest and stopping to go back in time at Dorrigo National Park, part of the Gondwana Rainforests of Australia World Heritage Area. 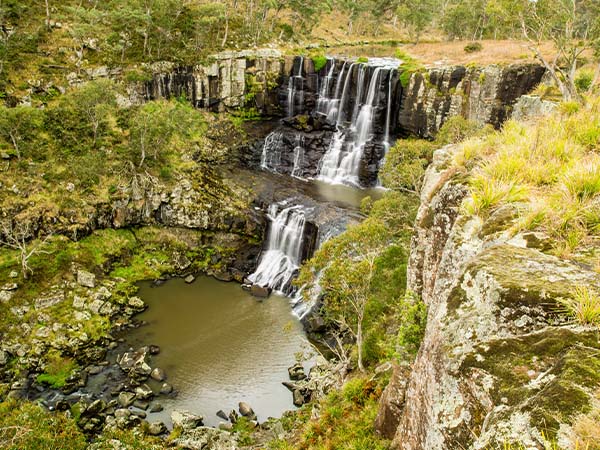 We make our way to the true-to-its-name Waterfall Way.

Our destination, the lofty city at the heart of NSW’s New England High Country always packs a punch on arrival: with its wealth of cultural experiences, from the New England Regional Art Museum (NERAM) to historic Saumarez Homestead; and its cool but unpretentious pubs, cocktail bars and cafes including The Welder’s Dog, Charlie’s Last Stand and Goldfish Bowl. Combined with a stay in one of the country’s finest restored Art Deco hotels, Tattersalls, and its many outdoor pursuits it’s well worth the journey to get here. Even if that journey is reward in itself. 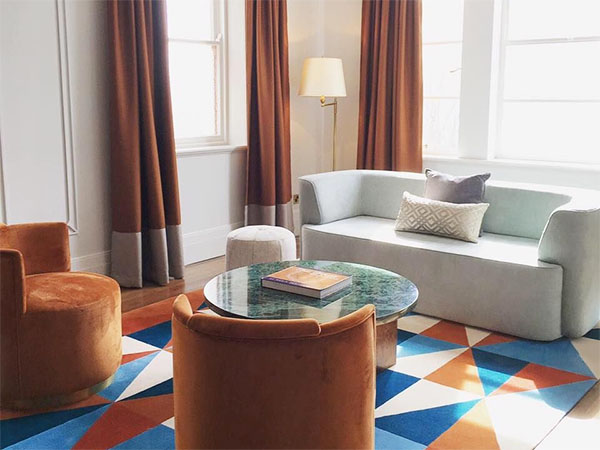 This most profound and adventurous immersion into tropical Australia is not beyond anyone with a motorcycle licence, a pinch of off-road riding experience and a hell-yeah attitude. A handful of companies, such as Cape York Motorcycle Adventures, offer fully supported, week-long trips that take riders to untainted wilderness and small settlements that most Aussies will never see (a support truck carries luggage or food). Burble through the Daintree, cruise the streets of Cooktown, and battle the Old Telegraph Track’s mythical ‘Gunshot’ en route to Australia’s extreme north. 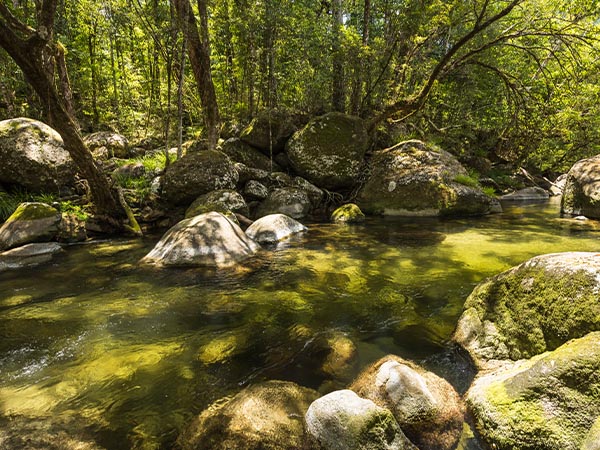 Cruise your way through the vibrant and verdant Daintree rainforest. (Image: Tourism and Events Queensland)

When night falls, slump into a camp stretcher next to a roaring fire next to a babbling tropical creek. You’ll earn every kilometre, through sand and water crossings, but don’t worry, the guides can tailor the route to your ability, and the pay-off and stories last a lifetime. 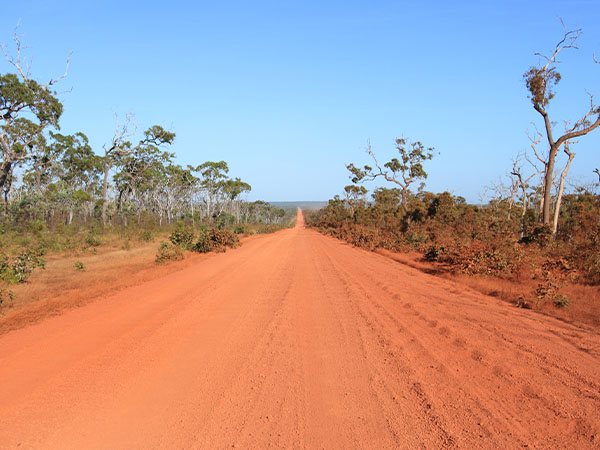 It’s difficult to imagine a better way to connect with the laid-back townlets and the green, green grass of Gippsland than by rolling through on arguably the region’s best multiday cycleway: the Great Southern Rail Trail. 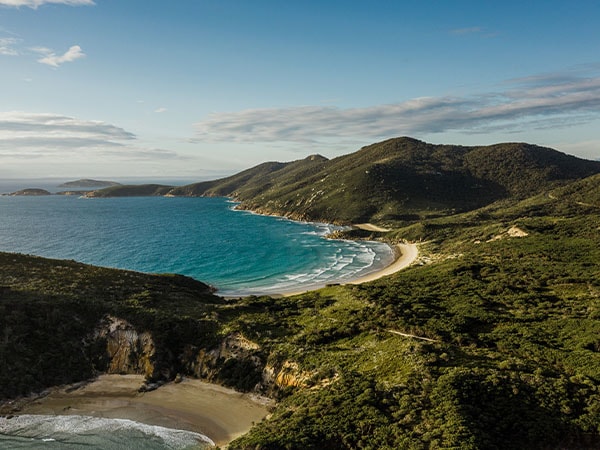 Roll on over restored trestle bridges and witness the Strzelecki Ranges emerge from the foliage. Linger in Meeniyan for its galleries and coffee-and-cake options (especially Moo’s) and the Meeniyan Pantry & Cellar, an upmarket deli selling cheese, wine and local smallgoods. Gentle Gippsland ups and downs will then deliver you further along to Fish Creek, an artist hub with a cheeky grin.

A six-kilometre ride from town, The Church House Gourmet Retreat, featured on Grand Designs Australia, is a worthy place to rest your gently throbbing thighs. The shapely Art Deco-style Fish Creek Hotel (with a giant fish perched precariously on its roof) is the spot to shoot the breeze with fun Fish-Creekians. 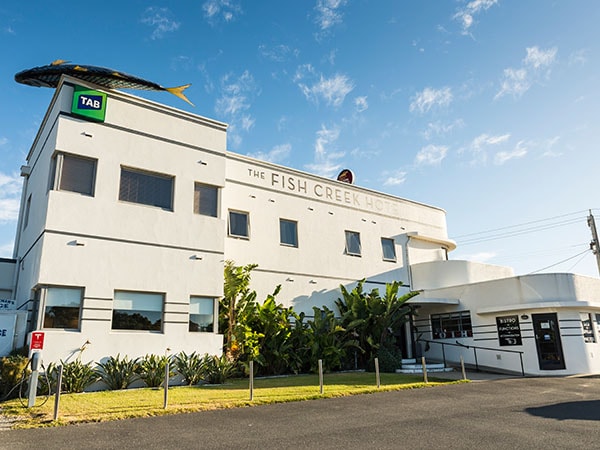 On day two, with Melbourne seemingly an aloof memory, ‘The Prom’ shows you her wild soul down in the distance all day. Leave the trail at the subtly signed Gurneys Cider (before Foster) to drink in the vistas (after a short, steepish ride up through fields) and head-lightening scrumpy cider made from wild apples. Freewheel through time-warped Toora before your tyres roll onto the long, long Port Welshpool Long Jetty and a rendezvous with your return lift (which can be provided courtesy of Australian Cycling Holidays).

On the edge of the escarpment a road sign warns of wiggles for seven kilometres. I grin under my helmet for the hundredth time since leaving historic Bothwell. Though, if that storm catches up to my BMW F 750 GS, it’ll be no joke. Lakes Highway is a scenic south-north route that weaves, at altitude, between countless lakes and shack-heavy fishing settlements. Raindrops speck my visor as I wind my way down from kooparoona niara – the original palawa name for Great Western Tiers – and hairpin through deep-green forest. Meander Valley is in sunshine. Lambs scatter and calves stare as I ride the backroads to my accommodation of Wandering Trout Taphouse in Mole Creek.

Bothwell to Mole Creek via Highland Lakes Road/A5 is 150 kilometres. 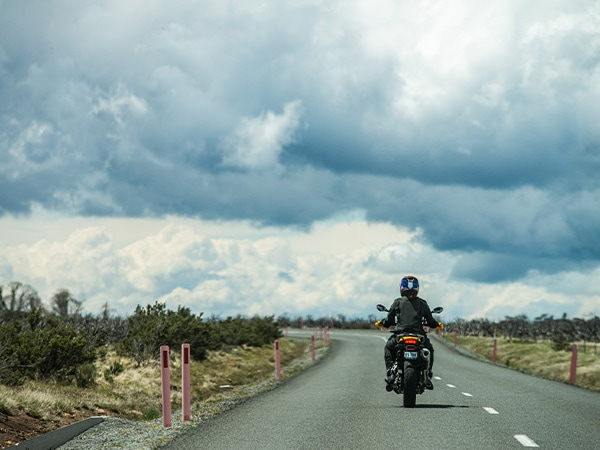 Raindrops speck my visor as I wind my way down from kooparoona niara. (Image: Chris Crerar)

Those with a penchant for pedalling through picturesque landscapes, preferably with the reward of a glass of something crisp at the end, should make tracks for South Australia’s Clare Valley wine region, which has established itself as one of the country’s most attractive cycling spots. It’s most famous for its Riesling Trail, which winds for 33 kilometres through vineyards, farmland and bushland punctuated by cellar doors and villages; it was established in 1994 from an old railway line that was damaged in the Ash Wednesday bushfires some 11 years earlier. Those looking for something a little less languid and more challenging can embark on the 900-kilometre Mawson mountain bike trail, which cuts through Clare on its way from the Flinders Ranges to the Adelaide Hills. 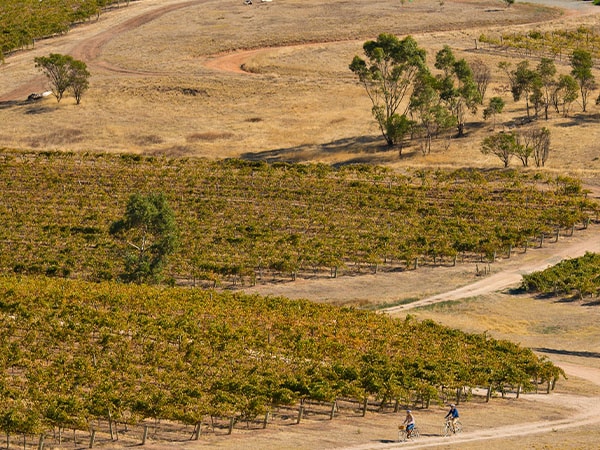 In a cottage at historic farming property Bungaree Station.

Spending even the briefest time exploring the area that stretches between Yass and the ACT will instantly make you understand why there is an “it’s mine, no it’s mine” debate about which region can rightfully lay claim to it: technically it is part of NSW’s Southern Tablelands, but the whole area is also affectionately claimed by Canberra. The reason? Because it’s a picturesque, productive cold-climate wine region, with a burgeoning gourmet foodie scene bubbling along nicely in the background.

The shining gem of the region is Murrumbateman, which is best explored on two wheels and pedal power (the sleek, accommodating Abode Murrumbateman has bikes for guests to borrow), cruising between cellar doors at Clonakilla, Shaw Wines, Helm Wines and The Vintner’s Daughter. Fill your basket with a few top drops and grab the fixings for a perfect picnic: treats from Robyn Rowe Chocolates, fresh produce from Murrumbateman Village Market (every second Sunday) and a sourdough loaf or a sausage roll at Clementine Bakery in Yass.

50 kilometres from Yass to Gundaroo. 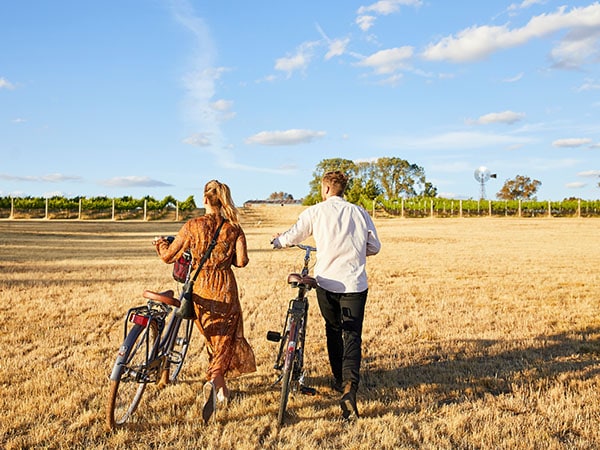 Pedal through picturesque landscapes of the Murrumbateman region. 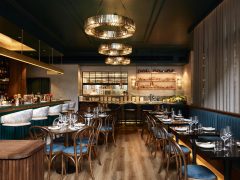 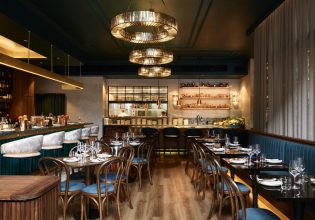 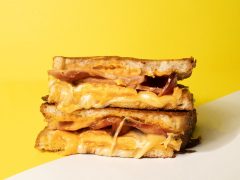 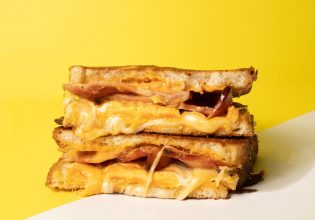 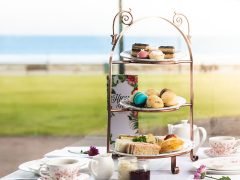 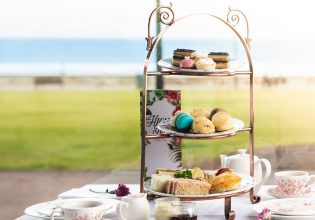 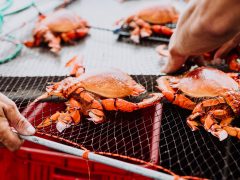 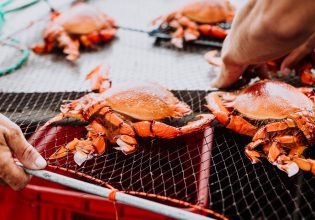