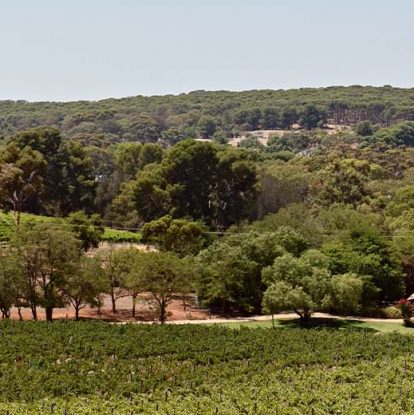 The Barossa Valley: one of the world's best wine regions

One of the world’s great wine regions, this compact valley made up of gnarled vintage vines, infinite cellar doors and sumptuous local produce packs a tasty punch. Tradition is as important as innovation in Barossa Valley.

From Mengler’s Hill Lookout, the entire Barossa Valley stretches out invitingly like a wrinkled quilt. Lush vine-covered hills and broad fields of golden grain are stitched together by creek beds lined with ancient river red gums.

On the edges of the valley, rosella parrots flit between trees in flashes of crimson and royal blue while thick bushland provides a haven for a range of native wildlife. It’s easy to see why early European arrivals thought they’d landed in paradise.

On the valley floor, you can still see the spires of the stone churches they built, interspersed with vast modern winemaking facilities.

Today there are more than 150 wineries in the Barossa and though Australia’s premier wine region is only an hour’s drive from Adelaide, it feels like another world.

This is a place where tradition is as important as innovation and community is paramount. Alongside winemakers, artisanal food producers use time-honoured techniques brought over by their ancestors and award-winning chefs take advantage of the natural bounty that has turned this small community of 35,000 people into a thriving food hub. 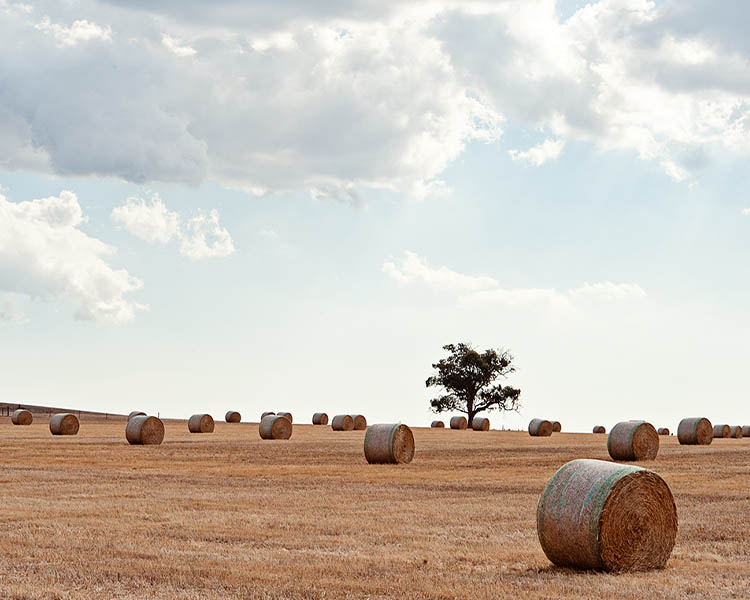 Early Prussian settlers brought with them the Lutheran religion, a strong work ethic and vines to plant on their mixed farmland. Some of the original 1840s plantings still remain and the gnarled vines are among the oldest in the world. Spicy old vine shiraz (syrah) is the hero variety here and full-bodied reds predominate, though you’ll also find honey-colored semillon and rich, creamy chardonnay.

Pilgrimage sites abound, and one of the best takes you to the bucolic Eden Valley sub-region. Here, the roads are lined with flowering gums and sheep graze alongside ’roos in vast paddocks dotted with outcrops of ruddy ironstone. Henschke’s evocatively named Hill of Grace vineyard sits in the shadow of the idyllic Gnadenberg Church and produces shiraz for Australia’s most iconic single vineyard wine. 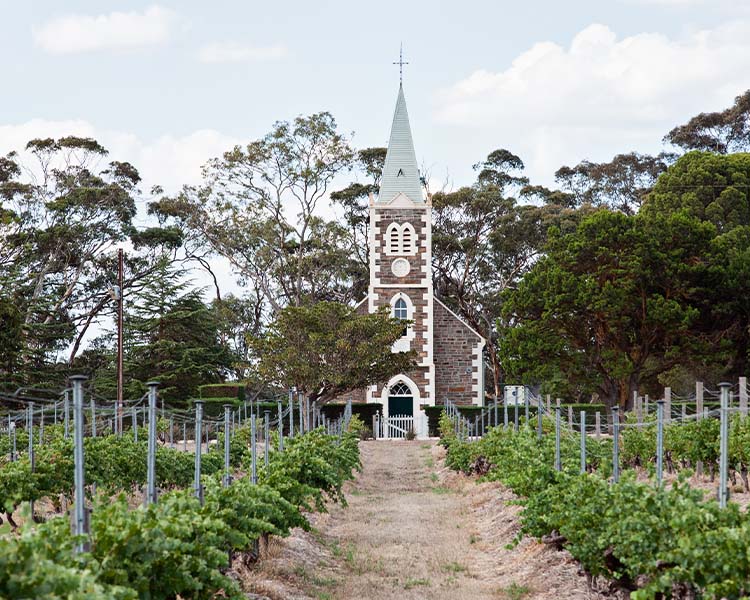 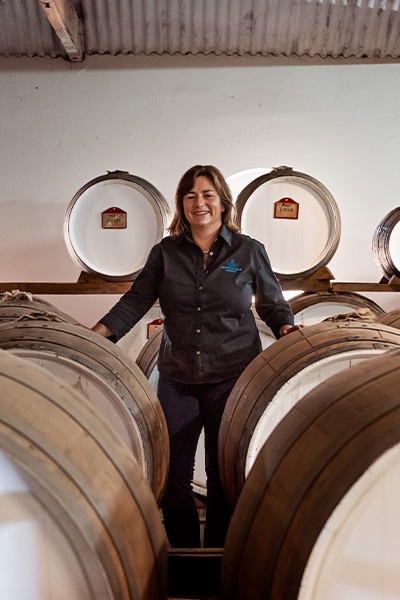 The nearby cellar door is on the site of the original family winery, and it’s not uncommon for visitors to find fifth and sixth generation Henschkes continuing the family tradition.

Seppeltsfield is no longer run by the Seppelt family, but their legacy is visible in an unbroken lineage of fortified wine that stretches back 143 years. Beginning in 1878, the best barrels of tawny from every vintage have been laid down for the enjoyment of future generations.

Walk through the Centennial Cellar today and you’ll be engulfed by a cloud of toffee and almond aromas created by the evaporating tawny. The first barrel was matured for 100 years before being tapped, but today it’s possible to sample the vintage from your birth year, significant family milestones or any other year that strikes your fancy. The oldest block of Shiraz vines at Hill of Grace known as the Grandfathers, first planted in 1860.

At the other end of the spectrum, first-generation winemaker Abel Gibson is at the forefront of the “new Barossa” movement. From the house where he lives with his young family, he’s rescuing neglected vines and making wines that challenge the stereotype of robust Barossa wines.

Under the Ruggabellus label, he produces complex, aromatic and thought-provoking blends that express the region’s minerality. Though not a household name yet, it’s a fair bet that one day you’ll find him on the honor roll in this valley of legends. Fields of golden grain are a pretty contrast to the vine-covered hills that are commonplace in the Barossa Valley.

One name that’s already on that list is Peter Lehmann. Grapes from across the Barossa command a premium, but it wasn’t always so. In the 1970s, oversupply led some wineries to renege on agreements with growers and Lehmann was ordered by his bosses to follow suit. He refused, honoring the handshake agreements he’d made, and eventually lost his job as a result.

To thank him for his support, people across the Barossa put downpayments on future vintages so that he could start his own label. Today, the winery he founded works with more than 140 local grape growers and his legacy of fairness (and brilliant winemaking) is still evident in this tightknit community.

Barossa residents have always prided themselves on their self-sufficiency, and that tradition can still be seen in the range of locals who smoke, pickle, cure and ferment everything they can get their hands on.

Homestyle pâtés, preserves and sauces by legendary Australian food identity Maggie Beer can be found in supermarkets across the country, but the best place to taste them is at her farm shop. While you’re there, stay for lunch at The Eatery or attend a cooking demonstration. 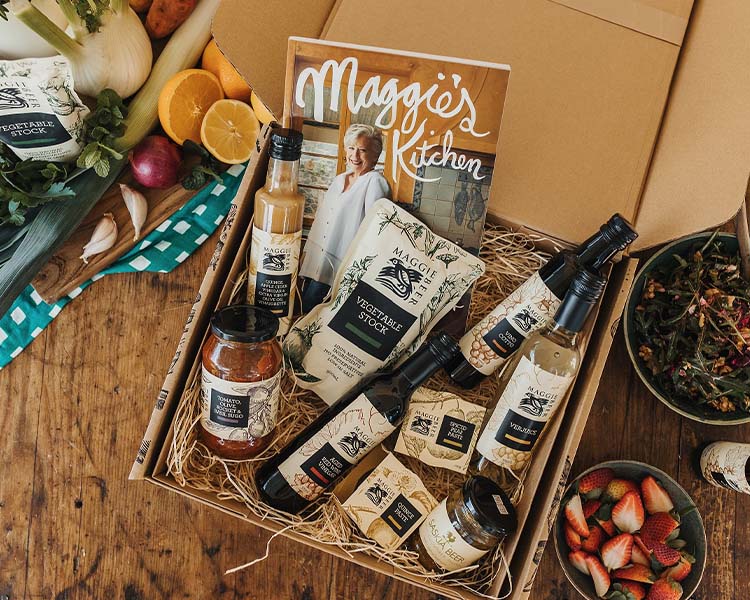 For something more humble, head to the Apex Bakery where legend says that the wood-fired scotch oven has burned continuously since it was first lit in 1924. Locals still come in every morning for fresh, slow-fermented baked goods and plenty of winemakers will attest to the Cornish pasty’s restorative powers as a hangover cure.

Visit the Saturday morning Farmers’ Market and you’ll find local residents rubbing shoulders with chefs as producers sell everything from eggs and vegetables to fine cheeses and whole legs of pork. Some chefs don’t even need to travel that far.

Hentley Farm offers a hyperseasonal tasting menu that changes daily as produce becomes available. As much as possible is grown onsite, and after lunch guests can see where it comes from by picking mulberries, visiting the quail hutch or wandering through the onsite herb garden. Neighbors often drop by with excess produce from their gardens, and that generosity is passed onto diners who often find themselves leaving with a jar of freshly made jam or sauce. Home Among the Gum Trees

It’s easy to visit the Barossa on a day trip from Adelaide, but spending a few days allows you to really understand the heart of the region. With that extra time, you can explore a working sheep station at Hutton Vale Farm and meet the seventh generation of farmers when they get home from school.

Stay in one of the delightfully restored stone cottages and you can watch the broad boughs of 500-year-old gum trees silhouetted against the rising sun from bed. Even better, listen to the melodious warble of nearby magpies amid clouds of steam from the charming outdoor showers. Stay in one of the delightfully restored stone cottages at Hutton Vale Farm.

At The Louise, you can watch the wind ripple the leaves of Peter Lehmann’s Stonewell shiraz vineyard next to the spacious suites. The elegant lodge is also home to several dining establishments, where it’s not uncommon to run into the winemaker you met earlier that day at a cellar door, or to taste a wine and find the sommelier offering to give you the winemaker’s phone number. Because the Barossa is more than just Australia’s premier wine region – it’s a welcoming community of people who take great pride in what they do. On the edge of Adelaide’s southern suburbs, McLaren Vale occupies an absurdly scenic position between the rolling slopes of the Lofty Ranges and golden beaches ringed by limestone cliffs.

120-year-old vines speak to a long winemaking history, but in recent years they’ve been joined by Mediterranean varietals that thrive with the maritime influence. Venture through groves of olives and almonds and you’ll also find a range of organic and biodynamic wineries turning this into Australia’s greenest wine region. The Basket Range and Kuitpo areas are hotbeds of natural wine production and though recent bushfires affected the 2020 vintage, all the cellar doors in the region are still open and even the rustic country pubs boast outstanding wine lists. Two hours north of Adelaide, the charming Clare Valley offers a relaxed tasting experience along a stunning 25-mile corridor. The cellar doors are rarely crowded, the farm gate stores are full of locally-grown produce, and vineyards overlooked by magnificent old gums produce outstanding zesty rieslings alongside richly flavored reds. Because of its compact nature, the entire valley can be explored on a cycling trail that passes by most of the region’s 50 cellar doors.