The five most beautiful ocean pools in NSW 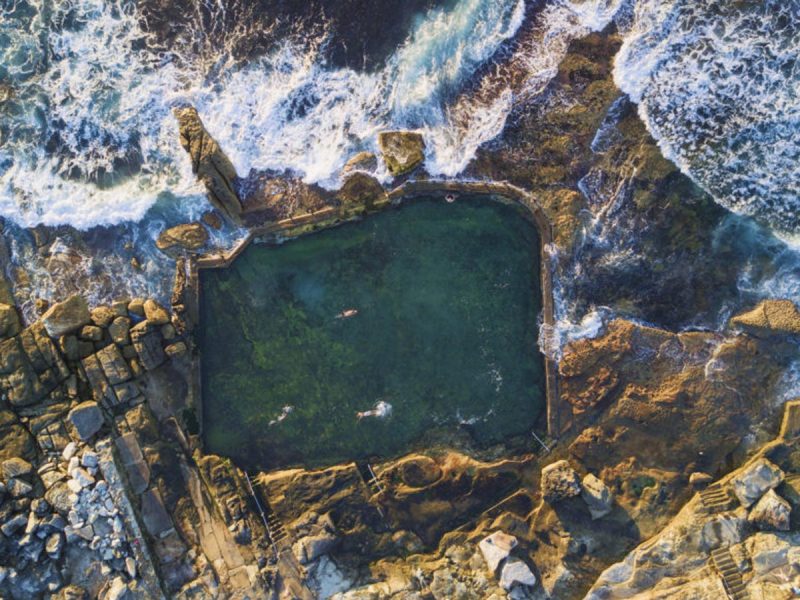 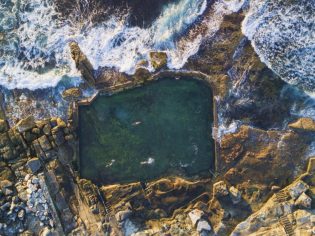 Need a dose of vitamin sea? Take a dip in some of the best ocean pools in NSW, which are dotted up and down the coast.

If your need to swim in the ocean makes you gravitate toward the coastline come summer, you should seriously consider a trip to NSW. The practice of stacking concrete blocks and rocks to cajole the ocean into calm pools took off in NSW in the late 19th century to provide somewhere safe to swim that was protected from the wild waves. Today, Sydney and NSW have the largest number of sea pools in Australia, with some 100 pools designed to serve the state’s population. Here are five of the best NSW ocean pools that have become like jewels set into the landscape.

You’ll find Bermagui’s Blue Pool in the Bega Valley Shire, just a little more than three hours from Canberra on the NSW South Coast. The sea pool, which keeps hold of its tidal waters with the help of a natural rock shelf and some strategically placed concrete is deep enough to get a few laps happening, while the kids can splash about in the adjoining toddler pool. And starting the day with a sunrise swim at the Blue Pool Bermagui in summer doesn’t get any more idyllic. Positioned dramatically at the base of a cliff, the famous Blue Pool is rated in the top 10 per cent of worldwide attractions, and is ranked six out of eight of the best ocean rock pools in the world. There are well-formed steps that lead down to the pool as well as a toilet, shower and change room. The platform around the rock pool becomes somewhat of a coliseum at sunrise, as locals gather to watch the sun rise over the sea. 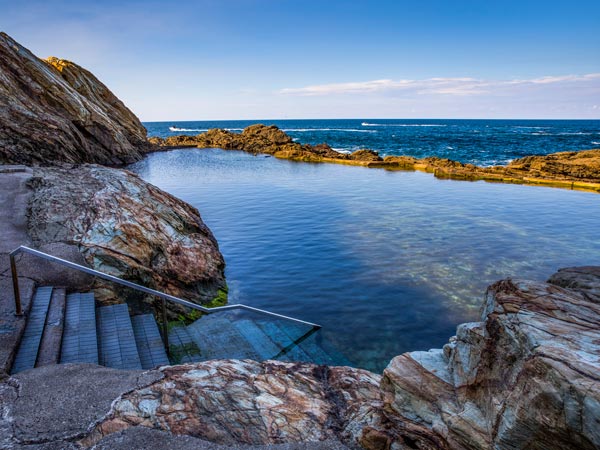 What we love: The Bermagui Blue Pool offers stunning coastal views from its position at the base of a dramatic cliff and is large enough to accommodate the many locals who converge here religiously to do laps. Follow @davidrogersphotography on Instagram to see snapshots of the Blue Pool and the locals who frequent it.

The Bondi Baths are rightfully famous for their incredible turquoise hues and impossibly glamorous sunbathers. But backtrack south from Bondi along the iconic coastal walk to Coogee and you’ll discover Wylie’s Baths, which was designed as a safe refuge for swimmers who wanted to avoid rips, sharks and hazardous waves. Established in 1907 by champion swimmer Henry Alexander Wylie, the baths were the first mixed gender bathing pools in Australia. And to this day, the baths are considered an asset, and treasured by Eastern Suburbs locals. Wylie’s Baths is located at the southern end of this iconic Sydney beach and surrounded by a rectangle of sandstone.  The picturesque NSW ocean pool has been classified by the National Trust of Australia and the yellow and blue-flanked deck perched above the pool on stilts is iconic. The baths are popular with all those who prefer a sheltered ocean paddle. 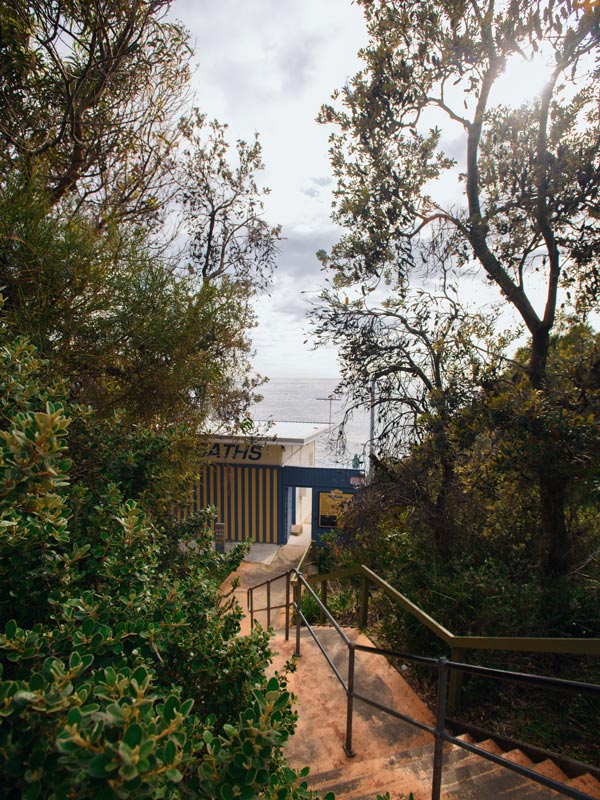 What we love: Wylie’s Baths, which is open 365 days of the year, follows the curve of the coastline. The thing to do here is grab a coffee from the kiosk and sit soaking up the warmth from the sun.

Long before these ocean rock pools were given heritage status, it’s believed the spot was used as a fish trap by the Bidjigal and Gadigal peoples of the Eora Nation. These days, the baths, which were constructed between 1938 and 1965, include a 50-metre, seven-lane pool that cost just £425 in 1938. The historic pool is a source of great local pride and was vehemently defended when public liability costs threatened its closure in 2002. Now safely extricated from all the red tape, the pools continue to provide a protected space to enjoy the salt air. When the sun is blazing down in summer, do as the locals do and enjoy the soothing monotony of churning out a few laps in a sea pool. The Entrance Ocean Baths include a 50-metre lap pool, a 22-metre pool and a children’s wading pool. There’s also a kiosk located onsite. 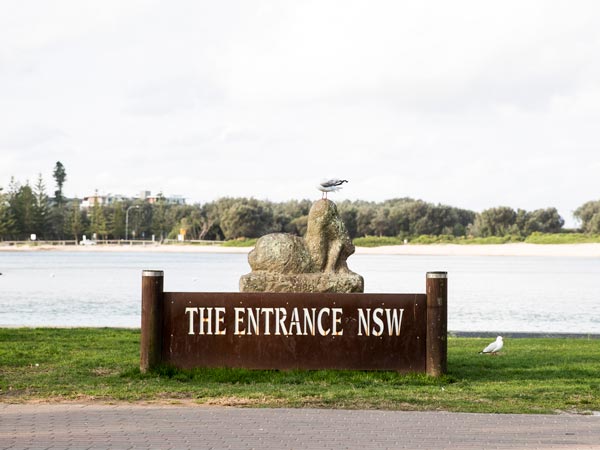 The Entrance is the pelican capital of Australia. (Image: Destination NSW)

What we love: That the pools are located on the Central Coast at The Entrance, the pelican capital of Australia and, if you’re floating on your back in the breeze you will likely see the birds spearing into the ocean from a great height. There is also a pelican feed that takes place at The Entrance waterfront at 3.30 pm each day.

Legend has it that the Coalcliff Pool was formed in 1921 when a few enterprising locals got their hands on a powder keg from a nearby mine and blasted the rock shelf at Coalcliff Beach. Unfortunately, Wollongong’s northernmost rock pool was initially deemed too small to accommodate the number of swimmers who wanted to use the facility. So the community, led by a progress committee, reconvened with the intention to expand the site. Five years and a stolen drainpipe later, the pool was complete for all to enjoy and has been ever since. It’s a particularly pleasing spot for an ocean frolic with views up toward the cliffs, which tumble down to the sea. This popular NSW ocean pool includes a pool for toddlers as well as a raised shower area and viewing platform designed as a great vantage point to watch when the big seas roll in. The Coalcliff Pool is totally secluded and includes steps at both ends. There is also a small toilet and changing facility near to the top of the path leading down to the pool, which is surrounded by a raised concrete deck. 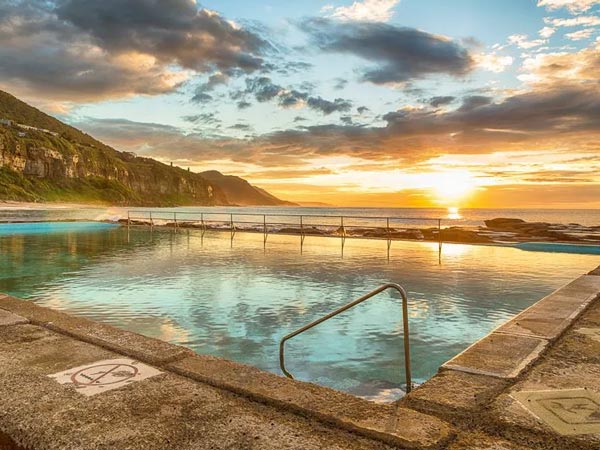 What we love: The blue-painted floor of the pool makes the colour of the water pop. Come down on a winter weekend to meet members of the Sea Eels Swimming Club and unlock a few more local secrets.

Many of Sydney’s pools were built during the Great Depression as a way to provide jobs and stimulate the economy. For those who might be a bit wimpy about swimming in the ocean, this pool provides both access to the ocean and shelter from the waves. While it can be like a washing machine during big seas, that’s part of the fun. This man-made pool takes advantage of the natural rock platform, with its rough-hewn edges making it feel more connected to the city’s coastline. The south of Sydney has a lovely cluster of rock pools, but the most spectacular, arguably, for a casual dip away from the swarms of Coogee and Clovelly is Mahon Pool at the north end of Maroubra Beach. The pool was built in 1932 by Randwick Council as an unemployment relief project. It became a popular place for children to swim safely in the 1940s and, to this day, you will find goggle-eyed locals from the Maroubra Seals winter swimming club, which was established in 1958. With free entry and parking, it’s perfect for scampering onto a rock and staying put for a few hours in the summer sun. 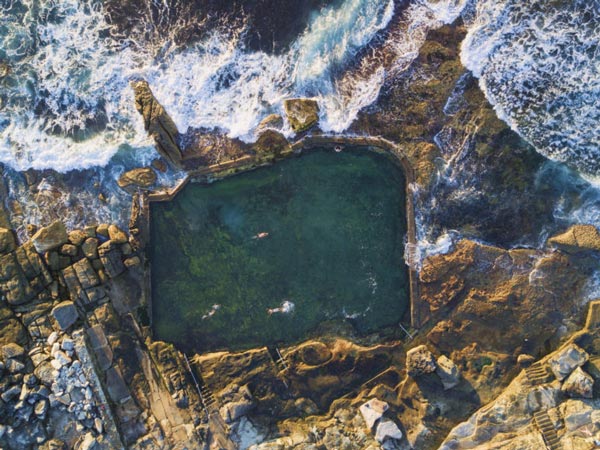 Find Mahon Pool at the north end of Maroubra Beach.

What we love: That the ocean pool is home to swimmers and sea life. Grab a coffee and cake from the nearby Grumpy Baker or Pool Café and stay and play all day.