The best Sydney pools & baths in each part of the city 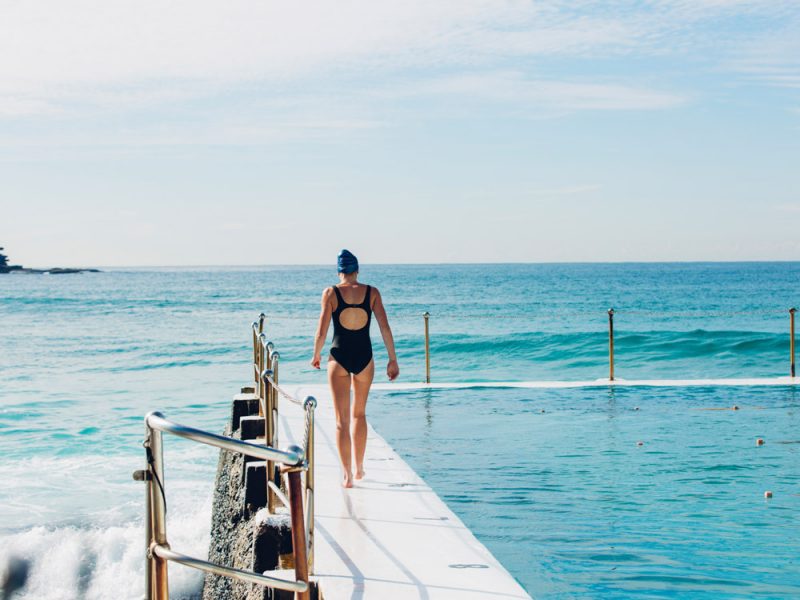 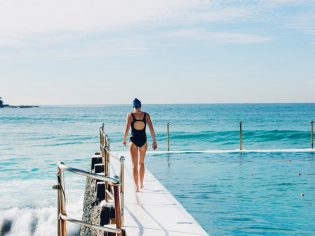 Nestled on the edge of the city’s coastline and harbour are a beloved collection of Sydney pools and baths that have been enjoyed by casual bathers for generations.

Cut into the base of cliffs and rocks at the edge of nearly all of Sydney’s beaches are the city’s unique rock pools. There are 30 between Palm Beach and Cronulla and together with over 40 harbour pools, make Sydney a Mecca for swimming.

Construction of the pools began in the late 19th Century, partly to protect swimmers from drowning and shark attacks, but many were also a conciliatory gesture by councils because swimming at beaches in daylight hours was illegal until 1903 and landowners didn’t want swimmers on beaches near their properties. Many more were built by unemployed labour during the depression and have been classified by the National Trust.

Although they may belong to a different era, most are free of charge, have changing and shower facilities and are well-maintained. Swimmers are rediscovering their charm.

Nestled into the side of the southern headland at Bronte Beach, the Bronte Baths attract everything from lap swimming grandmothers in floral bathing caps to skylarking adolescents and families. Alick Wickham, a Solomon Islander, astonished onlookers when he performed a “crawl” stroke there in 1901 – which later became freestyle.

Built in 1887, the pool is easily accessed via the Bondi to Coogee coastal walk and is always open, except during rough surf conditions. There’s a five-lane lap-swimming area with a maximum water depth of one to two metres and change rooms are available between 8:30am to 6pm. 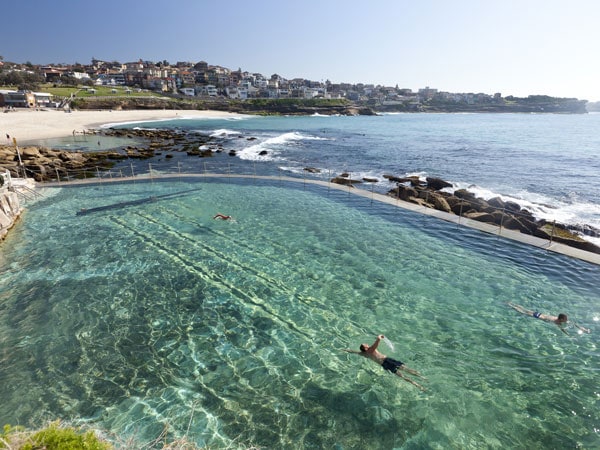 The Bronte Baths, built in 1887, are nestled into the side of the southern headland at Bronte Beach. (Image: DNSW)

Built in 1887 at the southern end of Australia’s most famous beach, Bondi Icebergs comprises a 50-metre eight-lane Olympic-sized pool and a shallow 20-metre pool suitable for children. It’s also home to four amateur swimming clubs, the most notable being the Bondi Icebergs where full membership can only be attained by swimming three out of four Sundays every month from May to September for five years.

“We are the Bondi Icebergs, The toughest men they breed, Happy and contented, Cold water’s all we need, We’re not soaks or crooners, We just sing as we drink our beer, So bring out all your schooners, ‘cause the ‘Bergs are here.” – Icebergs Anthem, written by Joe Wallace, 1940 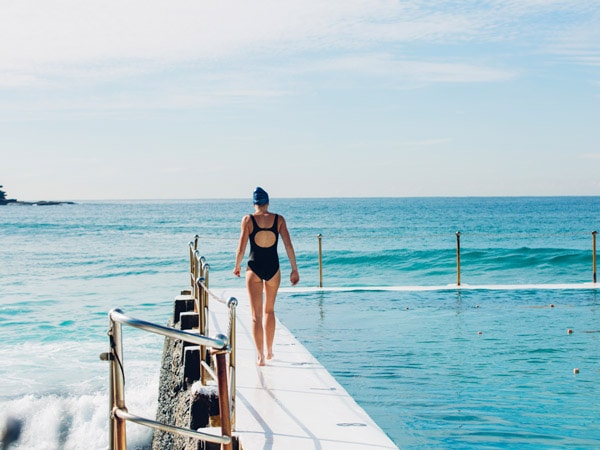 Bondi Icebergs was built in 1887 at the southern end of Australia’s most famous beach. (Image: DNSW)

Established by Henry Wylie, a champion long distance and underwater swimmer in 1907, Wylie’s Baths underwent extensive restoration in 1995-97 and was heritage-listed in 2003. Swimming there is like being in an aquarium; the walls and floor are covered in lichen and seaweed, and lap swimmers disturb schools of tiny colourful fish. The constant intrusion of white water at high-tide is a challenge, as the pool merges so completely with the ocean it’s like swimming in a washing machine on spin cycle. 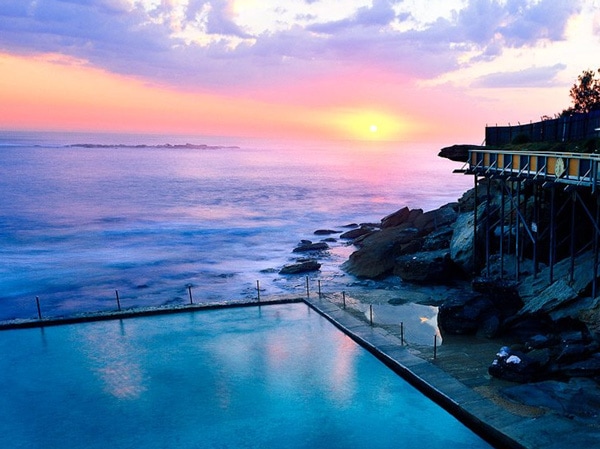 Just a stone’s throw from Wylie’s are McIvor’s Ladies Baths, dug into the existing rock shelf at the southern end of Coogee Beach. Built in 1876 and later operated by the McIvor family from 1901 to 1922 until the Randwick Ladies Amateur Swimming Club was formed and took over the lease. It’s been a women-and-children-only pool for almost 95 years, the only one of its kind in Australia with an exemption under the NSW Anti-Discrimination Act. The pool is short (just 20 metres) and the steep decline means it’s not easily accessible for everyone. But it’s a haven for many women who seek privacy while bathing.

Most rock and beach pools are situated to offer some protection from the sou’westerleys, but not Mahon; built in 1932, the 33-yard pool sits on a rock platform overlooking Lurline Bay and has been dubbed the “impossible” pool because it’s at the mercy of the waves which crash into it at high tide and can carry swimmers off course. The Sydney Swans regularly use the pool for recovery sessions. 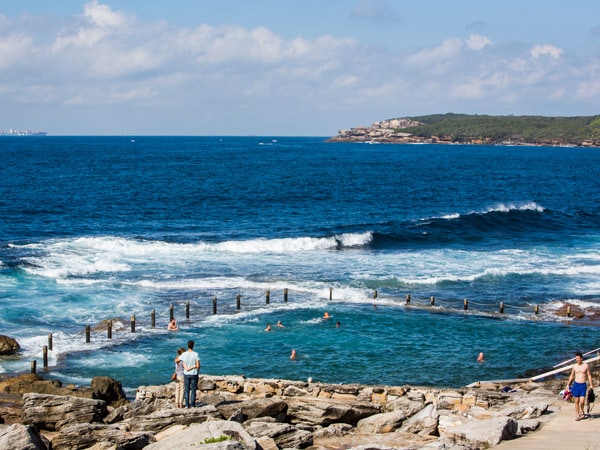 Mahon Pool in Maroubra is so wild that it is known as the “impossible pool”. (Image: DNSW)

The Victorian elegance of this corrugated iron and painted cream and green wooden pavilion tucked below Balmain’s sandstone cliffs makes it unique among Sydney’s harbour pools. Built in 1883, they were formerly called Elkington Park Baths but were renamed in honour of the Olympic champ, who lived nearby and learnt to swim there.

It is the oldest harbour pool in the southern hemisphere and was the home of Australia’s first swimming and water polo clubs. There’s a pontoon of diving blocks at one end which allows 50-metre laps. The heritage-listed pool reopened in September 2021 after an $8 million heritage refurbishment that included water polo lights, new boardwalks, solar panels and engineering works to lay new foundations and to raise the decking floor to combat the effect of rising sea levels. 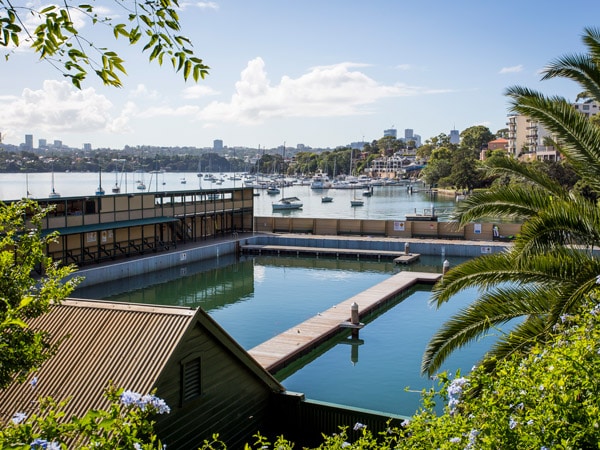 The heritage-listed Dawn Fraser Baths in Balmain is beloved for its Victorian elegance. (Image: DNSW)

The Andrew (Boy) Charlton Pool underwent a $10 million upgrade in 2000 to include two heated saltwater pools, as well as a toddler and learning pool and entertaining facilities. Today, the 50-metre pool is popular with both serious lap swimmers and those who prefer to soak up the sun on the wooden deckchairs and enjoy the views out over Woolloomooloo Wharf. Find it tucked away on the edge of the 34-hectare Domain parkland on the eastern fringe of the city centre. 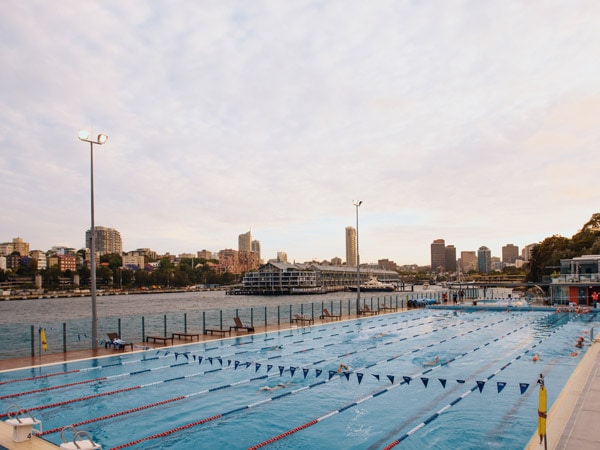 The Andrew (Boy) Charlton Pool is tucked away on the edge of the 34-hectare Domain parkland. (Image: DNSW)

Located on the western side of Cremorne Point on Sydney’s North Shore with stunning views taking in the Harbour Bridge and Opera House, MacCallum Pool was originally a rock pool created by residents as a safe harbour swimming hole, then reconstructed in the 1920s above the high water mark. Although the historic 33-metre pool is small and narrow (just two lanes wide) it’s long enough for laps and is ringed by a wooden boardwalk with plenty of shaded spots to take in the sights of the harbour after a dip. 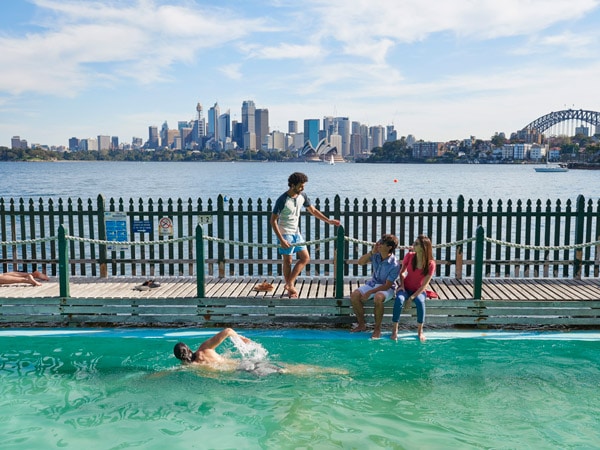 Reached from the promenade linking Manly and Shelly beaches on the Cabbage Tree Bay Eco Sculpture Walk on Sydney’s Northern Beaches, this small but well-maintained pool hasn’t changed hugely since it was built by local residents in 1929. It’s a roughly triangular shape, with its longest side – about 30 metres – adjoining the promenade. Note the Sea Nymphs sculpture that sits on the pool’s outer edge and continue around to the next headland to find the 50-metre Freshwater Rock Pool, which opened in 1925 and was the first ocean pool built on the North Shore. 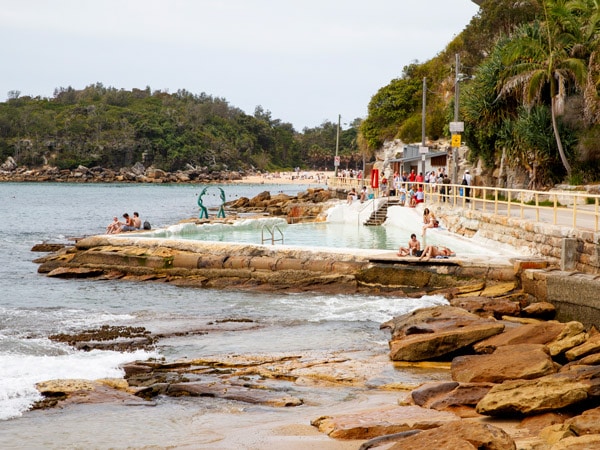 Fairy Bower rock pool in Manly is a small but idyllic pool to visit. (Image: DNSW)

Built during the depression, North Narrabeen is large by rock pool standards, but a 50-metre eight-lane swimming area has been sectioned off with a timber boardwalk in the southwest corner and there is also a wading pool for children. The sandy bottom means there are no lines to follow for laps. There are showers by the cliff on the pool side and changing rooms and toilets nearby. The pool is home to three amateur swimming clubs and also has a free learn-to-swim summer program for anyone aged six to 70. 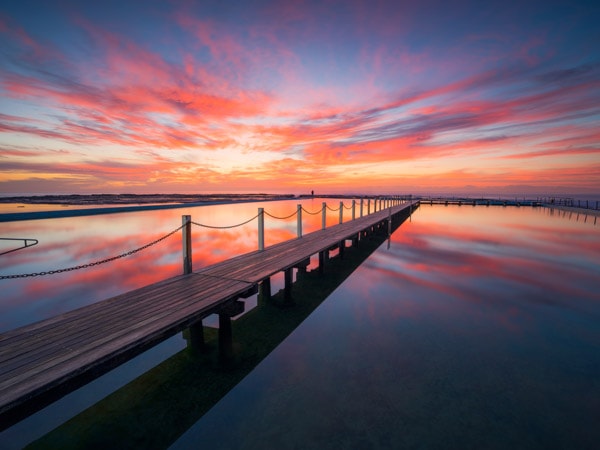 The North Narrabeen Rock Pool was built on the Northern Beaches during the depression. (Image: DNSW)

Located at the southern end of Palm Beach with sweeping views back to Barrenjoey Headland and its famous sandstone lighthouse and up towards the Central Coast, Palm Beach rock pool is just the right length, 50 metres, and has an amenities block. It’s a favourite training place for participants in the annual Palm Beach to Whale Beach swim. 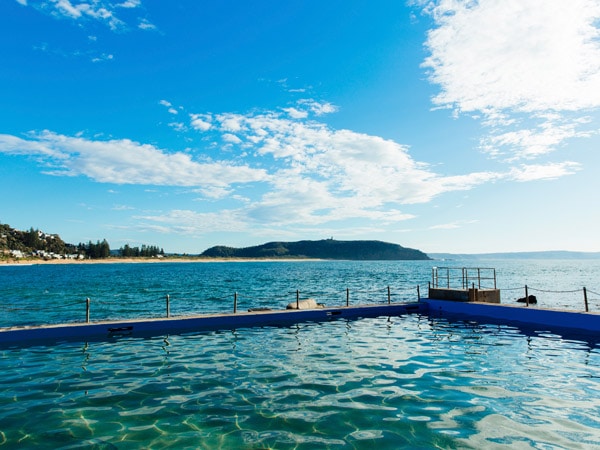